Ireland
Share
Tweet
The workers at Waterford Crystal have occupied the factory in response to the threat of making 480 workers redundant. They have the full backing of working people locally. This struggle is an indication of the growing militant mood of Irish workers.

It’s only a week or two ago since we predicted that the current crisis in Ireland would unleash a whole series of defensive struggles as the bosses attempt to make us pay for their crisis. The fact is that although the Irish economy is rapidly heading towards the rocks and Brian Cowen and the bosses are sharpening their knives for cuts in wages and redundancies, the Irish working class was immeasurably strengthened during the years of the so called Celtic Tiger. As the saying goes you can peel an onion layer by layer, but you can’t skin a tiger claw by claw. 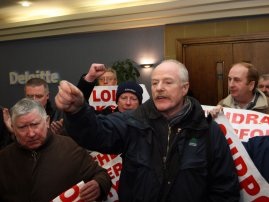 The occupation of Waterford Crystal is solid with some 300 workers involved. Photo by eirigi.

Events in Waterford are a prime example of this. The threat of 480 redundancies, and just as importantly the resulting loss of 300,000 visitors every year, has generated a clear and determined answer from the Waterford workers and from the working people of the area.

The initial reason behind the occupation was the threat by the receiver David Carson to make 480 workers redundant. The likelihood being that shutting the factory down for a time (while negotiations continued with two US companies KPS and Clarion Capital – who have the ex Chief Exec of the company on board) would give the bosses free reign to employ whoever they chose. The negotiations, which have included the Taoiseach’s department, ICTU and UNITE – who organise 90% of the workforce, appear to have been quite thorough with a bid having been put in by Clarion. But the occupation is solid with some 300 workers involved. 800 current and former workers attended the meeting to discuss the current state of play and in particular the effect on their pensions of the current crisis. The Irish government may be liable to underwrite the pensions as a consequence of their failure to implement a pension protection agreement made by the EU.

It is apparent that the workers have mass support as is clear from the attendance at Saturday afternoon’s rally which was attended by 2,000 people. It is also obvious from the food and supplies that are being shipped in from outside. The mood is an angry one and rightly so. The most likely outcome of a capitalist buy out will be the gutting of the company and the asset stripping of all the profitable bits of the business. 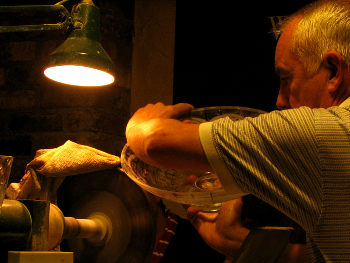 A call for the nationalisation of Waterford Crystal under workers' control would be a harsh blow to the Irish bosses. Photo by ali san on Flickr.

At the same time however, the risk remains that the bosses could try to undermine the occupation. The union leaders are correctly, involved in negotiations with the receiver, but deals over redundancy and pension guarantees (particularly for the older workers with the longest service) could have the effect of weakening the movement unless the union takes a clear position. At present the main thrust of the union seems to be to attract a new buyer. Some weasel voices have already begun to complain about the worker’s action, saying it will have a negative effect.

But, Waterford is stacking up to be a battle. There’s a strong and militant response from the workers, an unpopular government who’ve just bailed out the banks and a bunch of asset strippers. It is frankly no surprise that the idea of nationalising the company has gained an echo. After all, they’ve just nationalised Anglo Irish Bank.

This occupation represents a crossroads for the Irish Trade Union movement and the working class. A clear call for the nationalisation of the company under workers’ control and management backed up by the full support of the working class would strike a blow at the plans of the Irish bosses. It would represent a beacon to the whole movement in Ireland and would have a big effect internationally.