Ireland
Share
Tweet
Ireland has been hit hard by the credit crunch. The country has gone from one of the highest rates of growth to bust. The government is being forced to intervene with guarantees, but as could be expected they are aimed at sustaining the rich not the ordinary working people.

The Irish economy is officially in recession. The housing market reached a pick in the first months of 2007 and then started to fall, dragging with it other sectors of the economy. And last week the Irish credit system was about to collapse. Until last year, Ireland had the fastest growing EU economy. Now it is experiencing the worst fall. The Irish government has had to finally intervene and take emergency measures. Other EU countries could follow soon. 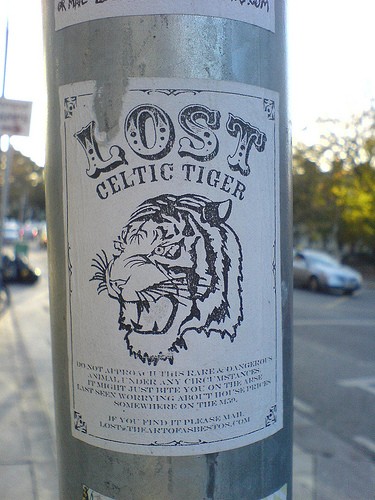 Dáil Éireann (the Irish parliament) approved on Wednesday, 1st of October, a €400bn guarantee that will cover banks liabilities - retail, commercial and institutional deposits in addition to deposits from other banks sourced in the interbank markets. The Credit Institutions (Financial Support) Bill 2008 will not guarantee, however, mortgages, personal loans, etc.

The Bill was initially meant to cover six Irish banks (AIB, Bank of Ireland, Anglo Irish Bank, Irish Life & Permanent, Irish Nationwide and EBS building society). However, other foreign owned banks operating in Ireland such as Ulster Bank, Bank of Scotland, or National Irish Bank have applied to be included in the Bill. That could increase the state guarantee to €500bn. The state has so far only imposed one condition, a charge of €1b for the two-year period that the cover will last. That is 0.2 percent of the total. Yet, Irish banks are busy lobbying the government in order to get a reduction to 0.1 percent of liabilities. That is, banks will be able to continue business as usual with the backup of the Irish State, or in other words, on the back of the Irish workforce, whose mortgages and loans are not guaranteed.

The crisis of the Irish credit system had been going from bad to worse in the two weeks that preceded the Bill. On Monday, 29th September, the banks' share value collapsed on the stock market. The Anglo Irish Bank and Irish Nationwide were the most affected and were about to collapse, but it was the whole of the Irish financial system that was in crisis. The minister for finance put it like this to the Seanad (Irish Times, 4 October, 2008):

"(The banks) made it clear to us that liquidity was drying up in the Irish banking system and the maturity dates for the various loans they need to fund their business were shortening all the time and reaching dangerous levels of exposure in terms of time limits."

In a previous press conference, he had put it more clearly (Irish Times, October 1):

"Were liquidity to dry up in the banking system in the weeks ahead, the inevitable result would be economic catastrophe for this country."

The crisis of the Irish credit system has just followed the crash of the Irish housing market. House completions doubled between 2000 and 2006, from 47,000 to 90,000 a year. Prices also doubled, reaching a peak at the beginning of 2007 before starting to fall. The fall in prices has halved the construction of new homes in 2008. Only around 40,000 are expected this year, and the same amount next year. The crisis in the housing market has triggered a sharp increase in the number of unemployed and a generalised fall in retail sales. The number of unemployed on the live register has increased by nearly 100,000 in only one year. The total on the live register now is around 250,000. The government, on the other hand, has just announced that the next budget may involve a €2bn reduction in current expending, a €1.5bn cut in capital expenditure and €500m in tax or PRSI increases (Irish Times, October 4). There are hard times ahead ... for the workers.

The global dimension of the crisis

This is not just a domestic phenomenon. The Irish economy is only a part of the world capitalist system. As days go by, we can see more and more clearly the international dimension of the crisis. Since the mild recession of 2001, the slow growth of the economy in real terms led the channelling of funds into landed property, insurance, and stock exchange speculation in general. What has happened in Ireland is not peculiar to the Irish economy. 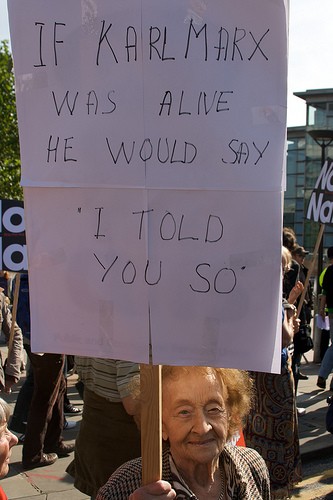 What is remarkable about the last economic cycle on a world scale is the wide gap between real and fictitious capital, particularly in the housing market. First the housing bubble burst, then came the collapse of the credit system. Banks had made huge profits from lending on real estate. It all first started in the US. Two years ago, housing prices reached a historical peak and started to go down. US banks had more than half their assets in real state. The crisis later spread to the UK, Spain, and Ireland. The trend has been the same in nearly all OECD countries.

The bubble of fictitious capital is in fact a product of very low rates of real growth since the crisis of the 1970s. Since then, increasingly lower rates of profits have driven capitalists to introduce measures reminiscent of nineteenth century capitalism. "Neo-liberalism" in the workplace means that staff is reduced to a minimum, overtime is increased, the same people perform multiple tasks, breaks and "idle" time is reduced to a minimum. Rather than investing in improving productivity, productivity is raised by changing work practices and increasing the intensity of work.

Thus we have more exploitation, more productivity, but also more reduced incomes. This easily leads to overproduction because consumers (workers when they are not in the workplace) cannot buy all that they have produced. Speculation has therefore increasingly become the way to make easy profits and expand consumption and production. Capital always flows wherever profits are higher - Finance, Insurance and Real State in the last period. But capitalism has reached its limits. Only cyclical deep crises of the kind we are living now are in sight.

In the UK, Bradford and Bingley was recently nationalised. While they had made £108m profits in the first four months of 2007, they made an £8m loss during the same period in 2008. In the US and the UK, a series of nationalisations of credit institutions have taken place, and the US government is going to bail out the credit system with $700bn.

In Ireland, the government has also decided to go for a bailout of the credit system. Only the Labour Party has opposed it on the grounds that the government has not disclosed the terms and conditions of the Bill. The Labour Party has not gone beyond that point. A recent intervention of a TD (Irish MP) from the Green Party (a minority partner in coalition with the right-wing Fianna Fáil) in the DAIL says a lot about the disorientation of the left in Ireland in this period. He said:

"In a wartime situation, we fight to defend ordinary people and this legislation is about defending ordinary business people, PAYE workers and people on social welfare. Unfortunately, I must support it with gritted teeth because there are a lot of scum, and I state this deferentially in one sense, who do not deserve to be bailed out in this way... Unfortunately, this is the only way we can protect our society."

Bailing out "a lot of scum" in order to protect "ordinary people"? That is not different from the reasons Sinn Fein gave for voting the €400bn subsidy. They confuse the interest of banks and big businesses with the interest of all. With this proposal they simply reveal that they do not have any class-based perspective. The Bill has a clear class content: It guarantees banks' liabilities but it doesn't guarantee the mortgages and loans of "ordinary people".

The right wing, on the other hand, reveal more "pragmatism" when it comes to defending their class interests. The conservative Fianna Fáil, in power, had even considered nationalising banks in difficulty. Last week the Irish government considered the possibility of allowing "one of our six financial institutions - or perhaps even two - to become insolvent and be nationalised." (Sat, 4th October 2008, page 18). Yet, they feared that nationalisations could create distortions of competition between Irish and EU banks. In the end, they decided just to subsidise the big speculators and loan sharks.

The housing crashes and credit crunches that have followed in Ireland and in the OECD are not accidental or merely domestic problems. They are connected because of the global tendency of the gap between real and fictitious capital to grow, and, ultimately, because of the anarchy of the market economy. A tight regulation of the Irish housing market, as the Labour Party argues for in Ireland, might had avoided the housing crash. Yet, if billions had not been invested in housing in Ireland they would have moved elsewhere. There was no way to avoid the recession within the parameters of the market economy. Now, even right-wing governments are declaring that the credit system must be tightly regulated, but it is not clear how the regulation of the credit system is going to come about. They do not say.

But of course, there is an alternative to bailing out the credit system. That alternative is full nationalisation. The governments of the UK and the US have already nationalised some credit institutions. That is a partial nationalization of the credit system. They are doing it, however, in order to save the "scum" that have provoked the crisis in the first place. That means that the poor must subsidise the rich, and, when the rich recover, what has been nationalised will be privatised again.