Details
Editorial Board of The Plough
04 February 2009

Ireland
Share
Tweet
We publish the Editorial of the latest edition of The Plough, which reports on the occupation of Waterford Crystal. 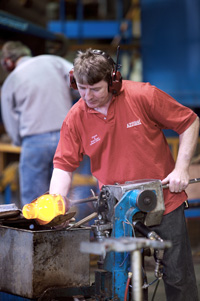 In the midst of recession, layoffs, and cuts in wages the workers of Waterford Crystal have set an example to the rest of the working class movement. They occupied their factory. They did so in righteous anger at the announcement by the Receiver, David Carson, that he was to close down the factory.  That would have meant 480 jobs lost.

Prior to his announcement he brought in extra security guards to prevent any protest by the workers. They failed miserably to stem the surge of angry workers. On Sunday the workers voted unanimously to continue their occupation of part of the plant. The union, Unite are seeking support from the Government to ensure that the workers' full entitlements of redundancy and pensions entitlements would be protected if an outside buyer steps in. The sum the union mention is €30 million which compares to €180 million given to farmers and the billions poured into the banks.

The occupation has the full support of the people of the city of Waterford. Bedding food water etc all have been delivered to the occupying workers.

[Originally published in The Plough, E-mail newsletter of the Irish Republican Socialist Party, Vol. 6, No 1, February 2, 2009]