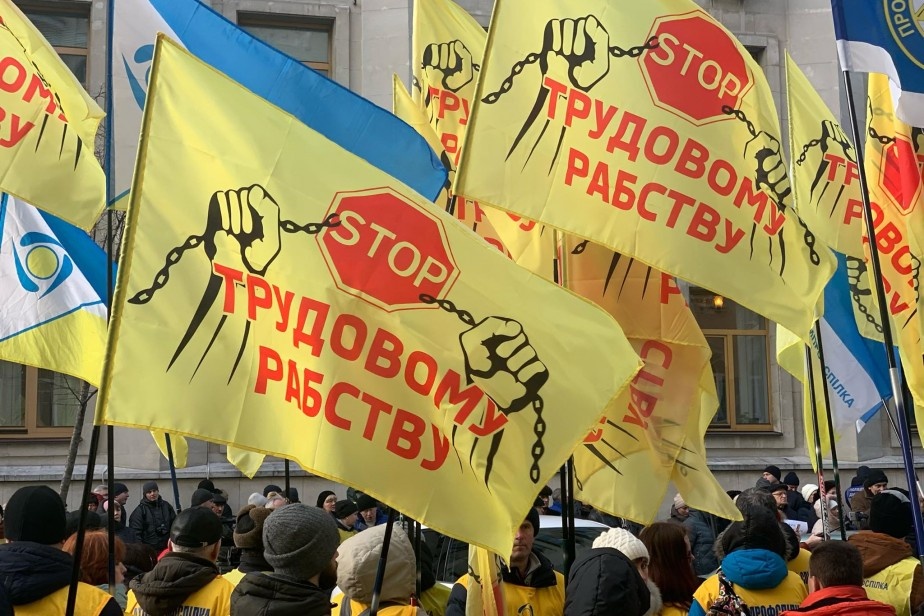 In the midst of the ruination of millions Ukrainians’ lives as a consequence of the Russian invasion, the Ukrainian parliament has been pushing forward the harshest cuts to workers’ rights in the country’s history. On 1 July the parliament passed law #5371, which – among other things – increases the working week to 60 hours, and permits bosses with less than 250 employees to fire workers in the event of property damage caused by military actions or the absence from the workplace for a period of more than 4 months. This came on the heels of several other laws, which curbed trade union rights, legalised zero-hour contracts, and removed the obligation to pay the salaries of workers mobilised into the armed forces.

Then today, Ukraine’s economic advisor to the president, Alexander Rodnyansky, said the country needed to “create the foundations for rapid economic growth”, while also fueling the war effort. To this end, he has proposed a series of “reforms” to “revamp” (i.e. demolish) labour laws, and privatise thousands of state companies. He advocates “liberalisation” around “ease of hiring, ease of firing, severance pay, flexible hours and contracts and fixed-term contracts.” He also suggested scrapping the minimum wage in some industries, reducing paid leave, and selling off assets. In short, he advocates a slate of attacks on workers’ living standards, pay and conditions.

This exposes the real nature of the Ukrainian government. It is a servant of the interests of the capitalist class – both of a section of the traditional Ukrainian oligarchy and of international capital, which is eyeing up the chance to profit off the Ukrainian working class after the war.

Zelenskiy and Servant of the People

As we explained following the 2019 presidential and parliamentary elections, the Servant of the People (SN) party achieved a record majority principally through an anti-Poroshenko vote – against Poroshenko’s nationalism, the continued war in Donbass, and the generally worsening economic situation. Zelenskiy and many upstart deputies of the Servant of the People party technically lacked experience in prior oligarch-led governments. But one cannot repair a house with a new coat of paint alone. The structure of Ukrainian capitalism remained unchanged, while the policies of the Zelenskiy government were a continuation of those of Poroshenko’s right-wing, post-Euromaidan governments. 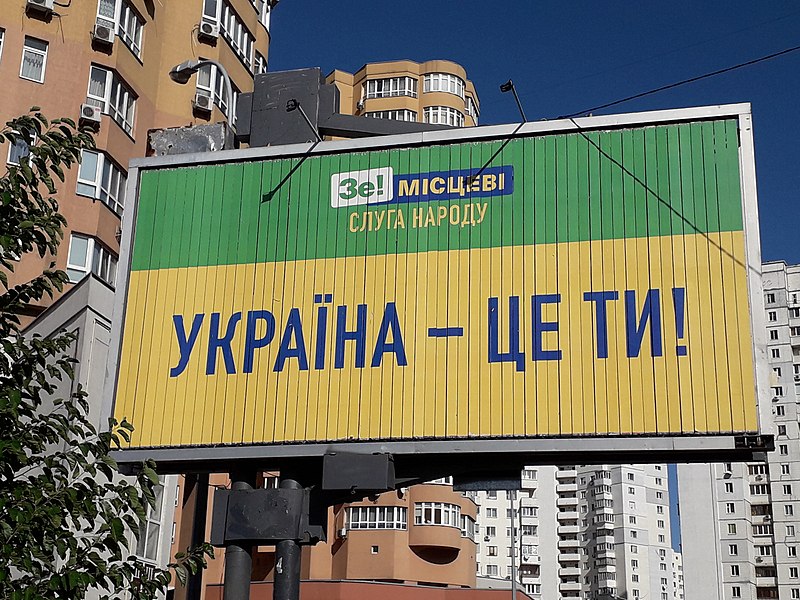 The Servant of the People (SN) party achieved a record majority principally through an anti-Poroshenko vote / Image: Tohaomg

Much of the success of his career, Zelenskiy owed to his close links with the Kolomoisky oligarch clique, whose media empire produced his televisions shows. However, as soon became clear, Kolomoisky was not the only influence on Zelenskiy and SN. Rapprochement with the US embassy in Kyiv had begun in advance of the elections.

This was reflected in public statements addressing “potential investors”, in which Zelenskiy boasted about the future of favourable conditions for them to pay low wages to “hardworking Ukrainians”. Though Zelenskiy was able to keep wages low, in the wake of the global capitalist crisis and the general internal instability in Ukraine, this did not magically attract investors. The budget of the government in the end had to rest on foreign loans rather than increased investment, thus further increasing the burden of future repayments.

The point is, the present attacks on workers rights are not new policies brought on as a result of the war, but were already being pushed in 2019. Although a proper workers’ opposition does not exist in Parliament, and the Communist Party was effectively pushed out of mainstream politics in 2014, some parties of rival oligarch fractions including Opposition Bloc (the remnant of the Party of Regions) and the party around opposition blogger Anatoliy Sharij, although they are not necessarily ideologically opposed to the anti-worker laws of Poroshenko and later Zelenskiy, have at least shown opposition in words and parliamentary votes. These parties and their allies in the media were already facing repression before the February invasion began. The invasion was very quickly used to block their activity as much as the government could.

The response of the Ukrainian labour movement

The new labour laws have been widely condemned by the Ukrainian labour movement. Before the COVID-19 lockdown period, there was an increase in class struggle, notably with the miners strikes in the Kryvbas region, as well as healthcare workers, protesting the liberalisation of their industry. 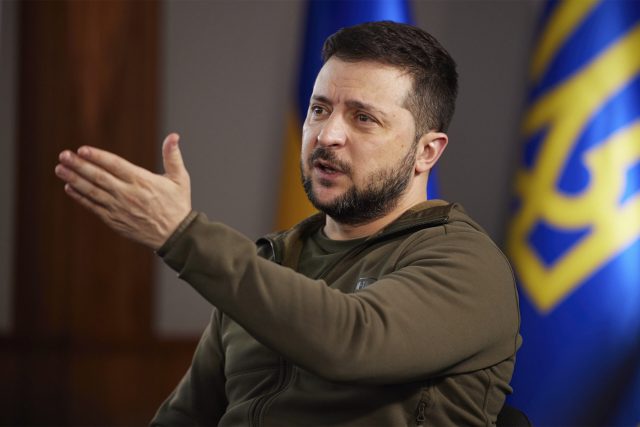 The organisations that have the greatest power over Zelenskiy are the IMF, WTO / Image: ZUMAPRESScom

However, the labour movement has proved unable to stand up to the government amidst the period of war. This is both a result of the authoritarian measures being put forward by the Zelenskiy administration prior to and during the Russian invasion, but also flows from the general tactic of the labour movement leaders of negotiation and class collaboration with bosses and employers.

“The labour code will no longer apply, collective agreements will be eliminated, and even those mechanisms of employee protection that are in place today will not work. This is a brazen violation of international norms and standards in the field of labour.”

But this is the problem with relying on the concept of ‘international norms’. The organisations that have the greatest power over Zelenskiy are the IMF, WTO, along with domestic and international capitalists.

The workers pay for the war

The week before the 24 February invasion saw a significant exodus of Ukraine’s rich – a migration that Zelenskiy publicly defended as he attempted to play down the possibility of an invasion actually occurring. He has come out against Russia-tied Medvechuk and Donbass kingpin Rinat Akhmetov. But this does not alter the fact that it is the rich capitalists that dominate Ukraine’s economy; just as Putin’s pursuit of Khodorkovsky and Berezovsky didn’t fundamentally change the fact that that country is also dominated by a wealthy capitalist oligarchy. Now, while most of the Ukrainian super-rich sit in fancy European resorts and comfortable London homes, the Ukrainian working class is being forced to pay for the war with their lives, destruction of their homes, and worsening working conditions.

The ‘national unity’ that the Zelenskiy administration projects is what Trotsky described as “the unity between a horse and its rider”. The ruling class, while their millions of dollars worth of assets take a hit in the destruction of the war, are able to sit a safe distance from the conflict, while the working class has to do the fighting and continue showing up to work whilst Russian air raids threaten their cities. As a reward, they are seeing what was left of their labour rights smashed by the Ukrainian parliament, loyal to domestic and foreign capitalists.

The reactionary Russian invasion, having thrown the working classes across the borders into a panic, is allowing the Ukrainian ruling class to consolidate its power over them. An international movement of the working class, independent of the capitalists, is necessary to elevate the workers out of their demoralisation, and to build bonds of international solidarity against this shameful imperialist conflict and their own ruling classes, which are striving to reap every last coin from it.