Last Sunday, Servant of the People, the parliamentary party of Ukrainian President Volodymyr Zelenskiy, swept the elections, gaining 254 out of a possible 424 seats. This represents one of the largest parliamentary majorities ever, but with another record low turnout of less than half of potential voters.

This is not surprising, since no left-wing candidates ran, given the past several years of state repression against them, particularly the Communist Party of Ukraine. Another factor is that many more voters are working overseas due to Ukraine’s weak economic situation, even relative to poor Eastern Europe, among whom Ukraine is now the poorest country, with the GDP per capita now lower than Moldova.

Poroshenko’s bloc – renamed after May’s presidential defeat to “European Solidarity”, based on his promise to get Ukrainian closer to EU membership – won only 26 seats from 132 in 2014 (total votes down from 3.4 million to just over 1 million). This again confirms the hatred the Ukrainian people had for his government, as expressed in opinion polls. Even the majorities in his strongholds in the western districts during the presidentials almost all evaporated, although this is still where he got most of his support.

The sad irony is that Zelenskiy's programme represents a continuation of Poroshenko's policy of privatisations and austerity in the interest of Ukrainian oligarchs, while bowing and bending to the pressures of US imperialism. This is a line that he has not really strayed from, before nor after the election. In a recent English-language video aimed at Western capitalists, Zelenskiy highlighted his desire to “deregulate” industry and how the potential investors could “make money both internally and externally” from Ukrainians. The external part is clearly aimed at those EU companies currently looking for more Ukrainian migrant workers they can pay a pittance to work in miserable conditions.

The main reason Zelenskiy’s party won, however, was not because of the right-wing economic programme, which Zelenskiy only revealed when asked but did not really campaign on. If anything, he was as confusing as possible on these kinds of subjects, saying that while it is “cool” that Stepan Bandera is a hero for some Ukrainians, that they should not name streets after him. The main reason was the apparent breath of fresh air Zelenskiy represented relative to Poroshenko and his previous government. He is a famous TV comedian who made the Ukrainian political apparatus the target of his comedy (despite the abstract politics expressed in it). Furthermore, he did not use the same right-wing nationalism Poroshenko based his campaign on, which got him support from many Russian-speaking and bilingual Ukrainians determined that Poroshenko had gone too far. And most importantly, they are tired of the civil war and all its effects, and it helped that Zelenskiy was not openly for it, saying that he wants to negotiate in some way.

The People’s Front, the parliamentary fraction initially in coalition with Poroshenko and containing many far-right and neo-Nazi deputies, like parliamentary speaker Andriy Parubiy and Azov Battalion leader, Andriy Biletskiy, did not run in the elections as a party and officially no longer has seats. The problem for them was that Poroshenko out-manoeuvred them on right-wing, nationalist rhetoric, which is also reflected by the fact that Parubiy and a few others ran on Poroshenko’s ticket. A handful of others were elected as independents in individual constituencies.

The Opposition Bloc had a recovery relative to the 2014 election in terms of MPs, seats and votes, with 13 percent of the vote share. This is mainly due to the reduction in the anti-opposition bloc mood compared to 2014. Although they gained some traction from anti-Poroshenko rhetoric, their oligarch links are clear and left-inclined voters correctly do not trust them. Yulia Tymoshenko’s Fatherland party continues to tread on, with about the same result of 8 percent. For both of these parties, Zelenskiy’s majority means that he does not need to ally with them to form a government, opening the door for some of the deputies in these two parties may defect. 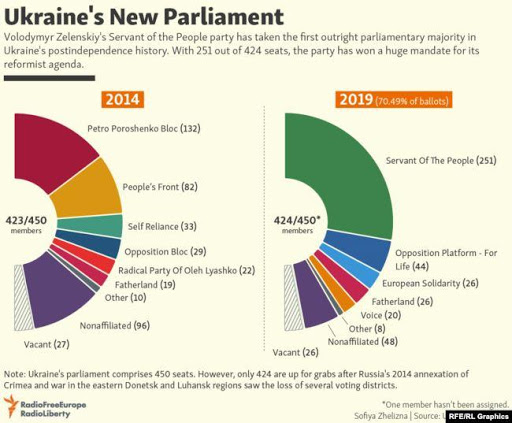 The myth of Zelenskiy’s fresh faces in parliament

Many of the Servant of the People parliamentarians are ex-functionaries of previous political fractions – such as former Party of Regions functionary Dmytro Razumkov – who is the leader of the parliamentary fraction. This could only be done to a certain degree however, since they needed to go up against existing parliamentary fractions and maintain a veneer of being against the current order. Like En Marche in France, they had to fill the lists with candidates who have no political experience and furthermore ones with some dubious backgrounds.

While Radio Free Europe has praised this as somehow clearing the Ukrainian parliament of corruption, the fact remains that these people have no political ideology of their own and are most likely just happy to have a nice parliamentary job with all its benefits. Their lack of any ideology will also just make them lackeys to the Kolomoiskii oligarch clique, who financed the party and all the political functionaries who selected them for their roles. This very much mirrors the role of Zelenskiy himself. Although many oligarch cliques in recent history have conducted massive corruption, Kolomoiskii’s is close to the top of the list, having profiteered from the civil war, and conducted a number of seizures of state assets, including operations where he was able to sue the Ukrainian government for millions.

How stable will the Zelenskiy parliament be? 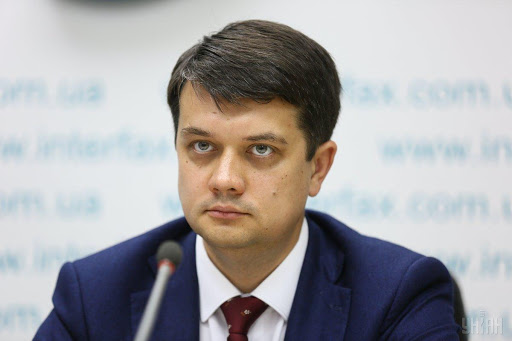 Dmytro Razumkov – leader of the Servant of the People parliamentary fraction / Image: unian.info

So this landslide victory for Zelenskiy, while allowing his party a lot of freedom to push through their policies, is built on a very weak foundation: the Ukrainian economy in the middle of global economic turmoil. Zelenskiy may be able to balance the interests of some of Ihor Kolomoiskii and other oligarchs with those of the US and other foreign capitalists, but this will come at the cost of continued attacks on the living standards of ordinary Ukrainians, which are already quite low.

Furthermore, the smokescreen of nationalism used by Poroshenko to push through his austerity is fading, and the majority means that Zelenskiy's people will take the brunt of the blame. While nobody will represent the interests of Ukraine’s workers in parliament, a rise in the class struggle and an increase in spontaneous strikes and walkouts during the next period are likely.