On 2 February, the Ukrainian president issued sanctions on three of the most popular television news channels in the country. Media outlets getting shut down is nothing new in Ukraine, ever since the Euromaidan brought a right-wing government to power in 2014. However, the recent events represent the most concerted move to shut down opposition media in Ukraine’s history.

Ukrainian independence brought an end to Stalinist control of the media but brought its own evils not seen before. The entire media sphere was taken over by the different rising oligarch clans. A number of journalists and whistleblowers in the ‘90s, who were reporting on the mass looting of state assets by these clans, were threatened and killed. Independent media sources were relatively rare, with most having to rely on oligarch, state or western agencies for funding, all of which came with implications for what politics they can present.

The events of the Euromaidan in 2013-2014 were fuelled by the orientation of the Ukrainian media, especially the western-financed online channel Hromadske. Here, both anti-Yanukovych (Poroshenko, Kolomoyskyi owned) and previously Yanukovich-allied media (Akhmetov, Firtash) allied against the president, isolating Yanukovich and helping force his flight. In the weeks following, the offices of a public broadcaster were raided by far-right forces. The Communist Party of Ukraine’s (KPU) headquarters in Kiev, which published their own nationally distributed newspaper, were burned down by Right Sector, one of the far-right paramilitary movements emerging at this time.

The civil war in the Donbass and the Russian takeover of Crimea, and Poroshenko’s election brought in an era of pro-war patriotic media. Russia-owned channels were banned, along with the banning of two of the most popular social media platforms in Vkontakte and Odnoklassniki. Additionally, opposition media like the paper Vesti were attacked by far-right militants. A number of journalists opposing the war, like Ruslan Kotsaba, were arrested. In 2015, Oles Buzina was murdered in front of his home by far-right thugs, after his personal information was published on the government-sponsored Mirotvorets website. A report from the International Federation of Journalists showed that murders and attacks on journalists rapidly increased from 2014-15. Despite this, Washington think-tank Freedom House upgraded the rating of the internet and press in Ukraine to “partly free” in September 2015.

Eventually, this patriotic hysteria gave way to mistrust in Poroshenko’s government and allied media, especially as the living standards of Ukrainians fell, while Poroshenko’s fortune grew. Opposition media re-coalesced, mostly around the resources of opposition oligarchs but also some independent online sources. The opposition media’s popularity also increased. The landslide election win for Zelenskiy in 2019 brought some hope to many Ukrainians. Although he was backed by the clan of oligarch Ihor Kolomoyskyi, his charisma and reduced reliance on nationalism compared to Poroshenko led him to be considered a “re-unifying” alternative.

There was indeed some relief after Zelenskiy’s election, but this rapidly changed as Zelenskiy revealed himself to be continuing Poroshenko’s policies of austerity. As we wrote in 2019, Zelenskiy’s political programme was almost the same, as was his eagerness to comply with imperialist backers. Ukraine took on more IMF loans while continuing a policy of privatisations, notably changing the land ownership laws to favour foreign buy-ups. The situation was worsened further with the coronavirus crisis, in which the health system (increasingly privatised in recent years) is struggling with providing basic protections to health care workers. The US government has pressured the president to reject buying the Russian-made COVID-19 vaccine, making Ukrainians wait longer for the US-produced version. Various members of Zelenskiy’s Servant of the People party brought into national and local governments have proved to be incompetent and/or crooked, leading to a setback in the fall local elections. 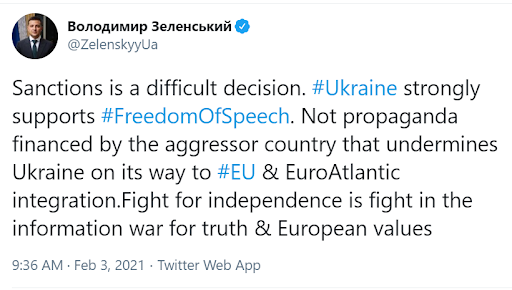 Zelenskiy’s popularity has plummeted to Poroshenko levels. A December poll showed only 32 percent of people were satisfied with Zelenskiy, with 65 percent of respondents dissatisfied, while 60 percent supported the idea of the government's resignation. A September poll showed his approval rating at 32 percent. This explains why the man some had praised as a sort of libertarian clamped down on three of the most popular opposition news channels: ZIK, NewsOne, and 112 Ukraine. The failures of the government and the suffering of ordinary Ukrainians were being broadcast on their airwaves. On 2 February, they were taken off the air by presidential decree, with only their online versions available. Furthermore, another opposition station, Nash, was attacked by neo-Nazis from the C14 group, who were clearly given confidence by the government initiative against opposition media.

The rationale of Zelenskiy was that this action was against propaganda by the aggressor Russia, the order stipulating that “putting under question the competence of the government” was part of this. Not surprisingly, these “propaganda channels'' happened to include the most popular news channels in the country (see chart). For Zelenskiy, “truth & European values'' do not include reporting on the continued selling of Ukraine to foreign interests and the mortgaging of Ukraine to the IMF.

Similar to the playbook with the ousting of Yanukovich, only Viktor Medvechuk is spotlighted as an oligarch, while the fact that all of the rest of Ukrainian media is owned by other oligarchs is somehow forgotten, even though many of them have a history with Medvedchuk. The oligarchs, while getting into conflicts with one another, understand that calling for a war against the oligarchy as a whole would come back to bite them. Freedom of speech is also seemingly forgotten by western media, most of whom have written with understanding about Zelenskiy’s actions. Washington has praised it. 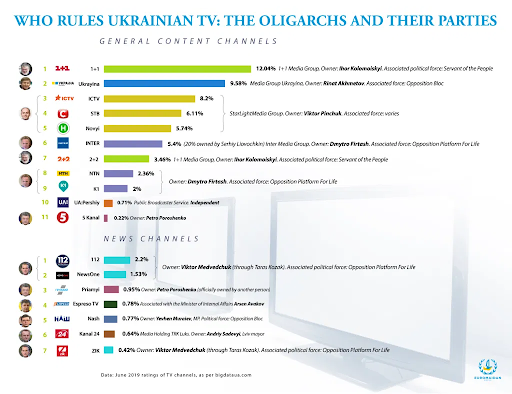 Ukrainian media ratings and ownership as of June 2019 (Euromaidan Press)

However, such a bold act of media repression has not gone completely under the radar, with the International and European Federation of Journalists condemning this move, along with Ukrainian Media Unions. Some MPs from Opposition Platform - for Life, the party associated with the closed stations, have launched impeachment proceedings against Zelenskiy. Speaker of parliament Dmitri Razumkov, was the most prominent member of the government to speak out against the ban.

Zelenskiy’s election landslide of 2019 was a result of anti-Poroshenko sentiment. But the president has shown himself more and more to be the same, in terms of domestic policy, foreign policy and even nationalist jingoism. Many were surprised by this turn against his supposed base in more Russian-speaking central and southern Ukraine. But his base wanted some positive change from the presidency, notably better living standards and a resolution to the civil war, which is draining the state budget. As Zelenskiy was an agent of the Ukrainian oligarch clans and a proponent of the capitalist road for Ukraine, he had to continue down the road of Poroshenko. As Ukraine is a relatively economically weak country. This also forced him under the thumb of primarily US imperialism, upon whom he is more and more dependent.

Zelenskiy cannot satisfy his base by improving the quality of life of Ukrainian workers, so he is pivoting more to the segment of the population for whom economic concerns are secondary to symbolic-nationalist ones. This explains why the government seems to now be cooperating with Nazi thugs from organisations like C14, and the Azov derivative National Corpus: they can do the government’s bidding for cheap when it does not want to be associated with their actions. Of course, in the long run, this is dangerous for him, as he can never be the ideal candidate for the nationalists. The losses from who elected him will always be greater than the nationalist support he can muster.

With this move, Zelenskiy is clearly moving further towards bonapartism, and due to the majority in parliament, to a higher degree than Poroshenko could manage. The Opposition Platform - For Life, might continue to gain more support from this, but polls show they remain far away from surpassing the ruling party. More opposition media is being pushed from the airwaves to the internet, while the Ukrainian public looks to these alternative sources, as they correspond to the hardships they actually suffer.

On the one hand, the state repression will make left activism more dangerous, and make the far-right more comfortable in their attacks. On the other hand, the Ukrainian people have experienced suffering from both the current government and the ones represented by the opposition. More will look for alternatives to all of them. Some of these are turning to the far-right, but many Ukranians are also disgusted by these bands of thugs. The left may not be able to raise its head at the moment, but it can use this time to build among the growing ranks of dissatisfied workers and youth.

Marxists do not have oligarchs or foreign grants on their side, but they do have an alternative road out of the hell facing ordinary Ukrainians: socialism. Join the IMT and join the fight for a socialist future in Ukraine!