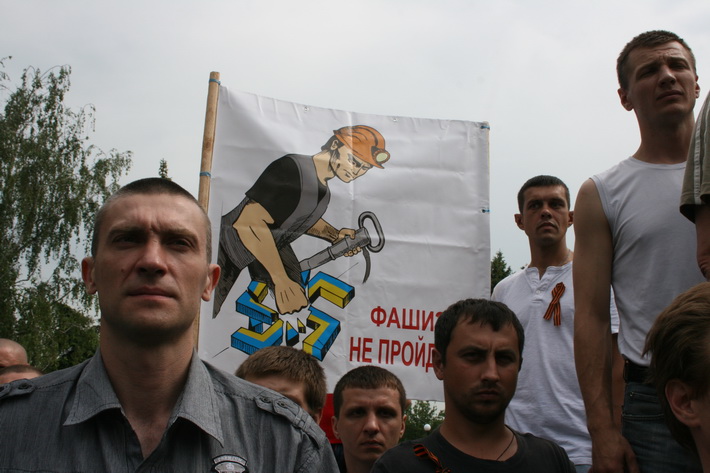 Miners of the Donetsk region stopped work yesterday, starting an all-out strike in protest against the Ukrainian army’s continuing offensive and demanding an end to the “anti-terrorist operation” (ATO) in the region; several pits in the Donbas are taking part already and the strikes appears to be spreading to more mines. Meanwhile, spokesmen of the Kiev government and Ukrainian armed forces threaten escalation of the crackdown, with ATO press-secretary Alexei Dmitrashkovsky stating that the operation will continue “until all terrorists are destroyed or surrender”.

The events follow the presidential elections in Ukraine which saw the pro-Maidan oligarch Petro Poroshenko being elected. While attempting to maintain a moderate and reasonable statesmanlike appearance, the military crackdown exposed his intentions and only reasserted the irreconcilable position of the Kiev authorities regarding the South-East of the country. The Ukrainian ruling class – namely, the oligarchs – is being driven to desperation by the continuing crisis, and it is prepared to make certain concessions. Poroshenko, unlike his closest rival in the elections Yulia Tymoshenko, did not campaign on the basis of a promise of NATO membership for Ukraine, and is said to accept, for the time being, the maintenance of Ukraine’s non-aligned status as a concession to Putin (FT, 27/05/14)[3], as well as declaring an openness to negotiations with Moscow. In turn, the Kremlin has already softened its rhetoric, and foreign minister Lavrov announced that Russia will respect the election results in Ukraine.

Kiev’s reassurances and a diplomatic approach are hinting at a reluctant but necessary willingness to accept Russia’s interests in the region. In return this gives Poroshenko a free hand to intensify the crackdown on the rebellious East of the country, free of active Russian interference, in order to return control over the region to the Kiev authorities and defend the property of Ukraine’s industrialists. This is a pressing question for Kiev as these industrialists own vast complexes of mines, metallurgical plants and steel mills in the Donbas, which have been threatened with expropriation several times by the leaders of the Donetsk and Luhansk People’s Republics.

This prospect of a careful rapprochement with Russia has already reflected itself in the strengthened confidence of the Ukrainian bourgeoisie. Forbes Ukraine is already calling for a Pinochet-like figure to install a “dictatorship of reforms”, capable of carrying out a firm and bloody crackdown in the rebellious regions and implementing radical neo-liberal “shock therapy” to end any “social parasitism” that is perceived to remain in Ukraine.

While Poroshenko is certainly not a Pinochet and prefers to combine bayonets with diplomacy, the aforementioned strategy overall seems to be accepted by the Ukrainian ruling class. Already the government has embarked on a grandiose programme of austerity, with cuts to pensions and tens of thousands of public sector jobs, as well as soaring prices for basic necessities such as food and gas. These neo-liberal reforms are being implemented as part of the IMF bailout programme.

More importantly at the present moment, the military operation against the rebellious eastern regions of the country is in full swing. As we have reported earlier, artillery, fighter jets and helicopters are being used to target the insurgent cities, particularly Donetsk and Sloviansk, causing many civilian deaths and destruction to residential areas. Intense fighting over the Donetsk airport was a major episode of the operation, with ATO spokesman Dmitrashkovsky cynically boasting of over 200 dead on the side of the People’s Republic’s forces. It is following these events that the Donbas miners have taken indefinite strike action, demanding an end to the crackdown and a withdrawal of Ukrainian armed forces.

It is worth reminding ourselves that, since the beginning of the crisis several attempts have been made by the oligarchs to woo the working class, or at least maintain the illusion of workers’ support by staging so-called strikes supposedly in support of either the Maidan or the new authorities. In the run-up to Yanukovich’s expulsion, several “strikes” were either completely fabricated or ordered by the directors of enterprises. More recently, Rinat Akhmetov, the richest oligarch in Ukraine and the owner of much of the South-East’s industry, has called for his workers’ to mobilise against the Peoples’ Republics who are threatening him with expropriation – a call which ended in complete failure.

Today, on the other hand, we see genuine strike action on the Donbas miners’ own initiative. This industrial action is in a similar vein to the Luhansk miners’ strike in April, which demanded wage increases as well as the reinstatement of workers who were sacked for taking part in protests in Luhansk.

Following the beginning of the strike on Tuesday 27 May, this morning (28 May) several hundred miners demonstrated in Donetsk, carrying Donetsk People’s Republic’s flags and chanting the slogan “No to fascism in the Donbas!”; one protester is reported as saying: “We do not want to see troops here. Our children are afraid to go on the streets. Our peaceful citizens are being killed, and we cannot simply stand by and watch”.

Another has stated: “I want peace and to be able to work and make money. I want the occupying soldiers to leave and return to their Kiev junta”. Some officials from the “Independent Miners' Trade Union”, such as Mykola Volynko, who is not only a trade union bureaucrat but also a former parliamentary candidate of the nationalist “Batkivshchyna” (Fatherland) party in the 2012 elections, attempt to distance themselves from the events and are very eager to point that they “did not organise this action”. This shows how this “Independent” union has become an instrument of capitalist politics rather than working class representation, specifically linked to Tymoshenko’s “Fatherland” party.

These strikes have a clearly political nature, showing the workers’ rejection of the extreme nationalist and radically neo-liberal Kiev authorities which to them can only mean cuts, deteriorating living standards, and attacks of fascist gangs on workers’ organisations.

This is a development of tremendous significance. If this action was to spread to wider layers of workers it could mean a crucial turning point in events. The most important task at the present moment is to carry these developments further, for the working class to turn the People’s Republics’ words about nationalisation and expropriation into deeds. The expropriation of the oligarchs, starting in this case with Akhmetov’s properties, would serve as an inspiration for workers throughout Ukraine and thus bridge the East-West divide.