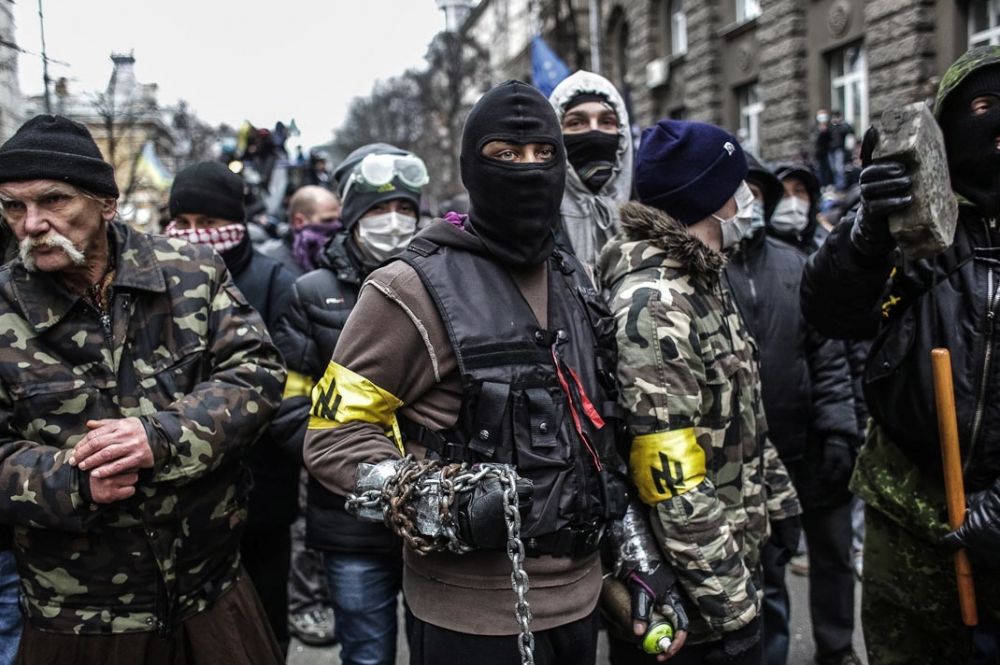 May 26 was the bloodiest day so far in Kiev’s “anti-terrorist” operation where Ukrainian forces used fighter jets and helicopter gunships to fight off rebels who had taken over the airport in Donetsk. This is the clear message the new president Poroshenko is sending to the Peoples’ Republics of Donetsk and Luhansk.

On being elected, he declared that he was in favour of the Anti-Terrorist Operation but that he wanted it to be short and sharp and for the Ukrainian forces participating in it to be fully equipped with the necessary weaponry. MiG-29 and SU-21 fighter jets, as well as Mi-24 gunship helicopters, were used in the operation which left over 30 militia fighters dead. A Donetsk Peoples’ Republic spokesperson said that most of those were killed when trucks transporting wounded fighters to the hospital were attacked by government troops. At least one civilian was killed near the railway station by government artillery fire (See video here) and two more in Sloviansk from artillery fire from government positions (See video below).

An ominous statement from the “ATO” spokesman Vladyslav Seleznoiv  announced today that by midnight all Donetsk rebels will have “surrendered or been killed.” He specified that the location of “all terrorist targets in Donetsk” had been established and that they would be hit with “special high-precision weapons.” This reveals both the cynicism and the increasing nervousness of Kiev faced with the failure of the ATO so far. Cynicism because it is clear, and the experience of Iraq and Afghanistan clearly shows this, that there are no such thing as “high precision weapons” which can hit only “terrorists” and cause no “collateral damage.” Nervousness, because the increasing use of artillery fire, fighter jets and helicopter gunships reveals the inability of Kiev to win this civil war with ordinary troops on the ground - as they have repeatedly refused to obey orders and fraternised with unarmed civilians in the past few weeks. What is being prepared is a bloodbath. Yesterday in Sloviansk artillery fire was used against residential areas, killing one woman near the Pedagogic Institute and also hitting the Psychiatric Hospital. So much for “high precision weapons”!

This kind of action is only going to strengthen the anti-Kiev feeling in both regions. Already on Sunday 25, a crowd of 3,000 people, some carrying red flags, marched on the private residence of local oligarch Akhmetov in Donetsk and wanted to storm it. It was only the presence of the militias which stopped them (See video below). Akhmetov has now left the region and sought refuge in Kiev.

This is the reality behind all the talk of negotiating with the rebels, of an amnesty and dialogue with Russia. As we have explained before, both Germany and Russia have been exerting pressure for a negotiated settlement. German capitalists are openly against sanctions against Russia as they would be hit hardest. They have invested in Russia and depend on Russian oil. On the other hand, Putin has already taken Crimea, which he will not give back, but is not really interested in invading Ukraine to take over Donetsk and Luhansk. His aim in the conflict is a Ukraine in which Russia has a say, as opposed to one which is a member of NATO and is completely aligned with Western interests.

This is the meaning of all the recent talk about a road map towards a negotiated solution. The conditions would be: an amnesty for the rebels, direct talks between Kiev and the rebels under Russian auspices and a federal constitution for Ukraine which would guarantee Russia a say in her internal policies. Putin has already said he welcomed the elections, that he was withdrawing troops from the border and Foreign Minister Lavrov said he was prepared to talk to the new Ukraine president.

In effect Putin has sold out the rebels who had the illusion that he was going to come to their rescue. Understandably, they are not prepared to enter any negotiations unless and until Kiev ceases their military assault. At this point the feeling of many of the rebels would be that too much blood has already been spilled and that they no longer would be satisfied with a federal solution. On its part, the Kiev authorities are attempting at all costs to regain control of the Donbas before any negotiations take place, even if this means a bloodbath.

Meanwhile, the assault on democratic rights continues, as armed thugs assaulted the offices of the city and regional organisation of the Communist Party in Dnepropetrovsk in the evening of May 26. Paramilitary thugs identifying themselves as part of the Maidan 44 Centuria seized the party’s city offices and occupied them.