Brazil
Share
Tweet
After the brutal police intervention in the Cipla factory at the end of May the solidarity campaign has been gaining momentum. On June 13 a rally was held outside the factory with many trade union delegations taking part from Brazil as well as representatives of occupied factories from Argentina, Paraguay and Venezuela. 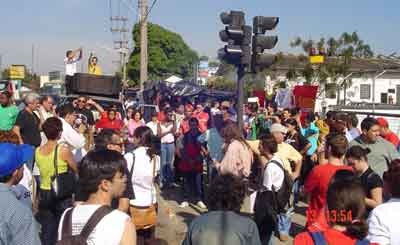 The Cipla company in Joinville, Santa Catarina, has been run under the control of its one thousand workers for nearly five years, during which there have been four caravans to Brasilia and several mobilisations against the threat of closure. And also after the attempts to reach an agreement with the state institutions regarding the debts inherited from the former owners and even after the National Development Bank (BNDES/BADESC) declared that the "company is viable as long as the debt is transformed into an asset through the intervention of state institutions", which is precisely what the workers had been demanding from the beginning of their occupation of the factory.

In spite of all this, the federal judge Dr Oziel Francisco de Souza decided to impose an administrator to replace the Factory Council which had been elected by the workers in assembly. He based himself on a court action promoted by the National Social Security Institute and on an armed forced of 150 men from the Federal Police (linked to the Ministry of Justice).

The whole of the Factory Council and a few other workers chosen at random by the administrator Rainoldo Uessler have received redundancy letters and have been prevented from entering Cipla. Those who are inside the factory are working under a regime of terror, with armed guards patrolling the shop floor and watching the workers, who are afraid of losing their jobs. On top of this, in less than a week, the administrator has already increased the working day to eight hours (working week of 40 hours), when the workers themselves had reduced this to 30 hours a week, in an historic collective bargaining agreement signed by the National Confederation of Chemical Workers (CUT) in 2006. The decision of the judge authorises the "rationalisation" of the company, which could mean its closure.

As an immediate response, the sacked workers and their supporters in the movement of occupied factories set up a tent camp outside CIPLA. A growing national and international campaign called "Hands Off Cipla" has won increasing support for the demand for an end to the military-judicial intervention in the factory and for the reinstatement of the sacked workers.

Rally in front of the company and international campaign

Further to all this, today, June 13, hundreds of people gathered outside the factory during the change of shifts. They represented different organisations and social movements, including an international delegation. Amongst the national organisations represented were the National Federation of Railway Workers (and its unions in Bauru, MT, MS, SE, BA. Tubarao and PR), the Santa Catarina CUT, Sintrasem, Textile and Bus Drivers' Unions from Blumenau, Chemical Workers' Union from Vale dos Sinos (RS), workers from Ellen Metal (Caieriras, Sao Paulo), Landless Peasants Movement MST, Homeless Workers Movement MTST, students and workers from the occupation of the Rectorate at the Sao Paulo University amongst others.

Also present were international supporters. From Argentina, Eduardo Murua, from the National Movement of Recovered Factories, expressed his support. From Paraguay, Cesar Gonzalez, representing two factories occupied under workers' control, gave greetings and support from the CUT-Auténtica. From Venezuela, Francisco Rivero brought warm solidarity greetings from Freteco (Revolutionary Front of Occupied Factories) and warned that the government of Hugo Chávez had declared that it would not keep the commercial agreement which exists between Pequiven (the state-owned petrochemical company) and Cipla, if the company remained under judicial intervention.

The international campaign is also spreading to Britain, Greece, Denmark, Mexico, Spain, Austria, Belgium and Germany, where supporters have made visits to and organised pickets outside the Brazilian embassies demanding a solution in favour of the workers. Other embassies around the world will also be visited by the campaign.

For more information see www.marxist.com and for daily updates on the struggle against intervention in Cipla see the blog http://www.tiremasmaosdacipla.blogspot.com. Please continue to send resolutions demanding the end of the threats against the occupied factories.