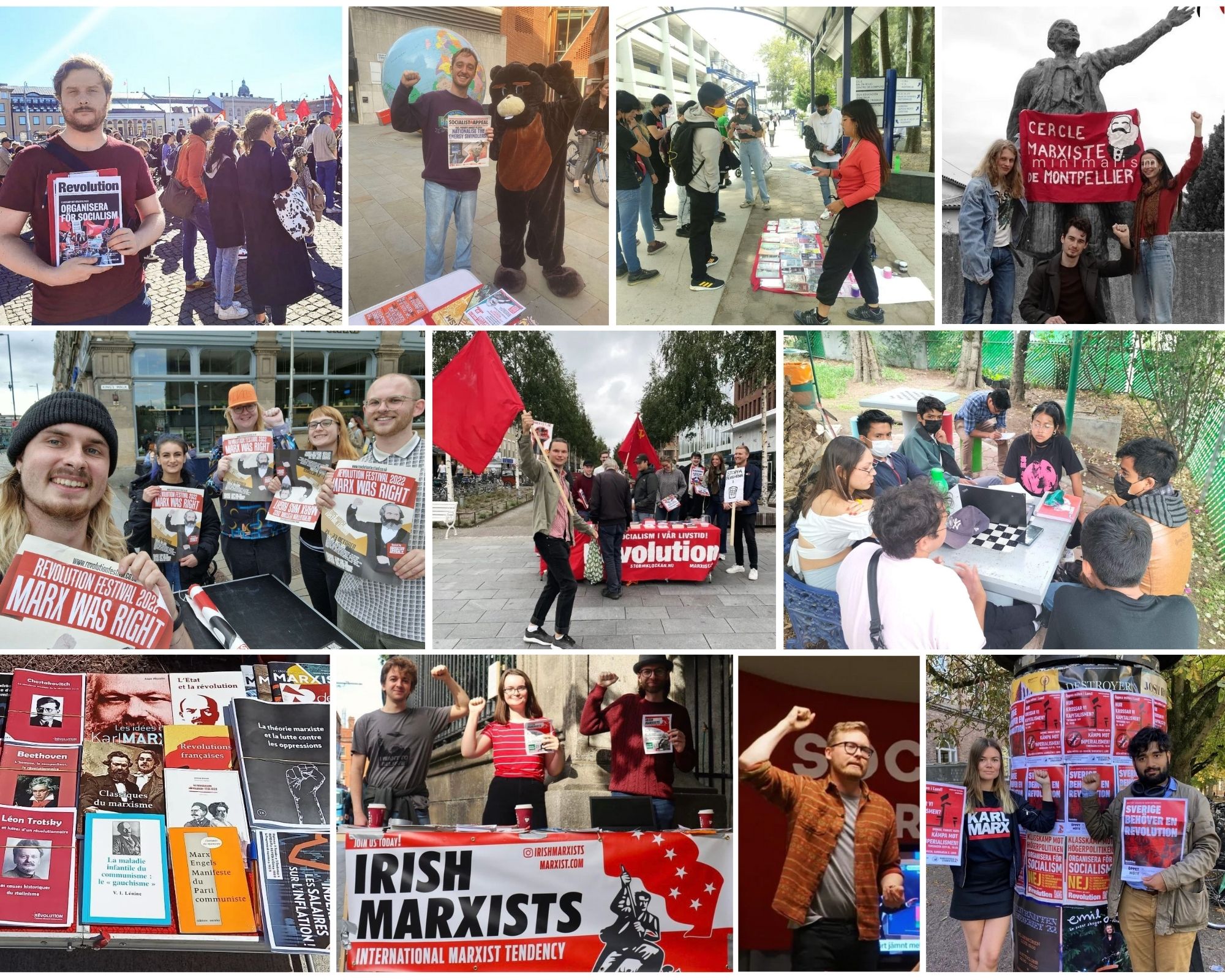 Last week, we published the first of a series of #CommunismOnCampus reports, showing the activities of International Marxist Tendency (IMT) comrades on university and college campuses. We are pleased to say our campaign has gone from strength to strength!

Inspiring reports, images and videos are pouring in from all around the world of students enthusiastically engaging with the revolutionary ideas of Marxism! This year is shaping up to be the IMT’s biggest ever mobilisation among students.

Keep checking social media with the #CommunismOnCampus hashtag and visiting marxist.com for updates on our activities. And if you’re a student, there’s a good chance we have a local youth group: get in touch and meet the Marxists near you!

Last week, the Marxist Student Federation (MSF) in Britain got off to a flying start, with 170 sign-ups in just four universities; students were reportedly actively looking for our stalls in many cases!

MSF comrades carried that momentum with them into this week, establishing a presence at Portsmouth, Suffolk, LSE, Newcastle, KCL, Manchester, Westminster and many other universities. Brand new societies like Falmouth, Hull and Hartlepool got a particularly massive response.

In Newcastle, the comrades completely sold out of papers, revolution youth magazines and pamphlets, showing the thirst for theory that exists among the youth.

Manchester and Sussex signed up over 100 people to join their respective Marxist societies, while around 800 people across the country have been signed up so far (a number that is increasing by the hour).

In Mexico, the comrades of las Juventudes Marxistas (the youth wing of La Izquierda Socialista) have been actively intervening in the student movement sweeping across the country; itself an expression of the general malaise afflicting the young in a system increasingly unable to support them.

At the Instituto Politécnico Nacional, for example, comrades have been participating and promoting assemblies, conducting propaganda campaigns, and organising forums to strengthen the movement.

At the Universidad Autónoma de Querétaro and UAM Xochimilco, regular political meetings are being held on topics such as the crisis of capitalism, and the Ayotzinapa mass kidnapping of 2014. Study circles and literature sales have been organised at FES Aragón UNAM as well, to arm the students with revolutionary theory for future struggles.

Youth activists of Révolution, the French section of the IMT, have been tabling at universities across the country. These include Université Jean Jaurès and Université Capitole in Toulouse; Aix-Marseille Université in Marseille; Paul Valéry University in Montpellier; and Sciences Po and Université Paris Cité in Paris. And this is just the beginning!

Under the banner Cercle Marxiste, meetings of students and staff will be held in the coming weeks to discuss topics such as ‘What is Marxism?; ‘The philosophy of dialectics’, and ‘The economic theory of Marxism’.

As one Révolution member put it: “It is clear the students are thirsty for revolutionary ideas!”

Marxistiska Studenter activists in Sweden have been busy tapping into the increasingly radicalised mood amongst the student layer in the country.

At Umeå University, for example, comrades organised a “Fight back!” meeting in the wake of the general election results; at Karlstad University, the Marxist society is arming students with theory in two separate study circles, on revolutionary tactics and the basics of Marxism; and the Stockholm students are holding a timely discussion on inflation and the need for class struggle.

With Marxist societies also active at Lund University, Uppsala University, Halmstad University and Linnaeus University, it is clear the forces of Marxism are growing at campuses across the country!

What the #CommunismOnCampus campaign has revealed so far is that young people around the world are earnestly looking for a way out of their present bleak situation, and even bleaker future; that is, for a decisive rupture with capitalism.

The reports coming out of Britain are instructive: that students are approaching our stalls already announcing themselves as communists, asking simply “where do I sign?”. It is no wonder, therefore, that the boldest, most revolutionary slogans have continually got the best response.

As this work continues, with the start of the academic year still not fully underway in several countries, we can be sure of one thing: the desire for revolution is thick in the air. Once that mood has been connected with, and linked up from country to country, there is no force on earth that can stop it.