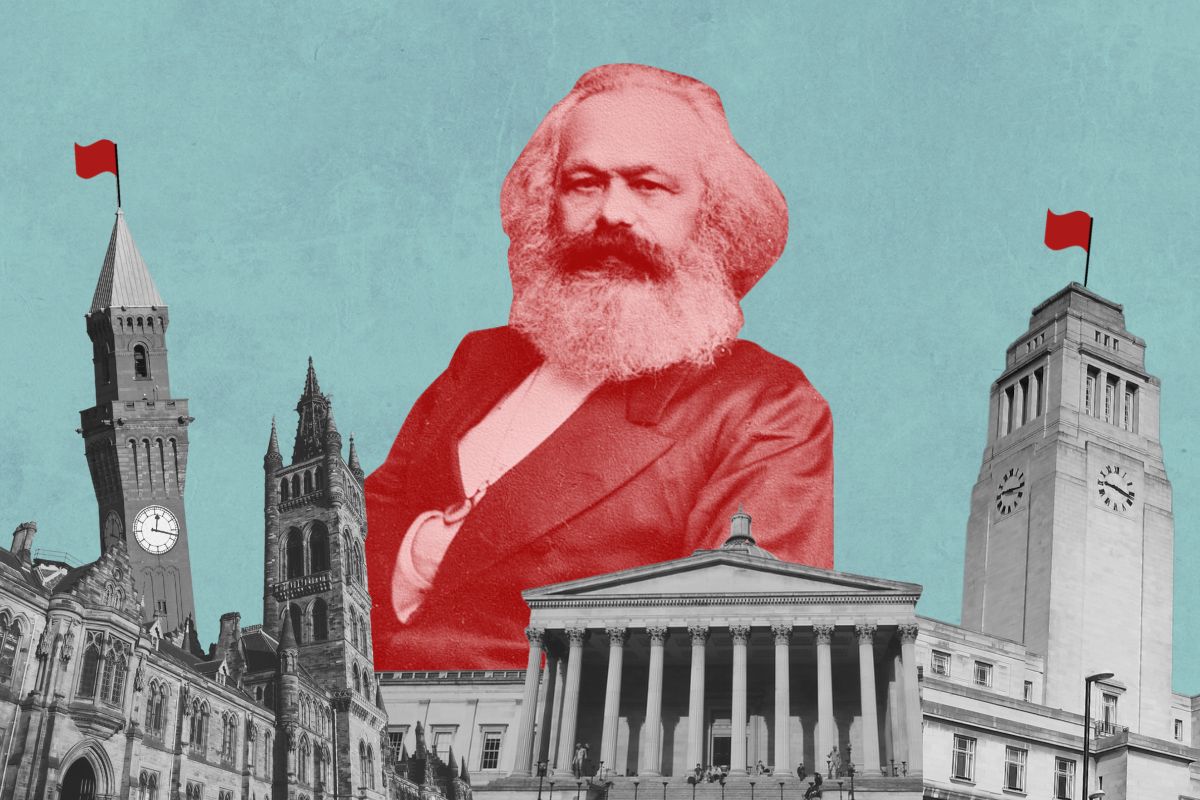 The International Marxist Tendency is out in force as new academic terms begin all around the world. Thousands of students will be signing up to our Marxist discussion groups and societies at universities and colleges from London to Lahore, Texas to Toronto. We will be sharing reports and social media posts of all these activities in the coming weeks: find us with the hashtag #CommunismOnCampus.

“The young really are dangerously socialist” read a panic-stricken headline in the British Telegraph newspaper.

And is it any wonder?

An entire generation has been forged in conditions of increasing insecurity and instability – with young people under capitalism locked out of home ownership; besieged by economic crisis; and witnessing their futures burn for the capitalists’ profit in an ever-worsening climate crisis.

For the youth of today, it is clear that capitalism offers no future, and they are increasingly attracted to the revolutionary banner of communism.

While the representatives of capital despair at the rising radicalism of the youth, the Marxists of the IMT have been connecting with it, establishing a presence on campuses and in student movements around the world.

The comrades of Socialist Revolution, the US section of the International Marxist Tendency (IMT), have tabled at over 20 campuses and club fairs up and down the country, as well as hosting a number of successful student meetings. So far, they have signed up 1,500 people to find out more about the IMT, and they’re only just getting started.

They are also set to hold their first in-person Marxist School event this weekend in Phoenix, Arizona, with the series running until early December in various US cities.

In Canada, activists from Socialist Fightback-La Riposte started the academic year with a bang, intervening at 12 universities so far, with many more events on the horizon. Comrades have hosted pub nights, literature sales and impressive public meetings, including meetings on ‘Capitalism is in crisis: What is to be done?’ with 70 attending at the University of Alberta, and similarly large meetings at UQAM in Montreal and Toronto Metropolitan University.

Marxist societies from coast-to-coast have received a hugely enthusiastic response on campus, a trend which only looks set to continue. In total, comrades sold over 1000 papers and signed up over 1500 interested students – a record for the Canadian section!

In Britain, Marxist Student Federation activists have kickstarted their national campus campaign at Edinburgh and Glasgow Universities in Scotland, and at Brunel freshers’ fair in London – with over 40 still to come! – documenting all student activity on a running blog live from the MSF website.

British comrades have also been spreading the word on campus about the upcoming Revolution Festival in October. With 32 incredible talks on Marxist theory across three days, it looks set to be the biggest one yet.

The Progressive Youth Alliance (PYA) in Pakistan has also been hard at work organising study circles around the country, coming off the back of the hugely successful Marxist School organised last month. Over 200 students, youth, workers and political activists travelled to participate in the event – a hugely impressive feat given the severe economic and political crisis the country faces, alongside devastating floods that have wreaked havoc on the country.

Despite the difficulties, our comrades are determinedly raising the banner of communism.

The following topics were discussed in the school:

The freshers' fair campaign of the comrades of Der Funke/l’étincelle – the Swiss section of the International Marxist Tendency – has got off to a flying start. Campaign preparations were launched at a tremendously successful national Marxist school last weekend at which 80 comrades attended. On the back of that, starting yesterday and continuing today, comrades have been intervening, signing people up at four universities and one teachers' training school.

The comrades have prepared for this campaign systematically, using the same visuals on posters and flyers at all universities, giving the Marxist tendency a distinct branding. The comrades' newspaper leads with a bold message with a simple message for new and returning students: “why you should become a communist today”. Comrades will be discussing its contents with students up and down the country.

This is just the beginning for the Swiss comrades of the IMT, who have further freshers fairs and initial public meetings yet to come, but they already have ambitious plans to establish numerous simultaneous reading circles for on the three component parts of Marxism. This will be a fantastic tool for organising, educating and consolidating a whole new layer of revolutionary student youth.

These are just some of the examples of the exemplary student work being undertaken by members of the International Marxist Tendency (IMT) around the world. Reports have been coming in from Sweden, Denmark, Mexico, France, Italy, Switzerland and beyond on the hashtag #CommunismOnCampus – we will be reporting on all these exciting developments in coming weeks.

All of this hard work that thousands of comrades across the globe are putting into promoting Marxist ideas on campus serves a serious purpose. Unlike the ‘academic Marxists’ floating around the corridors of universities, these ideas serve us as a sharp weapon. They are the ideas around which we are building the embryo of revolutionary organisation that can decisively tip the scales in the class war we see erupting all over the globe. The task is posed of building a revolutionary leadership that can lead the working class to bury capitalism once and for all. Our future depends on our success. And it is from the youth that the best fighters in this struggle will come.

“Is it not natural that youth should predominate in our Party, the revolutionary party? We are the party of the future, and the future belongs to the youth. We are a party of innovators, and it is always the youth that most eagerly follows the innovators. We are a party that is waging a self-sacrificing struggle against the old rottenness, and youth is always the first to undertake a self-sacrificing struggle.

“No, let us leave it to the Cadets to collect the “tired” old men of thirty, revolutionaries who have “grown wise”, and renegades from Social-Democracy. We shall, always be a party of the youth of the advanced class!”