The last three weeks have seen a quick progression of the candidate of Rebellious France in the polls for the presidential election: from being fifth with around 11% to being third with over 18% now. This rapid rise has been accompanied with a slow but steady decrease in the voting intentions for the two candidates at the top, the far right Le Pen (from a peak of 28% down to 24) and the liberal Thatcherite Macron (from a peak of 26% down to 23).

This means that, Melenchon has a fighting chance of making it into the second round. This has led to panic in the ruling class, in France and internationally. The pessimists who could only see a “shift to the right” and the “danger of fascism” have been proven wrong.

The possibility of a second round pitching Le Pen against Melenchon has been described by the The Economist as the “nightmare option”. The polls show that Melenchon would beat Le Pen with 57 percent against 43. Reflecting the fears of the ruling class, the spread between French and German bonds has shot up to 75 basis points (from around 30 at the end of last year). The Financial Times points out that this “election is already the most unpredictable in a generation” and adds that “the three leading candidates in the polls now come from outside the mainstream political parties.” 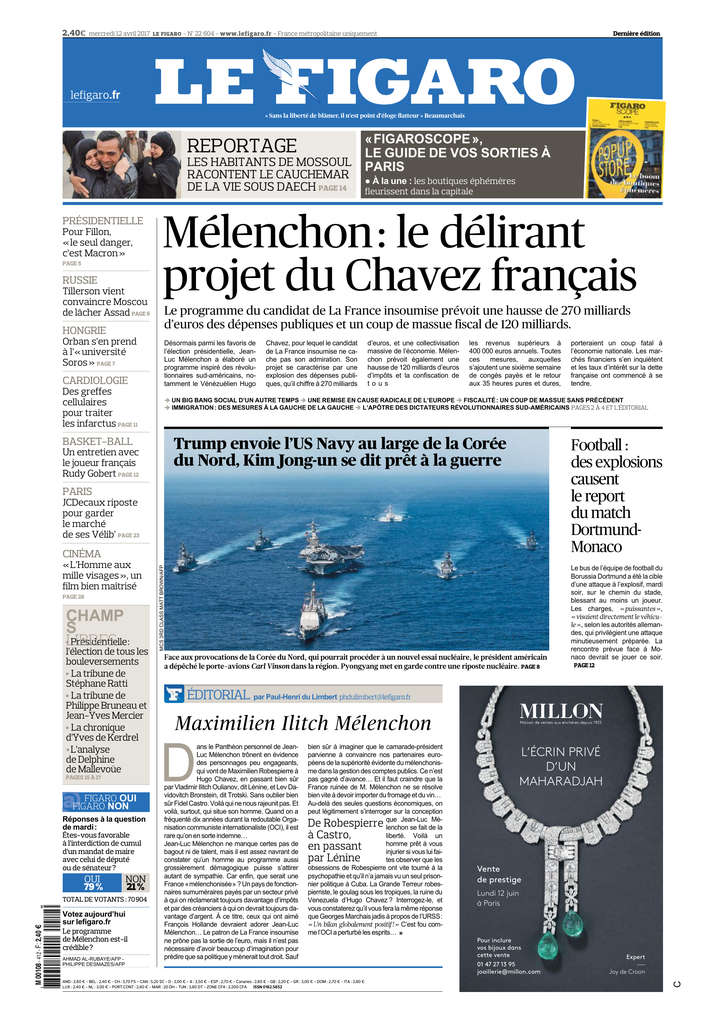 The rise of Melenchon in the polls can be attributed to a number of factors. First and most important is the fact that his program and speeches appear as a clear cut rejection of the whole existing order of things. This is how it is described, in panicky terms, by the FT: “he has promised to increase spending by more than €250bn a year, lower the legal working week from 35 to 32 hours and tax 100 per cent of any revenue 20 times greater than the median income. On foreign policy, he wants France to leave NATO and wholly renegotiate the country’s relationship with the EU. If the negotiation fails, he says it will be “up to the French people” to decide whether to remain in the bloc.” 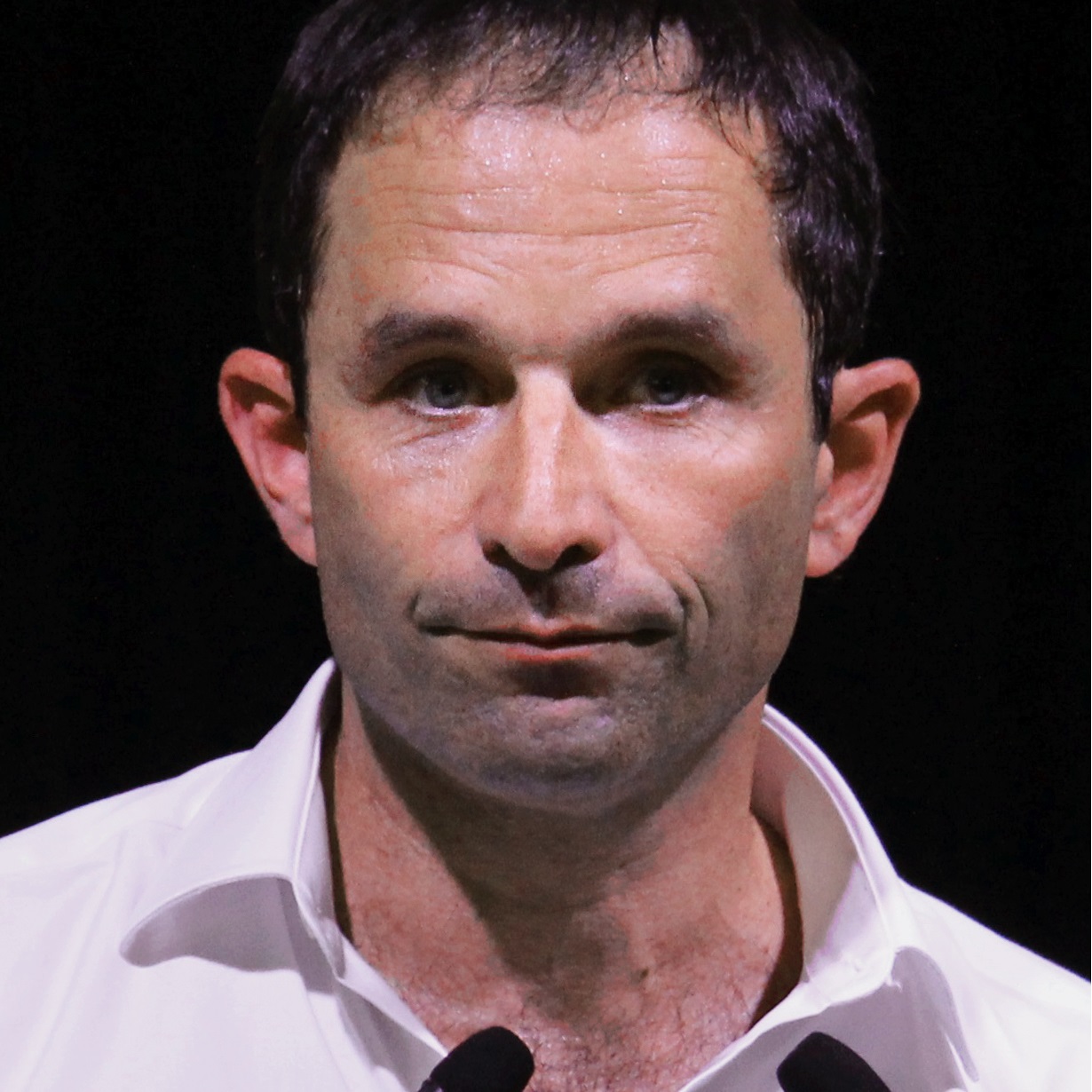 Benoit Hamon - Photo: wikipedia.orgThe whole of the French election campaign is dominated by a deep seated mood of rejection of the established order. Fillon was a surprise candidate of the right wing, defeating the favourites Sarkozy and Juppé in the primaries. He himself has now been disgraced by a corruption scandal which has pushed him down in the polls. The winner of the Socialist Party primaries, Hamon also defeated the favourite Valls by adopting, in words, a very left wing sounding programme, parts of which were borrowed from Melenchon’s.

In fact, only a few weeks ago, the whole of “progressive” public opinion (including Owen Jones), was exerting pressure on Melenchon to withdraw from the race in favour of Hamon in order “not to split the left vote” and to “allow a left winger into the second round”. Melenchon, correctly, stood his ground and by being consistently the most radical of the left candidates first overtook Hamon and now has caught up with Fillon and even gained a narrow advantage over him in some polls this week.

This reveals another important fact which needs to be registered: the collapse of support for the official PS candidate which now languishes at around 8-9%. The Socialist Party government, which was elected on a platform which was nominally in favour of jobs as opposed to austerity, went on to implement a program of cuts, unprecedented attacks on democratic rights (using terrorism as an excuse) and an all-out assault on workers’ rights in the form of the El-Khomri counter-reform of the labour code. The latter sparked a huge protest movement, one of the most important since May 1968, in which millions of workers and youth took to the streets and went on strike for months on end, a year ago. Simultaneously we saw a rebellion of the youth in the Nuit Debout movement of occupying the squares. The movement did not achieve its aims of stopping the counter-reform, but as we explained at the time that prepared the terrain for the workers moving from the industrial to the electoral terrain in an attempt to find a way out.

François Hollande - Photo: Matthieu RieglerThe whole experience of the Ayrault - Valls - Hollande governments created a deep rift between the PS and a large section of its traditional voter base. Only 24% of those who voted for Hollande in 2012 would now vote for Hamon, 26% are going to vote for Melenchon and 43% for the liberal Macron (a former minister in the “Socialist” government).

As the chances of Melenchon making it into the second round increase, it is likely that even more of Hamon’s supporters will shift their allegiances (46% indicate that they are not sure of their choice and might still change).

His rise has also coincided with the two televised debates in which millions could see the different proposals being put forward without the screening of the capitalist media. The night of the second televised debate, on 4 April, an instant poll by ELABE showed that viewers thought Melenchon had been the most convincing candidate (25%) and also the “one who best understands people like myself” (26%).

Another factor in Melenchon’s rise has been the way in which his campaign has been able to mobilise large numbers in big rallies, much bigger than any other party, and even bigger than the ones we saw in the previous presidential campaign in 2012. On 18 march, the anniversary of the Paris Commune, he gathered 130,000 at the place de la Bastille in Paris. On Sunday, 9 April, 70,000 massed in Marseille, a traditional stronghold of the National Front, but which was also one of the more radical centres of the workers’ protest against el-Khomri.

These rallies not only allow the candidate to bypass the boycott and the lies of the capitalist media but also give those present and those watching on social media and beyond a sense of their own strength, of the numbers behind the candidature and have a multiplying impact. Furthermore, the campaign is not built on the resources of any particular party (the support from the Communist Party structures is at best half hearted and Melenchon’s own Left Party is very small) but rather on the grassroots mobilisation of tens of thousands through local and neighbourhood campaign organisations of “Rebellious France”. 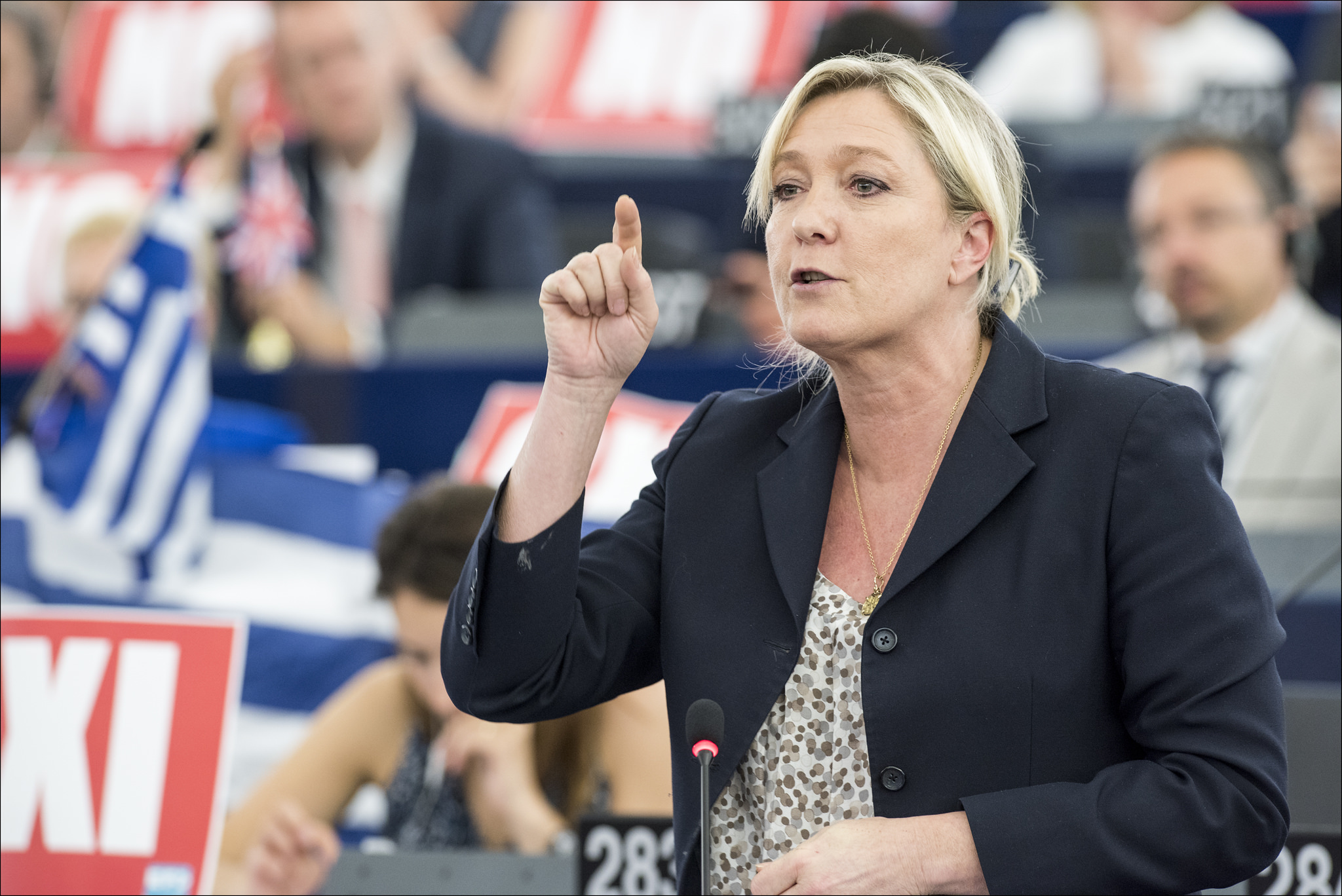 Le Pen - Photo: European ParliamentIt is significant that the section of the population where support for Melenchon is higher is amongst the youth. He is the top candidate amongst those between 18 and 24 years of age, with 29%. He also has strong support amongst both blue (18%) and white collar workers (20%), where he is second only to Le Pen. She is still first in her main constituency of blue collar workers, but has been losing some ground, from 45% down to 39%.

We must point out that in our opinion, the program of Melenchon has a number of shortcomings, which we have discussed elsewhere. The key question is that his program of progressive social and economic reforms in the fields of the health care, education, workers’ rights, etc. has to be paid for. The right wing has made a big thing of this issue: there is no money to pay for this, they say. Melenchon has responded by putting forward an aggressive program of taxing the rich, which even has its own online game (Fiscal Kombat) in which the candidate himself shakes down the wealthy and powerful (including Sarkozy, Lagarde, etc) to get the necessary funds.

Of course, Marxists are in favour of the most progressive system of taxation and also of fighting tax evasion. The problem is that this would immediately lead to a flight of capital towards other countries with lower tax regimes (as we saw when Hollande implemented his 75% tax on wealth in 2014, which he was later forced to drop). As we already see in the panicky movements of the bond markets, a Melenchon victory would immediately lead to an assault by “the markets”. As happened with Greece, a Melenchon government would be put under immense pressure by the capitalist class and its institutions (particularly the European Commission and Central Bank) to capitulate on all fronts even on the basis of its own limited program. The lesson from Greece is that, within the limits of capitalism it is not possible to break with austerity in a serious way. Either you make the workers pay for the crisis of capitalism or you break with capitalism and make big business pay. That means not only taxing the rich, but above all putting the means of production, distribution and exchange which they own, under common ownership and democratic control so that the resources of the country can be used to the benefit of the majority and not an unelected and unaccountable clique at the top.

Of course, a Melenchon victory in France would not be exactly like in Greece. After all this is one of the core countries in the EU, with the second largest economy in the euro-zone. A victory for a left candidate in France would have a massive impact throughout Europe, particularly in neighbouring Italy which is already mired in a deep economic and political crisis. It would greatly accelerate all the centrifugal forces in the EU.

The most important thing to understand is that this is a necessary school that the workers and youth in France must go through since a genuine revolutionary alternative is not present in sufficient numbers and influence. What the hundreds of thousands of people who look towards Melenchon see is not this or that defect in his program, but rather, in a more or less defined way, a program which expresses their anger and rejection of the whole of the system. On April 23 they have a chance to strike a blow at it.