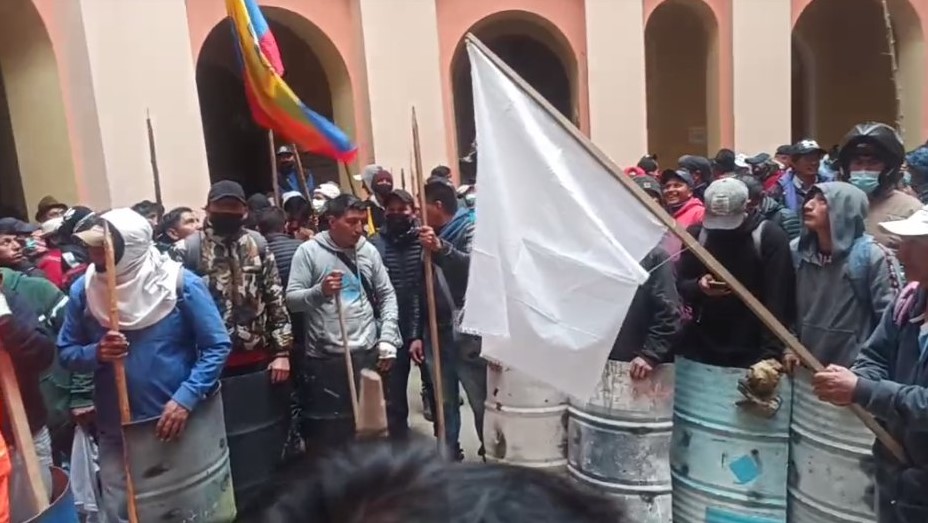 22 June was the 10th day of the national strike in Ecuador, called by CONAIE against the anti-working-class policies of banker president Lasso. The brutal police repression that has left two dead and dozens injured has not stopped the movement. Columns of indigenous peasant protesters have reached the capital, breaking through police and military lines and defying the state of emergency that was declared by the president in five provinces – including the capital Quito. The government and ruling class are in a panic, and the movement is taking on an insurrectionary character in some provinces.

A huge crowd of 50,000 people marched through the centre of Quito yesterday, defying the state of emergency and the repression.

15/ a huge angry crowd of perhaps 50,000 marched in the capital Quito today - the main slogan "Lasso out" (VIDEO @radio_pichincha) as part of Ecuador's national strike#ParoNacionalEc2022 pic.twitter.com/oehpyTRL8X

The same day, the organisations calling for the national strike delivered a response to the government's letter offering negotiations. In this response, they insist on negotiations that are genuinely transparent and which focus on their 10-point list of demands, as well as a series of prerequisites for any talks: lifting of the state of emergency, ending the repression, and withdrawal of the police from Parque del Little Tree and the House of Culture in the historic centre of Quito.

At the end of the peaceful but angry protest, under the slogan “Lasso out”, there were again police repression and clashes, with the youth taking the lead in the movement’s self-defence organisation. 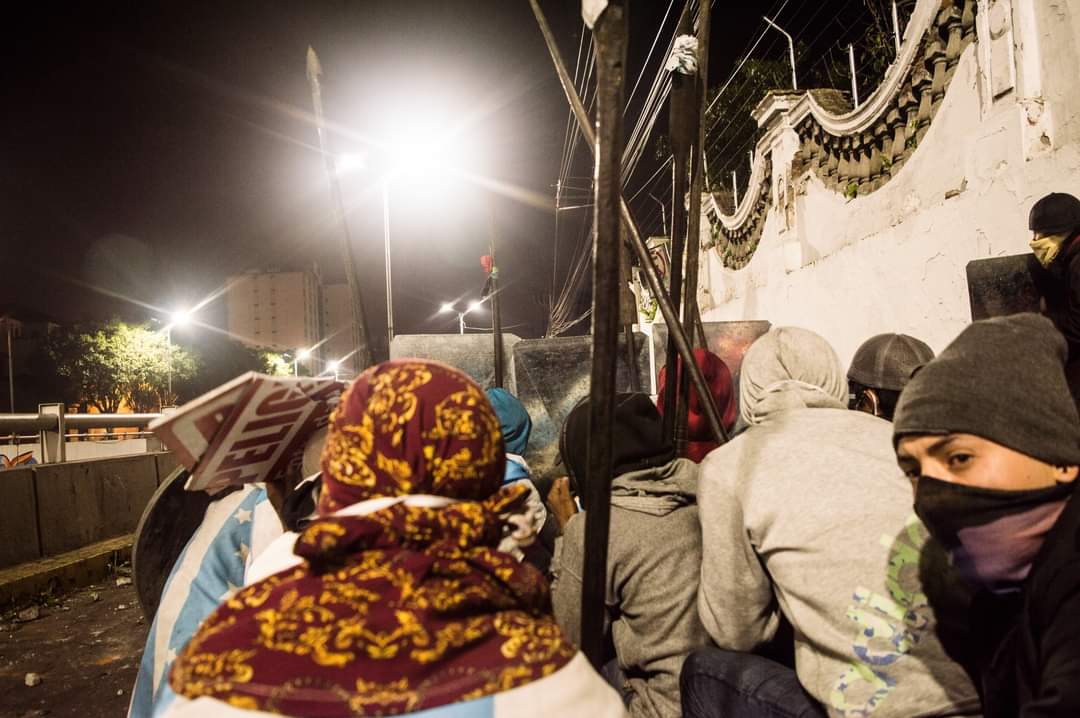 The youth are taking the lead in the movement’s self-defence organisation / Image: Felix Rodriguez

Meanwhile, in some provinces, the national strike has already taken on insurrectionary proportions. This was the case, for example, in Ambato, the capital of Tungurahua province, south of Quito. A huge crowd of protesters – led by a self-defense line of youths armed with sticks, wearing helmets and carrying homemade shields – marched towards the government building with the aim of taking it over. When they arrived, they jumped over the protective fence and entered the governorate.

16/ After a mass demonstration in Ambato, the crowd takes over the governor's building of #Tungurahua province. Ecuador's national strike acquires insurrectionary features in the provinces. #ParoNacionalEcuador pic.twitter.com/Ij4dLOTaz8

The police stepped aside and offered no resistance. They were outnumbered. Once the protesters took control of the governorate, they renamed it Casa del Pueblo. As stated in the article we published early on 22 June, the question of "who rules, the people or the government of the banker Lasso?" is being raised more and more starkly. The movement (both stimulated and angered by the repression) is becoming stronger and more dynamic.

In the city of Puyo, on the night of Monday 21st, Kichwa community member Guido Guatatoca was killed by a direct blow to the head from a tear gas grenade. The protesters responded by burning the police station in the city centre, and consequently the police forces left the city, which is the capital of the Pastaza province in the Amazon region. Protesters also attacked the local offices of Banco de Guayaquil, owned by the banker president. 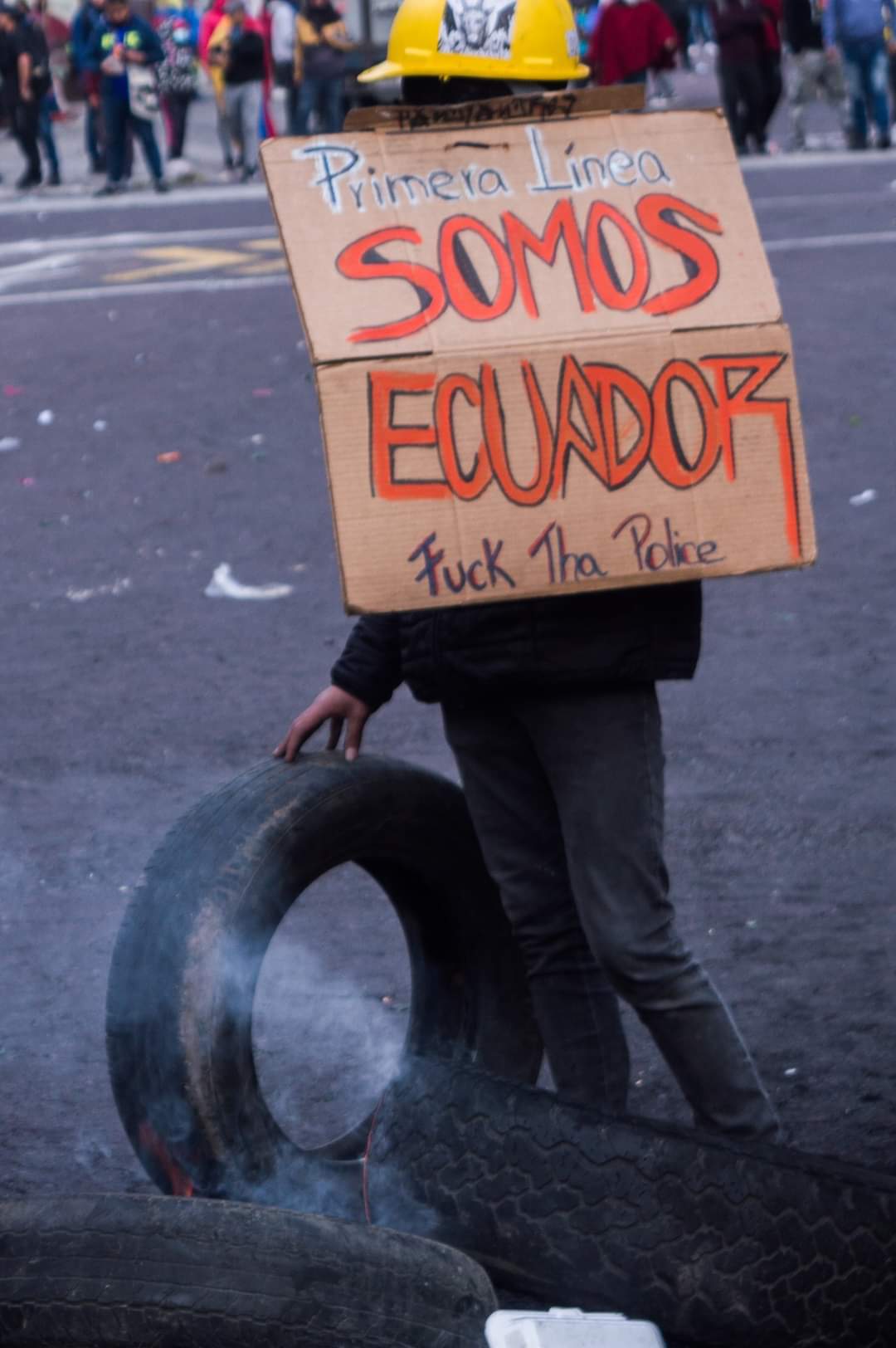 Both Pastaza and Tungurahua are amongst the 5 provinces under the state of emergency decreed by the murderous banker Lasso; but clearly the government is not in control of public order. It is the mass organisations which have taken it over.

There is a mood of panic amongst the ruling class. Now they have used the Ecuadorian Episcopal Conference (CEE) to repeat the call for dialogue. There has also been a joint statement from the imperialist embassies calling for "peace, reconciliation, dialogue and national reconstruction." This means they are afraid, and are asking the government to make concessions in order to get the masses off the streets. The government, clearly, is weak. In a recent poll, Lasso's popularity was at just 16 percent.

It is therefore trying to use the trap of negotiations (since the repression did not work) to demobilise the masses. In fact, this is clearly stated in an editorial in El Comercio which argues that in exchange for the opening of the dialogue, the movement should offer "the end of the mobilizations." This is turning things upside down. The CONAIE mobilisations are taking place precisely because the dialogue had not gotten anywhere. Dialogue is not the objective of the national strike; rather, it is the satisfaction of the 10 demands, and therefore the strike should not be lifted until they are achieved.

It cannot be entirely ruled out that the government might offer serious and substantial concessions, faced as they are with the alternative of being swept away by a full-fledged insurrection. The aim of such concessions would be to take the movement out of the streets. Once that goal is achieved, then they can renege on their promises and go back on the offensive again.

But make no mistake: in addition to the negotiating card, the government and the ruling class are willing to defend their power and privileges using all the means at their disposal. They have already mobilised more than 2,000 army troops, fully armed, to defend the presidential palace. They understand that what is at stake in Ecuador is precisely the question of who rules the country.

The attitude of the CONAIE leaders and in particular of Leonidas Iza will be crucial. So far they have played a positive role, rallying the movement, keeping the momentum going, moving forward in the face of repression and standing firm on their 10 demands. Regarding the negotiations, they have said that they are not against the idea, but they have raised prior conditions.

The movement has started to organise self-defence bodies, building on the experience of 2019. What is really missing now is the development of mass assemblies, which have already started, to give the movement a democratic and organised character. Such bodies could become organs of dual power and challenge the power of the official capitalist state. The strategy that should be proposed is one that leads to a government of the workers and all the oppressed sectors of society.

The events in Ecuador are the continuation of the interrupted process of October 2019. The potential for such mass movements likewise exists in the rest of Latin America, a continent that is just coming out of the pandemic and finding itself increasingly devasted by the global capitalist crisis.