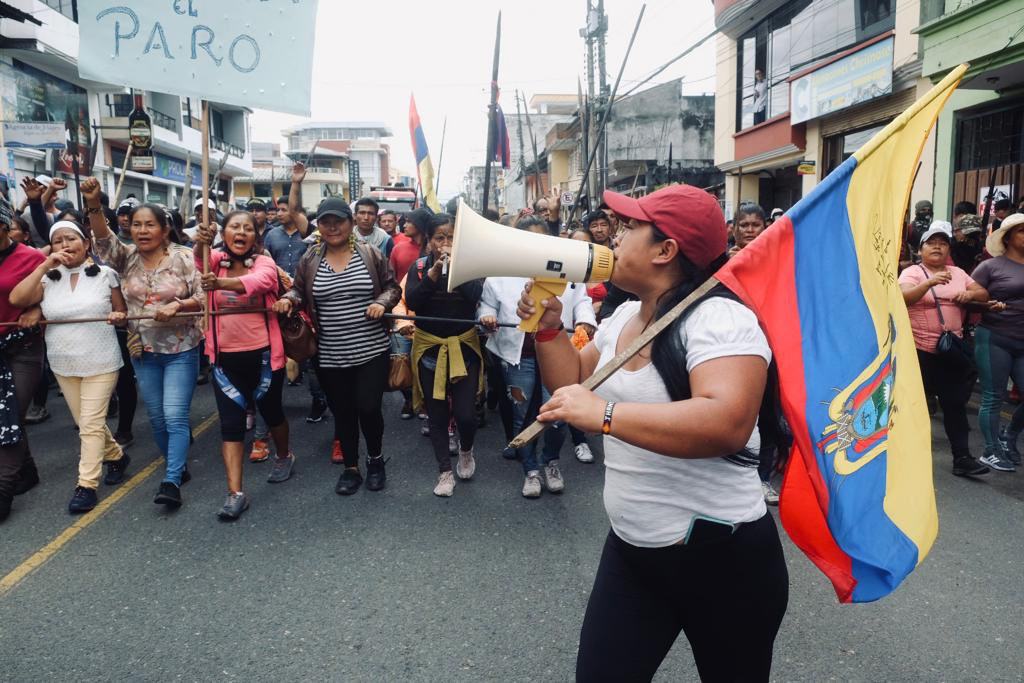 22 June marks the 10th day of the national strike in Ecuador. The first year of the Lasso government has been a tragedy for the workers and peasants. Ecuador was one of the countries most affected by the COVID 19 pandemic. Unemployment and misery afflict all the country's provinces. The Lasso government has religiously complied with all the demands of the International Monetary Fund since taking power in May 2021. The increase in fuel and food prices has been the last straw.

[Read the original in Spanish here]

The call of the CONAIE (Confederation of Indigenous Nationalities of Ecuador) for an open-ended national strike, starting 13 June, found a massive response from the peasants and students of Ecuador from its first days. They are bringing the country to a halt with road blockades and large demonstrations in the cities. The police have not been able to reopen the roads and it is the protesters who control who passes or does not pass the blockades. Now the inhabitants of the capital, the youth of the working-class neighbourhoods, and the workers at large, are joining the fray. 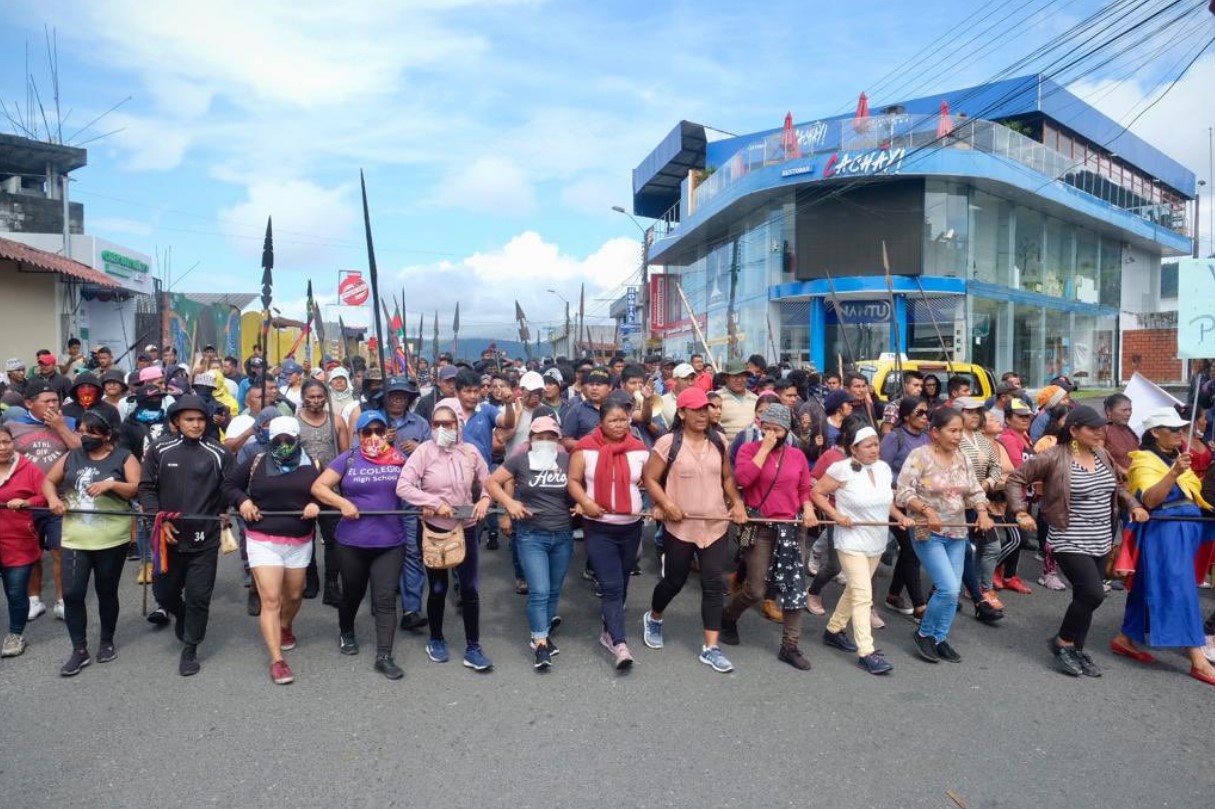 The peasants and students of Ecuador are bringing the country to a halt with road blockades and large demonstrations in the cities / Image: CONFENIAE

On Friday 17 June, in yet another violation of democratic rights, President Lasso declared a “state of emergency” in three central provinces, thus banning demonstrations and protests. On Monday 20 June, some deputies in the National Assembly tried to overthrow the state of emergency powers, but they did not obtain the necessary majority.

Despite the fact that Lasso publicly says that he wants dialogue, in the streets the police are authorised to repress the masses. But the rage is such and the determination to fight is so strong that the repression could not prevent the arrival of the peasant and indigenous columns to the capital city of Quito. We see impressive images of the marches towards the centre of Quito, moving forward with the police barely looking on.

The protesters need shelter and food to stay in Quito, and there is a whole chain of assistance so that the food arrives and they can rest from their long walk. The experiences of the Red October of 2019 are alive in everyone's memories, and it seems that the degree of organisation is even greater than in 2019. Given the government's decision to militarise the House of Culture, which was the centre of the People's Assembly in 2019, the protesters now use the public universities of Quito as accommodation camps, and it is there where the decision making Assemblies are held.

The police are constantly violating the autonomy of the universities to repress the strike, both in Cuenca and Quito, but the protesters remain united and are gaining strength. Yesterday night, on 21 June, the Central University of Quito was attacked by the police with tear gas.

In yesterday's CONAIE statement, Leonidas Iza said that since the start of the strike there have already been two deaths, hundreds of protesters wounded, some seriously and others mutilated. 79 demonstrators have been confirmed detained, and there may be more. On Sunday 19 June, the young Johnny Saúl Félix Muenala died in the Collas sector, 30km from the capital, after falling into a ravine while fleeing military repression.

Additionally, the Confederation of Indigenous Nationalities of the Ecuadorian Amazon (Confeniae) denounced the “death due to repression by the public force” of the Kichwa community member Guido Guatatoca in Puyo, Pastaza province, in the Amazon region. On Monday 20 June, protesters in Tucumbo, northeast of Quito, were attacked by gunfire from a private vehicle. On Saturday 18 June, Iza himself suffered a firearm attack against the vehicle in which he travels.

In the news, the representatives of the ruling class say they want dialogue, and president Lasso has announced some minor concessions, but in the streets, the repression intensifies. The protesters are creating their own methods to defend themselves and advance. There are many images of the police retreating in front of an advancing crowd in Quito, and also in the provinces.

In a threatening intervention, Defence Minister Luís Lara, escorted by the Armed Forces high command, said that “democracy is at serious risk” and warned that “the Armed Forces will not allow any attempt to break the constitutional order or any action against democracy or the law". The message is clear: in the face of the protests of the majority, the army is there to guarantee bourgeois order.

A comrade from the southern province of El Oro sends us this account of the situation:

“Every day from dawn, the strike begins. Depending on the sector where one lives, it will be stronger or not. Within the three provinces that have just been declared a state of emergency, it is always strong, clashes with the police and the army are very common. From dawn, protesters begin to block the roads using all kinds of materials, trees are felled, stone or earth is used, all in order to create a barrier that impedes mobility on the roads. Many drivers and people get angry for these reasons, some try to run over others in order to pass; others are very understanding, some even join the demonstrations.

“All this is on the outskirts of the provinces. Within the cities, after a week of strike, food shortages are beginning to be felt, with cost increases of up to 100 percent. This is a direct consequence of one of the slogans of those of us who have risen up in the strike: ‘without the countryside, the city does not eat’.

“In the capital Quito, there is a daily struggle. Each day more and more caravans arrive with people willing to fight. Demonstrations take place around the historic centre. In the first days, the clashes with the police were slight, but now there is a true state of terror, the police commit crimes against humanity and are completely protected by the government. The clashes are becoming more intense.

“The repression is terrible. Recently and after his arbitrary arrest, an attempt was made to assassinate Leonidas Iza, the leader of CONAIE, the organisation that called for the protests. The small media outlets that broadcast news about the demonstration are attacked, the mass media say that everything is fine and every day and every hour government propaganda is broadcast. The government has even committed atrocities in the field of communication, releasing private videos of people in order to stop the huge wave of negative comments against Lasso.”

On the other hand, despite the state of emergency, the government tries to lean on sectors of the middle classes by calling "peace marches" in favour of the government, in Quito and Guayaquil, which do not suffer any type of repression, and are covered in all the news. However participation is negligible, despite the fact that these middle-class representatives have all the space in the press and direct access to public spaces.

Lasso sits theatrically every day with representatives of organisations that have nothing to do with those who are fighting in the streets. Meanwhile, the main slogan in the streets is “Fuera Lasso” [Lasso Out!]. In addition to repression, the government plays the so-called "negotiation" card. A group of some 300 alleged "civil society organisations" have called for "dialogue", also endorsed by the United Nations Coordination in Ecuador and the Embassy of the European Union in Ecuador. These are ghost organisations, NGOs that are nothing more than arms of the bourgeois state apparatus. Their intention is not to facilitate dialogue, but to demobilise, to get people off the streets. CONAIE has correctly rejected this farce: "We will not respond to calls from actors with no legitimacy."

In their public statement on Tuesday 21 June, after a massive assembly of peasant, indigenous, youth and workers’ organisations at the University Theatre, the convening organisations announced that they were preparing a response to the government's letter about the negotiations. Leonidas Iza declared that he would accept the dialogue "if the government repealed the State of Emergency and demilitarised the Parque del Arbolito" and the Historic Centre of Quito.

For June 22, various labour and union organisations have called for demonstrations in support of the CONAIE national strike.

The situation is critical. Neither the brutal state repression nor the false offers of concessions and dialogue have broken the movement that continues to advance and has already reached the capital. For the mobilised masses, it is not only a question of achieving their just demands, but also of booting out the Lasso government.

The situation has many parallels with that of the Red October of 2019. Then, too, the masses paralysed the country after responding to the call of CONAIE and despite the brutal repression of the government they took the capital Quito, forcing the president to flee to Guayaquil. However, despite the popular uproar, at that time for the overthrow of President Lenín Moreno, the CONAIE leaders signed a partial agreement with the government and called for an end to the mobilisation. The opportunity was lost.

It is difficult to know what will happen this time. But it is clear that the masses of working people have the necessary strength to prevail. The problem that is beginning to be put on the table is that of who rules: the mobilised majority or the banker president? The ruling class clearly understands this, hence the warnings from the army. To solve this dilemma, the workers and peasants must create their own democratic organisations, in the form of Peoples' Assemblies, and move forward with a clear strategy with the objective of taking power into their own hands.