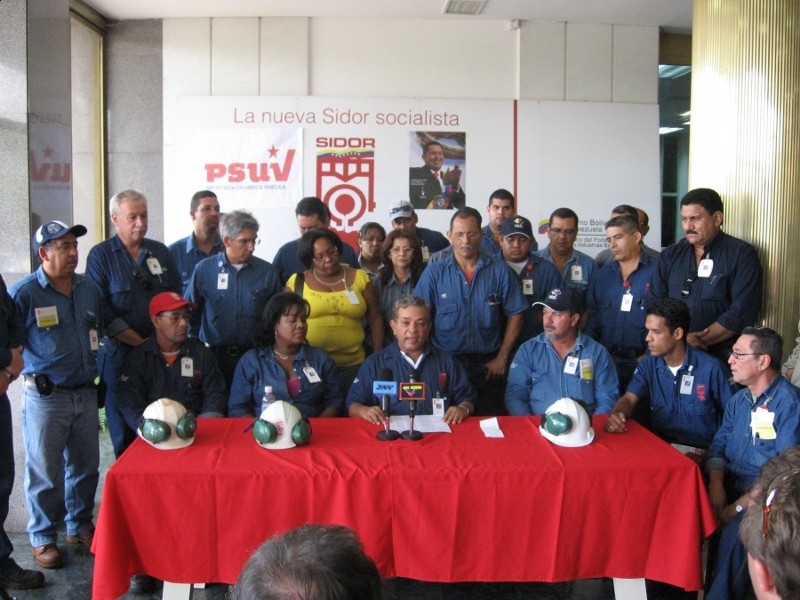 On May 15th, Venezuelan president Hugo Chávez took a bold and historic initiative, when he decided at a meeting in Puerto Ordáz in Guayana, Bolívar state, to put workers at the forefront of the running of the primary industries located in this region.

As part of the Plan Guayana Socialista (Socialist Guyana Plan), the workers of the nearby factories had organized "round-tables" (working groups), where they had been discussing concrete proposals to advance in the direction of workers' control as the only solution to the critical state of affairs in the companies concerned.

This work got a huge push one year ago in May 2009. After a meeting between himself and workers’ representatives from these companies, Chavez made an appealed to the workers to promote workers' control and the election of managers from below. He also signed a decree expropriating five briquette companies, among them Orinoco Iron, Venezolana de Prerreducidos del Caroní (VENPRECAR), Materiales Siderúrgicos (MATESI), Complejo Siderúrgico de Guayana (COMSIGUA), and also Tubos de Acero de Venezuela (TAVSA) and Cerámicas Carabobo. The nationalisation of these final product companies which had never been in state hands before was aimed at taking control of the whole production process.

This move caused deep concern among the bureaucrats and state functionaries who desperately tried to bury Chávez speech under a layer of confusion and hide its revolutionary content. However, the workers took up the radical ideas of this speech and transformed them into concrete proposals in the work groups of Plan Guayana Socialista.

On Saturday 15th, this bore fruit in a ceremony where Chávez swore in a group of workers as company presidents and supply- and commercialisation directors, most of whom had been elected democratically by the workers themselves in the working groups. Thus the presidents of companies like SIDOR (steel), ALCASA (aluminium), VENALUM (aluminium) and Carbonorca (coal) are now workers from these companies. Among these, we find comrades with a long history of left wing militancy, such as Elio Sayago in Alcasa and Carlos d'Oliveira in SIDOR, a member of the Revolutionary Front of Steelworkers. According to Chávez, the aim of the changes in the presidency of the companies is to introduce workers' control immediately.

Incapacity of the bureaucracy

This move on the part of Chávez can only be explained by the critical situation that has developed in the basic industries of Guayana in the last two years. The re-nationalization of SIDOR in April 2008, was the product of the heroic struggle for more than one year of the Guyanese working class, and opened a period of enthusiasm and hopes for the future. Workers wanted to put the company at the service of the people and break all the elements of capitalist exploitation.

However, the workers were soon to face a new enemy: the caste of bureaucratic functionaries and managers, many of them left in place from when the company was controlled by the Argentinean multinational, who tried to sabotage production and thus undermine and discredit the decision to nationalize SIDOR. This resulted in huge problems and there were even actions of direct sabotage, like the fire which broke out in June 2009 in MIDREX II, one of SIDOR's processing plants, causing the paralization of the plant and thus a steep fall in production. This was clearly a conscious attack, carried out by people from within who had very precise knowledge of the production process. Other incidents included irregularities in the storage department and doubtful management practices in the commercialisation sector. Thus production fell from a normal level of approximately 4.6 million tons of iron per year to approximately 3 million in 2009. 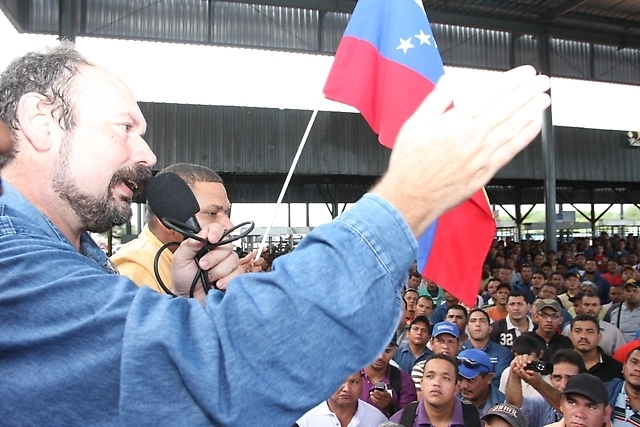 Another problem was the level of outsourcing, where multinational and private companies provided services such as transport and delivery of raw-materials to the state-owned companies. Chávez also denounced this in his speech on May 15th, reminding everyone of the fact that SIDOR in 2009 alone paid 423 million Bolívares ($US 98 million) to such outsourcing companies. The work carried out by these outside contractors could have been carried out in a much cheaper way, if all the links in the production chain were state-owned. Through bureaucratic mismanagement and secret deals with multinationals, the state-owned companies are in fact benefitting the multinational companies.

All this is the ultimate proof that the bureaucracy is incapable of running the newly nationalized industries. Chávez simply had no other choice than to base himself on the workers, otherwise the future of the primary industries in Guayana seemed very bleak indeed and the most likely perspective would have been the closure of various plants, which would have meant mass lay-offs.

As we have reported in previous articles, the workers quickly realized this and began to organize and push for the implementation of workers' control. There were elements of workers' control in some SIDOR departments, one of the being the “Departamento de Mantenimiento de Crudas” were the workers resisted the appointment from above of an individual associated with the former multinational owner and went on to elect a well-known Socialist as the director of the department.

Another good example of the thirst for Socialist ideas among the workers and an indication of the mood developing in SIDOR was the setting up in April last year of the UBT, the Bolivarian Workers' University, with more than 1,300 workers registered. The UBT gives workers weekly classes, not just in administration, mathematics and other technical aspects, but also in politics and theory.

The working groups of the Plan Guayana Socialista were also an arena of struggle, where the workers constantly had to fight for the programme of workers' control. “We had to put forward concrete proposals which can put the factories back on track and we fought to get a majority for them in the round-tables” José Padrino López, a SIDOR worker, told Marxist.com. “We are not in this for the sake of positions, but only to fulfil the will of president Chávez: the implementation of workers' control in the companies of Guayana”.

The selection of comrades such as Carlos d'Oliveira and Elío Sayago as presidents is obviously a blow to the bureaucracy, but it doesn't mean that the battle is over. The corrupt managers are now plotting, in an unholy alliance with elements of the opposition and the reformist sectors of the trade-union movement, in order to sabotage production and suspend the decisions of Chávez in mid-air. Their aim is to block all the initiatives in direction of workers' control and act as a fifth column which will make life impossible for the revolutionaries in the new management of the companies. They want workers’ control to fail and they will stop at nothing to make sure it does.

The comrades at the head of the companies are taking over factories in a very difficult state. In a sense the situation that they face can be compared to that of Lenin and Trotsky after the taking of power in October 1917. The main task now is to rebuild the nation (and in this case the companies) under the leadership of the proletariat. As a matter of fact, Lenin’s Draft Regulations on Workers’ Control could be used as a model on which to develop workers’ control in these companies.

It is necessary to take concrete steps to defend the companies against corruption, mismanagement and sabotage:

On the other hand, it is clear that the fate of the movement towards workers' control is closely tied to the general development of the revolution. In the long run, it is not possible to build Socialism in one country and much less in one factory. If the commanding heights of the Venezuelan economy remain in private hands, the Capitalist market will impose itself on the factories under workers' control and ultimately destroy any attempt to move towards Socialism. The Guayana workers must therefore inscribe on their banner the demand for the expropriation of the land, the key sectors of industry, the food sector and the banks, as the first step towards a real democratically planned Socialist economy.