Share
Tweet
After the cement industry, now Chavez has nationalised SIDOR with its 15,000 workforce. This has come about thanks to the pressure of the SIDOR workers who were able to contact Chavez directly. The decision is a correct one. It must now be followed by a general nationalisation of the commanding heights of the Venezuelan economy and finally complete the revolution.

At 1.22am Venezuelan time on Wednesday, April 9th, Venezuelan vice-president Ramon Carrizalez announced the decision of president Chávez to renationalise the giant steel plant SIDOR located in the southern state of Bolivar. The decision was taken as the Argentinean-Italian multinational group Techint (the majority shareholder of SIDOR) refused to make concessions to the workers in the collective bargaining agreement.

The workers of SIDOR have been struggling for more than 15 months fighting for improvements in wages, conditions and health and safety in the collective bargaining agreement. The main points of contention were: 1) wage increase, where the company offered very little and wanted to spread any increase over a 30-month period; 2) the question of subcontracting, where the workers were demanding that all subcontracted workers (9,000 out of a total workforce of 15,000) should be incorporated into the main workforce, and 3) that there should be a substantial increase in the pensions of retired workers who were receiving less than the minimum wage.

SIDOR was privatised in 1997 under the government of Caldera, when the former guerrilla Teodoro Petkoff (now a prominent opposition leader) was in charge of privatisations. SIDOR is now owned by Argentinean-Italian multinational Techint which has made multi-million profits on the back of massive overexploitation of the workers which has resulted in a marked increase in deaths and accidents at work. José "Acarigua" Rodriguez, leader of the workers' union SUTISS, described the ten years of privatisation as years of "humiliation and ill treatment on the part of the multinational, which has outraged the workers and the country" and blamed Techint for the 18 workers who have died in the plant in accidents.

When Chavez made a call to "nationalise all that was privatised", in January 2007, the workers responded with spontaneous walkouts and by raising the Venezuelan flag over the SIDOR installations. They were demanding the nationalisation of SIDOR. Finally, after many negotiations and pressure from the Argentinean government of Kirchner an agreement was reached between Techint and the Venezuelan government. The company was to sell to the national market at preferential prices and in exchange there was not going to be any nationalisation. But this was an agreement that could not last. Throughout the 15 months of the collective bargaining negotiations the company has maintained a provocative attitude. Finally, the workers' patience run out and they started a series of stoppages in January, February and March. 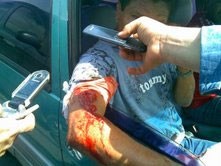 What was the response of the Ministry of Labour? First of all they tried to impose binding arbitration on the workers. Then the National Guard was sent to brutally repress the workers on March 14th during an 80-hour strike. Several workers were arrested, including union leader Acarigua, and many were injured during the attack. The National Guard acted in a particularly vicious manner, damaging the workers' cars and other property. The workers, the masses and the whole region responded with a clear class instinct, organizing solidarity meetings and pickets, threatening strikes in other plants, etc. 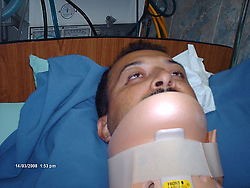 This incident was the most serious clash between workers and the National Guard during the Chávez government, even worse than when the Aragua police blocked Sanitarios Maracay workers from attending a Freteco demonstration in Caracas. The workers denounced the fact that the local commander of the National Guard was in close contact with the company management and basically was acting on their orders. Here we see one of the most important challenges facing the Venezuelan revolution. The old state apparatus, created and perfected over 200 hundred years to serve the interests of the ruling class, although weakened by the revolution, is still basically intact, and it is still attempting to serve the same interests.

As a Bolivarian MP for Guyana said: "I consider these abuses to be a long way from the revolutionary principles promoted by the President of the Republic." El Zabayar, who came out publicly for the nationalisation of SIDOR further explained that, "There are sectors within the state that play at wearing down the government, using governmental authorities to assume a pro-bosses attitude". This is precisely the problem: the state apparatus remains largely the same, and a capitalist state cannot be used to carry out a socialist revolution.

Even after this brutal repression, the Ministry of Labour (which also played a dreadful role in the Sanitarios Maracay struggle), insisted on calling a referendum of the workers to make them accept the company's proposal. José Melendez, another leader of SUTISS, harshly criticised the role of the Ministry: "They accuse us of being troublemakers for rejecting their ballot. More than once we have shown our support for the revolution, but this does not mean we are going to allow the Minister of Labour to follow a counter-revolutionary and anti-worker policy, which, at the end of the day, only benefits the right wing." And he added: "The Minister says that we are against the process that we are counter-revolutionary, but the truth is that the one who is damaging president Chávez's reputation is the Minister, the one who is acting in favour of the right wing is the Minister, by acting as a spokesperson for the company".

The workers remained united and correctly opposed this ballot and called their own on April 3rd, with two options: 1) to accept the company's offer, 2) to mandate the union to continue talks. The overwhelming majority of the workers rejected SIDOR's offer, with 3338 voting against and only 65 in favour.

Then, on April 4th, the workers went on strike again and marched to the Bolivarian University in Bolivar, where president Chávez was attending a graduation ceremony and demanded to be heard. As a result of this pressure, president Chávez intervened in a live TV programme on April 6th, to take a position (full video here). Among other things he recalled that the SIDOR workers and others from the basic industries in Guyana opposed the bosses' lock-out in 2002, "even when they received death threats, and even when they cut off gas supplies from Anaco, they marched to Anaco and clashed with the police". He added that the conditions of the workers were "horrible" and that the "revolutionary government has to demand from any company, national or multinational, Latin American, Russian or from any part of the world, to abide by Venezuelan laws", referring to the law passed on May Day last year which outlaws subcontracting. He also announced that he had instructed the Vice-president Ramon Carrizalez to meet with SUTISS leader Acarigua and then with the company to try to settle the issue.

He added that his government was one which, "respected Marxism, Marxist tendencies and the Marxist method" and that it was a "pro-workers' government" which "would know how to take the necessary measures". He explained that he always tries to "look for agreement, negotiation and so on, but in relation to SIDOR, as of yesterday, I said enough is enough". Chávez also added that his intervention was the result of the workers going to the graduation meeting in Bolivar and getting the information directly to him. He added that he had had harsh words with the regional governor over the repression of the National Guard against the workers, and that he had also talked to the commander of the National Guard to remind him of "old instructions to take care of the workers".

This intervention by Chávez through the vice-president was in fact a slap in the face to the regional governor and above all to the Minister of Labour Rivero. Their authority was superseded and the government sided clearly with the workers. The company, which until that moment had said that they would not talk to the workers again, agreed to a new meeting.

A three party meeting between the company, the union and the vice-president took place on Tuesday 8th, in which the company made minor concessions. Just after midnight, the vice-president Carrizalez, who had said that the meeting could not end without an agreement, asked the company one last time if they were not prepared to make a counter-offer to the union's final offer on wages, and when the company refused he asked this to be recorded in the minutes. He then stepped out, called president Chávez and came back to the meeting to announce the re-nationalisation of SIDOR. 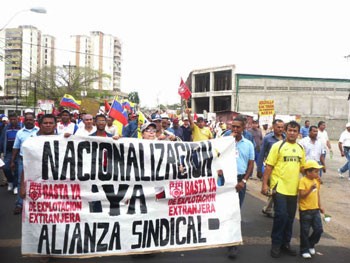 Thousands of workers immediately started to celebrate a victory that they did not even believe was possible. In fact the leadership of the union had declared a few hours before that after signing the collective bargaining agreement they would then continue the campaign for the nationalisation of SIDOR.

This is yet another turning point in the Venezuelan revolution and a clear indication of the direction it should take. This is not a small bankrupt company that has been taken into public ownership, but the country's only supplier of steel and Latin America's fourth largest producer. This decision is likely to provoke a backlash on the part of the multinational and also on the part of the Argentinean government which in the past has put a lot of pressure on Chávez in defence of Techint. The Venezuelan revolution and its supporters abroad, particularly in Argentina, must be ready to withstand this pressure and launch a campaign in defence of this nationalisation. The workers of SIDOR should take immediate steps to implement workers' control in order to prevent the company from engaging in any kind of sabotage, seize the installations, control the stocks and above all they should proceed to open the account books of the company.

The issue of compensation will now arise. The company will probably demand an outrageous sum of money. The best way to settle this is precisely by opening the accounts of the company. If you calculate the amount that was originally paid by the multinational (very little), the investment they have made in the plant (very little), and then you deduct the profits they have made in the last 10 years (a lot), you will easily reach the conclusion that they are not actually entitled to any compensation at all. 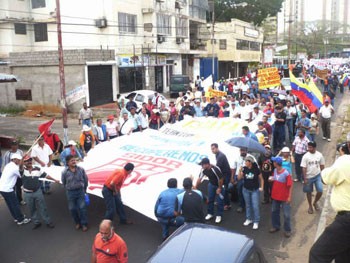 More importantly, this nationalisation comes mainly as a result of the pressure of the workers in struggle, who were also encouraged by Chávez's recent announcement of the nationalisation of the whole of cement production in the country. This is a mobilised and aroused workforce which will now demand workers' control. In previous nationalisations, including the recent one of a dairy plant, Chávez has insisted that the workers must set up "Workers' Councils" or "Socialist Councils". These must be used by the workers and the union SUTISS to exercise workers' control and management. As Venezuelan workers know only too well, nationalisation in itself does not guarantee the interests of the workers and the Venezuelan people. After all, PDVSA was for more than 25 years a state-owned company and a massive bureaucracy developed which responded to the interests of the oligarchy and the oil multinationals.

Bolivar is one of the most important concentrations of the industrial working class in Venezuela, a decisive factor in the revolution. The victory of the SIDOR workers will also encourage workers in other basic industries in the region to go forward and struggle for democratic workers' control.

The re-nationalisation of SIDOR is another step forward in the right direction. In the last few months, the oligarchy has stepped up its campaign of sabotage of the economy, particularly the food distribution sector. At the same time imperialism has increased its provocations, threatening to put Venezuela on the list of countries that "harbour terrorism". It is now time to take decisive steps forward by nationalising the fundamental levers of the economy under the democratic control of the workers and finally completing the revolution.