One thousand people marched yesterday through the main streets of Caracas, in what was the largest demonstration in favour of the expropriation of an occupied factory that has ever taken place in Venezuela. This was truly an historic march. It was the real and genuine spirit of the working class taking over the streets of Caracas and pointing the way the revolution must advance. 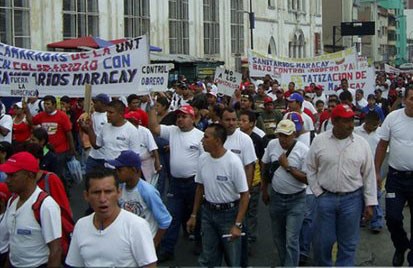 One thousand people marched today through the main streets of Caracas, in what was the largest demonstration in favour of the expropriation of an occupied factory that has ever taken place in Venezuela. At the head of the march were the sons and daughters of the workers and their wives, carrying the Venezuelan flag. Behind them were more than 600 workers and their families out of a total of 800 who compose the Sanitarios Maracay workforce (a sizeable number had to remain in the capital of Aragua to protect the occupied installations of the factory). They carried banners demanding the expropriation of the company and its nationalisation under workers' control. Many wore T-Shirts in support of President Chavez and the Venezuelan revolution, with the two open hands symbolising the struggle for 10 million votes, and many also carried hand held placards with slogans like "No to capitalism", "Down with bureaucracy", "Expropriation now", "Nationalisation now". 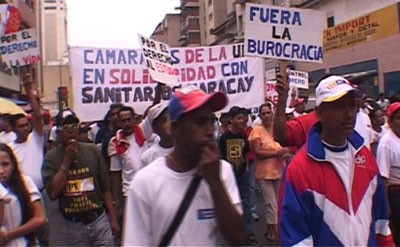 The march was also composed of a few hundred workers coming from other companies in Aragua (Pepsi, Snack's, Produvica, etc.), called out by the Aragua UNT, which sent some of its main leaders like Richard Gallardo. Orlando Chirino and Stalin Pérez from the National Coordination of the UNT were also present. Also significant was the presence of nearly half of the workforce of Inveval, the company that together with Invepal started the process of occupation and expropriation of companies in Venezuela, and the only company, together with Sanitarios Maracay, that is run by the workers' assembly. 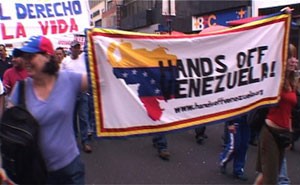 The workers of Inveval carried several banners of their factory as well as those from the Freteco (Revolutionary Front of Workers in Occupied Factories and under Cogestión) supporting nationalisation and workers' control. An international solidarity delegation from Britain, Denmark and the US, part of the Hands Off Venezuela delegation to the December 3rd election process, was also present and had an extremely warm welcome. The comrades carried the Hands Off Venezuela banner and enthusiastically participated in the march.

The mood was very militant. One could feel the confidence of the workers and their families in their own forces. The beginning of the march was moving; in front of the State Prosecutor's Office, where the march started, in Parque Carabobo, there was a rally by a group of relatives of the victims of the massacre of Yumare (one of the worst instances of state terrorism and repression during the IV Republic). The workers gave them an ovation and encouraged them to continue their struggle, shouting demands and slogans. Both groups united in a joint cry for "Justice".

After this moving moment of co-fraternisation amongst revolutionaries, the march started going up Avenida Universidad. At the front were the sons and daughters of the workers, carrying the national flag, as a symbol of the future of the Venezuelan people. A truck with loudspeakers continually broadcast the songs of the revolutionary singer of the people, Ali Primera, and the slogans of José Villegas and Humberto Lopez, leaders of the Sanitarios Maracay Workers Union and members of the Factory Committee elected by the workers' assembly. They were explaining to the people of Caracas who observed the march the development of their struggle, the attacks and false promises of the coup-plotting employer, Alvaro Pocaterra, and the decision of the workers to take over the company to prevent its closure, and how they had put it to work under their own control and how they are producing and selling bathrooms at affordable prices to the neighbouring communities.

The march stopped in front of the National Assembly for more than an hour, while waiting for the Spokespersons Commission to be met by a Commission of National Assembly Deputies. The march demanded out loud that the Deputies should come out. Finally one of the leaders of the struggle proposed that a commission representing the marchers would go in and meet the deputies. The commission was proposed by the Factory Committee and ratified by the workers, and was composed of national leaders of the UNT like Orlando Chirino and Stalin Perez, the regional leader of the UNT in Aragua Richard Gallardo, several workers of Sanitarios Maracay who had been elected by the workers' assembly for this purpose (including the two main leaders of the union, Villegas and Humberto), and Carlos Rodríguez representing Freteco and the Revolutionary Marxist Current (CMR).

The deputies of the National Assembly promised to fix a meeting between the workers and the Ministry of Light Industry and Commerce (MILCO), and to visit the factory on January 11. They also proposed to hold a meeting with the employer, with the presence of the workers, in order to study the situation of the company. Several workers showed their rejection of the behaviour of the National Assembly alternate deputy Marcela Maspero during the struggle, in which she has given support to the pro-bosses union that has been created by a small number of administrative staff who are acting as pawns of the employer within the company. The workers explained how, despite constant and reiterated appeals for unity and for them to join the occupation, this small group of leaders of the administrative staff decided, in agreement and with the support of the employer, to try to break the struggle and sabotage the occupation. 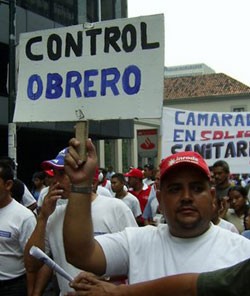 The workers demanded that Marcela Maspero should withdraw her support for this bosses' union and criticised the fact that the day before she had organised a meeting between several deputies and this group of employees, and a very small minority of workers who refuse to accept the majority decision of the workers' assembly and are sabotaging the struggle. "Yesterday they could only bring a small group of 20 people, today we are more than 1000. If anybody had any doubt, it is clear what the workers want: nationalisation under workers' control now and that the company continues to be managed by the workers", one of the workers explained passionately and emphatically.

It was at the door of the National Assembly that the march listened to the interventions of the leaders of different workers' organisations to support the demand of the workers of Sanitarios that the company should be expropriated. A very moving intervention was that of José Gregorio Quintero, Freteco leader, member of the CMR and part of the Directors' Board of Inveval. José Gregorio insisted that the only useful model to go forward to socialism and to put an end to the sabotage and the counter-revolutionary activities of the employers is to generalise the occupation and expropriation of factories all over the country. He stressed that Inveval is already producing under workers' control and greeted the fact that the workers of Sanitarios Maracay, even before the expropriation of the company, are doing the same. José Gregorio finished his intervention by appealing to the UNT, FRETECO and the working class as a whole to unite their efforts to deepen the revolution through the occupation, recovery and nationalisation of factories.

Leaders of the UNT in Carababo, Aragua and nationally, and also of the CCURA current of the UNT also spoke; like Emilio Bastidas, Ismael Sánchez and Stalin Pérez. A representative of the Mercal workers' union also spoke, and there were greetings from the workers and pensioners of CANTV. After this Andreas Bülow spoke in the name of the Hands Off Venezuela campaign. Andreas stressed the importance of the march and of the struggle of Sanitarios for the Venezuelan revolution as a whole, and explained what the Hands Off Venezuela campaign is and how HOV would adopt the struggle for the nationalisation of Sanitarios Maracay under workers' control. Next to speak was Rob Sewell, who gave greetings as a member of the National Union of Journalists and in the name of other unions in Britain which support the Hands Off Venezuela Campaign, and he gave a militant speech in the name of the International Marxist Tendency. Rob called on President Chavez to go forward to socialism, resisting the pressures of reformism and bureaucracy in the opposite direction and to rely on the strength and enthusiasm of the working class and the oppressed. Quoting the great Irish revolutionary Connolly he said "The great are only great because we are on our knees". These words were received with an enthusiastic ovation by those present at the march.

The last speaker was José Antonio Hernández for the Revolutionary Marxist Current. Jose Antonio started his speech by underlining the importance of the march and of the struggle of Sanitarios within the context the revolution is passing through. He explained the enormous victory of December 3rd as a victory of the people and the workers, and criticised those who want to deviate the revolution towards conciliation and negotiation with the right wing. José Antonio appealed for the revolution to be completed by expropriating the means of production and putting and end to the control over the economy by the capitalists, and building a new revolutionary state, a workers' democracy, putting an end to the bourgeois state of the IV Republic, which "though weakened, still exists". He called on the president to unleash the two swords of the struggle against bureaucracy and corruption of which he had spoken about in his speech on the night of December 3rd, and he appealed on all those present to remain firm in the struggle for workers' power and socialism.

Villegas, in the name of the workers of Sanitarios Maracay, also called on the workers to struggle for socialism and underlined that the workers of Sanitarios Maracay are proving that workers do not need bosses and that we can run and manage factories ourselves. He also thanked the support the workers have received in their struggle, above all those who have supported the struggle and the occupation from the very beginning. He explained that this struggle has already made history, by being the first time that a factory is occupied by the workers and starts to produce and sell products under workers' control and management. "I'd like to thank the Revolutionary Marxist Current, the UNT and the CCURA for their support, Orlando Chirino, Emilio Bastidas (UNT and CCURA leaders), and particularly comrades Carlos (CMR and Freteco) and Wanderci (from the Brazilian occupied factory Cipla and the movement of occupied factories in Brazil), who have been with us from the very first day" said Villegas, visibly moved.

The march ended in Avenida Urdaneta from where a commission went to Miraflores Palace to hand in the petition for nationalisation under workers' control to President Chavez. The workers organised, in the middle of the road, an exhibition of the bathroom components they are producing under workers' control and already selling in the factory, and gave away some to Caracas citizens. Passers-by commented on the high quality of the products.


This was truly an historic march. It was the real and genuine spirit of the working class taking over the streets of Caracas and pointing the way the revolution must advance. It is the only way that leads to victory. But above all it was a clear example that it is possible to go forward and that only the working class can guarantee this advance. The main aim of the march was achieved: to publicise the struggle, to show the unbreakable will of the workers and their families to continue the struggle until the end and to manage the company. This was shown to the whole of the revolutionary movement and to President Chavez himself, and they are now aware of the demand of the workers for nationalisation under workers' control.