Germany
Share
Tweet
Last weekend the IMT organised the 5th Northern European Winter School in Berlin. 150 comrades and sympathisers from many different countries came to a city with a great revolutionary history and tradition. We set ourselves the target of learning from the ideas and lives of Rosa Luxemburg and Karl Liebknecht, and to study the successes and the mistakes of the German Revolution. On Sunday we participated with a sizeable block at the traditional Rosa Luxemburg and Karl Liebknecht commemoration demonstration.

Last weekend, from the 9th to the 11th of January, the International Marxist Tendency organised the 5th Northern European Winter School in Berlin. The number of comrades and IMT sections participating was much greater in comparison to previous years. Around 20 to 40 comrades attended the Winter Schools in Copenhagen (Denmark), Ustron (Poland) and two times in Stockholm (Sweden) in the last years. That was already a success, but this year we had 150 comrades and sympathisers from Germany, Poland, Russia, Hungary, Slovakia, Serbia, Switzerland, Denmark, Sweden, Belgium, Britain, France, Italy and Austria coming to a city with a great revolutionary history and tradition. We also had guests and speakers from Pakistan, Venezuela, Brazil, Canada and the United States. The attendance clearly exceeded our expectations and put a big question mark over the name "Northern European Winter School". 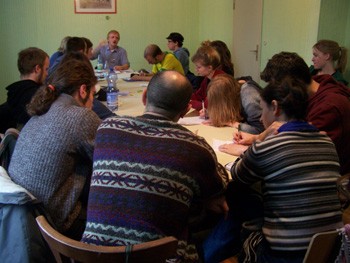 Ninety years ago the German revolution began with a naval mutiny in Kiel. Sailors and dockers surged through the streets and took control of the town. Within a week sailors', soldiers' and workers' councils sprung up in most of Germany's major towns, including Berlin. In order to crush the movement, the black forces of reaction decided that it had to be beheaded. In co-operation with the Social Democratic government minister Philipp Scheidemann, an unofficial price of 100,000 German marks was put on the heads of Karl Liebknecht and Rosa Luxemburg.

On January 15th, 1919, they were arrested. Karl was shot, allegedly while trying to escape. Then an officer used his rifle butt to smash Rosa's skull. Her corpse was thrown into the Landwehr Canal. The German proletariat had lost two of its most outstanding leaders. This year, like many previous years, a big demonstration was held to commemorate this event. As this was the 90th anniversary, we decided to have our Winter School in Berlin and participate in the demonstration. We also set ourselves the target of learning from the ideas and lives of Rosa Luxemburg and Karl Liebknecht, and to study the successes and the mistakes of the German Revolution. Only with a deeper understanding of the processes of previous revolutions will we be able to achieve the socialist revolution which lies in front of us. In the light of the world crisis of capitalism, this task is posed in an even sharper way than before. 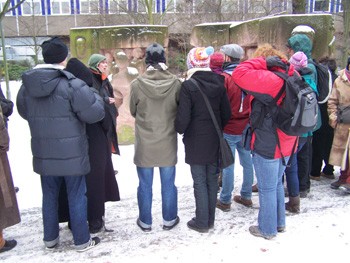 We started the School on Friday with a walking tour about the history of Berlin with Heiko Khoo, an eye-witness to the fall of the Berlin Wall. We became acquainted with Berlin from its origins 1237 to 1914, the period of the First World War, and the German revolution 1918. We were taught about the interwar years, the rise of Fascism and the fate of the Berlin Jews. We went to the Humboldt University where Hegel taught and Marx studied, also the site of the famous book burning. Then came the sites about Berlin from 1945, Berlin under the allies, the breakdown in the wartime alliances, the division of Berlin, the establishment of sectors, the global Cold War, the economic and military conflict between the powers, the establishment of the West and East Germany and the special role of Berlin in the Cold War. Heiko spoke about the Stalinism under Ulbricht and the building of the Berlin Wall. We visited, amongst many other places, the site of the foundation of the Communist Party and where Liebknecht called for an end to the War in 1916 and was arrested.

The revolution and counter revolutions of 1989 and the collapse of Stalinism were summarized by Heiko in a workshop on Saturday with an account of the events and investigations of the complex tactical issues which confronted our comrades at the time. Two workshops dealt with the German revolution from 1918 to 1923. One was held by Marie Fredriksen from Denmark, and the other one by Hans-Gerd Öfinger from Germany. We learnt about the role of the USPD (Independent Social Democrats) and the revolutionary shop stewards from Berlin in the revolution. We dealt with the events that led to the formation of the KPD (Communist Party of Germany) at the end of 1918. We studied in detail the life of our comrade Rosa Luxemburg in three workshops. Andreas Wolf from Austria spoke about her ideas on building a revolutionary party and Frederik Ohsten lead off on her struggle against the war. Ian Aylett explained her approach to the question of Reform or Revolution. 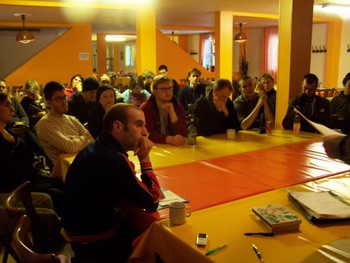 The Russian revolution of 1917 was not only the impulse for the German Revolution of 1918, but we saw a wave of revolutionary uprising all over Europe. Peter from Hungary did his workshop on the Hungarian revolution of 1919. Comrade Lal Khan came all the way from Pakistan and spoke on the Pakistani revolution of 1968 and introduced his new book about these events (See introduction to "Pakistans Other Story"). Serge Goulart from the Movement of Occupied Factories in Brazil inspired us with a report about Factory occupations in Brazil and the whole of Latin America. Zuza from Slovakia spoke about her struggle against US Steel.

Because of the recent events in Gaza we changed our session plan slightly, and Alan Woods led a workshop about the war in Gaza and its wider implications for the Middle East (see Audio file). Alan also held one workshop on Philosophy and one on Art. There was a whole range of other interesting workshops:  The crisis of the Social Democracy in Poland (Wojtek Figiel, Poland); Woman and revolution (Lis Mandl, Austria); The financial crisis and its political consequences (John Peterson, U.S.); The Paris Commune (Greg Oxley, France); Nationalisation and workers control (Martin Lööf, Sweden); The Venezuelan revolution (Patrick, Venezuela); The origins of the family, private property and the state (Jonathan Clyne, Sweden). 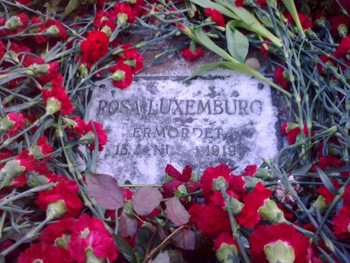 Because of the coming together of comrades from many different countries and the interesting workshops, the mood during the School was very good. What surprised the comrades who had been in the International already for a longer period was the commitment to Marxist ideas and the high political level of the younger comrades. During the interventions in the workshops one could see that comrades have read about many subjects and prepared for the School beforehand. It was a good meeting for comrades who hadn't been at an international meeting before. They got an idea what the International is and how the comrades in the different sections carry out revolutionary work in their countries. This mood expressed itself in energetic singing of the Internationale at the end of the seminar, and in 350 Euros for the collection we organized later. This money for the international fighting fund will help to build the International and help for example to finance trips of comrades from Latin America, Asia and Africa to attend our congresses and schools. The high number of financial contributions is even more impressive, as we just had a Winter Collection in which every section participated, and comrades had to pay for their trips to Berlin and the accommodation during this weekend. After the political impact this School had on comrades, they were prepared to give even more money to the International. Of course, one does not live by politics alone. We enjoyed ourselves and let the School fade away in a rollicking party Saturday night. 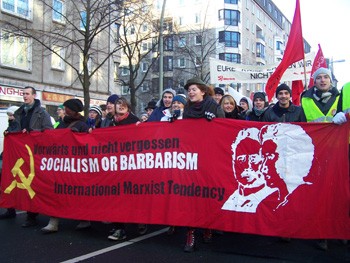 On the next day we participated with a sizeable block at the traditional Rosa Luxemburg and Karl Liebknecht commemoration demonstration, which went from the Frankfurter Tor to the Zentralfriedhof Friedrichsfelde (a cemetery with the memorial site for the two murdered revolutionaries). Tens of thousands of people participated in the march, and 80,000 in the wreath-laying ceremony. We took the good mood from the previous days with us and sang "Bella Ciao" and shouted revolutionary slogans in German, English, Spanish, Italian and other languages. On our banners, which different sections painted and brought to Berlin, we wrote "Vorwärts und nicht vergessen" ("Forward to the future, don't forget the past"), "Socialism or Barbarism" and "We don't pay for your crisis." This shows that 90 years after the beginning of the German Revolution, the problems of the capitalist system are still not solved and the need for the ideas of Rosa Luxemburg and Karl Liebknecht - the ideas of the socialist revolution - are posed more than ever. There was also a big opposition against the war in Gaza, which was expressed in many banners taking up this cause. At the end of the demonstration we had a book stall with books and other material from many IMT sections. We sold our journals, gave out leaflets appealing for people to join the IMT in our struggle for socialism. We made a lot of contacts, who we will invite to our future meetings and discuss our ideas with.

This Winter School is another important step in building the forces of the International Marxist Tendency, in forming the cadres to carry out the socialist revolution - the only real memorial for Rosa Luxemburg and Karl Liebknecht.