Sweden
Share
Tweet
Over the weekend of the January 6-7 a Northern European Marxist School was held in Stockholm, Sweden. There were around 40 people present from Sweden, Denmark, Poland and Great Britain. The school was organised by the Marxist tendency in the Swedish Labour Movement gathered around the paper Socialisten. 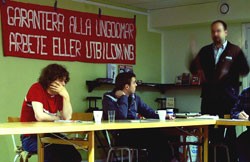 Over the weekend of the January 6-7 a Northern European Marxist School was held in Stockholm, Sweden. (Last year it was in Copenhagen, Denmark.) There were around 40 people present from Sweden, Denmark, Poland and Great Britain. The school was organised by the Marxist tendency in the Swedish Labour Movement gathered around the paper Socialisten.

The topics discussed were the history of philosophy, revolution in Latin America, our organisation and how it works, and reports of the work of our organisations in Poland, Denmark and Sweden. The aim of the school was to increase everybody's political understanding, to get together to share ideas and experiences from our different countries, and to introduce our organisation to people interested in our ideas. 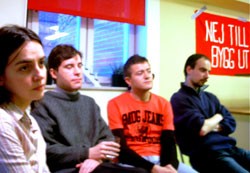 Hans Åkesson introduced the discussion about philosophy. He based his speech on his Swedish translation of Alan Woods' unpublished book, The History of Philosophy. One reason for his translation was that he felt that there was a lack of good material explaining the philosophy of Marxism - dialectical materialism. There is more to be said about dialectical materialism than the oft quoted example that quantitative increases in heat eventually lead to a qualitative change of water from a liquid to steam. Even if we are not always aware of it we use dialectical materialism when we make a political analysis, write about political and economic perspectives, and so on. If we consciously understand dialectics our analysis can become even sharper. Therefore it is an essential part of our Marxist training. 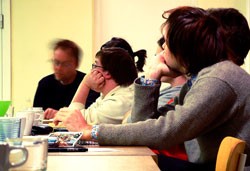 Jorge Martin from In Defence of Marxism and Hands off Venezuela reported on Latin America, a continent where a revolutionary process has been unfolding during the last years. In several countries the masses have awoken to political life, overthrowing unpopular governments. However, because of the lack of a revolutionary party several favourable situations have been lost. The key to the revolution in Latin America is Venezuela, where the revolutionary process has developed the furthest. The situation is very favourable to the revolution. Unfortunately, the bureaucracy, the reformists and sectarians are acting as a brake. The good thing is that we have comrades present there who are active in the movement. The problem is that they are not enough and that the revolutionary situation will not last forever.

Egil Karlow pointed out in his introduction that our organisation's ultimate goal is socialism. We have to build an organisation that is capable of overcoming the pressure of capitalist society. One of the keys to doing this is to have good political discussions. Through this we will be able to develop our ideas which is essential for the survival of our organisation. We cannot use organisational methods to solve political problems if we do that we will end up in a mess.

Poland might not be the heart of the World revolution, but through our work we are making contacts with different people, showing that there are people in Poland interested in our ideas, despite the experience of Stalinism and the propaganda against Marxism and revolution. We are getting contacts with members of the DLA (Democratic Left Alliance, to a great degree the continuation of the ruling Stalinist party). Our comrades are working on the editorial board of the New Popular Weekly which is the only nationwide trade union magazine in Poland and the trade union paper for the largest Polish trade union federation OPZZ.

In Denmark our comrades have passed through a hectic year. First they fought against an attempt to expel them from SUF (socialist youth organisation) and were active in many different struggles. Now they will take time to recover and focus on studies, solidarity with Venezuela and starting on trade union work.

In Sweden the election of a right-wing government (thanks to misleaders of the labour movement) has produced discontent and trade union demonstrations that have not been seen for some time. The main field of work right now is solidarity with Latin America, the struggle against the government and trade union work.

Over the weekend there were good discussions that will help us in our struggle for a socialist world. A collection was held for the international fighting fund which raised more than 300 Euros. Most likely all participants are looking forward for next year's school, which will probably be an even greater success.