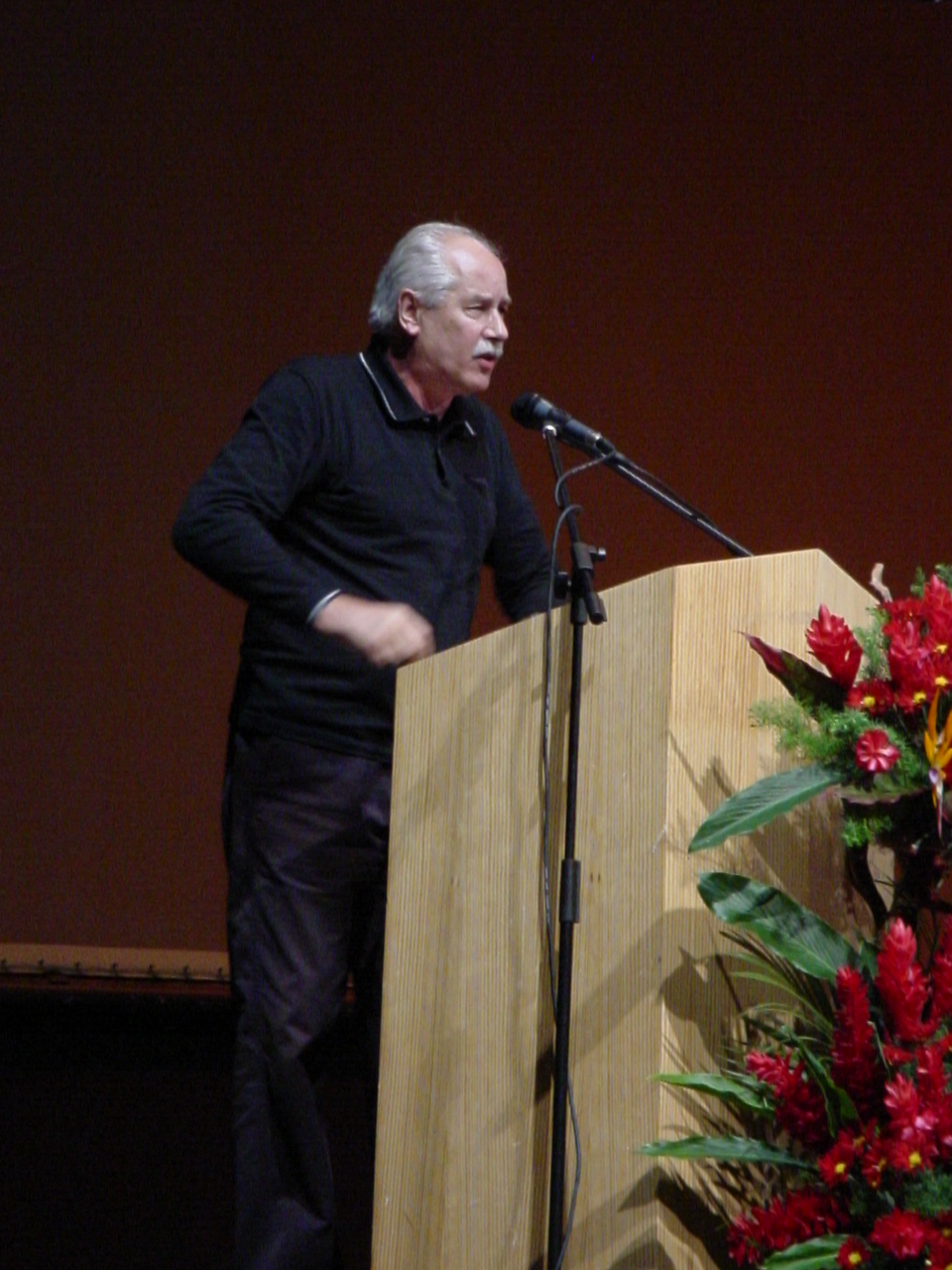 No sooner had I finished my article, Venezuela: counterrevolution raises its head - Heinz Dieterich and General Baduel (parts One and Two) when I was sent yet another of Dieterich's articles, which the Professor seems to produce with the same ease as a machine churning out sausages. This time it was a reply to my Cuban friend and comrade Celia Hart, who has clearly incurred the Professor's wrath by her negative comments on the very same article I have dealt with here.

In his reply to Celia, Professor Dieterich drags in everything under the sun and a few other things as well: from Heisenberg's uncertainty principle to Bertold Brecht. Let us be thankful at least that he did not get onto the subject of cylindrical universes!

This is very typical of comrade Dieterich's method, which systematically attempts to cloud the waters of any debate by introducing vast quantities of extraneous matter. I have already commentated on this irritating mannerism in my article and will have a lot more to say on the subject in my soon-to-be published book, which I am tempted to call Anti-Dieterich.

In her article Celia asks a very simple question, which deserves a very simple answer: are you on the side of the "no" vote or the "yes" vote in the December referendum? I consider this question to be so simple that a child of six could answer it. But some university Professors do not seem to be as good at answering questions as children of six.

Here is another simple question - closely related to the first: are you with Baduel or with Chavez? Yet again, the university Professor is either unable or unwilling to answer a simple question. Instead of answering, Dieterich complains that Celia has not asked the right question. We recommend all Professor Dieterich's students to write this on their next examination paper when they are presented with a question they cannot answer.

The situation in Venezuela, he informs us, is not binary. By this he means that there is not a simple choice between two sides, but the situation is much more complicated. We can agree that the situation is complicated but there are certain moments that are defining (and Dieterich has already defined the referendum as such a moment), in which one has to decide. That is the case here.

In the December referendum you do not have an infinite number of choices but only three: to vote yes, to vote no or to abstain (I include a blank vote in this option). This is a very practical question, and if Professor Dieterich can leave Werner Heisenberg, Bertold Brecht and Albert Einstein to their fate for a moment, we would like him to answer in plain language (we do not care if it is German, Spanish, Latin or Chinese): what do you recommend the people of Venezuela do in the referendum?

Dieterich says that the choice between Chavez and Baduel is a "false" choice. He is like a child that wishes to have his cake and eat it at the same time. But as every child knows, that is not possible. He does not like the analogy between what is happening in Venezuela and a boxing match. But it is rather a precise analogy, even if you do not like it.

What we are seeing in Venezuela is a pitiless struggle between mutually exclusive interests. In plain language, it is called the class struggle. There was a time (a long time ago) when Heinz considered himself a Marxist, and therefore he ought to know what the class struggle is. But these days he does not want to hear about the class struggle but only moderation and compromise. That is, he has abandoned Marxism in favour of vulgar reformism.

He accuses Celia Hart of not seeing the reality of Venezuelan society and politics but of imposing her "model" on Venezuela. In reality, it is Heinz who does not see the reality of Venezuelan society and politics. He does not see what is evident: that the main feature of the present situation is a brutal polarization between the classes. In such a situation one has to make a choice. Heinz does not wish to make a choice. That is his problem. In two weeks time a choice will have to be made.

Leaving aside the content of his reply to Celia Hart, the tone is extremely condescending. He speaks like a schoolmaster lecturing a little child. This does not bother us in the slightest. But what is it based on? Heinz regards himself as a supreme realist, a master of Realpolitik. He does not understand why everybody is creating such a fuss about constitutional reform. He says: "The tragic thing about the situation is that there exists a simple method for resolving the conflict."

What is this simple solution, which nobody except Heinz has ever thought of? To vote the Constitution point by point! That is what Heinz proposes, and if only they would listen to him, everything would be fine.

In what way would this "simple solution" solve the problem? The controversial points would still remain controversial if they were voted on singly. The only difference would be that the voting would be far more complicated, would be dragged on for many weeks if not months, generating even more conflicts, bitterness and resentment. In other words, it would solve nothing at all.

What the "realist" Dieterich would really like is for Chavez and Baduel to embrace and be good friends again. This means he wants to unite the Revolution with the Counterrevolution. In the Bible lambs lie down happily with lions. But in real life, a lamb that attempted this would be asking for a most unpleasant experience.

This is the kind of "realism" that our friend is advocating. But he must know that it has already been tried in Venezuela. After the failure of the coup of April 2002 Chavez (probably following the advice of Heinz Dieterich or others like him) tried to negotiate with the counterrevolutionaries. What was the result? Only a new counterrevolutionary offensive that nearly brought Venezuela to its knees and destroyed the Revolution.

The same mistake has been repeated several times since - and always with the same result. Why? Because the Venezuelan bankers, landlords and capitalists are unreasonable or have not understood the need for the "third way"? No, that is not the reason. The reason is that in order to achieve its objectives the Revolution must make inroads into private property. It must nationalize the commanding heights of the economy. The oligarchy is fighting to defend its wealth, power and privileges. That is all.

Heinz Dieterich is against all this. He believes that Socialism of the XXI Century can be achieved without nationalizations or expropriations, which will only "provoke the counterrevolution". He believes the capitalists will eventually be convinced of the virtues of an "economy of equivalence" in which profits simply disappear and everybody receives the true value of his or her labour.

He believes that all this can be achieved without any unpleasantness. That is the model that he, Heinz Dieterich, seeks to impose on Venezuelan reality, which has absolutely nothing to do with it. And this is supposed to be great political realism! It is the realism of a man who wants to teach a tiger to eat salads instead of flesh.

I have dealt at length with Heinz Dieterich's theories in my forthcoming book and therefore will say no more about them here. Suffice it to say the following: if we were to follow the same line of argument, the Cuban Revolution would have never succeeded in overthrowing capitalism. There were plenty of elements who participated in one way or another in the early stages of the revolution but when this became radicalized and broke decisively with capitalism and imperialism, they joined the ranks of the counterrevolution. Amongst them was the first president of Cuba after the overthrow of Batista, Urrutia who went into exile to the United States amidst protests about the "Communist turn" of the revolution, and Hubert Matos, who had participated in the revolutionary war but then went over to the counterrevolution, also complaining about the "Communist course" the revolution was taking. According to the theory of Heinz Dieterich, Fidel Castro should have abandoned ideas of the nationalization of the economy and reached an amicable agreement with Urrutia and Matos. In fact, had he done that, the revolution would have been quickly smashed.

Similarly, Simon Bolivar would never have taken on the might of the Spanish empire and Lenin and the Bolsheviks would never have taken power in Russia 90 years ago. If Professor Dieterich had been present he would have given them excellent advice: that there was no "binary" situation, that another alternative could be found, that they must negotiate "out of necessity not love", and so on and so forth.

There have always been people like Heinz Dieterich. Fortunately for human history and progress, they have been overruled by men and women who were prepared to fight and to risk all for the victory of the Revolution.

For the rest, I am pleased to note that I have answered Dieterich' s arguments in advance in the above article.