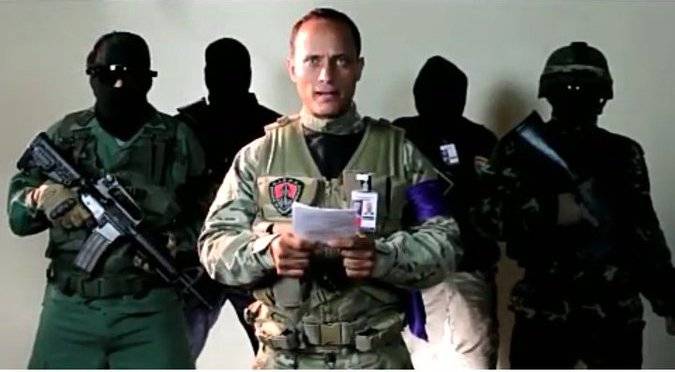 Things in Venezuela are changing by the day, sometimes by the hour. Yesterday, June 27, a police officer commandeered a helicopter and attacked the buildings of the Ministry of Interior and Justice and the Supreme Court of Justice, at the same time broadcasting an appeal for others to join in and overthrow the government of Maduro.

This attempted coup follows heavy rioting in Maracay on Monday, June 26. The opposition, which has declared itself in a state of “disobedience”, has called for 4 hours of road blockades for today, June 28, using insurrectionary language.

The helicopter attack was carried out by Oscar Alberto Perez, an officer of the CICPC (Venezuela’s Penal, Criminal and Scientific Investigation Police Agency), who had served in the agency’s Special Aerial Brigade. Acting with another person and using his police ID he managed to board a CICPC helicopter from the La Carlota Aerial Base in the east of Caracas which he then flew into central Caracas.

At the same time he released a series of videos on his Instagram account (https://www.instagram.com/oscarperezgv/) in which he explained that he was part of a network of officers in the security forces and the army with links to civilians which was demanding the removal of president Maduro. From the helicopter the would be golpistas draped a flag with the words “350 Libertad”. This refers to article 350 of the Bolivarian constitution which allows for civil disobedience in the face of a regime or authority trampling on democratic or human rights, and which has been invoked by the opposition in the last few days in its attempts to overthrow the government.

So far the call for a coup against Maduro has not been seconded by any other forces in the security agencies nor the military, or at least no such moves have been made public. However, after 90 days of constant and increasingly violent protests and repeated appeals on the part of the reactionary opposition for the army to intervene and overthrow the president, it would be surprising if there were not elements within the state apparatus considering their options.

The helicopter attack and appeal for a coup created a very tense situation in Caracas and other cities. There were opposition protests and attempted rioting in a number of places, mainly in the middle and upper class neighbourhoods, but this time also in some working class and poor areas (including Manicomio and Caricuao).

In the last few days the opposition seems to have gained momentum again. Their road blockades have had a better response from their own ranks. The rioting in Maracay, Aragua, was very severe, with over 64 establishments looted, a number of official buildings, including the PSUV offices, ransacked and one GNB police officer killed by gunfire. Last weekend we saw repeated attacks by violent rioters against the Military Airbase of La Carlota in Caracas, where the opposition terrorists removed the heavy perimeter fence and entered the premises. They were armed with homemade rocket launchers, molotov cocktails, home made grenades, etc. One of the rioters was killed by Air Force Police when attempting to lob a grenade into the air base.

What we are seeing here are not peaceful pro-democracy protests, but a combination of terrorist attacks, appeals to the army to carry out a coup by opposition politicians, and now a helicopter attack against state institutions. None of this would be allowed in any other country in the world. Just imagine if violent rioters assaulted a military airbase in the centre of Madrid, London or Washington DC. Imagine a situation in which individuals opened fire on security forces from within the ranks of demonstrators in Paris or Berlin.

In a speech before the attack, president Maduro warned of the possibility of a coup and said that if anything were to happen to him there should be a “military-civilian uprising like that of april 13 [2002], but a 1000 times more powerful”. He added that “if the country was to be engulfed by chaos and violence and the Bolivarian revolution crushed, we would fight back, and what could not be achieved by votes we would achieve by arms”.

The problem is that the situation is not like that of April 2002 at the time of the coup against Hugo Chavez. For some years now there has been a profound process of disillusionment amongst the Bolivarian masses. This is the result of the behaviour of the bureaucrats and reformists within the Bolivarian movement, the corruption of state and party officials, the attacks on the revolutionary initiative of the masses, etc. All of this combined and aggravated by the severe economic crisis and the inability or unwillingness of the government to take the necessary measures to address it. That would imply dealing severe blows against the oligarchy - bankers, capitalists and landowners. Instead, the government has been following the opposite policy: of making concessions to them, providing them with dollars at preferential prices and making appeals for them to invest and be productive. This however is not enough for the capitalist class, which is continuing its campaign of sabotage and attempting to overthrow the government, with the full backing of US imperialism.

In these conditions it is doubtful whether the revolutionary people, which has saved and defended the revolution, would now turn out once again in sufficient numbers to reverse a coup. In fact, it is doubtful even whether they will turn out in sufficient numbers to give legitimacy to the Constituent Assembly elections on July 30.

The only way to combat the reactionary opposition would be through the revolutionary mobilisation of the people. That this is possible is shown in the isolated instances of armed self-defence in Guasdalito and Socopó (http://www.resumenlatinoamericano.org/2017/06/05/venezuela-nacen-brigadas-chavistas-para-defender-los-territorios/), for instance, and in the land occupations of estates belonging to landowners who have been financing the rioting in Pedraza, Barinas (http://www.latabla.com/campesinos-de-barinas-inician-el-rescate-de-finca-de-terrateniente-que-presto-retroexcavador-para-saqueos-en-socopo/) and Obispo Ramos de Lora, Mérida (http://www.latabla.com/campesinos-de-merida-rescatan-tierras-de-un-terrateniente-financista-de-la-violencia/). Also, on Monday, June 26, workers from the Guaraguao PDVSA refinery in Puerto la Cruz took the initiative to disband an opposition road blockade at a roundabout near their workplace, sick and tired of days and days of being blocked by a small number of opposition supporters (https://twitter.com/gaspatriota/status/879434316501090305/video/1).

However, for this to happen on a generalised level two conditions would be required. One, that a clear lead was given from the top at a national level. This has not happened. No such lead for revolutionary activity of the masses, including land and factory occupations, armed self-defence, etc. has come from the government, nor the national leaders of the Bolivarian union CBST.

The other condition is that the workers and peasants feel there is something worth fighting for. If what they see is constant price hikes while the government makes concessions to the capitalists and keeps paying the foreign debt, then it becomes much more difficult to organise and mobilise to defend it against reaction.

The precise outcome of this conflict is difficult to predict. This is a struggle of living forces. The reactionary opposition could eventually succeed in overthrowing the government through a combination of chaos and violence on the streets with mass demonstrations, which would finally push a section of the armed forces to organise a coup against the president. Faced with a prolonged stalemate in which no side can decisively win, combined with large scale rioting and looting, the armed forces or a section of them, might decide to step in, remove the president and move towards a “transitional” government involving former “chavista” officials, as well as “moderate” oppositionists.

The more intelligent sections of the ruling class (if such a thing exists in Venezuela) understand that the leaders of the opposition command no support amongst wide layers of the population and would not be adverse to some sort of “technocratic” government implementing the brutal austerity measures against the working class which they require, perhaps led by a businessman like Mendoza, the owner of Polar, who has been careful to keep quiet in recent months.

Another factor to consider is that, despite the level of demoralisation of the revolutionary masses, there is still a sizeable core of people who are prepared to mobilise against the forces of reaction (though there is a growing feeling that repeated mass demonstrations do not serve that purpose). Any attempts of a reactionary government to roll back major gains of the revolution (privatise social housing, mass lay offs, attacks on revolutionary activists and their organisations, closing down of the Bolivarian University or UNEFA, eviction of peasant cooperatives from expropriated landed estates) would be met with fierce resistance by those affected. A section of the revolutionary masses is now armed and such clashes could, under certain circumstances, lead to armed confrontations, terrorist actions or perhaps even descend into civil war. While many top army officers would be looking after their own interests (in business, corruption, etc) and supporting whichever side seems more likely to guarantee them impunity, it is not ruled out that sections of the troops and lower ranking officers would be loyal to the revolutionary people.

What can be said is that the situation is very serious. A victory of the reactionary opposition would be paid dearly by the masses of workers, peasants and the poor in the barrios. This week alone three people were set on fire by opposition protesters. One was stabbed and set on fire by masked thugs in La Castellana, Caracas, who thought he was a chavista (https://twitter.com/NestorReverol/status/879506185380139008). Two youths were threatened with guns and then set on fire at an opposition barricade in Barquisimeto, Lara, when they identified themselves as Chavistas (http://albaciudad.org/2017/06/estan-graves-dos-jovenes-quemados-en-barquisimeto-por-decir-que-eran-chavistas/). Just imagine if these people were to come to power! The ruling class in Venezuela has had a fright. They have lost control of the situation for a number of years. When they come back to power they will be hungry for revenge and they will unleash the howling packs of the frenzied middle class onto anyone who has supported the Bolivarian movement and against the working class and the poor in general.

In the words of French revolutionary Saint Just, “those who make half a revolution, dig their own graves”. The tragedy of the Bolivarian revolution is that it was never completed. Now we are paying the price.