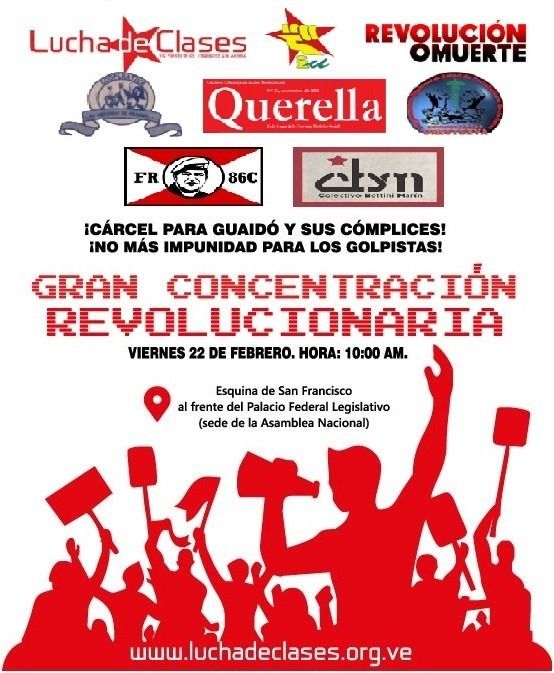 The Venezuelan section of the IMT, Lucha de Clases, launched an appeal for a rally against imperialist aggression and demanding revolutionary measures to confront it. This was taken up and agreed by a number of revolutionary organisations in Caracas. A rally will take place today on the basis of the following statement.

In Venezuela, a new reactionary coup attempt, led by imperialism and the oligarchy, is underway. 20 years since the imperialist-backed ruling class lost direct control of the Venezuelan state, the White House has decided to reestablish its grip by resorting to relentless diplomatic, economic and military pressure against the government of Nicolás Maduro. The goals pursued by the US are known to all: to control the innumerable riches of Venezuela, to crush the Bolivarian Revolution and to make an example of the Venezuelan people to discourage popular and workers’ movements of the continent and the world. We have arrived at a decisive and defining moment in the national class struggle. The situation demands a forceful, revolutionary response.

With the self-proclamation of Juan Guaidó as President in Charge of Venezuela, an attempt has been made to erect a parallel government under the remote control of the White House. The imperialist puppet that heads the National Assembly (AN), which is under the majority control of the opposition, has begun to appoint diplomatic representatives abroad and also to management of state companies abroad like CITGO. This illegal initiative, led by the US, has been endorsed and recognised by numerous Latin American governments in the service of Washington: the infamous Lima Group and the OAS. The European Union (EU), which has also sided with Guaidó, has created a Contact Group together with several states of the region with a view to facilitating a negotiated exit for Maduro under the guise of "free elections".

Yankee imperialism has kidnapped enormous financial resources belonging to the Venezuelan state - more specifically the BCV - with the promise of transferring them to its puppet. The Bank of England has done the same, preventing the repatriation of US$1.2 billion in gold belonging to the Venezuelan state. Also, on Monday 28 January, the White House announced a series of sanctions against PDVSA, which include the retention of assets in the US amounting to US$ 7,000 million and the blockade of Venezuelan oil exports. Also, these measures impose restrictions on energy companies supplying raw materials, components and diluents necessary for the oil sector, and the production of derivatives, which seriously compromises the operations of PDVSA.

The intention of US imperialism is quite clear. Along with the diplomatic and economic attacks, there have been countless threats of military intervention by Trump, Pence, Pompeo and Bolton. In addition to meeting between General Mark Stammer, Commander of the Southern Command, and representatives of the Colombian government in recent days, there has been increased transportation of American military aircraft through several Caribbean islands, and also the diversion of the British Royal Navy towards Curaçao (80km from the Venezuelan coast). Additionally, Trump has commissioned Elliot Abrams as Special Envoy for Venezuela, the same person who organised logistics and financing for the Contras in Nicaragua, and supported the operations of the death squads in El Salvador and Guatemala three decades ago.

Under the pretence of providing "humanitarian aid", Yankee imperialism hopes to create a situation of extreme tension on the Venezuelan borders - especially the border with Colombia - with the entry of supposed shipments of medicines and food, without authorisation from the official government, and using civilians - organised in assistance brigades - like cannon fodder. Juan Guaidó has announced that on 23 February "humanitarian aid" will enter the country, which is why he has intensified his invitation to the FANB to execute a military coup as soon as possible. On the scheduled date, a possible violent confrontation and even an eventual massacre - perpetrated by mercenaries - may provide the perfect excuse to initiate a direct intervention of US troops in our country.

Those of us who subscribe to this declaration strongly repudiate the interventionist, destabilising and coup-plotting manoeuvres of US imperialism against Venezuela. For revolutionaries, it is imperative to prevent the return of the right to power regardless by any means. One scenario is the Guaidó Country Plan, which will plunge the country into severe debt - this time to the IMF - and thus speed up privatisation of state companies and public services. This will be accompanied by brutal labour and social counter-reforms, which will deepen the great austerity suffered by the working people today. To undertake an aggressive, macroeconomic adjustment policy with the least possible resistance, the ruling classes demand the crushing of popular and workers' organisations, who will not endure these policies lying down. The targeted assassination of community leaders, working-class and peasant trade activists; the ruthless persecution of the entire left and the curtailment of the most basic democratic guarantees - there will be no hesitation in the implementation of such measures. In addition, there will be revenge exacted by violent right-wing groups against Chavismo, which will be made to pay for so many years of defeat and political marginalisation of the right.

The policies of class conciliation and half-measures executed by the government have been shown to be detrimental to battling reaction. We have witnessed constant appeals for peace and consultation, aimed at the same sectors that are preparing to drown the revolution in blood. On the other hand, with the resurgence of imperialist pressure, the government has granted new concessions to the capitalist class, such as the recent measures of exchange liberalisation and the devaluation of Bolívar at a level higher than the parallel market of dollars, both of which are detrimental to the interests of the workers. This policy leads to the demoralisation of the working class and the people, who are the motor force of the revolution and the only ones who can save it from the present threats.

Given all of these potential scenarios, it is necessary to undertake a series of firm and decisive actions, not only to defeat the current imperialist offensive, but also to implement structural solutions to all the calamities that the working masses suffer today. As for the need to abate the threats of reaction: it is necessary to arrest Guaidó and dissolve the pro-imperialist AN, which serve as the main agents of internal destabilisation at Washington's service. The inaction in this area has allowed the US puppet and his accomplices to proceed with their coup agenda without the slightest restriction. Recently, Guaidó said he did not rule out authorising a foreign military invasion.

On the other hand, it is imperative to implement a policy based on the organisation and armed intervention of the masses on the internal level, and a call to internationalists to support the Bolivarian Revolution from without. Regarding the first, Maduro called weeks ago for the strengthening of the Bolivarian militias, with the establishment of more than 50,000 Popular Units of Defense throughout the country. However, after the presidential announcement we have not seen concrete actions significant enough to organise popular defense in the neighbourhoods, nor by the workers in the factories and in the institutions of the state. Understanding the dangers present in the situation, where the ruling classes can provoke an armed civil confrontation or a foreign military intervention, we revolutionaries have the right to demand that words be translated into action. Although we repudiate the possibility of war, the violence that the bourgeois reaction is willing to unleash forces us to be prepared.

The foregoing, in turn, must be linked to the struggle to improve living conditions for Venezuelan workers, removing the enormous burden of the crisis from their backs and placing it on the shoulders of the ruling classes. Given the urgent need to prevent the return of the right to power, revolutionaries must fight the new reactionary attack, but not to maintain the current, chaotic and degrading state of affairs. Instead, we must build a new society worth living for, and worth defending with our lives. In this sense, and considering the strong US sanctions on the Venezuelan economy, it is necessary to confiscate all the imperialist monopolies in the country, but also the national companies involved in the coup, and place them under workers' and popular control. This must be accompanied by the cessation of payments of foreign debt, the nationalisation without compensation of the banks, and the establishment of a state monopoly on foreign trade, thus acquiring resources to finance a revolutionary economic emergency plan and facilitate the establishment of a planned economy under democratic control of the working class and the people. The nationalisation without compensation of the large estates under the control of peasant councils and rural communes must also be central to this programme.

Prison for Guaidó and his accomplices!

No more impunity for the coup plotters!

Dissolution of a pro-imperialist National Assembly!

Arm and deploy the Bolivarian militias!

Confiscation of the imperialist multinationals and national monopolies involved in the coup!

No more concessions to the parasitic bourgeoisie!

Make the capitalists pay for the crisis!