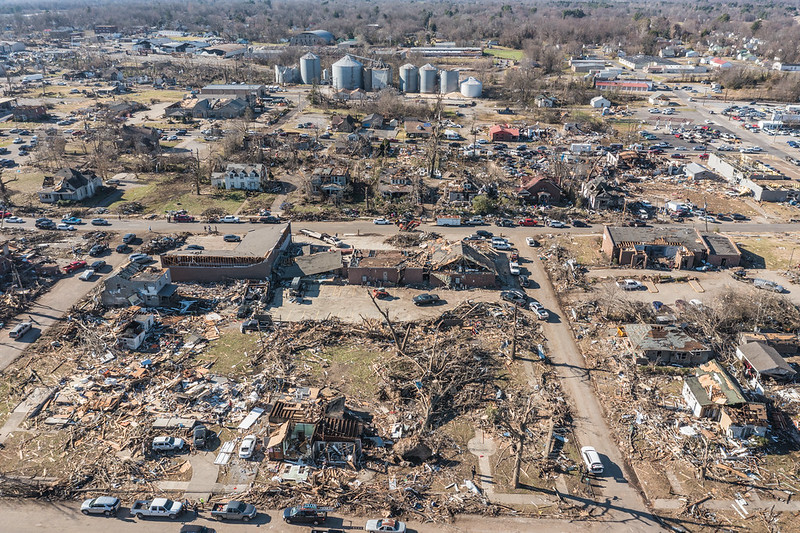 Over the past several days, a massive tornado outbreak in the US has led to a series of deaths in workplaces, due to the bosses’ refusal to take even minimum steps to keep employees safe. Tragedies such as these amount to corporate murder. They expose the callousness inherent to capitalism, which sacrifices workers’ lives on the altar of profit on a daily basis.

In Illinois, last Friday, six died as an Amazon warehouse collapsed, after the requests by workers to leave during the storm were refused. Then on Monday, at least eight workers at the Mayfield Consumer Products candle factory in Kentucky were killed, after being told that if they left work to hide from the storm, they would be fired. In both instances, workers were forced to choose between their lives and livelihoods.

In Illinois, the collapse of the Amazon warehouse once again exposed the company’s infamous health and safety record.

I'm an Amazon worker in Kentucky, tornado hit 2 miles from my house and I physically couldn't get to work for my shift. The ERC team told me that they had no record of tornadoes in Kentucky and couldn't help me with not getting attendance time reduced for today

Aside from hundreds of workers sustaining serious injuries over the years due to a lack of training and exhaustion arising from unreasonable targets, 20,000 Amazon employees became infected with COVID in 2020, due to insufficient precautions being taken in overcrowded warehouses.

Many of the survivors of the tornado said they had never received any emergency training and had never experienced a fire or tornado drill while at work.

The main reason for the lack of emergency training is that it cuts into profits. Time spent doing proper tornado drills at work could otherwise be devoted to packaging parcels for delivery. It is clear where Amazon’s priorities lie: exploiting their workers for every drop of profit.

Marcos Ceniceros, an organiser at Warehouse Workers for Justice, which has called for a hearing on safety practices at Amazon, said: “This is not the first time we’ve seen workers suffer at Amazon and we want to make sure that they’re not continuing to cut corners and putting workers at risk.”

Horrifying details are emerging about the tornado disaster at Amazon's warehouse in Illinois, where at least 6 workers were killed on the job.

Before he died, Larry Virden reportedly texted his girlfriend: "Amazon won’t let us leave." He leaves behind four children. pic.twitter.com/3ZRLik9VIs

Amazon has had a ‘no phone’ policy for a number of years. Although this policy was temporarily revoked at the beginning of the pandemic, there have been reports that it was unofficially reinstated (in order to prevent ‘slacking’ and maximise productivity) in the warehouse which collapsed. Thus, many workers were not allowed access to the outside world and were consequently not able to access the latest weather warnings.

One Amazon worker from another facility in Illinois told Bloomberg: “After these deaths, there is no way in hell I am relying on Amazon to keep me safe… If they institute the no-cellphone policy, I am resigning.”

But the main reason for the tragedy was that Amazon refused to allow workers to leave, despite the danger from the storm.

Cherie Jones, girlfriend of Larry Virden, an Amazon truck driver who died in the collapse, has shared their final text message exchange in which he says that Amazon “won’t let us leave.” Virden was killed by the storm.

In an exchange with Amazon’s CEO of Worldwide Operations on twitter, another worker from Kentucky explained that despite a tornado hitting two miles from his home, management at his warehouse would not give him solicited leave.

Clearly, even impending natural disasters are not deemed a worthy excuse to interrupt Amazon’s flow of profits.

Similar stories of dangerous working conditions are now being told by workers from the Mayfield Consumer Products factory in Kentucky. Multiple survivors of the disaster there have said that they asked their managers for leave to go home and take shelter long before the tornado hit. If their pleas had been acknowledged, this would have given the workers several hours to get to safety. Instead, people were made to huddle in bathrooms and hallways — conditions entirely inadequate given the severity of the storm that bosses knew was incoming.

Aside from being given little or no protection in the factory, those workers who asked to leave faced threats of redundancy from management. McKayla Emery, who worked at the factory, reported that those asking for permission to shelter at home were told: “If you leave, you’re more than likely to be fired.” Another worker said, “The situation was bad. Everyone was uncomfortable,” and that their boss told them: “You can’t leave. You can’t leave. You have to stay here.”

Mark Saxton, who operated a forklift in the Mayfield Consumer Products factory, described the confusing and careless policy of management:

“We should have been able to leave… The first warning came, and they just had us go in the hallway. After the warning, they had us go back to work. They never offered us to go home.”

Elijah Johnson, a 20 year-old factory worker, said, “I asked to leave and they told me I’d be fired”. After asking whether he would still be fired if he left in order to protect himself from the incoming tornado, Johnson reports that he was simply told, “Yes.”

Surviving workers have even described how management took a roll call in the middle of the storm, in order to find out if anyone had left the factory, the implication being that those not present would be fired.

Predictably, spokespersons for Mayfield Consumer Products have denied all wrongdoing on the part of the company. One spokesman described the above accounts of threats against workers as “absolutely untrue”, saying that workers “can leave any time they want to leave and they can come back the next day.”

In other words, the company is claiming that not only are all the surviving factory workers simultaneously telling the same lie about being prevented from going home, but that they came up with the same fake story about how those who left were told they would be fired!

Coercing workers to remain on site despite knowing that doing so poses a direct threat to those workers’ lives, makes these bosses guilty of murder. That even now, the company tries to throw blame onto the dead workers themselves only shows how utterly cold-blooded this act of murder was.

As repellent as the response of the company management was, it should come as little surprise. The factory was the third-largest employer in the region and maintained its profits by keeping working conditions extremely poor. Wages started from $8 an hour, with many jobs requiring 10-12 hour shifts. Mandatory overtime was commonplace. Prison labour was also typical, a number of inmates from the local Graves County jail were present on the day of the tornado — none of them were allowed to leave.

A flight from Chicago to Huntsville at 35,000 feet captured these photos of the storm that produced the Large Violent Deadly Tornado on Dec 10, 2021. At the time of these photos, the storm was between Mayfield & Madisonville, Kentucky!

In the run-up to Christmas, the time when demand for the candles that the factory produced peaked, the company was clearly not going to allow any, even temporary, stoppage. Doing so would have impacted its profits. Senator James Comer, who represents the area, described the factory as having been “going 24/7” in the recent period.

With workers being treated as mere cogs in a machine at the best of times, when disaster struck, the bosses only sought to squeeze as much productivity out of them as possible. For the capitalist class, workers are replaceable. If a worker is killed, it is none of their concern — they can be replaced.

There has been a mass outpouring of solidarity from the working class across Kentucky and beyond in response to the cruelty to which these workers were subject. One resident summed up the mood of anger: “There is no reason for us to lose family members, because corporate America wants a dollar”.

Following on from ‘Striketober’ and a wave of strikes including companies John Deere, Kelloggs, Nabisco, Kaiser Permanente and elsewhere, hundreds of thousands of workers across the country are realising their strength and waging the class struggle at a higher level. Workers were used as cannon fodder for the bosses as the pandemic raged. Untold numbers have been sacrificed for the profit hunger of the bosses. Now workers are being made to pay for the economic fallout of the crisis in the form of the erosion of their wages by inflation and they are refusing to take it lying down. Workers are fighting back.

These events will only further expose the callous cruelty at the heart of the capitalist system. Ultimately, these tornadoes were not a mere ‘natural disaster’. Every death was allowed to happen by the short-sightedness of the bosses and their mad hunger for profits. Only by overturning capitalism in its entirety and handing control of the economy to the working class can we put an end to the senseless devastation of the current system.