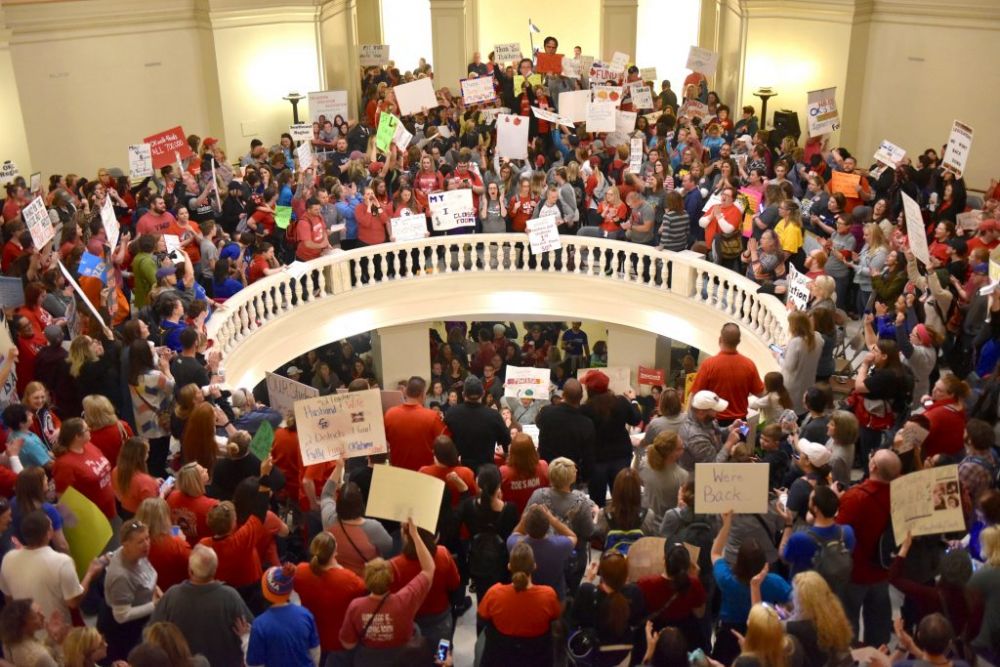 Teachers are on the move around the United States. By shutting down schools in every county in the state of West Virginia—even defying anti-strike laws that prohibit public sector employees from taking such action—teachers and other education workers have provided an exemplary lesson in class struggle for the labour movement to follow. Their inspiring victory has now set off similar actions in Kentucky, Oklahoma, Arizona and other parts of the country.

This is a welcome morale boost for a labour movement that has faced decades of decline—but the class war is far from won. Capitalist politicians are already seeking to reverse the West Virginia victory, by assigning a “state task force” to review teachers’ health benefits, and threatening to cut Medicaid and other social programs to divide the population against the teachers. Until the working class takes political and economic power from the hands of the employer class, we can expect counterattacks and further efforts to pit one section of the workers against another.

Nothing inspires confidence like success! After years of vicious austerity against teachers and public sector workers, the pressure was building for a response to the big business politicians. The leadership of the two large national unions—the Nation Education Association (NEA) and the American Federation of Teachers (AFT)—failed to develop either a national or local response to these attacks. But nature abhors a vacuum, and the rank and file in West Virginia organized itself in the schools, using both social media and personal contact to build broad-based support.

They correctly worked to unite, not only the teachers but other school workers such as cafeteria workers, crossing guards, and bus drivers, and linking arms with all state employees. They were also not afraid to fight—even though the state does not give them the right to strike. They knew that if they did not show their power, the politicians would force more austerity on them. 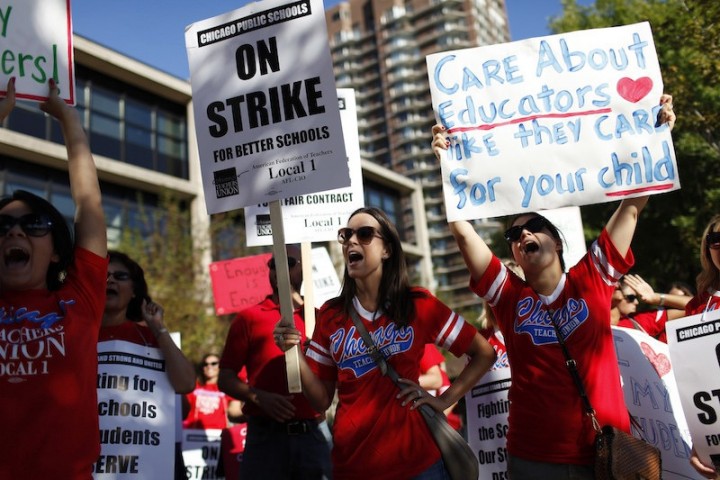 The victories of the West Virginia teachers have inspired others around the country / Image: TMT photos

The West Virginia Republican state government soon found out that schools cannot be run without teachers and other education workers. Most of the students and parents were also supportive of the teachers. This led the state government to offer a bigger raise—but not the 5 percent that was demanded. The union leaders, who had not led this strike at all, tried to get everybody back to work on the basis of this offer, but the teachers refused to do so until they got legislation passed that gave them and other state workers the full 5 percent increase! The bosses’ politicians eventually gave in and grudgingly conceded the raise.

This victory inspired a one-day strike of teachers in Jersey City, NJ at the end of March. In Kentucky, teachers also started protesting their governor’s plan to replace their pension with a 401k-style plan, which he calls “pension reform.” This set off a movement of “sick outs” and demonstrations of thousands at the state capital.

In Oklahoma, where the average teacher salary is $45,000, teachers have demanded a $10,000 raise, plus $5,000 for other education workers and more funding for education. In response, on Monday, April 2, about 200 of Oklahoma’s 500 school districts were closed as teachers walked out and held protests at the state capital. After a nine-day walk out, the teachers won a raise of up to $6,000 a year, based on years of service, with other school workers getting a raise of $1,250. The teachers union leadership decided to call off the strike and focus them on the November election, which really means voting Democrat. Although some union members are disappointed, the rank and file does not seem as organized as the West Virginia Teachers were, when their leadership tried something similar. In Arizona, the teachers are just beginning to organize to fight back. They also want raises and for the state government to reverse the austerity that has been imposed on education in the recent period.

Learn the lessons of history

The combativeness of the teachers is tapping into the great traditions of the American labour movement. There are many lessons for us today, and these were paid for with the blood, sweat, and tears of many people. Unions were built by breaking laws made by the bosses to keep the workers in the dirt. Labour won battles through the mass mobilization of the workforce at the workplace, and by building working-class solidarity, not by sending lobbyists to Congress. Since the interests of the workers and the employers are diametrically opposed, unions were built in opposition to the bosses—not in “partnership” with them.

Past militant trade union struggles were led by socialists and communists such as Eugene Debs, Elizabeth Gurley Flynn, Farrell Dobbs, Carl Skoglund and many others. It was these kinds of leaders who built the Teamsters into a powerhouse union. It was the communists who organized textile workers in the South. It was the Left that built the CIO. 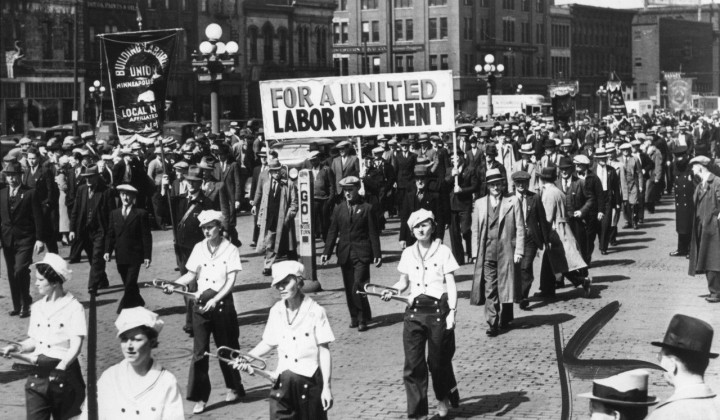 Past successes in the labour movement were built through militant, class-independent struggle under socialist or communist leadership / Image: public domain

Militant organizing led to a tripling of union membership from 1933 to 1940 and brought real gains to the working class. However, these struggles did not lead to the building of a mass political party of the working class and the bosses were left in power to run society. We cannot let this continue.

The protracted upswing of capitalism following WWII allowed unions built during the Great Depression to gain concessions through bargaining. It was in this environment of class-collabouration that the McCarthyite Red Scare drove most of the Left out of the unions. Eventually, the contradictions of capitalism intensified the class struggle, and when the ruling class went on the attack, the labour leaders, who accept this system, had no effective strategy to fight back.

Starting with the auto workers in the late 1970s, givebacks became the rule. Many times the worst concessions were made for the incoming workforce, creating multiple “tiers” of workers, further dividing and weakening the labour movement. Today, American capitalism is in terminal decline and the working class cannot defend its standard of living and working conditions without fighting for socialism.

The present leadership of the teachers’ unions—and other public sector unions—needs to be replaced with a militant fighting leadership. Our leaders must see the world from the perspective of the workers, not from that of the bosses.

What we can learn from these recent battles

Whenever public sector unions ask for more funding for education, higher wages, and improved benefits, the labour leadership feels they must explain how the government must pay for this. Frequently, they argue for higher taxes on workers, and in this way, allow the Democrats and Republicans to divide public sector workers from private sector workers. This is a big mistake!

Union leaders should argue that Republican Party government, Democratic Party government—or any combination thereof—is a government of, by, and for the rich. We are for higher wages, better benefits, more education, and public services and we are against tax increases on the workers. Our slogan is simple: Make the rich pay for the capitalist crisis!

If we had a workers’ government in place, based on socialist policies, this government would nationalize the top 500 companies and the biggest so-called “non-profit corporations.” We would take the profits, cash, and other assets—all produced by the working class—and fully fund a high-quality free education system and other needed services. 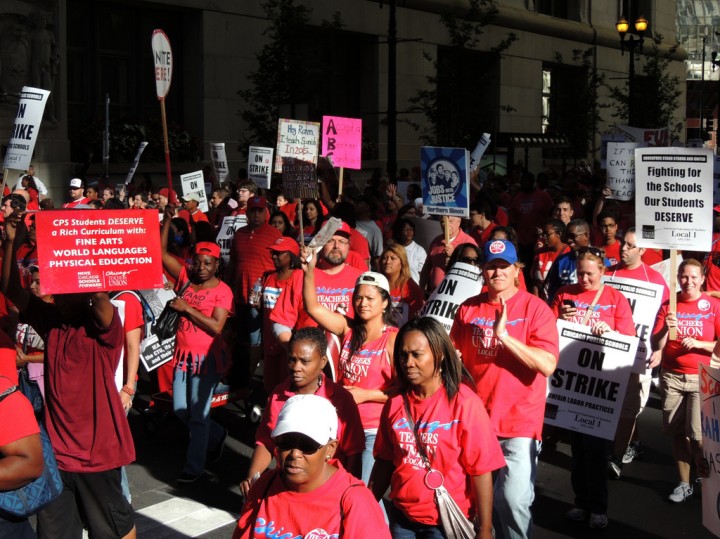 We support the struggles of teachers in all states! The more workers that join this struggle, the more we can tip the scales against the bosses / Image: Chicago Man

The West Virginia teachers won an important battle, but the war continues. We need a workers’ government and to get this, we need a mass working-class socialist party independent of the Democrats. This won’t happen overnight, but the Sanders campaign showed that millions of workers would support such a party. The labour movement must start by building the foundation and framework for this party now. This is the only way to truly fight Trump.

We are 100 percent in support of the struggles of the teachers in all states, but this battle should be spread to all 50 states, Puerto Rico, and all US territories. Teachers in Puerto Rico have tremendous experience on this front and we must combine our forces and learn from each other. The more workers that join this struggle, the more we can tip the scales against the bosses. We call on the union leaders, especially the AFT, NEA, and other public sector unions like AFSCME and SEIU, to start building for a national one-day public sector strike. We must combine a fight in the workplace with a political struggle. Fighting in only one arena allows the class enemy to counterattack on the other battlefront.

However, given the present union leadership, this is extremely unlikely. This shows the need to build a nucleus of revolutionary socialists in every workplace and union to replace the present leaders with class fighters. More big battles are to come. To turn things around and win, the workers must be armed with Marxist theory and analysis—the concentrated experience of generations of working-class fighters for a better world.