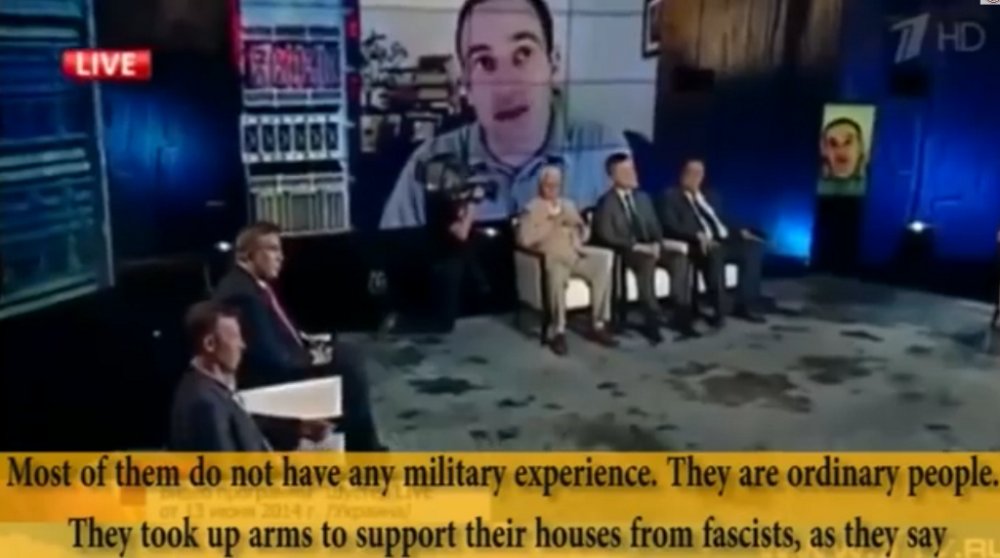 Disastrous conflicts such as civil wars are often remembered for their perpetrators in the form of leaders and generals. It is often forgotten the influence of the media in creating war hysteria. In the conflict in Ukraine, the media’s influence has played a critical role in justifying the actions of the oligarch rulers in Kiev; especially among the masses in Western and Central Ukraine.

On May 16th, the political talk show ‘Shuster Live’ invited British war correspondent Mark Franchetti to speak about his three week stay in the rebellious Donbas region. Among the guests on this talk show were famous Ukrainian personalities such as singer Ruslana, presidential candidate Olha Bohomolets, former Georgian President Mikhail Sakashvilli, with representatives from the ruling Batkivshyna party, the Ukrainian interior ministry and the “National Guard” battalions that were sent to fight in Donbas by the Kiev government.

Franchitti began to recount – from his time with the ‘Vostok’ battalion – that the rebels in Donbas were in fact, mostly composed of people from or close to the region, and most did not have serious military training – many of them coming from working-class backgrounds. He added that the people do not feel represented by the Kiev government, and genuinely feel that they are fighting fascism. And although many were hoping that Russia would aid them, Moscow is not ready to give this aid.

The response of almost all of the invited guests was dismissive, with some laughing the accusations off and the representative of the interior ministry saying that what the journalist had seen was a Kremlin-orchestrated “Potemkin village”. The National Guard members accused the journalist of lying, which he denied. This event, while seemingly isolated, is just one of a number of ways in which the position of the Kiev government is beginning to unravel.'

Who controls the media and what does it serve?

With the fall of the USSR, the Ukrainian media was privatized by the oligarchs just as with the industry. While the industry experienced a strong decline, the oligarchs recognized the potential of private television channels and newspapers in controlling public opinion. Journalists exposing the oligarch corruption were threatened, fired or, as with Gregory Gongadze, murdered if their reporting was deemed to have gone too far for the ruling class.

Since the flight of Viktor Yanukovich at the beginning of the year, the Ukrainian media has been used to consolidate the position of the oligarchs that replaced him. For several months, the Ukrainian media has been portraying the Donbas region as a Russian invasion of Ukraine. The media’s claim was that the rebellion in the East was in fact, an invasion of Russian forces and separatist groups and that these forces were wreaking havoc in the region and kidnapping people. They had also claimed that the rebel forces had significant military experience, and that the local population waiting for Ukrainian forces to save it from this menace.

While this has been reported to be mostly false by a number media sources, especially the Russian ones, but also some western media, the dominant narrative has been the Kiev one. This is the case even in western media, because western capitalism has an interest in the new regime consolidating itself and further opening the Ukrainian market up for profits. It is for this reason that Mr Franchetti’s appearance – as a reporter for the Sunday Times, who has criticised the Putin government for having covered Chechnya for several years – was difficult to dismiss as merely a ‘Kremlin-propagandist’.

The Russian media, although highly critical of the Ukrainian government, has played exactly the same role as the Ukrainian media in legitimizing the rule of the Russian oligarchy. Their interests lie in legitimizing Russian imperialism, and as such, they can only be relied on in a certain context. The actions of the breakaway republics in the East can only be supported by the Russian government to the extent that they do not provide an example for the Russian workers against the Putin regime. Despite the prevalence of nationalist leaders in these republics, the large participation of the working class has given them a certain revolutionary and anti-oligarch character. It is becoming clearer with each passing day that the Putin government has no interest in supporting this kind of movement.

It is not only in the East that the Kiev government is facing resistance. The Ukrainian government has shown itself to be incapable of resolving the rebellion just as it has not been able to develop the Ukrainian economy. The shooting down of a Ukrainian plane with 49 soldiers and crew onboard only serves to reinforce the perception of their incompetence. Many sections of the Ukrainian army have been protesting – along with their families – at the poor conditions of the soldiers, who are underfed and under-equipped. This has forced Kiev to rely more on air strikes, artillery strikes and fascist National Guard battalions.

The largest threat to western and Russian imperialism is the uniting of the Ukrainian working class against the oligarchy. Any moves towards this will certainly be downplayed and resisted by both sides. Although there is no unity at the moment, as history has shown the fatigue of the soldiers in the Ukrainian army is will turn them against the war, and eventually against the people who sent them. The prospective nationalizations of oligarch-owned industries in the Donbas and Lugansk could provide an example not only for the rest of Ukraine, but also for the Russian working class and the working classes in the west. The way for peace in Ukraine is not through negotiations amongst the bourgeois powers, but the uniting of the working class in the common struggle for socialism!