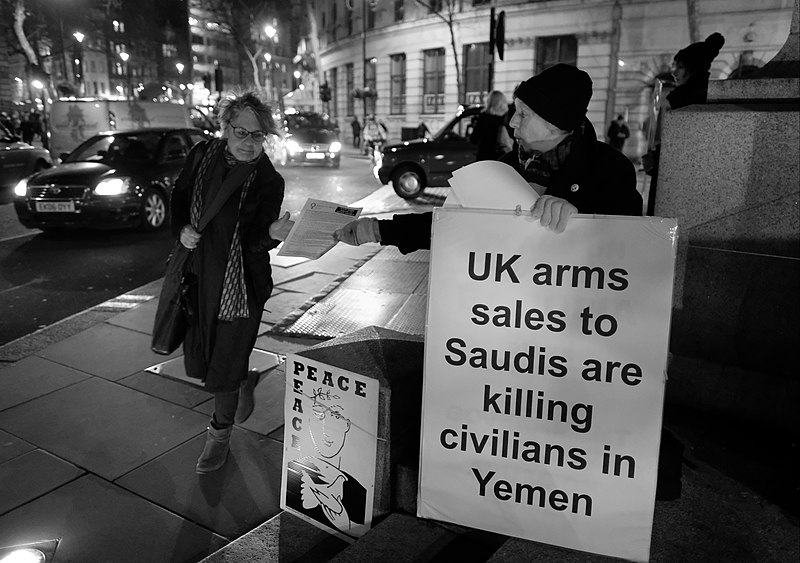 The Tories claim they are spending all their time and energy ‘dealing’ with the pandemic. However, much like Health Secretary Matt Hancock’s forced tears on the television, this is a smokescreen for what is going on behind the scenes.

A legal battle last year resulted in the British government ‘banning’ all new arms sales to Saudi Arabia, and other coalition forces involved in the bloody war on Yemen. The grounds for the restrictions were breaches of international humanitarian law.

This is surely justified, given the damage that has been caused by the Saudi-coalition forces. Airstrikes have been responsible for two-thirds of civilian deaths (treated as an unfortunate ‘collateral damage’ from the point of view of the imperialists), totalling roughly 8,000. On top of this, the deliberate targeting of important infrastructure has left millions of people in hunger and starvation. British imperialism has been a key facilitator of these attacks and therefore complicit in all of these crimes.

But on 7 July this year, the ‘ban’ on arms sales was lifted, with the British state finding no ‘pattern’ of air strikes breaching international law.

In reality, the ban was no such thing, because it quickly ran up against the drive to keep the money tap flowing, with unlawful new licensing only revoked under pressure. Pre-existing licenses continued to operate. As BAE systems, the largest exporter to the gangsters in Riyadh, confirmed in a 2019 report, business continued as usual. Support service contracts were fulfilled, enabling fighter jets to be maintained.

Whilst Liz Truss, the International Trade Secretary, cried a river of crocodile tears, lakes of blood continued to be spilled in Yemen. This undoubtedly could not have happened without the instrumental role Britain played, and continues to play.

Truss gave her “unreserved apology”, whilst admitting that further breaches will possibly “come to light”. Meanwhile, the UK government continued to invite Saudi Arabia to the world’s largest arms fair; a stark signal that they were not anticipating this ban to be indefinite or final.

Though this ‘landmark’ court case did not really change anything, the official reasons for the ban being overturned this summer are as ridiculous as they are transparent. Truss concluded that there was no “pattern” to be found in violations. And yet, in that very month, the Ministry of Defence publicly stated that they had recorded more than 500 potential violations of humanitarian law in Yemen. And here we are of course speaking of formal bourgeois international law, which by default favours imperialism.

The Saudi-led coalition has carried out more than 20,000 airstrikes since the beginning of the conflict in 2015. According to the Yemen Data Project, one-third of these airstrikes – by aircraft made and maintained by BAE systems – have been on non-military sites. This had led to the mass displacement of millions of people. The suggestion that there are only 500 ‘potential’ (!) violations is a woeful underestimate.

Nevertheless, it has been pointed out that even these sugar-coated statistics reflect a pattern. It is clear that the increasingly dire reality for millions of Yemenis is one of unimaginable strife, hunger and poverty. But this is of little concern to the Tories and their cronies. Human rights are small change compared to war profiteering.

The Tories have been lying through their teeth about the role Britain has played in this conflict. While they may look stern and serious on television when speaking of this ongoing humanitarian crisis, they are jubilant when it comes to arms fairs, and ensuring Britain continues to have a sizable slice of the pie.

Truss’ claim that there is “not a clear risk” of British weapons being used for war crimes is a blatant fiction. The sale of arms, the maintenance of Torpedo and Typhoon jets, the sharing of intelligence and operational and technical shadowing has left just under half of Yemen’s pre-war healthcare facilities destroyed or defunct. Hospitals are one of the many key infrastructures turned to rubble. Now the courts have given their rubber stamp of approval for this to continue. Capitalism is, as Lenin said, horror without end.

Though further challenges have been made for an embargo on arms sales to Saudi Arabia, what is clear from this entire episode is the Tories have no intention of stopping the war machine. Neither ‘moral’ nor legal appeals will sway these gangsters from this path, because the drive for profits reigns supreme.

Toxic ties with House of Saud

More liberal commentators have expressed disquiet at Britain’s ever-closer relations with Saudi Arabia. But we must be clear: these ladies and gentlemen are not objecting to the crimes of British imperialism per se. They are simply embarrassed by the ‘toxic’ ties with the despotic House of Saud. The dire and desperate situation the majority of Yemen endure is a very distant concern. 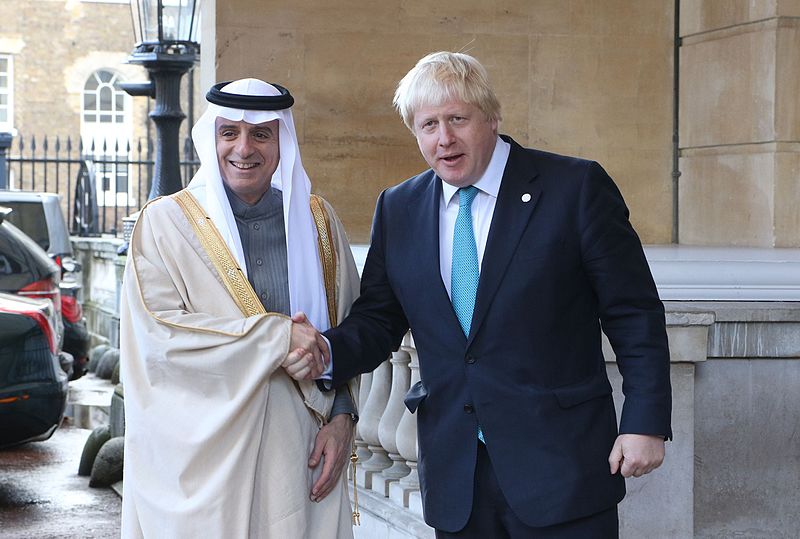 Britain's fully complicit in the crimes of the despotic Saudi regime / Image: Foreign and Commonwealth Office

A very important element of this relationship is that Saudi Arabia is the biggest defence importer in the world. In the past decade, it has imported an eye-watering $116bn worth of arms – twice as much as any other country. Of Britain’s $125bn defence exports since 2010, 60% of these sales have been to countries in the Middle East. These sales rely on the continued destabilisation and destruction of this war-ridden region – with absolutely no consideration for the human cost.

The British military operates in scores of locations across the Middle East. Declassified reports show there are 23 military bases in the region; with personnel making use of 41 on top of this. 15 key sites are to be found in Saudi Arabia, including the Air Operations Centre – where the RAF undoubtedly assist and aid their Saudi counterparts in the airstrikes. It was recently exposed that, during the so-called ban on arms sales, British troops were covertly stationed and continue to be stationed in Saudi Arabian oil fields. There are also many RAF staff, that while on secondment to BAE systems, serve at the Saudi’s air bases close to the Yemen border.

The idea that the destruction in Yemen is exclusively a Saudi problem is a mirage. With the Tories’ plans to increase military spending by $22bn over four years – an increase of 10 percent – Britain will continue to aid and abet atrocities throughout the Middle East. The cuts to foreign aid – though ultimately of course part of the ‘soft’ power imperialists wield – are preparing a perfect storm for the countries most in need in the region.

What is the Labour Party’s response to this? For all the gushing praise Sir Keir Starmer receives in the bourgeois press for his ‘forensic’ leadership, he appears to have let this one slip under the radar.

But this should come as no surprise: his approach to foreign policy is an extension of his general approach to politics and intentions for the Labour party: proving himself to be a safe pair of hands for the capitalists and suppressing the left in the party.

Sir Keir has been banging the drum of ‘patriotism’ and ‘national security’. This is why he whipped Labour MPs to abstain on the Overseas Operations Bill, which seeks to let the British military get away with war crimes. This is also why he welcomed increased military spending, only criticising its announcement “without a strategy”.

Typical of right-wing reformists, he is grabbing onto the tailcoats of the Tories. Starmer is positioning himself as the leader of a 'credible' opposition – which is to say, no opposition at all when it comes to the plight of the poor in Yemen, Britain or anywhere else.

As Lenin said, war is terrible – terribly profitable for the capitalists. Marxists must fight against the Tories’ war profiteering and imperialist ambitions and the flag-waving capitulation of Starmer, for genuine anti-imperialism in the Labour party and movement at large. Ultimately, can only be achieved by breaking entirely with capitalism and imperialism, which is a natural part of capitalism, and fighting for a society based on human need and welfare, not warfare.