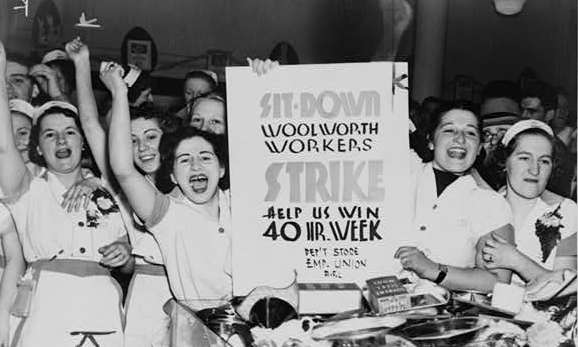 Originally called International Working Women’s Day, it was proposed by Clara Zetkin of the International Women’s Conference that was linked to the Socialist Second International in 1910. With 100 female delegates from 17 countries at the conference, IWWD was organized as a socialist event to promote equal rights, including suffrage for women, against sex discrimination in employment, and to link the struggle for women’s emancipation with the need to overthrow capitalism. For the first time on 19 March 1911, over 100 million people in Austria, Denmark, Germany and Switzerland rallied for IWWD. In Vienna, women carried banners to honour the Paris Commune of 1871 which was the first time the workers ever took power. In particular, the working women of the Paris Commune played an incredible and heroic role in this struggle by demanding the right to vote, the separation of the church from the state, the right to divorce, education, and even the right to bear arms to defend their struggle.

In 1917, IWD marked the beginning of the Russian Revolution. The demonstrations by women workers in Petrograd demanded the end of World War I, an end to food shortages, and an end to the Tsarist regime. Initially, it was the textile workers who left their work in several factories and sent delegates to ask for support of their strikes. This led to a mass strike and the February Revolution (this occurred on March 8 of the current Gregorian calendar). After the Bolsheviks took power in 1917, there was a tremendous advancement in the rights of women. The Bolsheviks had always had a serious approach to the question of women and their emancipation. There were even special committees dedicated to organizing working women and many of whom played leading roles within the Bolsheviks. Through the socialist revolution, here is a snapshot of the achievements the Bolsheviks instituted: the right for women to vote, the right to divorce, decriminalized prostitution, decriminalized homosexuality, legalized abortion, and the development of social programs for mothers and children. It was only with the Stalinist degeneration of the Russian Revolution where many of these gains for women were retracted as part of a larger repression of the revolution by the bureaucratic caste against the genuine democratic workers’ state.

The struggle for women’s emancipation is intrinsically linked with the struggle against capitalism. It has taken a concerted effort to de-politicize and repress the socialist origins of IWD. In the 1960s, many of the formerly Stalinist countries, such as the Soviet Union and China, declared IWD to be a national holiday. Women were given the day off from work. In the Western world, the suffrage movement for women’s political rights led to divisions within the movement and eventually split on class lines. Many liberal and bourgeois women began to recognize IWD as an opportunity to celebrate the achievements of woman with a particular focus on the upward mobility of women as CEOs and members of corporate boards. The socialist history of IWD represents working women who understood that the oppression of all women was rooted in class societies. Therefore, in order to truly emancipate women, it was necessary to create a democratic socialist society that would abolish class systems. Equality for women is not represented when only a few get to climb up the corporate ladder while the majority of women are left out. This is highlighted in the United Nations statement that women provide 2/3rds of the world’s working hours and produce 50% of all food, yet only earn 10% of the world’s income and own 1% of all property. To further make this point, 70% of the world’s poor are women and girls. In 2014, the UN’s theme for IWD is “Equality for Women is Progress for All”, which begs the question of how plausible this is under capitalism.

In Canada, the struggle for the emancipation of women still continues today. Despite the gains for women’s rights such as the right to vote, increased numbers of women in education and employment, legalized abortion, and the creation of programs to help address sexual and domestic violence, the crisis of capitalism has begun its attacks on hard-fought social programs and good jobs that help women and workers have a decent standard of living. The austerity measures implemented by all levels of government have only exacerbated the existing inequality, poverty, and oppression that women and youth already face under capitalist society. In Canada, austerity has resulted in wage freezes and cuts that do not keep up with the high cost of living. Over 60% of new jobs created are minimum-wage jobs, and in Ontario, there are over 156,000 households on wait-lists for affordable housing. Increasing tuition fees have led to Canadian students carrying an average of $27,000 in student debt by the time they graduate. Childcare fees, on average across the country, average out to $850-per-month, and so forth. In 2006, the Conservatives attacked the government’s Status of Women department, eliminating $5-million of its funding that led to the closing of 12 out of 16 regional offices and prevented the federal organization from funding women’s groups involved in advocacy and research that promote “gender equality and political justice”.

From Egypt to India to the First Nations movements in Canada, women and youth are playing a leading role in revolutionary movements against austerity. In many countries, IWD maintains its links to the labour movement with the presence of unions, labour party members, and community groups. The socialist origins of IWD are an important reminder that militant action, combined with a socialist program, is needed to advance the lives of women and all workers.