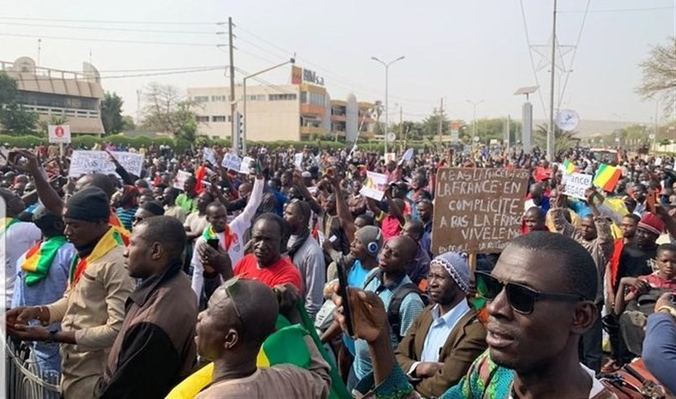 The turmoil in the West African country of Mali deepened this week after a group of soldiers and junior officers based in the capital Bamako detained President Ibrahim Boubacar Keita, Prime Minister Boubou Cissé and other top government officials and forced them to resign.

This followed weeks of mass protests and demonstrations against the government of Keita. Tens of thousands of protesters took to the streets to celebrate after the news of Keita’s arrest was made public. There were wild scenes of jubilation in Bamako, with protesters and soldiers firing live ammunition in the air to celebrate the removal of the hated French-backed government. Then, around midnight, Keita appeared on television to announce his resignation and the dissolution of parliament.

In March, the government pushed ahead with parliamentary elections despite the dangers posed by the COVID-19 pandemic. In a fraudulent way, Keita’s party ultimately won an additional 10 seats. At the same time, the main opposition leader, Soumaila Cissé, was kidnapped by unknown gunmen. He has not been seen since.

Mass protests followed, which forced the country’s Constitutional Court to overturn the election results. But this decision failed to pacify the mass movement. Instead, it further emboldened the demonstrators to push for the complete removal of the government. All of this anger boiled over in June, when hundreds of thousands of protesters took to the streets of Bamako to protest against the collapse of the economy, the government’s mishandling of the COVID-19 pandemic and the worsening crisis in the country’s northern and central regions, where a serious Islamist insurgency has totally destabilised the entire Sahel region.

Initially, Keita refused to step down. Then his entire cabinet resigned amid an intensification of the civil war that has been raging since 2012. He then formed a new cabinet in late July in an attempt to get out of the crisis. But this just showed how weak his base of support became.

The regime then tried to channel the movement into an opposition coalition known as the 5 June Movement (M5-RFP), led by the cleric Mahmoud Dicko. The aim was to save the regime as a whole from being overthrown. But this coalition of the ‘loyal’ opposition leaders failed to pacify the movement. Every little demand they put on Keita spurred on the masses, in turn forcing them to put forward additional demands. This was a very dangerous situation for the regime.

Now that it became clear that the rotten Keita government is unable to grant any concessions, the last line of defence, the armed bodies of men, have stepped in to save the regime from being overthrown.

The chaos caused by NATO’s intervention

This is the second coup in Mali in eight years. A mutiny occurred at the same army base in 2012, when former President Amadou Toumani was overthrown after a disastrous response to the insurgency by Tuareg rebels in the north of the country. This insurgency was armed with weapons flowing from nearby Libya following NATO’s intervention to remove Gaddafi in 2011.

The Nato-led intervention in Libya was aimed at cutting across the Arab revolutions. This completely destabilised the situation and threw it into chaos, with Islamic militias overuning the country committing wide scale atrocities including kidnappings, massacres, bombings, human trafficing, and starting a flourishing slave trade. This was the price Libya paid for its western backed ‘liberation’.

This chaos spilled over into West Africa and the Sahel region, destabilising Niger, Burkina Faso and Mali particularly. In Mali, fighters from the Tuareg people who fought as mercenaries for Gaddafi went back to Mali, fueling a full-scale rebellion in the north of the country. The influx of heavy weapons into the region also fueled the Boko Haram insurgency in Nigeria, Cameroon and Niger.

Keita came to power in 2013. A deal was signed in 2015 with some rebel groups, granting the sparsely populated north greater autonomy. These include Islamist extremist groups linked to al-Qaeda and the Islamic State who used the longrunning Tuareg insurgency to launch their own attacks. Keita held onto power in 2018 in a fraudulent election but his concessions did not stop the insurgency. The situation worsened for ordinary people and created deep resentment in the army.

Having destabilised Libya, the imperialist forces then followed the jihadist groups into the Sahel by deploying more than 20,000 international and local troops to the region. This included 4,500 French soldiers, 13,000 UN troops, and about 5,000 troops connected to the French-financed ‘G5 Sahel’ governments which included Burkina Faso, Chad, Mali, Mauritania, and Niger. This “war on terror” only succeeded in further destabilising the Sahel. Operating in the region through its affiliate, the Islamic State in the Greater Sahara (ISGS), accelerated its operations in Mali, Burkina Faso, and now in Niger.

The response from the so-called international community is hypocritical in the extreme. Moussa Faki Mahamat, the African Union commission chairman, said that he condemned “any attempt at anti-constitutional change” and called on the mutineers “to stop all recourse to violence.”

The AU’s African Charter on “Democracy, Elections and Governance” prohibits any amendment or revision of the constitution that constitute “an infringement on the principles of democratic change of government.” But the AU never invoked this provision and kept quiet after waves of “unconstitutional” power grabs across the African continent recently. In Guinea, president Alpha Conde was supposed to leave this year but orchestrated a constitutional coup which would allow him to stay on for a fourth term. The same happened in Egypt, Uganda, the Comoros, the Republic of Congo, Cameroon, Chad, Djibouti, Côte d'ivoire, Rwanda and Togo.

Then there's the imperialist powers, who also condemned the coup. But they are directly responsible for this crisis. Protesters in Bamako have rightfully protested the presence foreign forces calling for French forces to leave the country which are closely tied to corrupt local leaders.

The Sahel is among the poorest regions in the world. The great mineral riches of the region have not benefited the people who live there. Now the foreign military presence and the jihadist groups are further adding to the long suffering of the local people. But the protests in Mali clearly shows that the masses are tired of the situation. The same is true in Burkina Faso where protesters have demanded that the state provided arms to them to fight the armed groups themselves.

The difference between this coup and the one of 2012 is the role of the mass movement in the process. The army is intervening to cut across the brewing revolutionary anger in society. In Burkina Faso we have seen a full-scale revolutionary situation developed in 2014, with the overthrow of Blaise Compaoré. They also overthrew a counter-revolutionary coup later on. This shows the revolutionary potential of the working masses. For the Malian masses to succeed they must have no illusions in the military officers or the clerical opposition of Mahmoud Dicko. Only by relying on their own strength and linking up with the masses in Burkina Faso and Niger can they succeed in removing their rotten regimes, the terrorist groups and the imperialist powers from the region.