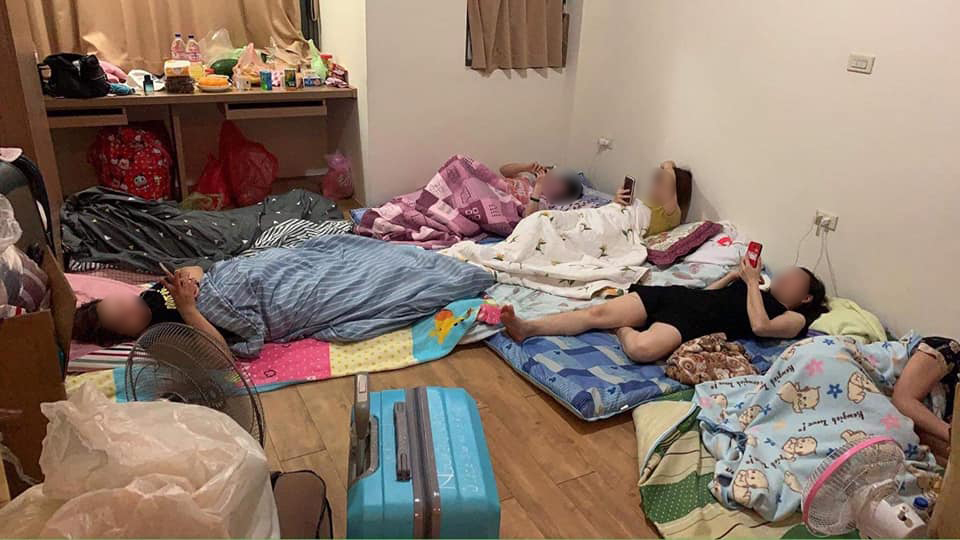 Amidst a global microchip shortage, the Taiwanese chipmakers are doing everything in their power to keep up production and meet demand, despite a new outbreak of COVID-19 cases on the island. To make the maximum profit out of this surge in sales, they are plunging their workforces – which largely consist of migrants from Southeast Asia – into utterly inhumane conditions.

Only last year, Taiwan was being lavished with international praise for its handling of the pandemic. The governing Democratic Progressive Party (DPP) was dizzy with success. Health Minister Chen Shih-chung was thrust into political stardom for leading the epidemic control efforts, even boasting this February that “the world cannot catch up with Taiwan.”

Since mid-May however, multiple clusters of infection have begun spreading domestically, particularly in the North of the country, but also in the southern county of Pingtung where a Delta variant cluster has been discovered. Major cities have imposed restrictions on public and outdoor activities.

Yet, as in the rest of the world, ending the pandemic has taken a backseat to keeping the bosses’ profits flowing. This is particularly starkly demonstrated in the key microchip industry, where workers’ lives have been carelessly placed at risk to keep production running at full capacity.

Within Taiwan’s microchip manufacturing plants, which account for over 50 percent of all semiconductors manufactured worldwide, workers have been asked to continue to work despite multiple COVID-19 clusters being reported. Rather than shutting down production or providing the necessary care, the workers have been subjected to insane rules to keep them producing while keeping the cases down.

An investigation carried out by British journalist Nicola Smith for the Telegraph, showed that workers in chip factories are “‘imprisoned’ in dormitories” and banned from even brushing their teeth.

Workers have been told that, under lockdown measures, they may not leave the company’s premises. Should they fail to comply, their bosses have made the vilest threats. One broker threatened its workers:

“If you die [of COVID], your body will be cremated in Taiwan immediately, your family will not even be able to see your body, and your family’s finances will be immediately disconnected… If you do not die, you will be responsible for all the isolation fees during isolation, medical treatment, and other people who have been in contact with you.”

Taipei-based Cameo Communications issued a similar edict to its workers, threatening its employees that it would hold them personally responsible for damages suffered by the company should a worker be infected, including damages to its business image.

These lines show just what the capitalists think of the workers. They regard them as mere cannon fodder for their profit-making machine.

A vast majority of the workers in question are migrants from countries such as the Philippines, Thailand, Vietnam, and Indonesia. These workers are often under the yoke of a labour brokerage agency, making them doubly exploited by the bosses and their brokers. They toil long hours and are often indebted to their brokers, who charge exorbitant fees. In addition, the migrant workers suffer under the long-running racist policies of the Taiwanese state. All this goes on just in ‘normal’ times.

Since the outbreak of the pandemic, the racist policies of the bosses and the government have been redoubled. With an estimated 450,000 migrant workers packed densely into factories and dormitories, they are also significantly more susceptible to infection. Prior to the pandemic, the capitalists and landlords ‘economise’ on the amount of space a worker is permitted in order to work and live. They are crammed into factories and dormitories without regard for their comfort. By treating workers in a way that is little better than cattle, the bosses have created ideal conditions for the spread of COVID-19. In the industrial county of Miaoli, 85 percent of the clusters of infection consist of migrant workers, while just 15 percent were Taiwanese. 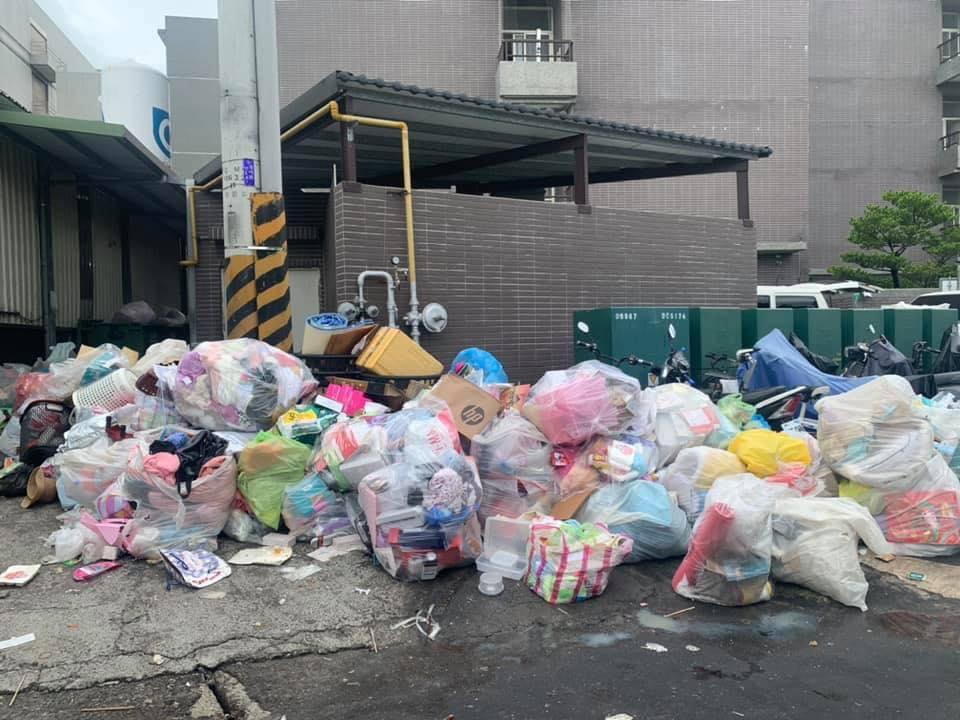 Bags of possessions belonging to workers infected with COVID-19 that have been tossed out onto the streets without the workers' permission, at King Yuan factory in Miaoli. Whilst the workers are thrown out, their agencies continue to charge rent for dormitories they are no longer allowed to sleep in / Image: tsengwenhsueh, Facebook

In response to this, Miaoli’s KMT Magistrate Hsu Yao-chang ordered sweeping restrictions preventing migrant workers from leaving dorms unattended. Those who rented apartments outside of the factory dorms were forced to return to the crowded dormitories. An Indonesian worker under the name of Emma told a journalist, “I feel like I am a prisoner.”

Those unlucky enough to become infected have an even worse fate in store for them. The personal belongings of those in quarantine have been thrown in the garbage without their consent. A quarantined worker’s bunk would immediately be given to another assignee, although the former would still be charged for the rent. Brokers and bosses have also been trying to trick the workers into signing contracts in which the latter agree to shoulder all the costs incurred during their quarantine, despite the fact that the state has been offering stipends for employers to pay these costs.

This level of racist inhumanity towards migrant workers was always present in Taiwan. The pandemic merely intensified and exposed it to the rest of the world. This is probably not the kind of “international recognition” the Taiwanese government craved.

The plight of the migrant workers in the factories is a concentrated expression of Taiwanese capitalism’s thirst for profit. Like anywhere else, profits are placed before people.

This is evident from the reaction of chipmaker King Yuan’s management to the outbreak of a cluster of infections among its employees. Upon learning of the cluster, their first response was not to suspend work, but to tighten control over the personal behavior of migrant workers, even punishing those who violated the epidemic prevention regulations by terminating their contracts. The company agreed to suspend work only under pressure from the outcry this incident provoked in society, but resumed work a few days later, exposing more workers to the risk of infection.

None of this is isolated to the electronics/chip industry. Elsewhere, employers have failed to adjust shifts appropriately (e.g. logistics workers who must endure sudden increases in workload) and have failed to provide adequate PPE (e.g., delivery workers). At bottom, all of these failures are linked to the same issue. Time and time again, we see that the employers’ concerns are not protecting their workers, but continuing to maximise profits despite the disastrous circumstances.

And what about the DPP government, which once said that “workers are the softest part of their hearts”? On 17 May, the Ministry of Labour relaxed restrictions on the working day and extended working hours in the manufacturing, distribution, and logistics industries. On 8 June, they announced that the legal minimum interval between shifts for workers in the manufacturing, wholesale, general merchandise retail, and warehousing industries would be shortened from 11 hours to 8 hours, affecting nearly 490,000 workers.

That is to say, in the face of this stubborn and highly infectious virus, the government is asking workers who have the greatest difficulty in maintaining social distance at work to toil for longer hours.

For a workers’ fightback

The same reckless disregard for human life that we have seen repeated by the ruling class and its governments all around the world in the last year, is now being repeated in Taiwan. This is not due to the “failures” or “incompetence” of this or that politician, but rather it is due to the fact that we too live in a capitalist society where the interests of capital are the top social priority.

Both of the major bourgeois parties, despite their bickering, form a united front when it comes to the treatment of the workers. As we have seen, whether it is the DPP national government or KMT local governments, the very same pro-capitalist policies are being ruthlessly carried out.

After being evicted, workers who return find their dormitories emptied and even the beds are thrown out. They are left to sleep on mats and expected to work the next day / Image: tsengwebhsueh, Facebook

This shows that absolutely no trust can be placed on either the Green or the Blue camp. The working class of Taiwan urgently needs its own political party, armed with a socialist programme.

The Taiwanese masses must actively reach out to the migrant workers, and connect their struggles. They are class brothers and sisters who suffer under the same rapacious ruling class.

In recent times, a group of Miaoli youth have been petitioning for the government to end the racist treatment of migrant workers. This is a good start, but the major trade unions of Taiwan should be even more proactive in fighting for the rights of migrant workers and incorporating the latter into their struggles.

Earlier in the month, members of The Spark – Taiwanese supporters of the IMT – published a statement analysing the situation. In our analysis, we suggested a programme for the workers’ organisations to take up the fight against the bosses' attacks. Although case numbers have begun coming down, the appalling conditions and the rapaciousness of the bosses that allowed the outbreak of the virus to begin with will not ease off. We invite readers in Taiwan to consider our analysis, to get in touch and discuss with us, and to join us in building an organisation in Taiwan that can spread these ideas, turning them into a force that can topple this profit-driven system.