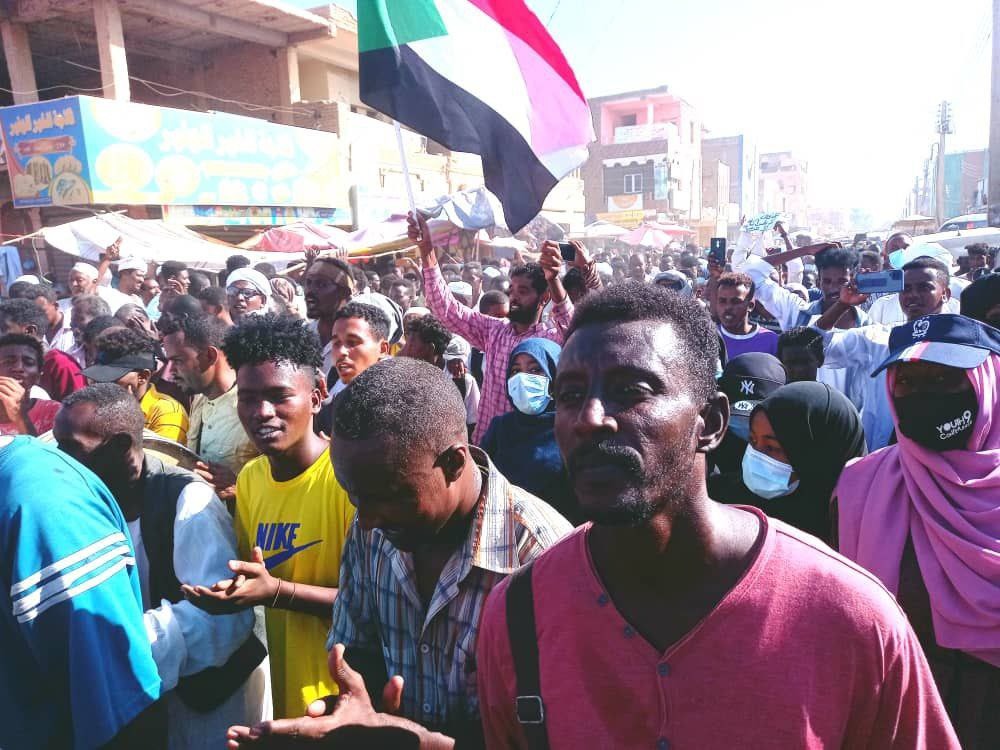 Yesterday was the bloodiest day of the Sudan coup so far. A nationwide march was met with the deadliest clampdown yet by the security forces. This massacre must be a final warning to the masses: only armed self defence by any means necessary can guarantee a victory for the Sudanese Revolution.

Last week, coup leader General Abdel Fattah al-Burhan announced a new Sovereign Council, with the top spots occupied by himself and General Hemeti – Commander of the Rapid Support Forces, commander of the Janjaweed militias responsible for the majority of the counter-revolutionary repression.

This is despite Burhan continually insisting that he has not launched a coup, but merely stepped in to “correct” the transition to democracy; that he is committed to facilitating a civilian government and would not participate in any government himself.

Burhan’s audacious manoeuvres enraged the masses, who made their stance clear in a planned national demonstration on the weekend: NO negotiations with the coup-plotters, NO power-sharing arrangements, NO compromise with the generals, but full transition to a civilian government!

This second ‘March of Millions’ was broken up by violent suppression, with several people killed as the crowds were forced back by live ammunition and tear gas.

In response to this outrage, and the junta’s refusal to restore internet coverage, despite a court ruling from the Sudanese legislature demanding they do so, the Resistance Committees and Sudan Professionals Association called for a third nationwide demonstration on 17 November.

This date is significant, as it was originally intended for the transfer of control of the previous Sovereign Council from the army to the civilian government, before Burhan launched his coup on 25 October and dissolved it.

Despite enduring almost a month of continual repression: in the form of beatings, bullets, arbitrary arrests and a near-total communications blackout, the masses via their resistance committees organised yet another massive national protest.

Figures and footage are naturally sketchy, but at least 16 towns and cities were involved, and hundreds of thousands hit the streets.

But this time, the military and police wasted no time. They cut not only internet coverage, but also phone lines, isolating the masses, and deployed troops directly to planned meeting places for the marches.

The crowds were met by an onslaught from the security forces, with most of the worst violence concentrated in Khartoum.

The twin city Bahri in the north, where the local Resistance Committee has been especially active, was singled out for particularly sadistic repression. Power was cut to the neighbourhoods, which were surrounded by troops, who fired teargas into the streets, trapping people in their homes as they hunted for stragglers.

Children are inside the home. https://t.co/d4cKRSXXmT

There are also reports that the security forces fired teargas canisters into hospitals, which were quickly overwhelmed with casualties.

At least 15 protestors were killed, bringing the total number of dead to 39. The oldest victim was 70. One was a shopkeeper in Shambat, who was not involved in the protests. The security forces went into his shop and told him to give up people hiding inside, and when he said no one was with him, they shot him.

Documenting the violations of the military coup forces in #Sudan against the unarmed peaceful demonstrators in the capital, #Khartoum.#SudanCoup#Sudan@amnesty@hrw#17novmassacre#Nov17march#مجزرة17نوفمبر pic.twitter.com/sIrEg4U5dH

Hundreds more were injured, with a significant number of the victims inundating hospitals suffering from gunshot wounds to their heads and torsos: suggesting the counter-revolutionary troops were given shoot-to-kill orders.

It is very likely that the death toll is a lot higher, as many people were left in a critical condition, and the lack of communications makes an accurate estimate impossible to come by.

In a statement that would be laughable were the circumstances less tragic, the junta (which still denies the use of violence against protestors) complained that 30 police officers had suffered from asphyxiation from tear gas!

By any means necessary!

The masses awoke this morning in a state of shock and outrage. At the time of writing, the security forces have still not ceased their repression, but are continuing to patrol and harass passersby at random in Khartoum and Bahri. They have also launched a campaign of arrests targeting prominent members of the resistance committees.

This video in high quality shows the moment of sniping one of the peaceful demonstrators from a
close distance, shoot to kill.
What kind of people are these! What is all this cruelty and hatred?#SudanCoup#Sudan#AgainstMilitaryCoup#مجزرة17نوفمبر#مليونية17نوفمير@amnesty@hrw pic.twitter.com/CqCNVD2MHE

By all accounts, these atrocities by the coup plotters are only motivating the masses further to continue their protest, and the resistance committees have carried on barricading the roads into their neighbourhoods to impede the military.

The SPA condemned the violence and asserted its position for no negotiations, compromises or partnership with the military, while many resistance committees are calling for a day of civil disobedience. Much of the country remains shut down by strike action.

The blackout makes it difficult to gauge the mood, but based on comments trickling out of social media, it seems that at least a section of the masses on the ground are becoming frustrated at repeatedly facing down an armed counter-revolution with only ‘peaceful’ methods.

As we have said many times: the only way to win victory is for the masses to organise defence committees and meet the counter-revolution with arms in hand. Ultimately, this will require fraternisation with sympathetic elements of the armed forces, but in the short-term, the masses must prepare to fight by any means they can.

As Lenin wrote about the workers and peasants organising revolutionary self-defence against the fascist Black Hundreds in the 1905 Revolution:

“They must arm themselves as best they can (rifles, revolvers, bombs, knives, knuckle-dusters, sticks, rags soaked in kerosene for starting fires, ropes or rope ladders, shovels for building barricades, pyroxylin cartridges, barbed wire, nails [against cavalry], etc., etc.). Under no circumstances should they wait for help from other sources, from above, from the outside; they must procure everything themselves.”

In some instances, the masses in Sudan have resisted the police and security forces using nothing but stones and their bare hands.

The people are outgunned, but the military is outnumbered: if they are organised and ready to fight, the masses can stop the heavily-armed counter-revolution in its tracks.

Until a section of the soldiery is won over, they must make do. What they must not do is continue the suicidal policy advocated by the SPA and the leaders of the Resistance Committees of walking defenceless into the sights of the security forces.

No negotiations! No compromise! No partnership!

The renewed call by the SPA and Resistance Committees for peaceful civil disobedience must be resisted fiercely from below. These methods are precisely what is feeding the confidence of the counter-revolution and leading to more and more bloodshed.

The leaders of the revolution must allow the masses to fight back, organise them to do so, and make a general appeal to any wavering elements of the armed forces to mutiny and join the class brothers and sisters. If the revolutionary leaders are unwilling to take these measures, they must step aside for leaders who will.

Some, particularly petty-bourgeois elements of the Sudanese expatriate community, are calling on the UN to send in a peacekeeping force to strongarm civilian rule. We must say, this is a bankrupt notion.

Look at Haiti, or Uganda, or anywhere else the UN has intervened in the name of ‘peace’ and ‘democracy’ to see how successfully these lofty ideals are upheld by the organs of imperialism.

Moreover, Volker Perthes, the UN Special Representative responsible for Sudan, has been negotiating behind the scenes with both Burhan and Hemeti for a return to a military-civilian powershare. Far from insisting on civilian rule, the UN wants to maintain these butchers in power!

What the UN, a body controlled by the imperialist nations, fears most is a revolutionary overthrow of the Sudanese junta, which could set off a domino effect of revolutions throughout the region, in countries where the masses share similar conditions as those in Sudan. Their attempts at organising a negotiated settlement only serve to throw dust in the eyes of the masses and sow illusions that somehow the interests of the revolution and counter-revolution can be reconciled.

But both the revolutionary masses and the military understand that such an arrangement is impossible. Neither can or will tolerate the other in power, in any capacity. There can be no reconciliation between the revolution and the counter-revolution: there can only be total victory for one or the other.

We quote Trotsky in his warning to the revolutionary forces in Spain, while they were locked in bitter conflict with Franco’s fascist Falange:

“Revolutions [are] the locomotives of history… Whoever lags behind falls under the wheels of the locomotive, and consequently – and this is the chief danger – the locomotive itself is also not infrequently wrecked.”

The Sudanese Revolution has shown tremendous power and resilience. Were it a matter of courage alone, the masses would have won ten times over already. And they can still win.

But revolution is a matter of practical realities. The fact is that the Sudanese masses will simply be mown down by the ruthless counter-revolution if they are not prepared to take up whatever arms are available to them and press forward.

In their counter-offensive, they can rely on no forces but their own. The crocodile tears and empty platitudes of the so-called international community and imperialist talking shops like the UN will not save Sudan from dictatorship. Only the independent class struggle of the masses can achieve this.

The masses must be prepared to resist all attempts to strike a compromise with the old Bashir regime. These counter-revolutionary creatures must be smashed, and their wealth seized by the people to rebuild the country on the basis of genuine workers’ democracy, under the authority of a worker and peasant government.

The reserves of the revolution are deep, but they are not infinite, and must not be wasted on useless pacifism. To do so would be an insult to the martyrs who have already fallen. Burhan and the generals must be treated with all the mercy they have shown to the people!

Arm the masses! Defeat the coup! Victory to the Sudanese Revolution!