A few days after the parliamentary elections on September 26, a debate began about what caused the loss of one million revolutionary votes and what lessons should be learned in order to strengthen the PSUV [United Socialist Party of Venezuela]. One of the voices that were heard was that of Eduardo Samán [Chavez’s former minister for trade], who granted an interview to Lucha de Clases, the Venezuelan section of the International Marxist Tendency.

Eduardo Samán The interview was published in many media outlets and it sparked a debate about the problems that are currently confronting the revolution. One of Samán’s proposals was the creation of a “radical current” in the heart of the PSUV, an idea that marks the beginning of a critical discussion among revolutionaries. Here, Eduardo Samán speaks once again with this revolutionary media outlet in order to go into greater depth about the idea of the radical current, and clarify some concepts and questions that have emerged in the heat of the moment.

LC: There are people out there who say that you have gone over to the ranks of the opposition. Is this true?

ES: No, not at all. That is a campaign that has been started by people who are afraid of my proposals. They say that “Samán has jumped the fence.” This is a lie. I have been a revolutionary practically all my life and I continue in this fight for socialism alongside my comrade, President Hugo Rafael Chávez Frías.

The truth is, those who spread such slander are afraid that the radical current that I am proposing will gain strength in the PSUV. They fear our political ideas, that’s all.

LC: Since our last interview with you was published, a month has gone by. What has the reaction been among the PSUV rank-and-file?

The quantity of positive commentaries was impressive. I have received a lot of phone calls, a lot of text messages, emails, messages on Twitter, Facebook, Aporrea, and so on, the great majority congratulating me for the interview and for proposing the current.

It is evident that there is burgeoning enthusiasm within the party. The creation of a radical current was in the collective imagination of many comrades but it had not come out into the public light, so to speak. Immediately, they identified with the idea, since it is an inherent necessity given the situation that the revolution is going through.

Overall, they are groups of workers, groups of students, groups of artists from the cultural sector, and groups of rank-and-file militants of the PSUV. All of them are revolutionaries, activists in this process, but they are worried about bureaucratization and they want to fight against the fifth column [a term referring to the enemy within the revolution], which they hold responsible for the obstacles we have faced.

I have also received many invitations to forums and meetings of these collectives to debate this proposal and strengthen it by adding their own contributions. I can highlight the big forum that was held in the CELARG (a state-funded foundation for Latin American studies) in Caracas and the forums in Catia [a poor neighborhood in Caracas] and Valencia [city in Carabobo state], among others.

The truth is, I am nothing more than a spokesperson or, if you like, an interlocutor, of a generalized feeling in the party. I have had contact with people all over the country who have confirmed the validity of my proposal. There are groups of PSUV members from the rank-and-file in Lara, Falcón, Táchira, Anzoátegui, Caracas, Miranda, and Aragua, among others, who have expressed their support.

Far from dividing the party, the proposal for the current is uniting the party in the sense that we can catch the militants who are so worried, or even dissatisfied, that they could descend into demoralization and abandon politics once and for all. We can avoid an erosion of the party.

LC: What is the “Radical Current?” What are its principals and objectives?

ES: We are still in the process of debating so I can’t say, but my personal vision is that the current will be a radical socialist current. I add “socialist” because it is important to show, on the one hand, that we are part of the PSUV, and on the other hand, that we have nothing to do with the Causa R [a prominent political party that was to the left of the two major parties during the 1980s and 1990s and later embraced a neo-liberal agenda].

That our current is radical does not mean that it is extremist. We are not in favor of extremism, nor fundamentalism, nothing like that. We are simply worried about the fate of the revolution and we want to impede the advance of the right wing.

Our principles are the pri 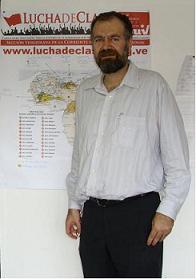 nciples of the PSUV inscribed in the program and the statutes agreed upon at the party congresses, as well as Marxist philosophy. What we have to do is defend and recover the true essence of these principles and of the Bolivarian Revolution: The fight against capitalist exploitation. The current’s real role will be to impede diversions from this objective.

We are against corruption and bureaucratization, of course, but this is not the whole problem. The problem is that there are not definitions of socialism. We must revisit the issue of socialist definitions, that is, take measures to improve the lives of the people, and take measures against the dominion of the bankers, capitalists, and swindlers.

We are not only fighting for efficiency. We are fighting for a socialist model, completely distinct from the capitalist model. We must break the chains of exploitation which subjugate tenants, workers, and peasants.

This is important to highlight, because in the past they tried to make us think that corruption was the only problem. During the Fourth Republic [the political period preceding Chavez’s presidency], they said that if corruption were to disappear, capitalism would be a perfect system. But it’s not true.

What we need are socialist definitions that aim toward solutions that go beyond capitalism. For example, when we nationalize or construct something, it should be undertaken within a socialist framework. We are not going to plant seeds for the benefit of companies like Monsanto and DuPont.

We want to change the means of production so that they serve the people, so that they are collective property in line with collective objectives. The socialist model is not about doing business to earn profit for one or more individuals, but to produce in order to satisfy the people’s basic necessities.

LC: A hotly debated issue in our country, in the context of the expropriations, is that of private property. Could you tell us your opinion regarding this?

ES: Yes, this is a vital issue for the revolution and it must be discussed in depth. The Venezuelan rightwing has come out saying that the government is against the right to property and that we are going toward communism, etc. They do this to scare people, to generate fear and uncertainty. The right screams: “Watch out! They’re going to take everything,” and small business owners think they are going to lose their business. People think they are going to lose their car, their refrigerator, their stove, etc.

However, as our friend Alan Woods explained very clearly in a recent document, this is not about expropriating small businesses or small-scale property. We are not against the right to own individual property, we are against the right to the private ownership of the large-scale means of production and distribution, which is a very different thing.

In addition, under capitalism, we have the paradox that those who work in factories are there eight, ten, or even twelve hours under increasing pressure from the owner, while we have thousands of unemployed people who are completely willing to work, but capitalism condemns them to be jobless.

Look, the truth is, it is not necessary to work so much. With modern technology, the workday could be reduced significantly. People could dedicate their time to sports, culture, and family. But the capitalists want to pressure the workers to work more in order to extract surplus value. This is exploitation and we want to put an end to it.

LC: How is this current going to be formed?

ES: Well, the idea I am proposing, and I reiterate, it is a proposal, is that there are three stages in the formation of the current. The first is what I would call “agitation,” or “the euphoria of the proposal.” This is a stage in which the proposal generates debate; where forums, meetings, assemblies, and so on are held to discuss and fine tune the proposal.

This debate is going to generate written opinions. These documents will be discussed by groups, collectives, or individuals and after that we should integrate the proposals. That is where we would enter the second phase, what I would call “forging the current’s path.” The documents gather the reflections of the PSUV members, make an assessment of what has occurred, and signal where the Bolivarian Revolution is headed. This is what is going to be the basic foundation of the current.

The third stage is that of organization, which means holding local meetings with rank-and-file militants in assemblies in each municipality, and later in each state, culminating at the national level to decide about the founding of the current.

All of this could be geared toward the internal elections for the regional and national leadership positions of the PSUV, which according to party statutes is the next event that is set to take place in the party. Apparently they are scheduled for the first quarter of the year 2011. The Radical Socialist Current should participate in this process by being a reference point for the PSUV members who want to defeat the party machinery and defeat the fifth columns.

Translated by James Suggett for Marxist.com and Venezuelanalysis.com.