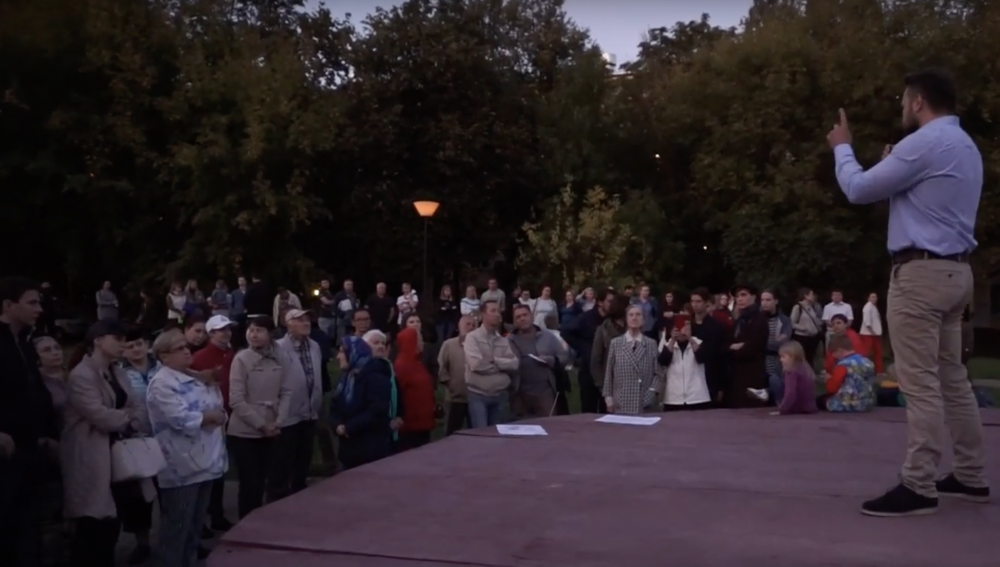 “This land is your land, this city is your city! And no one has the right to decide its future, but you – the working people of Moscow!” This appeal from a Russian IMT activist was greeted with an explosion of applause at a recent rally in the Zyuzino district of Moscow.

For a whole month, IMT activists in Moscow have been leading a grassroots fight against the seizure of land from a public park by the Russian Orthodox Church, and its supporters in the local authorities and the construction mafia. A meeting on 25 August, organised by our comrades, gathered the support of more than 300 locals, three independent local council deputies, and the Communist Party candidate for the Moscow parliament in the district.

This first success is just the beginning of a broad campaign to fight against the reactionary forces in the capital of Russia, which are on the offensive.

It is too early to say that we can smell revolution in the air, but the working class of Moscow is assuredly rousing from its slumber, ready to combat its foes.

The collusion between the ruling regime and the church (which plays the role of the government’s ideological wing) is particularly keenly felt in Moscow.

In 2011, Moscow city hall launched an odious programme called “200 Temples” - the objective of which speaks for itself. The authorities took a special interest in the desire of a certain group of Muscovites for spiritual nourishment. Following the laws of the market, they rushed to meet this demand with supply.

However, the authorities have systematically spit on the interests and opinions of other groups of Muscovites (believers and atheists alike). It just so happens that, for the current government, parishioners of the Russian Orthodox Church are “more equal” than other citizens.

A few years ago, the Zyuzino district got its first taste of these policies with the appearance of the wooden “Veniamin’s church” (surrounded by a fenced area) between the streets of Kakhovka and Bolshaya Yushunskaya, in the park surrounding the Kakhovsky pond. There was also a tax-free bakery business attached. 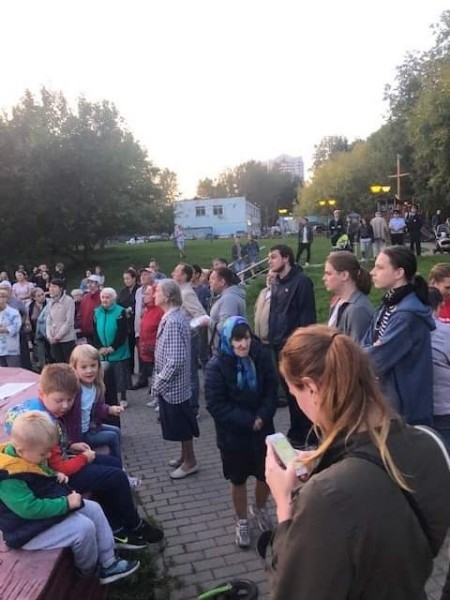 IMT activists in Moscow have been leading a fight against the seizure of land from a public park by the Orthodox Church / Image: own work

The dubious nature of the whole situation can be seen in the suspicious way this temple originally appeared. A group of parishioners (who are currently aggressively pushing for the construction of a new temple), claim that its installation was approved after a public hearing with the residents of the district.

However, it turns out that none of the residents of the district were aware of these hearings... except for the parishioners themselves. Construction was approved personally by the acting head of the district, the United Russia party’s Shcherbakov.

One theory is the United Russia-controlled authorities, in conspiracy with the Russian Orthodox Church, quietly gathered interested parties to install the temple on public land. Together with the priests, they passed this off as a “public hearing”. For any readers of a fragile disposition, we stress that this is all speculative.

The residents then indignantly resigned themselves to the fact that they would have to listen to the ringing of church bells every Sunday morning instead of enjoying a healthy sleep after a working week.

But now, the next major church is currently being built directly next to the Kakhovskaya metro station. Obviously, nobody in a position of power considered the feelings of observant Pakistani and Afghan Muslims working in the nearby market.

It would seem that this should more than satisfy the needs of the parishioners. But it turns out that is not enough. The district authorities plan to expand the territory of the temple in the park, to transform it into a capital building, with the addition of a parish school.

Nearby trees have already begun to be felled, and a playground and amphitheatre (a place of public gatherings and local meetings) are due to face the axe as well. Another important detail here is that the expansion project most likely involves the complete transfer of the park’s land from municipal ownership to the church’s private, corporate property. In the future, it will be free to do whatever it wants with this land.

It is clear that not everyone was enthusiastic about this prospect. A group of concerned citizens from the district, led by local IMT activists, decided to try to deal with the issue through legal means, collecting signatures of residents of the district for a petition to stop this outrage.

Two rounds of petitioning were conducted against the church, which was met most enthusiastically by residents of nearby houses, eager to stand up for their interests. However, the petitioners also drew the attention of the Russian Orthodox Church’s "support group", which attacked both events.

This group consists mainly of elderly parishioners, characterised by an almost medieval zeal in the struggle to defend the church’s real estate.

At the first meeting, they cried out “burn in hell!” in an outburst of truly Christian hatred, while one of the representatives of the support group tried to tear the petition sheets from the hands of one of our supporters and rip them up.

The ringleader of the group utilised such hooligan tactics as talking over opponents and repeating phrases like “I’m a Muscovite, and you are nobody here… you don’t even live here”, etc. The last comment, by the way, was made to a person who lives directly adjacent to Kakhovsky pond. Despite this, the defenders of the park were not intimidated by such thuggery, and demonstrated their readiness to defend their position in an open debate.

“This is working people’s land!”

A rally, organised by activists of the IMT against the construction of temples in the ROC district park, was held on 25 August. Despite the holiday season, more than 300 residents of the area gathered to defend their rights. Lyubov Nikitina (parliamentary candidate for the Communist Party of the Russian Federation) and independent municipal deputies Alexander Zamyatin and Mikhail Ivanov took part in the rally.

Everyone recalls the recent protests against temple construction in Yekaterinburg (formerly, Sverdlovsk), and today precisely the thing that is happening in Moscow. Now as then, citizens defending the right to public spaces are confronted by the might of the authorities, the church's fighting groups and fascists repainted as Orthodox activists.

The latter were especially noticeable in Moscow, given the xenophobic antics and statements of the parishioners upon hearing the (from their point of view) not-quite-Russian surname of one of the speakers, accompanied by exclamations too vile to relate. If fascism can be expected in Russia, then it will emerge from these ardent supporters of the current government and the Orthodox Church. 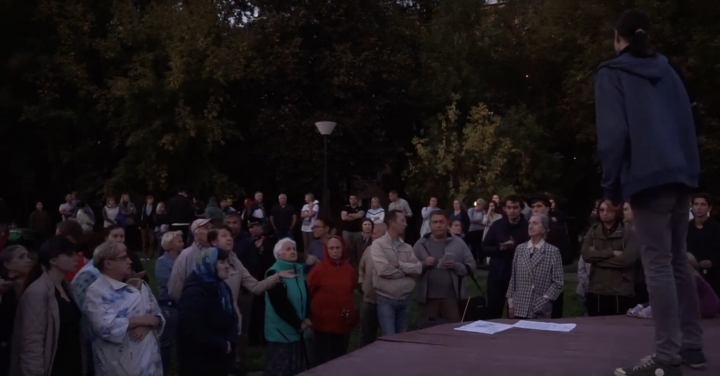 300 people attended our rally against the Church's land grab / Image: own work

In their speeches, representatives of the IMT especially emphasised two central issues: the struggle against the Moscow construction mafia; and the struggle of working Moscow citizens for their rights in general. This includes the right to decide the fate of the land on which they live and work, land the current government consistently attempts to steal from them.

It is noteworthy that supporters of the construction of the temple came in a pre-organised group of 10 and engaged in provocative behaviour at the rally - crowding around the stage and trying to scream and intimidate the audience. But the protesters kept arriving, signed the petition, and confronted the provocateurs. The crowd was so large and lively, that people could not fit on the narrow platform in front of the stage!

At the beginning of the rally, protesters noted the presence of persons from the quasi-fascist organisation “Sorok Sorokov” (abbreviated to SS, which has certain connotations). These were the same characters who took part in provocations and assaults against people defending Torfyanka Park from illegal development. Now, they are apparently getting ready to do the same thing again.

In the end, supporters of the construction of the temple made it clear to residents that, despite the illegality of the development, and the opinion of the majority of Zyuzino residents, they are not going to give up. They will have their temple at all costs.

They hope that we will be frightened by their threats, they want to make us sit home and keep silent. Will we let ourselves be intimidated?

The Muscovites at the rally answered decisively: “No! This is working people's land!”