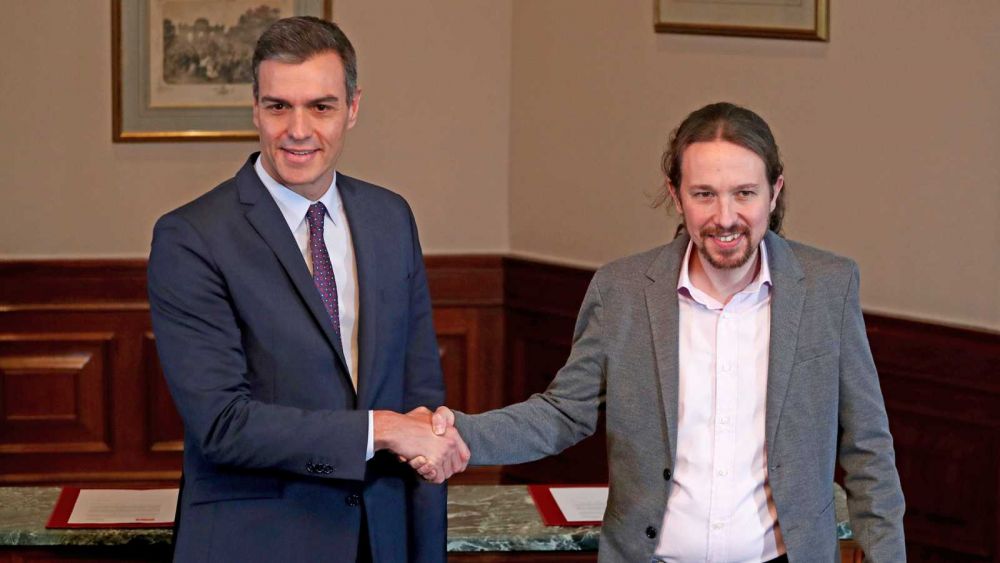 The 10 November Spanish elections have left a more unstable situation than the 28 April elections. Although the right has been defeated again, the PSOE leadership failed in its political calculation that it would emerge strengthened, and the tactics of the UP leadership – to ruin Sanchez's investiture and risk new elections – were also an error that lost them votes and seats. Political polarisation, agitated by the Catalan national question, is reflected in the strengthening of the extreme right, of Catalan independence parties, and Basque and Galician nationalism.

The nationalist and independentist left (ERC, EH Bildu, BNG, CUP) got a combined 1.5 million votes. As in 28A, the result of the nationalist left reinforced the victory of the left throughout the country. The Catalan independence movement gained one more deputy with 23 total. PNV went from 6 to 7, EH Bildu from 4 to 5, and BNG got 1 deputy after years of absence from parliament.

The results on the right

Despite all the clamour, Vox got less than the total vote of Unidas Podemos and Más País (a split from UP). The most remarkable fact about the votes for the right is the realignment between the three parties. PP and Vox have swallowed up Ciudadanos, whose support was reduced to a paltry 6.7 percent. Of the 2.5 million votes lost by Ciudadanos, Vox got 963,000, PP got 663,000 and 900,000 Cs voters abstained.

The vote for Vox was nourished by the petit bourgeoisie in the rich neighbourhoods: backward and reactionary business owners, public employees, teachers, professionals as well as depoliticised layers, which have been hypnotised by the toxic vapours of reactionary Spanish nationalism, especially in areas of high concentration of immigrants and social decay. 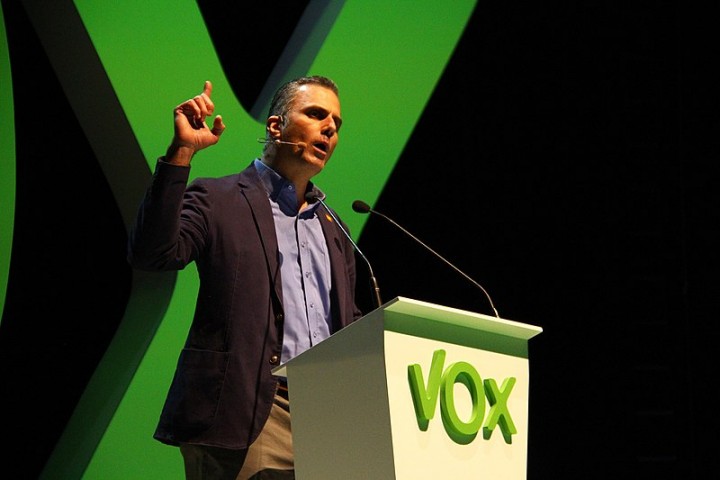 PP and Vox swallowed up Ciudadanos, with support for Vox nourished by hysterical petty-bourgeois and depoliticised elements. However, they still got less support than the total vote for UP and Más País / Image: Contando Estrelas

Despite the lack of motivation to vote again, and the reactionary environment that was created by the outpouring of Spanish patriotism after the ruling of Procés in Catalonia, the left vote is strong in all working-class areas, almost without exception. Thus, although the right won in the greater Madrid region, the left won throughout the red belt that surrounds the capital as well as in all the working-class neighbourhoods of the city. And the same can be said of all the major cities and proletarian areas of Spain. In the end, class instinct and historical memory of "No Pasarán" (They shall not pass!) were present.

The reactionary ideas of Vox can only have a mass echo in the backward, hysterical and unstable layers of the petty bourgeoisie, but they cannot reach a significant majority in the population. On the contrary, sooner or later they will find active resistance in the working-class neighbourhoods and youth, and will provoke a radicalisation on the left, which is what the most insightful amongst the ruling class fear.

At noon on Tuesday, 12 November, the leaders of PSOE and UP, Pedro Sánchez and Pablo Iglesias, unexpectedly announced an agreement to form a coalition government. This decision has taken everyone by surprise, as no contact or negotiation between the two took place between Sunday and Monday. In any case, this coalition government, if sworn in as it seems likely, will open up a new stage in the political situation and will have important consequences for the future of the Spanish left.

This coalition was unforeseen due to the resounding opposition of Sánchez and the socialist leadership to this possibility throughout the previous period, following the guidelines of the ruling class. We must wait for the final conformation of the government, which has been delayed until the approval of the investiture, to see if Sánchez will include moderate elements in the coalition, such as Más País and the remnants of Cs. This would create a counterbalance to UP, dilute its role and thus reduce the hope for change in working families and ensure a single stance on the Catalan conflict.

To avoid calling for new elections (which would plunge the political regime into a huge crisis of authority) Sánchez has had to accept a precarious majority in congress, with outside support, to make his government viable.

It is clear that the decisive sectors of the bourgeoisie have some concern about the entry of UP into the government, but they have no alternative. They hope that Sánchez will keep the “radical” aspirations of UP at bay and that moderation exhibited by Pablo Iglesias will be maintained in the new government.

Undoubtedly, the coalition has generated great expectations in working families and the rank-and-file of both parties. The pressing social problems of lack of quality employment and affordable housing, and the anguish of daily life for millions of people in working-class neighbourhoods and towns, desperately need to be resolved. Also the concern about the rise of the Francoist extreme right demands a closing of the ranks to present a resounding resistance. We fully understand this feeling of hope and expectations, and we stand in solidarity.

But the question that must be answered is as follows: will this government be able to satisfy the needs of working families?

In the agreement between PSOE-UP, it is not clear whether it will defend and improve the rights and quality of life of the working class. It does not mention the repeal of the PP labour reform. It does not promise to reverse the cuts applied to public health and medical care at home since the beginning of the crisis or to make nursery schools free up to the age of three. The only reference to housing is completely vague: "Housing as a right and not as mere merchandise”. It ensures “the sustainability of the public pension system and its revaluation according to the cost of living”. But will it be fixed forever by law, as demanded by the pension movement and the UP itself, or will it only be renewed every year, depending on the economic situation, as the PSOE has stated so far? According to the agreement: "the control of public spending is essential for the maintenance of a solid and lasting welfare state" and stresses the need for the "fiscal responsibility of Spain with Europe". This wording has always been used to justify austerity policies.

On the Catalan question, it suggests: "dialogue in Catalonia will be encouraged, looking for forms of understanding and compromise, always within the Constitution”. The Constitution of the 78 regime does not contemplate the right of self-determination. In the negotiations after 28A, Pablo Iglesias declared that he would comply with Sánchez's policy towards Catalonia, which, up to now, has been characterised by relying on the Spanish nationalism of the Francoist right and repressing the independence movement both judicially and with the police.

What will happen to the UP programme? Will it be kept in the drawer until the next election? Being part of this government implies becoming jointly responsible for its actions and not advocating its own agenda or programme in parliament. In fact, in the opening lines of the agreement, it is said: "the new government will be governed by the principles of cohesion, loyalty and government solidarity". Will the leaders of UP then cease to publicly defend the repeal of the PP labour reform if the PSOE does not accept it? We fear that the leaders of UP will end up tied to the "common programme" and dilute their voice. 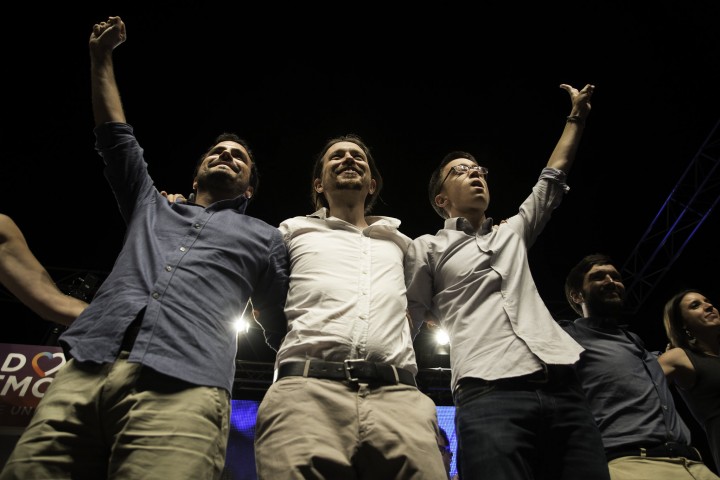 Unidos Podemos must not sacrifice its programme to form this government / Image: Flickr, Adolfo Lujan

In addition, a new economic crisis is approaching that could be very violent, and the Spanish situation is worse than before the 2008 crisis. It is probable that the leadership of the PSOE will serve the interests of the capital, and decide that it is the workers who must pay for the crisis, with fewer social services, new labour counter-reforms, reduction of the pensions and social welfare, etc. The PSOE-UP government will be used to do the dirty work of big capital, hastening its discrediting with the working families and dragging the UP down with it, similar to what happened to Zapatero in the previous crisis.

The right and the extreme right would be happy, alone in the opposition, to exploit the disaster on the left demagogically with a "social discourse". All this would create instability and a government crisis that would lead to further elections and, more than likely, a victory for the most reactionary right in 40 years, with a weakened and discredited left. This would be a nightmare for working families.

What the UP leadership should do in the current circumstances, rather than handing a blank check to Sánchez (agreeing to enter his government without a specific programme in advance) is to publicly present to Sánchez the key demands of its electoral programme, such as a minimum salary of €1,200, a 34-hour work week without loss of pay, maximum temporary contracts of six months and the expropriation for use of the empty homes of those who own 10 homes or more, the popular election of the high courts and judicial authorities of the state (General Council of the Judiciary, Supreme Court, Constitutional Court, etc.), and the right to self-determination for Catalonia, or the repeal of article 135 of the Constitution.

We must expose Sánchez to his supporters so that he can express whether he really wants to solve the serious social problems or only make cosmetic changes, using UP as a left-wing crutch to endorse his cowardly and half-hearted policies. If that is the case, UP would accumulate sufficient arguments to reject its entry into such a government.

Thus, UP should cross over to the opposition and support the investiture of Sánchez. In the opposition, UP could support all the progressive measures of the Sánchez government, be the most prominent opponent of the right and the extreme right, oppose Sánchez's reactionary proposals that go against the interests of the working-class, and have full freedom to defend their own programme without changes. Above all they should mobilise in the street to pressure the government and the employers for their demands.

However, we are concerned with UP's drift away from the street towards government bureaucracy, where they can be sullied as part of the PSOE government. This drift started long ago and their entering into the coalition has implied a strengthening of bureaucratisation and the silencing of internal criticism.

The entry into the PSOE government will put UP in a new dynamic, and under greater pressure. Therefore, the participation and control of the rank and file of Podemos and IU, of the activity of its ministers and senior officials, will be indispensable.

We appeal to the rank and file of Podemos and IU in the demand to democratically convene extraordinary assemblies in their organisations to discuss and promote UP's participation in the government, what programme they should defend, what to do on the street, how to avoid further bureaucratisation and an unmeasured bloating of the UP staff apparatus etc.

For a time, the working class, youth, women fighting for their rights, and pensioners, will wait before the new government is officially formed. But the coalition will be a prisoner between the conflicting interests of workers and bosses, between the forces of progress and reaction that nest in all parts of the state apparatus.

Sooner rather than later the PSOE-UP government will have to choose. Experience shows, particularly in periods of economic and social crisis, that without a programme of socialist transformation of society any left-wing government, even with the most well-intentioned leaders at the head of it, tends to yield to the pressures of the powerful.

The rank and file members and voters of UP must take their organisations in their own hands, so that they serve their interests and not those of the ruling class, who profit from oppression, exploitation and social injustice inflicted against the suffering and toiling majority.