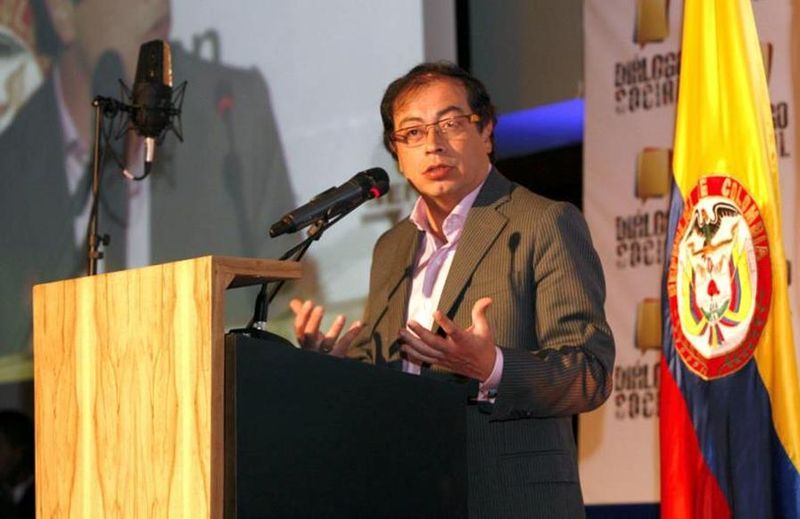 This article was sent in by one of our readers. We think it makes some interesting points regarding the upcoming Colombian elections, the candidature of Gustavo Petro and the vicious opposition he has faced from the ruling class.

On May 27, the Colombian people will face a historical presidential election. According to polls, and even Google trends, a triumph of the charismatic left-wing candidate, Gustavo Petro, is possible. In one of the most reactionary countries on the continent, where the last left-wing government ruled in 1854, this possibility of a political turnover has unleashed out the anger of the Colombian ruling class. A frightening campaign, full of fake news and lies, has been launched against Gustavo Petro and his followers. We will explain the importance of this election, discuss Gustavo Petro’s reforms programme and some of its limitations and deal with the violent opposition undertaken by the Colombian ruling class.

Colombia is one of the most unequal, conservative and violent countries in South America. In 2010, richest 1 percent of Colombians controlled 20.4 percent of national income. Big plantations (0.5 percent of the farms) constituted 68.2 percent of the land in 2014. In a country with a GDP per capita of only U$ 5,805 dollars in 2016, such patrimony and income concentration means poverty reigns alongside opulence. While 26.9 percent of the Colombian population lives in poverty, five Colombian capitalists appear in the Forbes rich list with a combined wealth of 27.2bn dollars. 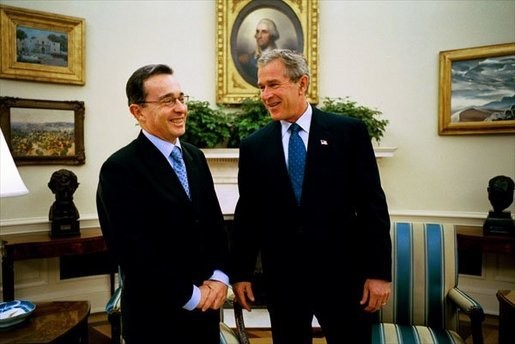 Despite its high inequality, Colombia is typically very conservative in political and cultural terms. Its last left-wing government was in 1854, under José María Melo, and it only lasted eight months before it was violently overthrown. Unlike almost all Latin American countries in recent years, there was no a ‘progressive wave’ in Colombia. While in Ecuador, Bolivia, Venezuela, Argentina governments were elected that ‒ in one degree or another ‒ rejected neoliberalism and clashed with US foreign policy, Colombian governments backed the western imperialist agenda in Latin America and the rest of the world.

The Colombian ruling class supported the coup d’état in Venezuela in 2002. During the presidency of Alvaro Uribe, the Colombian government supported US President Bush’s invasion of Iraq and Afghanistan, and the Colombian Air Force even bombed Ecuadorian territory. Moreover, the Colombian oligarchy has been in a longstanding political-military alliance with Israel, and they have supported colonialism and genocide against Palestinian people.

In order to defend their class interests, the Colombian oligarchy has appealed, directly and indirectly, to violence and state terrorism. During 1980-90, an entire left political party (Unión Patriótica – UP) was exterminated, including two popular presidential candidates and over 5,000 activists. Between 2002-2010, nearly 10,000 civilians were murdered by the Colombian army. Despite the peace agreement between 60-year-old guerrilla organization, FARC and the government in 2016, more than 200 social leaders, including peasants, unionists, journalists and environmentalist leaders have been murdered during the last two years.

In this challenging context, Gustavo Petro’s left-oriented programme has found wide support among millions of the Colombian working people and poor, and a fierce opposition from the ruling class. The reason underlying this is the progressive character of Gustavo Petro’s policy. In general terms, it he proposes a wide reform programme oriented towards improving conditions of working and poor people, reducing exploitation and inequality, supporting economic development and environmental conservation. His programme includes reforms to agriculture, taxation, labor rights, pensions, health, education and environmental issues.

The Gini coefficient, that quantifies the land-property concentration, stands at 89.7 in Colombia ‒ the highest in the region. In order to reduce the high land concentration, and misery in rural areas, Gustavo Petro proposes a strong property tax on unproductive big plantations. The aim of this proposal is to force landowners to become productive with their land or sell it to the state. If they sell to the state, that land will be redistributed to poor peasants. 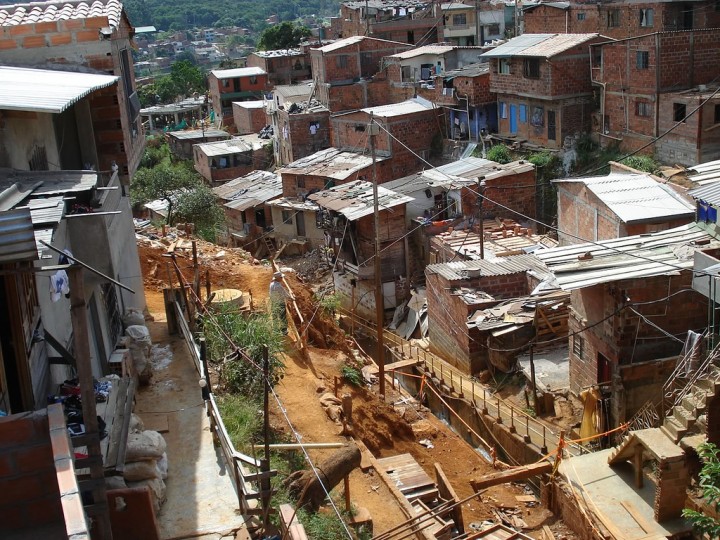 Poverty and inequality in Colombia are at extreme levels / Image: Luis Perez

Moreover, Gustavo Petro proposes a new fiscal policy. He plans to eliminate tax exemptions and subsidies to big capital and to increase taxes on dividends and foreign profits. This tax reform is necessary for a country where taxes on income, profits, and capital cover only 35.2 percent of total taxes (in the US is 92.2 percent). With the increase of the government income, Mr. Petro plans to increase social expenditure, especially in health and education. Public and free tertiary education is a central aim in his program.

In a country with a weekly legal workday of 48 hours, and a monthly minimum wage of just 272 USD, Gustavo Petro proposes a labor reform for reducing exploitation. Specifically, he plans to reduce precarity, and increase wages. This labor reform will be accompanied by a nationalization of pension funds, now in control of financial groups, with the purpose of expanding coverage.

Finally, Gustavo Petro's programme criticises fossil fuel extraction and metal mining as economically unsustainable because of their negative environmental impacts and rentier logic. They destroy ecosystems and generate income for few people, increasing inequality. Instead, he proposes industrialization based on renewable energies.

The hatred of the ruling class

While Gustavo Petro’s programme has been supported by the Colombian working class, it has also been rejected and attacked by the ruling class. The entire oligarchic intellectual bloc (journalists, political analysts, religious leaders and media) has attacked Gustavo Petro’s campaign on a daily basis. Slander and misinformation have also been spread by conservative and reactionary parties via social networks and media. They accuse Gustavo Petro of being ‘communist’ and ‘Castro-Chavist’. They claim that a Petro government will expropriate small property (including houses and cars) and bring hunger and poverty to the nation. Likewise, they try to link Petro with the Venezuelan government and its current economic crisis. Additionally, they spread xenophobia and discrimination against Venezuelan immigrants. The Colombian military forces also seem to be hostile to Gustavo Petro ‒ which is particularly dangerous. 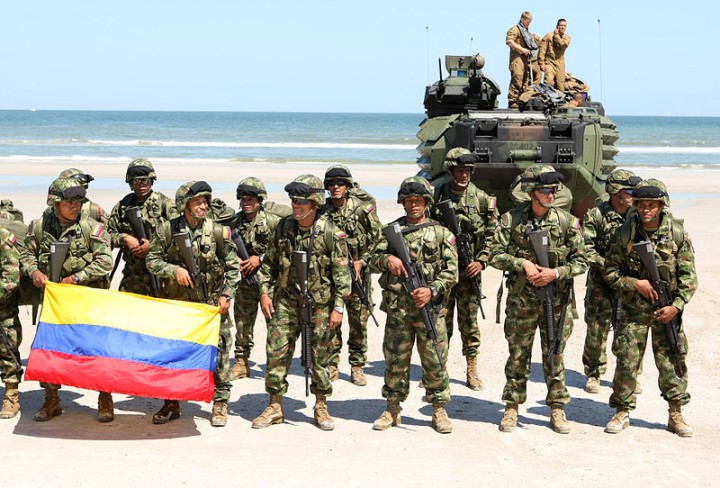 The Colombian oligarchy and military both oppose Petro / Image: CWO Keith A. Stevenson

These media, political and ideological attacks express the frontal opposition of the economic ruling class to any alternative program. The class interests of bankers, industrials, traders, landowners and managers would be affected by rural, tax, labor and other proposed reforms. Their control over land, pension funds, ecosystems, government expenses and the labor force would be reduced. This lies at the roots of the ruling class’s hatred of Gustavo Petro’s candidature. They fear that a victory for Petro would encourage the struggle and mobilization of workers, peasants and the youth. Furthermore, the Colombian oligarchy has its own candidates: Ivan Duque, German Vargas Lleras and Sergio Fajardo. All of them, with different marketing approaches, try to defend the current reactionary social order in Colombia and even deepen it.

Despite the progressive character of Petro’s reform programme, it has many limitations. These reformist attempt to politics to achieve important economic, social and political changes for working and poor people; but within the limits of a capitalist society. Namely, within a class society where the production and investment are private and oriented to extracting surplus value from working class; and where the state and the civil society are under the control of the capitalist class. In such a social order, reforms face important limits and obstacles ‒ both political and economic. 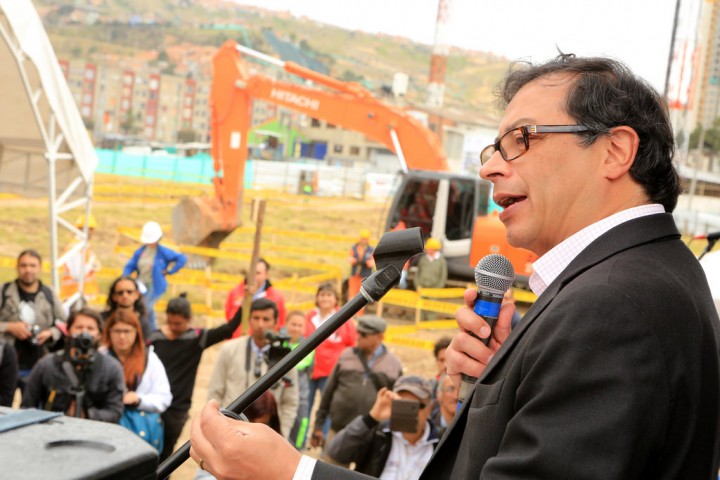 If Gustavo Petro were to win, his programme will face the fierce political opposition of the ruling class. They control the congress, the judicial branch, the military forces and the media. Moreover, their conservatives and reactionary parties (like Centro Democrático) have important support among millions of workers, peasants and the petty-bourgeoisie. They will mobilise those forces against Petro. Likewise, since the Colombian oligarchy owns the financial system, the big industry, trade and transport, they could use an investment strike in order to affect the economy and generate popular discontent.

Perhaps to avoid criticism from the right, Petro has made a point of criticizing and distancing himself from the Bolivarian Revolution in Venezuela, saying for instance that the recent elections were not legitimate. What he should have done is denounce the hypocrisy of the US, with its history of imperialist aggression and its support for the 2002 coup in Venezuela, talking about democracy. He should have denounced the hypocrisy of governments like Colombia, Argentina, Brazil and Mexico, which fully supported the coup in 2009, and the electoral fraud in Honduras. As a matter of fact, however much he tries to distance himself from Venezuela, the oligarchy will continue to accuse Petro of “Castro-Chavism”. His statements should not be aimed at appeasing the ruling class, but rather at explaining matters to the workers and peasants.

For those reasons is necessary for the working class to strengthen its own independent organisations around and beyond Gustavo Petro’s programme. Even if Mr. Petro does not win the presidential election, Colombian working class needs an organization of its own based on a programme that links the struggle for immediate reforms to the socialist transformation of society. In a country like Colombia, any advances in democratic and workers’ rights and agrarian reform, will come into direct conflict with the reactionary and pro-imperialist ruling class, and they will only be secured as part of the struggle to expropriate the oligarchy and the multinationals to put the country’s economic resources in the hands of the working people. In turn, that struggle cannot be limited to the borders of Colombia but must link up with the struggle of workers and the oppressed across the continent and beyond.