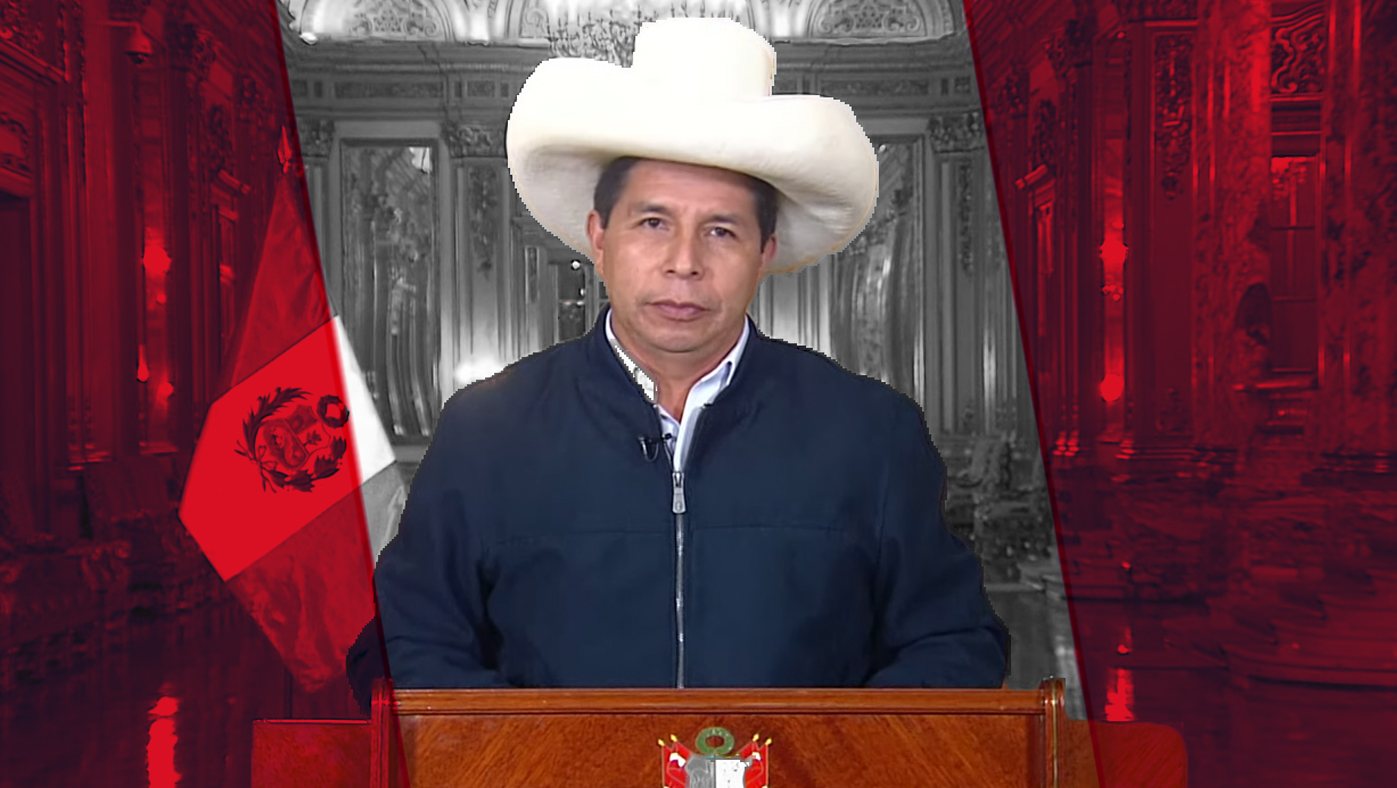 A member of our editorial board, Jorge Martín, was interviewed by the Turkish daily paper BirGün about the recent explosive developments in Peru, in which a Congressional coup has seen left-wing president Pedro Castillo deposed and arrested. This has now provoked a mass protest movement, led by enraged workers and poor peasants.

We provide an English translation of that interview below.

Journalist Martín recently spoke to BirGün. The capitalist oligarchy, the banks, the media, the landowners, and the representatives of multinational mining companies could not swallow this popular figure occupying the presidency. Castillo’s attempt to compromise, however, by making concessions did not satisfy the ruling class. But on the other hand, sections of the left were deeply disappointed by the concessions Castillo made.

The political crisis and protests continue in Peru, which started after the left-wing President Pedro Castillo was dismissed by the Congress on 7 December. Andahuaylas Airport was closed to flights as the protests intensified, especially in the south of the country. Former president Castillo, who was impeached by parliament, is being held in prison. To discuss the latest developments in the country, the crisis and the Congressional Coup, we spoke with Jorge Martin. 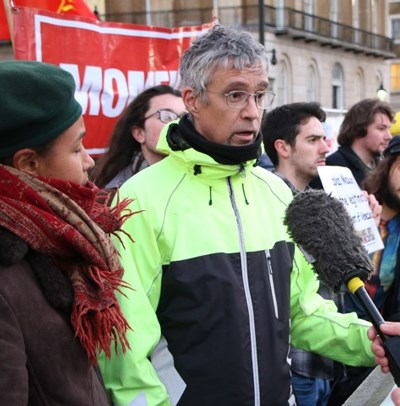 Who is behind the Congressional Coup in Peru?

It is clear that the removal of President Pedro Castillo is the work of the right wing, the CONFIEP (bosses' organisation), multinational mining companies, the bourgeois media, the military and the judiciary, as well as the OAS (Organisation of American States) and the US embassy. They also counted on the support of members of Castillo's own cabinet, including the vice president.

Castillo has been a target of the Peruvian oligarchy ever since he took office. Can you summarise the process that led to Castillo's arrest?

From the beginning, the Peruvian capitalist oligarchy could not accept that a teacher unionist from a rural area was running the country. They began to pressure him in every possible way, attacking his ministers, his prime minister, using the judiciary, and presenting three impeachment motions in Congress, where he did not have a majority. Finally, on December 7, a new impeachment motion was presented to Congress. That same day, Castillo gave a speech detailing the ways in which the right wing prevented him from ruling, and issued a decree to close Congress and call for new elections. This was very dangerous for the oligarchy because Congress was their main point of support in the existing institutions. They couldn't accept this.

What did they do?

They took swift action through the judiciary, declaring the president "in rebellion" and issuing a warrant for his arrest. The army and police sided with the coup. The president was arrested by his own security guards while trying to reach the Mexican or Argentine embassy for security. His allies, including the vice president, deserted him. Congress convened and voted to dismiss him on the grounds of "permanent moral incompetence". The coup was complete.

Who opposed the ruling left-wing government, and why?

Castillo was nominated for Perú Libre with the slogan: 'Never again poor people in a rich country'. His programme included the nationalisation of gas and the renegotiation of contracts with multinational mining companies. He especially enjoyed support from the working-class and poor peasant majority, traditionally excluded from power. Castillo’s campaign also represented the indigenous people's revolt against the upper-class elites in Lima, linked to imperialist interests. The Peruvian capitalist oligarchy, the owners of the banks, the media, the land, those closely linked to the multinational mining companies—including Chinese companies—couldn't swallow the idea that a figure from the working people should be president.

Were Castillo's concessions not enough for the rulers?

In terms of concrete policy, Castillo had already given in to pressure from the right wing and the ruling class, by removing the more radical ministers and prime ministers, visiting the US and reassuring mining multinationals, backtracking on labour rights, etc. Still, the oligarchy had to remove him, to make it clear who rules the country. Castillo did not have a parliamentary majority and therefore should have moved from the beginning to base himself on the mass mobilisation of workers and poor peasants outside of parliament. Instead, he thought that by making concessions to the ruling class he would win some breathing space.

Castillo was removed from power on accusations and allegations of "corruption, irregularity and mismanagement".

There's no basis whatsoever for any of these allegations. In fact, since they could not prove anything, they finally resorted to the accusation of "permanent moral incapacity", which can mean anything and for which no proof is required. 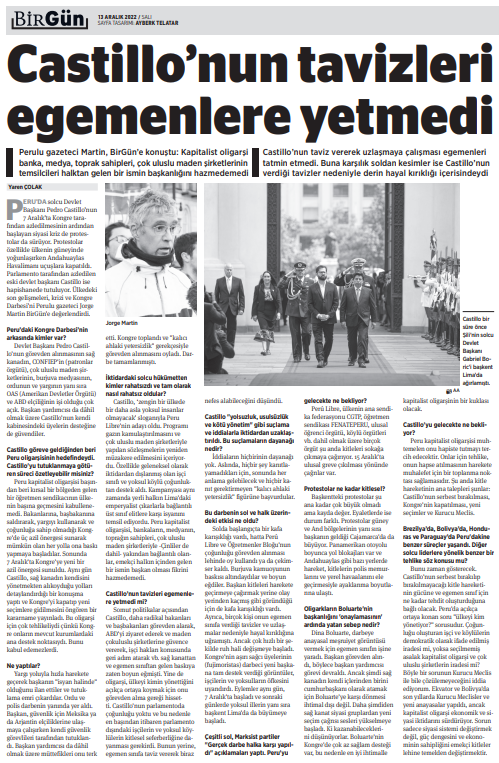 What was the impact of this coup on the left and the people?

There was initially confusion on the left, with the majority of Perú Libre and the Teachers' Bloc even voting in favour of Castillo’s dismissal or abstaining. They came under the pressure of bourgeois public opinion and gave in. There was also confusion, as the president seemed to have fled the scene rather than urging the masses to act. Also, many were disappointed by his concessions and compromises to the ruling class. But very quickly this mood began to change. The images of the far-right members of the Congress (fujimoristas) giving full support to the putschist new president aroused the anger of the workers and the poor. The protests started on the same day, on December 7, and started to grow in the capital city of Lima as well as the poorer provinces in the following days.

Various left and Marxist parties made statements saying: "the real coup was made against the people". What awaits Peru in the future?

Several organisations are now calling on the masses to come out on the streets, including Perú Libre, the country's main trade union federation CGTP, the teachers' union FENATEPERU, the national student's federation, the peasant organisations, etc. There are calls for a national strike on December 15, and in some regions already on December 12.

How big are the protests?

The protests in the capital have not been huge so far, but they are significant. In the provinces, the situation is different. Protests are growing in the southern and Andean regions, as well as in Cajamarca, where the president is from. There are roadblocks along the Pan-American highway, and in some places, such as Andahuaylas, the movement has reached insurrectionary proportions with the masses seizing police officers and taking over the local airport.

What is the reason behind the oligarchs 'confirmation' of Boluarte's presidency?

Dina Boluarte was useful for the ruling class in order to give the coup the appearance of constitutional legitimacy. The president was removed from office, so the vice president took over. But now it is not ruled out that the right wing will turn against Boluarte to appoint one of their own as president. There are already voices from the right wing political groups calling for new elections (which they think they can win). Boluarte has very little solid support in Congress, so she will be, at best, a puppet of the capitalist oligarchy.

What awaits Castillo in the future?

The Peruvian capitalist oligarchy would probably prefer to keep him in prison. The danger for them is that his imprisonment provides a rallying point for the movement. At the moment, the main demands of the mass movement are: the release of Castillo, the dissolution of Congress, new elections and a Constituent Assembly.

Similar processes to those in Peru took place in Brazil, Bolivia, Honduras and Paraguay. Is there a similar danger to other left-wing leaders?

Time will tell. Whether Castillo is released will depend on the strength of the mass movement and how much of a threat it poses to the ruling class. The question clearly posed in Peru is "who runs the country?" Is it the democratically expressed will of the majority of workers and peasants, or the will of the unelected, parasitic, capitalist oligarchy and multinational corporations? II would argue that such a question cannot even be solved with a Constituent Assembly. Ecuador and Bolivia for instance, have had Constituent Assemblies and  new constitutions in recent years, but the capitalist oligarchy maintains their economic, and political, power. The question is not just to change the political system, but to fundamentally alter the balance of power and ownership of the economy in favour of the working masses.