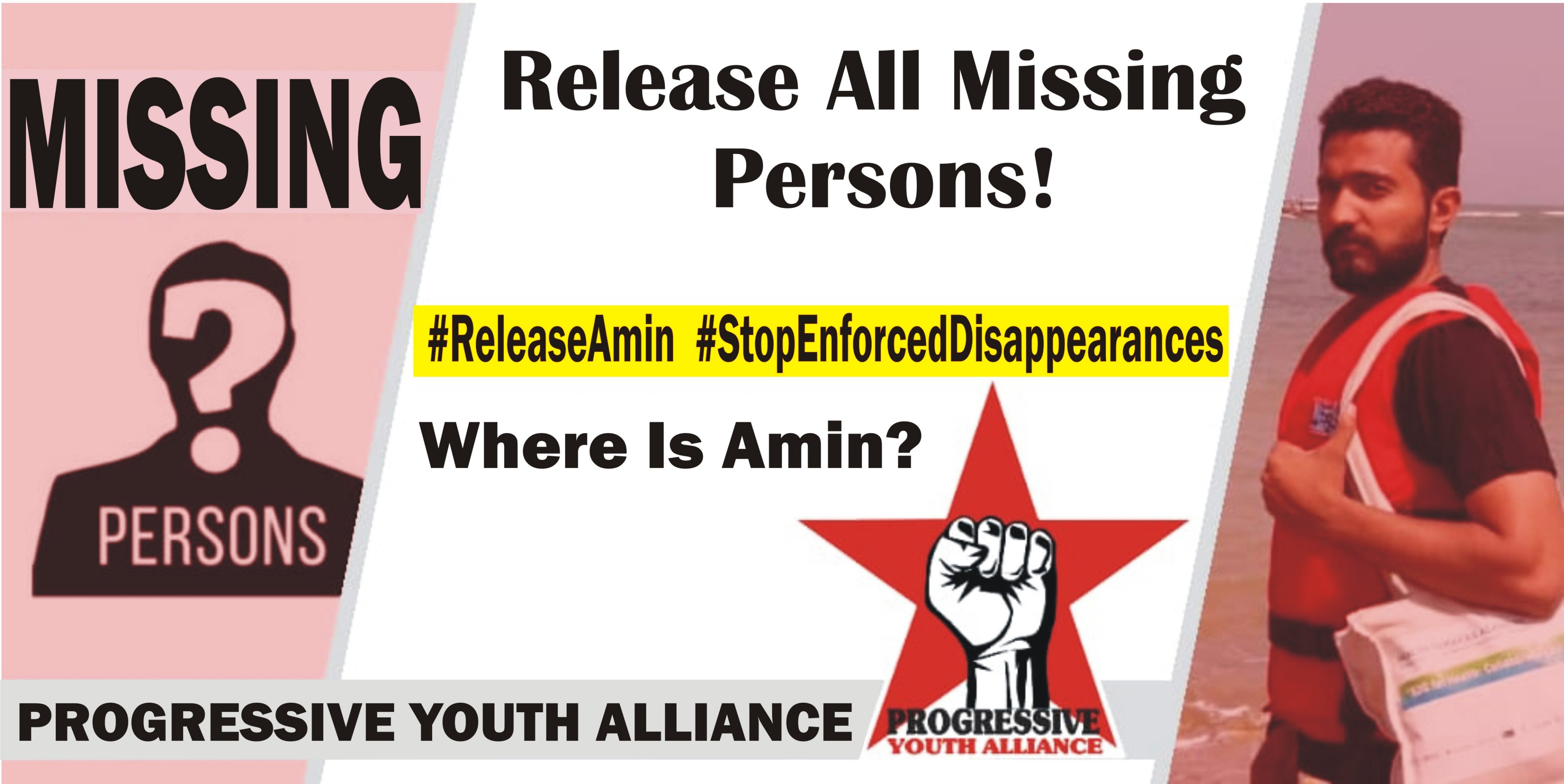 Comrade Muhammad Amin, an active member of the Progressive Youth Alliance in Karachi, was abducted from his home in the Shah Faisal Colony in Karachi by the Rangers (a paramilitary force in Pakistan) on 14 July. To this day no one knows his whereabouts, not even the police and high court in Pakistan.

On 14 July at 2am, his home was attacked by dozens of Rangers who forcefully entered the premises without any warrant or legal permission. They threatened his sister Sairo Bano (also a member of the PYA) and his mother with dire consequences, before abducting him.

The family asked about the charges against him and any other reason for this attack, but they were not given any answers. Rather, the whole home was searched and the family manhandled. Later, the family of Amin approached the police, but the local station refused to register their complaint, nor would they tell them about the whereabouts of Amin. Due to this situation, his mother is in a critical condition.

The family has also submitted an application of Habeas Corpus in the High Court after fulfilling all requirements, but the court has also delayed the matter, usually considered urgent in legal terms, and the date of hearing has been set now for 7 August.

There have been many protests in various cities across the country despite intimidation by the authorities to refrain from these protests. A big protest was also held in Karachi on 21 July in which a large number of political activists and human rights workers participated and demanded the release of Amin and other people who have been abducted by the Rangers and other security forces across the country.

Be tortured or die

The lives of Amin and many others who have been abducted in different parts of the country are hanging in the balance. In many cases before this, victims of the Rangers have been severely tortured during confinement, while many have lost their lives. Many are also forced to join special political parties supported by the ruling class. If they refuse they are threatened with implication in severe criminal offences, after which they rot in jail for the rest of their lives.

As more people plunge into extreme poverty and deprivation, State repression is reaching new levels. All this is done to curb all kinds of political processes, against the looting and plunder on the part of the elite and to defend their extremely luxurious lifestyles. These abductions have become common routine in Pakistan and in fact it has become a thriving business for personnel in the security forces. These are usually called "missing persons" in Pakistan and their number has reached thousands in recent years.

Many victims are severely tortured and then are forced to admit serious crimes without being presented in any court. Families of victims are harassed continuously and female members are sexually assaulted in several cases. Huge sums for bribes are also demanded from families to release the victims and in some cases the families are told that if they give a bribe the abducted person from their family will not be tortured. However, no contact is allowed for the victim with the family even by phone, nor the whereabouts of the victim are ever revealed. According to many reports the dead bodies of victims who died during torture in the past were only handed over to their families after getting huge sums of money as bribes. Many older family members have also died due to heart attacks after facing such barbarism.

The courts, law enforcement departments and political parties are either helpless, or are part of this dirty business of playing with people’s lives across the country, and Amin is one of them. Anyone who raises their voice against this injustice perpetrated by the security forces is labelled as a traitor and are threatened with sedition, or worst of all, abducted.

The laws in Pakistan are already hugely repressive as a result of British Imperialism, established to subjugate the colonial masses. Nowadays, State repression has gone well beyond those limits and made a farce of the legal system, which has become a fig leaf to cover their crimes.

Naked barbarism has become the order of the day across the whole country. The State, the courts and other institutions have become so rotten, corrupt and degenerate as to render itself totally useless. The State uses the support of the imperialist powers such as the USA and other western countries to perpetuate this barbarism. The financial support of the IMF and the World Bank is also contributing to this barbaric repression. 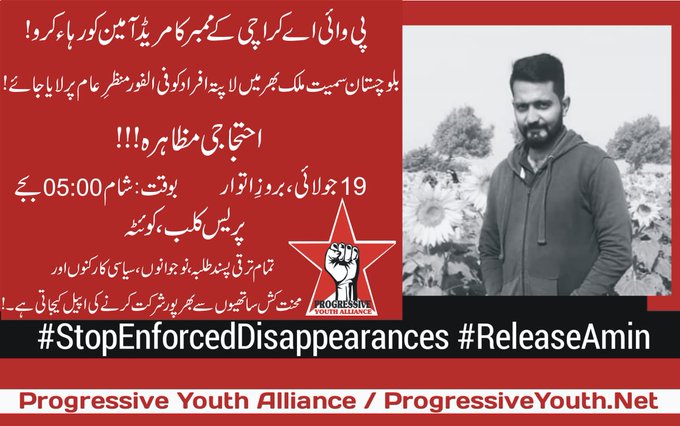 We appeal to workers of the world and our comrades in different countries to hold protests against these barbaric crimes of the Pakistani State. / Image: PYA The crisis of all the political parties here is also running very deep and the ruling class today doesn't have any political party which has even a semblance of trust among any section of masses as they did in the past. Also, attempts to impose new political parties from above are not being received enthusiastically as before, especially after the failure of the drama called the PTI, which is now supposed to be ruling the country. In all these circumstances the plight of political activists against all this injustice is worsening with state repression reaching unprecedented levels.

We appeal to workers of the world and our comrades in different countries to hold protests against these barbaric crimes of the Pakistani State. You can also:

We demand the immediate release of comrade Muhammad Amin or, if there is any charge against him, he should appear in court. We also demand the release of all people abducted by the security forces in Pakistan or, failing that, they should be presented in the courts immediately if there are any charges against them. This is a basic democratic right of every human being and we should fight for this right.