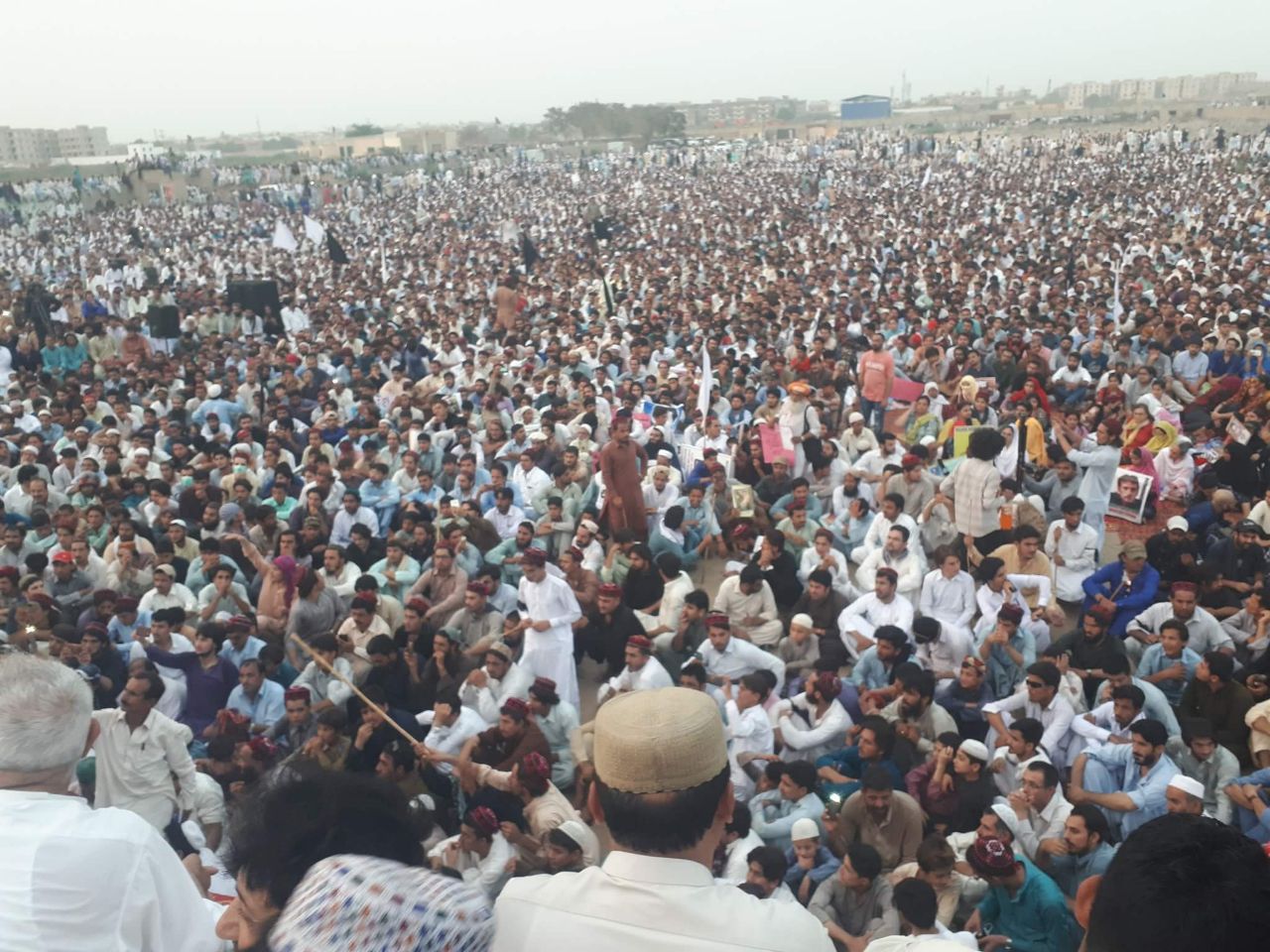 On Sunday 13 May, thousands attended a public meeting of the Pashtun Tahafuz Movement (PTM) in Karachi. Along with a huge turnout by Pashtuns, ordinary men and women from Baloch, Sindhi and Mohajir nationalities also took part.

The meeting continued until late into the night as Manzoor Pashteen, the leader of the PTM, arrived late. He was not allowed to board a plane from Islamabad to Karachi on 12 May, and had to travel by road. On the way, he was arrested several times and his identity checked at various points to discourage his travel. This made his journey even longer. Furthermore, unidentified cars followed him in a threatening manner. But despite all these hurdles he ultimately arrived at the meeting place after a 40-hour-long journey and addressed the gathering. The organisers of the meeting had announced it would continue until the arrival of Pashteen, even if they had to wait until the morning. 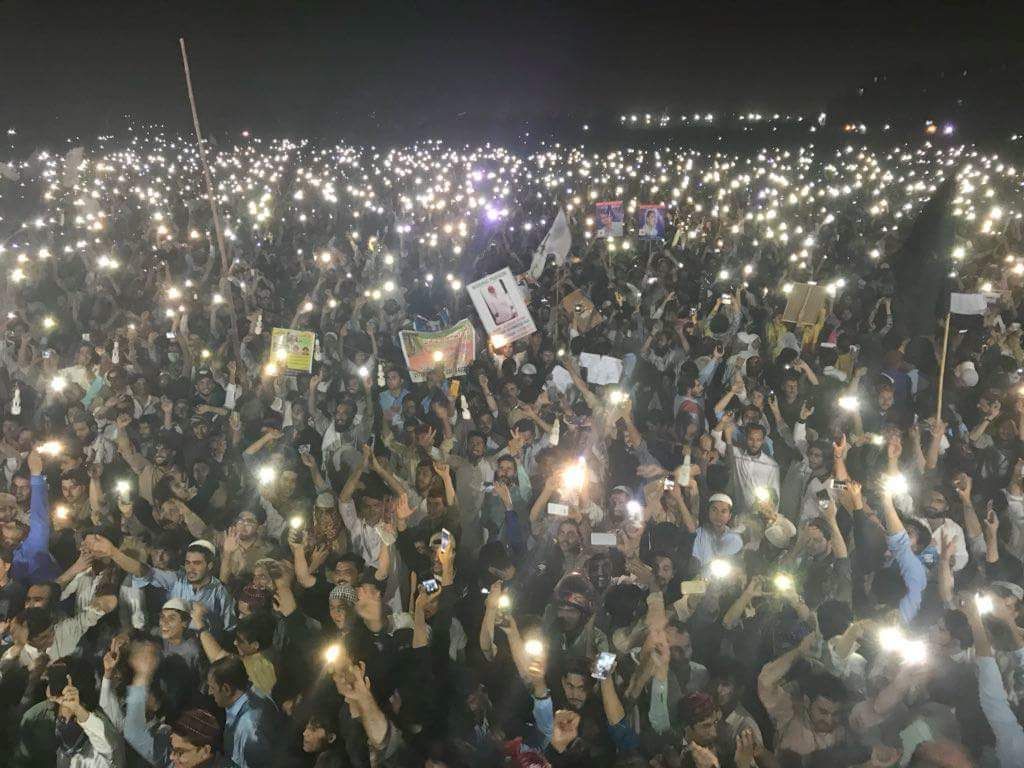 Turnout at the meeting was massive (despite a campaign of intimidation) and carried on into the night / Image: fair use

In Karachi, several measures were also taken to disrupt the meeting. First, the date of the meeting had to be changed, as other political parties (PPP, ANP and PTI) announced meetings on the same day. This was a clear attempt at sabotage by parties (linked with the establishment) that didn't want the meeting to go ahead. The PTM were then forced to change the venue from Jinnah Bagh to Al-Asif Square at Sohrab Goth. Jinnah Bagh is a central location in the city, which ordinary people could have reached quite easily. The PPP held its meeting at Jinnah Bagh on 12 May, though it couldn't pull a big gathering, despite using all the resources of Sindh government (which has ruled for the last 10 years), and despite pouring in millions of rupees to advertising and arrangements. The PTM was forced to shift its venue to a corner of the city.

Moreover, a campaign of harassment and intimidation was carried out across Karachi in the weeks before the meeting. More than 150 activists and political workers involved in preparations for the meeting were abducted, and legal cases registered against some of them. These cases included charges of sedition and terrorism. On the day of meeting, the main roads of the city were blocked and people who tried to arrive were threatened and harassed. Caravans coming from other cities were blocked on the way and dozens were arrested.

At some points, people started travelling on foot to reach the venue, hundreds of kilometers away. The venue itself was encircled by the authorities and anyone entering or leaving was threatened and their picture taken. There was complete media blackout, meaning there was no coverage of these intimidation tactics. The day before, the organisers were summoned by the Commissioner of Karachi to discuss preparations and security measures. When they reached the Commissioner office they were arrested and sent to unknown locations. Though some were released shortly after that, their mobile phones were not returned.

Despite this campaign of intimidation, the turnout was massive. A large number of women also participated, which shows high political level of the movement. A lot of women had come with pictures of their family members who had been abducted by the security forces and have been missing for many years: sometimes up to a decade. Though international media covered the event, the local media was completely silent, except for some correspondents from English-language newspapers.

Every participant had a horrible story to tell about abductions, terror and threats by the security forces. Every participant was charged with enthusiasm to win his or her rights, which was reflected in rapturously received-slogans for justice. Revolutionary songs were played from the stage, with the most popular being "What kind of freedom is this?" (the PTM’s anthem), which was repeated several times during the evening. Balochi and Sindhi women also spoke from the stage explaining their plight and sharing stories of the abduction of their family members. All these speeches got a tremendous response from the crowd.

The meeting was entirely different from recent gatherings held by other political parties in Karachi. Millions of rupees are spent on making these events a success. Companies are hired for publicity and plastering advertisements across the city, while chairs and carpets are arranged for the participants. Luxury buses and dinners are arranged, and many participants are actually paid to attend. But in this meeting there were no chairs, carpets or tents. People were sitting on the ground with nothing above their heads. All the advertising was done by grassroots organisers and participants had made huge sacrifices, given their meager incomes, to attend. Despite all these difficulties the crowd was gripped by an electric atmosphere and it looked like that a festival was going on. 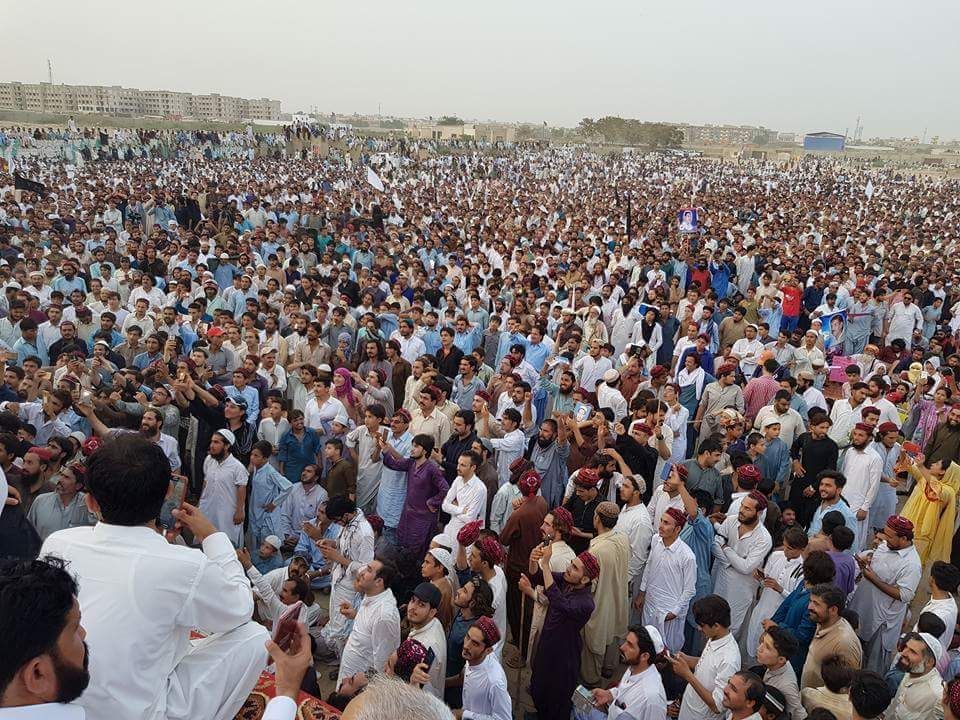 Members of many oppressed nationalities, besides Pashtuns, turned up / Image: fair use

When Pashteen came to speak on the stage it was already very late but everyone wanted to hear him. People were saying that they could listen to him for a whole night and day. They never wanted to leave! There was a sense of hope: a hope of changing their miserable conditions.

Pashteen, despite being tired from his long journey, enthused the audience with his speech. He vowed to continue his struggle until justice is done for every last victim of the Pakistani state. He said that the PTM’s demands are lawful and they want them fulfilled under the rule of law and the constitution. He said that the PTM is made up of peaceful people who have adopted peaceful methods to raise their demands, and they should not be pushed to use extreme measures. He also wore a Sindhi cap and Ajrak briefly during his speech to extend solidarity with the Sindhi people. He said that people of Sindh are also being intimidated by the state, and institutions of the people should be formed that can serve the people and not terrorise them. He also demanded the release of all activists who were abducted in Karachi prior to the meeting, or else the PTM would call worldwide protests on 15 May. 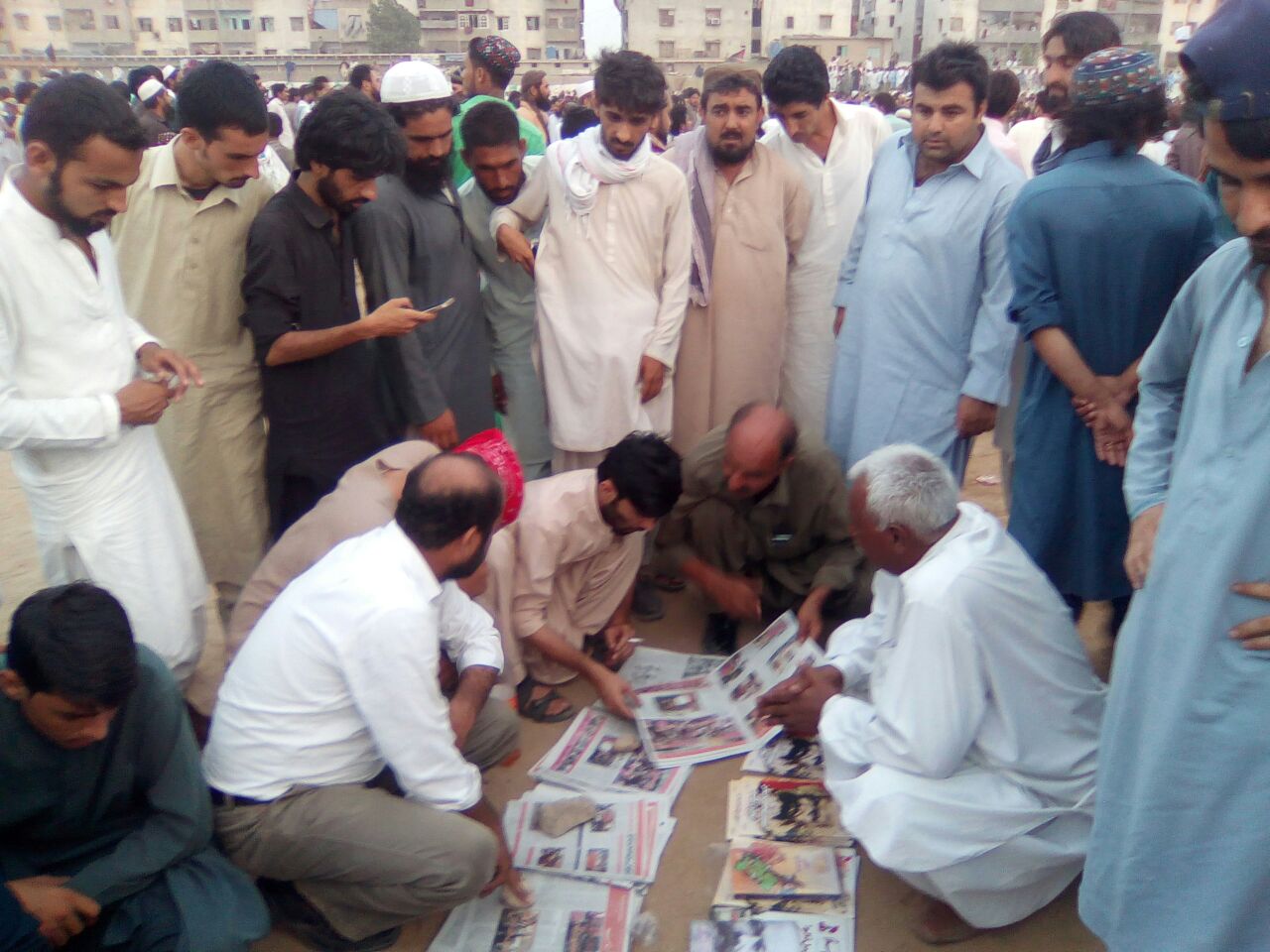 The Marxists' material was well recieved / Image: own work

Many social activists and political workers also addressed the meeting, and received a mixed response from the audience. Those who tried to spew nationalist hatred were condemned by the crowd. The character of the movement clearly shows that it wants to link up with other oppressed nationalities of the country and wage a joint struggle against the atrocities committed by the state. The PTM extending solidarity to the movement of Hazaras in Quetta is an example of this.

In Karachi, this spirit of solidarity was more visible as the city is the center of all oppressed nationalities of the country, including Sindhis, Mohajirs, Baloch, Kashmiris and many others. Speeches from the stage in favour of linking up with the Pashtun nationalist parties, which have been rejected by the masses, were also condemned. At last Ali Wazir, the main organiser of the meeting in Karachi, had to address this question in his speech, reflecting the mood of the audience. He clearly stated that there is no space for any prejudice inside the PTM and nationalist prejudice in particular would not be tolerated. He said that PTM would stand with all the oppressed nationalities of Pakistan to wage a struggle against the state. This statement received a warm response from those present. 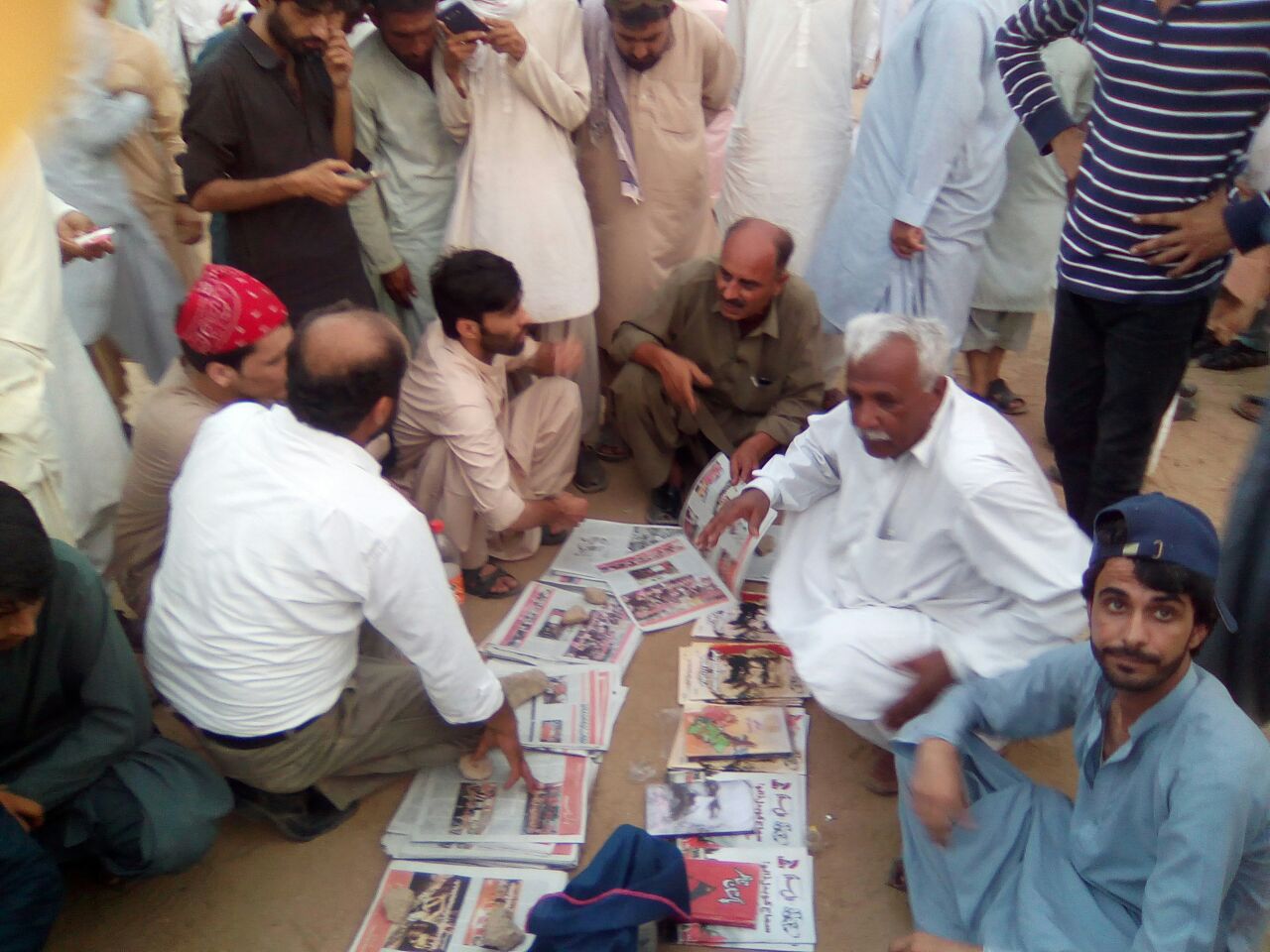 Marxists have supported the PTM since the beginning / Image: own work

The Marxist tendency was also present at the meeting with its literature, which was appreciated by all those who visited our stalls. Marxists in Pakistan have supported the PTM from the beginning and have been at the forefront of this struggle. Many comrades were abducted from Karachi on 22 April when they came to extend solidarity with the PTM at Karachi Press Club in preparation for this marvelous meeting. Although they were later released due to protests inside the country and across the world.

The meeting in Karachi has shown that, despite all attempts by the state to block this movement, it is moving forward. Though it still lacks a clear political program and an organisational structure, it has aroused enthusiasm and hope among millions living in poverty, misery and suffering. This movement has sown the seeds of bigger mass movements that will erupt sooner rather than later and will reshape the politics of Pakistan with revolutionary upheavals.