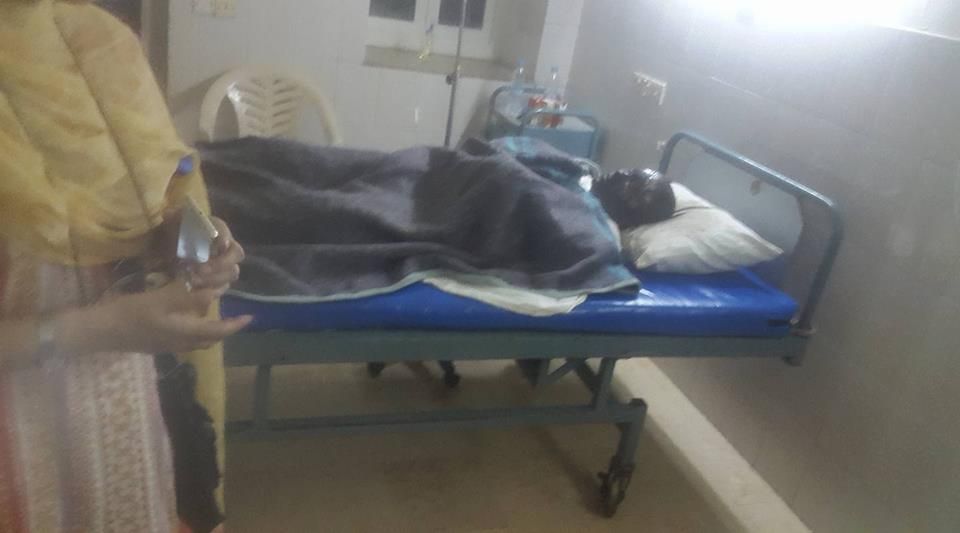 Gaddani is one of the largest Ship Breaking Yards in the World. Located near the industrial city of Hub in Balochistan, bordering Karachi, it supplies twenty five percent of the steel demand of the country.

On Tuesday, 1 November, at around 9.30 in the morning, a blast occurred in an oil tanker at the Gaddani yard resulting in a fire. The fire, rapidly engulfed the whole ship. The more than two hundred workers who were working on the ship were caught in the fire. Some tried to save their lives by jumping in the sea while others ran franticly. So far 21 dead bodies have been recovered, while 70 people have been injured. 15 of these are in a critical condition with hundred percent burns. 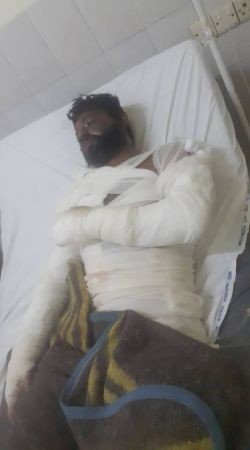 Eyewitnesses have told the comrades of Worker Nama that more than 150 workers were trapped inside the ship and couldn't get out. The fire on the ship was out of control for three days and was only extinguished on the fourth day. However, the rescue operations have not been able to start yet, due to heat emanating from the ship. 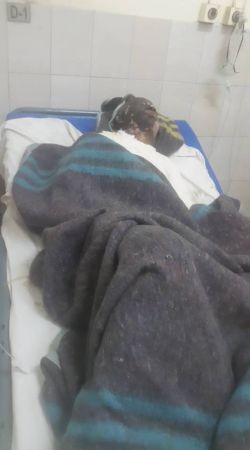 Workers in Gaddani have been working in conditions similar to slavery for decades. They owners treat them like insects. When this Japanese Oil tanker was brought to the yard the cutting of the tanker started without completing the cleaning process of the ship. While the workers were cleaning oil in the 40 to 50 feet deep tankers, the gas based cutting process started at the top floor. A spark from this process somehow penetrated the tank and the whole oil tanker burst into flames.The fire then lit the gas cylinders which were being used for cutting. The blasts from these were throwing the workers into the air. The explosion was so huge, that the roofs and windows of nearby buildings were broken. The up to two inches thick steel walls of the ship couldn't withstand the blast and big parts of the ship were flying into the air. 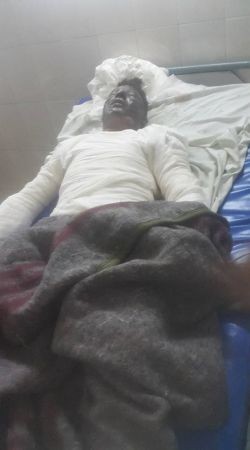 Many bodies were floating in the sea after desperate workers, having already caught fire, had to jump out of the ship. It was a horrible scene with dozens of workers on fire walking around with no first aid equipment to treat them. Many casualties could have been prevented just by the provision of first aid. This clearly exposes the safety conditions and implementation of labor laws at the yard.

The callous response of the government authorities have also been seen as usual. The government and its crony media are under reporting the deaths, to avoid a public outrage. Media outlets have reported 17 deaths and 50 injured while claiming that hundreds of workers are missing. They do not dare to tell the public that the bodies of these "missing" workers will never be found - they have been turned into ashes by the fire. No government department has got the record of workers working inside the ship. In fact, the authorities have not disclosed the records of the company which owned the ship as it would expose their crimes. A minister of the Balochistan government remarked in the Assembly that the government has no authority over this area where ship owners rule.

The customs authorities have denied clearing any such ship and have said that it might be an Indian conspiracy of sending an oil tanker to invade Pakistan. Every department is putting the blame on another to save its own skin.

According to a report on BBC Urdu Federal Minister for Ports and Shipping Hasil Bizinjo, who is also leader of a Baloch nationalist party, said that “this area is under the Balochistan Development Authority (BDA), so I am not responsible for this.” However, Chairman of BDA Shoaib Gola shifted the blame again, saying that a No Objection Certificate from the Environment department is required before starting the cutting of the ship. The Director General of Environment said that they had not issued any NOC for this Ship. The chairman of the Ship owners Association, Dewan Rizwan Farooq, said that there was no oil on the ship. While the Deputy Commissioner of the area said that the ship had 11,000 ton of refined oil while 2,000 ton of crude oil. The arrested contractor of the ship Farooq Bengali says that there were around 85 people working on the ship which, is far less than the actual number. The title of this BBC report says that "responsible for this incident and number of workers at work can't be established".

The number of "missing" workers can only be established by the complaints of their relatives who came there to search their dear ones, but who couldn't find them. In fact the majority of workers at Gaddani are brought in from distant and remote parts of the country after paying $200-300 to their family. These families are often indebted to local landowners or the like and this "huge" amount in one installment helps them to reduce their misery. These workers are then bound to their owners for the whole season. So families of many "missing" workers don't even know what has happened to their fathers, brothers or sons.

The wages for the 20,000 strong workforce here in Gaddani are miserable. Unskilled cleaning workers are paid $4 or $5 per day, working 12 or more hours per day. Skilled workers like cutters received around $10, for 12 or more hours per day. These are much less than the miserable  government defined minimum wage levels. Most of these workers live in wooden makeshift huts near the yard with 8 or 10 workers at a time are packed into small rooms. No labor laws or safety standards are observed and the workers are working with their bare hands, bare footed and with loosely fitted clothes. The workers have to work in damp tanks of up to 50 feet in depth without any monitoring or oxygen surrounded by hazardous gases. Many faint while working and lay on the ground unconscious, no one helps them until they get up with their own efforts and restart work. There is no light inside the tanks and have to continue working when it gets dark. Only supervisors have small lights with which they can check whether the workers are working or sitting idle. Deaths at the workplace are very common and have become a routine. The conditions are so horrible that when a worker is seriously injured, his colleagues demand death grants from the owners rather than asking for health facility. There is no proper health facility nearby and the victims of this incident were sent to Civil Hospital in Karachi tens of miles away. Not a single court case had ever been registered against any of the owners or contractors, before this incident.

For some years some workers have been trying to organize themselves around the Mazdoor Union. Bashir Mehmoodani, the leader of this union, speaking to Worker Nama, said that a yellow union backed by the contractors has prevented workers from joining them his union. He said that when he registered his union in 2009 he and his fellow workers were severely beaten by the local police in a protest. Since then they have been facing the wrath of the labor department and the police. Just two days before the incident a protest was organized by his union and the National Trade Union Federation (NTUF) for the implementation of safety, but no one took notice.

After this incident there was fury and rage amongst the workers. The comrades of the IMT in coordination with the Mazdoor Union and NTUF have organized a protest against the authorities. A large number of the workers have joined this protest and have raised slogans against the draconian policies of the state and ship owners. After this protest, a case was registered against the yard owner, Abdul Ghafoor Kamboh, and his contractor. Also, fire brigades and ambulances suddenly started arriving at the scene in big numbers. But all these fire brigades were not able to extinguish the fire as they lacked necessary equipment to handle the situation. A helicopter was also brought to throw extinguishing chemicals on the fire, but due to heavy smoke it couldn't do much.

Four years ago a similar fire happened in a factory in Baldia Town, Karachi in which nearly three hundred workers were burned to death and many more injured. The actual number of the casualties was  also under reported then. But no one has been punished for the atrocity. Due to the policies of the government, these incidents have become a routine. Last year roof of a factory in Sundar in Lahore collapsed killing a large number of workers. Workers had been complaining about the dilapidated condition of the building, they were still forced to work there while a new floor was built on that roof.

After the most recent incident, many calls are coming from the authorities to investigate the causes of the incident, but this is just for show - nothing will be solved. The chief Minister of Balochistan, who visited Gaddani today was responsible for baton charging a protest of Young doctors in Quetta a few months ago. In that incident, one doctor nearly lost his eyesight. The Prime Minister of Pakistan is also the most famous steel industrialist of the country. His industries are notorious for throwing workers into steel melting furnaces if they demand pay raises or any other improvement of working condition. In such conditions what can be expected from these rulers? Nawaz Sharif in his previous tenure as Prime Minister banned labor inspection of industries in the whole country. Similar policies have been pursued by other governments whether military or "democratic". The ILO and other international organizations have ignored the draconian work conditions in the country. Now the government, on the dictates of IMF, is privatizing other sectors which will mean sending those public sector workers with relatively better working conditions towards the same conditions faced by workers of Gaddani.

The only way forward is to organize the workers of all sectors in Pakistan and the whole world to overthrow Capitalism which is the root cause of all these problems. The comrades of IMT are organizing a public meeting on Sunday near Gaddani to commemorate the 99th anniversary of the Bolshevik Revolution. This meeting will not only discuss the reasons of this incident, but also the strategy to cope with this situation, the treatment of the victims and the compensation for their families.  The Red Workers Front will also organize protests on this incident in other cities across the country. Most importantly we will continue the struggle for workers’ rights. The only revenge for this mass murder, is a socialist revolution in this country and beyond.