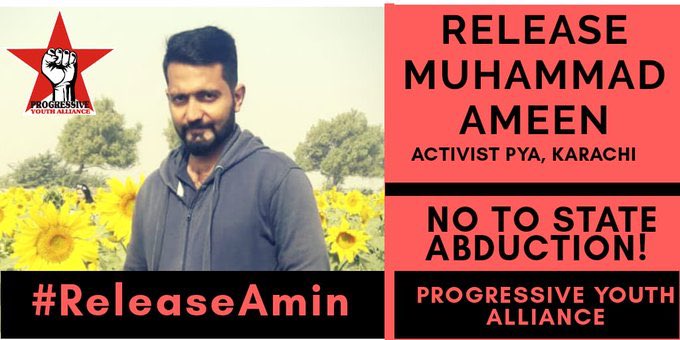 As the economic crisis in Pakistan heads for a catastrophe, with millions being thrown into extreme poverty and death due to hunger and deprivation, state repression is also reaching unprecedented levels. Every avenue for expressing dissent and anger is being strangled. Progressive Youth Alliance activist, Comrade Amin, is one of many people abducted by the brutal state. Release Amin!

In Pakistan, all infrastructure, including the health sector, is collapsing at a rapid speed and even the graveyards have become overcrowded, especially in big cities. Millions are being thrown out of their jobs, while the black market for essential items like wheat flour, sugar, fuel and others have reached levels never seen before. In this orgy of loot and plunder, the ruling class is ruthlessly using every means to amass huge wealth for themselves. They have exploited every means to fleece the poor and downtrodden, including increased taxation, devaluation of the currency, price hikes, ending pensions for the elderly, privatisation, sacking tens of thousands of government employees and enacting huge wage cuts for already heavily underpaid workers. Meanwhile, huge subsidies, special packages and tax holidays for the corporate sectors are being handed out at massive scale.

In this scenario, all outlets for expressing anger and dissent are being crushed. The ruling class, supported by the American imperialism and financial institutions like the IMF and World Bank, is curbing electronic, print and social media, and all kinds of political activity. Anyone who tries to organise protests against price hikes, unemployment or for free healthcare and education is threatened by the security forces and secret agencies of the state, or is implicated under false charges and tortured in custody. The courts and all other institutions of the state, including parliament and all the political parties, have become meaningless for the masses and are directly involved in this orgy of loot and plunder.

The abduction of Comrade Amin

One clear example of the state of affairs is the plight of Comrade Amin: an active member of the Progressive Youth Alliance, who was abducted from his home in the Shah Faisal Colony in Karachi by the Rangers (a paramilitary force in Pakistan) on 14 July, and no one knows his whereabouts.

At 2 a.m., his home was attacked by dozens of Rangers who forcefully entered the premises without any warrant or legal permission. They threatened his sister Sairo Bano (also a member of the PYA) and his mother with dire consequences, abducted him and went away. The family asked about the charges against him and any other reason for this attack, but they were not given any answers. Rather, the whole home was searched and the family manhandled.

Later, the family of Amin approached the police, but the local station refused to register their complaint, nor would they tell about the whereabouts of Amin. Due to this situation, his mother is in a critical condition. The family has also submitted an application of Habeas Corpus in the High Court after fulfilling all requirements, but the court has also delayed the matter, usually considered urgent in legal terms, and the date of hearing has been set now for 7 August.

The lives of Amin and many others who have been abducted in different parts of the country are hanging in balance. In many cases before this, victims of the Rangers have been severely tortured during confinement, while many have lost their lives. Many are also forced to join special political parties supported by the ruling class, or otherwise threatened with implication in severe criminal offences, after which they rot in jail for the rest of their lives.

The recent wave of repression is so widespread that, apart from left-wing activists and political workers, liberals and right-wing activists against the government are also being abducted and tortured. Yesterday, a senior journalist from Islamabad, Matiullah Jan, was abducted by the security forces in broad daylight, a few kilometers away from the parliament house and the building of the Supreme Court of Pakistan in Islamabad. His fellow journalists immediately pursued the case and brought forward the CCTV footage of him being kidnapped by the security agency, which went viral on social media, and there was a general outcry, due to which he was released after 12 hours in custody.

In another incident, Fazal Khan (a human rights activist and a prominent lawyer from Peshawar) survived an assassination attempt near his house. His son was killed by religious fundamentalists in a terrorist attack on a school in Peshawar in 2014 and he has filed many cases and spoken at many public meetings to get the justice done and to get the legal punishment for the killers.

Similar incidents have happened with hundreds of other political activists, human rights workers, journalists, social media influencers and others in all parts of the country; and there is a general atmosphere of intimidation, threat and terror, to crush any effort to express the anger against the loot and plunder of the ruling class.

The repression of oppressed nationalities has also intensified in recent years and the state feels terrified by the rising mass movements from these areas. The bankruptcy of nationalist parties and complete capitulation of its leadership everywhere have also opened up space for debate on revolutionary ideas among these movements, and genuine solidarity on a class basis. This has become unbearable for the state, which has always used nationalist politics for the purposes of divide and rule, and has always poisoned these movements with hatred against other nationalities through nationalist leaders.

The Progressive Youth Alliance has organised many protests across the country against these attacks by the state authorities and is continuing the struggle for free healthcare, education and employment for all. The protests for the release of Amin are being supported by other left-wing organisations and campaigns established to raise their voices for missing persons in Pakistan.

In a protest in front of Karachi Press Club yesterday, a large number of people gathered with the comrades of PYA and raised slogans against the brutality of the Pakistani state. The speakers also condemned these attacks on basic democratic rights in Pakistan and demanded the immediate release of Amin, or to produce him in court if there are any charges against him.

Speakers also said that the failure of the state and all its institutions has become clear and the whole system has become rotten, killing thousands of people in its decay. Heinous crimes like the rape of children and women, relentless killings and mob attacks on religious minorities and many other unimaginable crimes have become a common routine.

The only way forward is a revolution to overthrow this bloodthirsty capitalist system, which has now become a threat to human civilisation, and establish a classless society under a socialist planned economy, which will ensure justice and a peaceful existence for everyone. The struggle for the release of Comrade Amin will also continue, and the protests across the country will be stepped up until he is released or produced in court.

This is a struggle not for one comrade but for the basic right for any human being to live, which is why everyone with even a grain of conscience must participate and support the demand for the release of Amin.