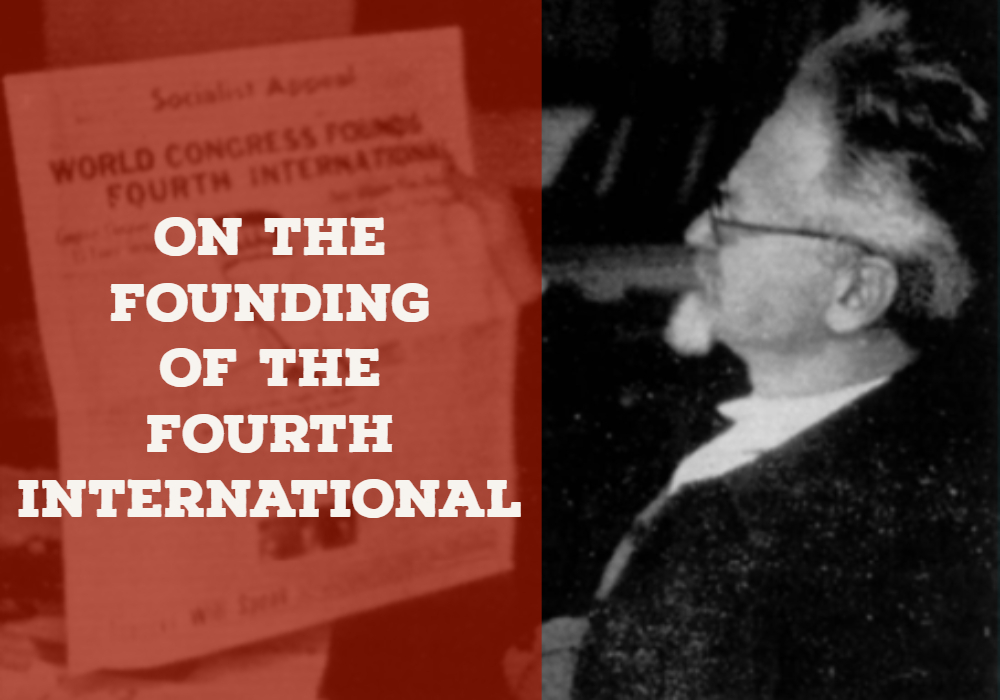 On October 28, 1938 an inspiring mass meeting in New York celebrated the founding of the Fourth International as well as the tenth anniversary of the Trotskyist movement in this country. American imperialism would not permit Trotsky to be present at that memorable celebration. But an electrical transcription of Trotsky’s speech to the meeting helped to bring him closer.

Trotsky never wasted words; the celebration became for him the occasion to press home two fundamental thoughts. First, the unique nature of the revolutionary party and the relation between the individual and the party: “For a revolutionary to give himself entirely to the party signifies finding himself.” Second, such a party cannot be destroyed by Stalin’s murder gangs: “It is possible to kill individual soldiers of our army, but not to frighten them.” Thus did Trotsky, in advance, armor us against deserters and the GPU – EDITORS of FOURTH INTERNATIONAL

I hope that this time my voice will reach you and that I will be permitted in this way to participate in your double celebration. Both events: the tenth anniversary of our American organization as well as the foundation congress of the Fourth International deserve the attention of the workers incomparably more than the war-like gestures of the totalitarian chiefs, the diplomatic intrigues, or the pacifist congresses.

Both events will enter history as important milestones. No one has now the right to doubt that.

It is necessary to remark that the birth of the American group of Bolshevik-Leninists, thanks to the courageous initiative of Comrades Cannon, Shachtman, and Abern, didn’t stand alone. It approximately coincided with the beginning of the systematic international work of the Left Opposition. It is true that the Left Opposition arose in Russia in 1923, but regular work on an international scale began with the Sixth Congress of the Comintern.

Without a personal meeting we reached an agreement with the American pioneers of the Fourth International, before all, on the criticism of the program of the Communist International. Then, in 1928, began that collective work which after ten years led to the elaboration of our own program recently adopted by our International Conference. We have the right to say that the work of this decade was not only persistent and patient, but also honest. The Bolshevik-Leninists, the international pioneers, our comrades across the world, searched the way of the revolution as genuine Marxists, not in their feelings and wishes, but in the analysis of the objective march of events. Above all were we guided by the preoccupation not to deceive others nor ourselves. We searched seriously and honestly. And some important things were found by us. The events confirmed our analysis as well as our prognosis. Nobody can deny it. Now it is necessary that we remain true to ourselves and to our program. It is not easy to do so. The tasks are tremendous, the enemies – innumerable. We have the right to spend our time and our attention on the jubilee celebration only insofar as from the lessons of the past we can prepare ourselves for the future.

The Party Is Everything

Dear friends, we are not a party as other parties. Our ambition is not only to have more members, more papers, more money in the treasury, more deputies. All that is necessary, but only as a means. Our aim is the full material and spiritual liberation of the toilers and exploited through the socialist revolution. Nobody will prepare it and nobody will guide it but ourselves. The old Internationals - the Second, the Third, that of Amsterdam, we will add to them also the London Bureau are rotten through and through.

The great events which rush upon mankind will not leave of these outlived organizations one stone upon another. Only the Fourth International looks with confidence at the future. It is the world party of Socialist Revolution! There never was a greater task on the earth. Upon every one of us rests a tremendous historical responsibility.

Our party demands each of us, totally and completely. Let the philistines hunt their own individuality in empty space. For a revolutionary to give himself entirely to the party signifies finding himself.

Yes, our party takes each one of us wholly. But in return it gives to every one of us the highest happiness: the consciousness that one participates in the building of a better future, that one carries on his shoulders a particle of the fate of mankind, and that one’s life will not have been lived in vain.

We aren’t a party as other parties. It is not in vain that the imperialist reaction persecutes us madly, following furiously at our heals. The assassins at its services are the agents of the Moscow Bonapartistic clique. Our young International already knows many victims. In the Soviet Union they number by thousands. In Spain by dozens. In other countries by units. With gratitude and love we remember them all in these moments. Their spirits continue to fight in our ranks.

The hangmen think in their obtuseness and cynicism that it is possible to frighten us. They err! Under blows we become stronger. The bestial politics of Stalin are only politics of despair. It is possible to kill individual soldiers of our army, but not to frighten them. Friends, we will repeat again in this day of celebration ... IT IS NOT POSSIBLE TO FRIGHTEN US.

Ten years were necessary for the Kremlin clique in order to strangle the Bolshevik party and to transform the first Workers’ State into a sinister caricature. Ten years were necessary for the Third International in order to stamp into the mire their own program and to transform themselves into a stinking cadaver. Ten years! Only ten years! Permit me to finish with a prediction: During the next ten years the program of the Fourth International will become the guide of millions and these revolutionary millions will know how to storm earth and heaven.

1. When originally published in Socialist Appeal the article had this introduction: “Following is the text of the electrically transcribed speech delivered by Leon Trotsky to the mass meeting held in New York on Oct. 28 to celebrate the founding of the Fourth International and the tenth anniversary of the Trotskyist movement in this country.”