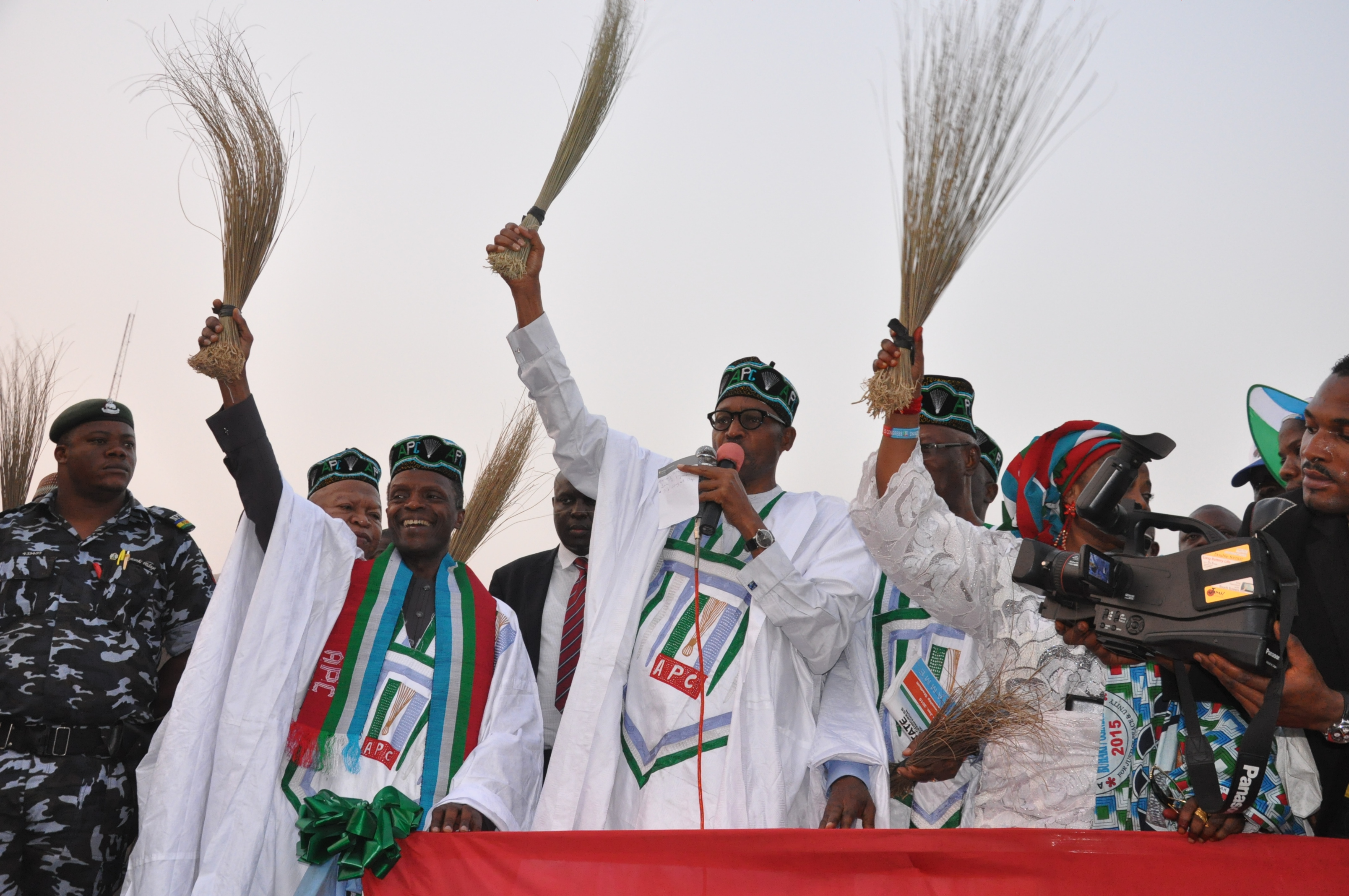 After sixteen years in power, the PDP has finally been removed by the Nigerian masses. This is a direct consequence of the mass movement that erupted in January 2012. Buhari has been elected by enthusiastic masses in the hope that he will provide real change. But his programme remains one of continuation of privatisations and sell-offs. It will not be long before the Nigerian masses realise this from their own living experience.

“Civilian alongside military and policemen took to the streets of Yobe state on Tuesday to celebrate the victory of Gen. Muhammadu Buhari of the All Progressive Congress (APC) in last Saturday’s polls.

“Our correspondent reports that hundreds of cars including those of security agents occupied major roads of Damaturu with their full headlights on celebrating the victory.

“Operators of Tricycles machine popularly called Keke Napep were tooting horns and chanting victory songs such "Buhari Ikon Allah!" meaning Buhari is the will of God.

“Parents and children in the Internally Displaced Persons (IDPs) camps in Damaturu were seen drumming, dancing and chanting "Sai Baba muke so" meaning its Baba (Buhari) we are yearning for. People who thronged the street were given free drinks by shop keepers. Also, truckloads of soldiers and policemen stormed major streets in Keffi, Nasarawa state holding the town spellbound with celebrations of Buhari’s victory. The soldiers first rode into town and were joined by policemen with commercial motorcycle riders trailing them.

“The soldiers came from the 77 Brigade of Guards Battalion from Kaduna Road, and connected Abuja Road, and Akwanga Road between 6:30 and past 7pm. The policemen left the police station at Angwan Rimi area, and linked Akwanga Road, in two trucks. Both soldiers and policemen yelled victory songs as they drove through the various parts of the metropolis, while jubilant youth who trailed along screamed change!, a popular pro-Buhari campaign slogan. 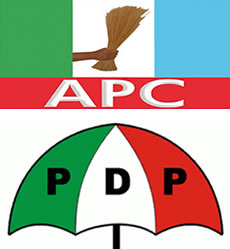 This gives a graphic account of the mood of the majority, not only in the North Eastern part of the country, which insurgents have been ravaging, but also in the North West and a few other street jubilations here and there in the rest of the country following the announcement of the results of the presidential election held on 28th March, 2015.

How could it be otherwise, after 16 years of agony and intense suffering of the Nigerian masses under PDP rule? Under this rule we have seen mutinous soldiers in which eighteen of them are already awaiting execution after a kangaroo military tribunal sentenced them. They are being punished simply for requesting proper funding and adequate welfare, and for standing up against the extremely corrupt military establishment. For the rank and file soliders the emergence of General Buhari means freedom for their incarcerated colleagues.

The general election and the 2012 mass movement

Former President Goodluck Ebele JonathanThis general election definitely has its roots in the January 2012 mass movement which almost uprooted this outgoing PDP government of Goodluck Jonathan, had it not been for the compromise of the reformist labour leadership. It is not accidental that the outgoing regime lost in this general election mainly in those regions where the 2012 protest was strongest.

The mass protest shook the South West and the Northern regions much more than anywhere else. In actual fact, the movement was very limited in the South East and South South regions of the country.

This result pattern will not surprise anyone who can see the link between the January 2012 mass movement and this general election. This is also a confirmation of what Lenin once said that “Politics is a concentrated economics”. The 2012 mass movement took off from where the Egyptian revolution reached and borrowed slogans and enthusiasm from the heroic Egyptian uprising. This alarmed the Nigerian Ruling Elite, and the most far-sighted among them, in alliance with their imperialist masters, quickly put up the APC deceit to direct the growing anger towards a safe haven.

The masses have gone from the extreme anger in January 2012 to extreme jubilation in March 2015, despite the fact that nothing significant has actually changed, no thanks to the comprising Labour Leadership which deliberately refused to provide a genuine alternative.

The PDP regime’s failed attempt to scuttle the election process

It was already abundantly clear in the very early stages of the election process that the outgoing regime would be defeated. All the brilliant and active minds in society had already turned their backs on the regime, but it refused to honourably surrender without a serious fight.

Sensing defeat, the Jonathan regime shifted the election date by six weeks, hoping the tide would change  in that period, but all was in vain. He planned to institute an Interim Government to handover to, but this was exposed and scuttled. He intimidated the chairman of the electoral commission and threatened to sack him, but all this cheapl manoeuvring failed. It was a case of a snake with its head already cut-off, which was just struggling to live.

The tiny straw that finally broke the camel's back was dropped during the final collation of the result, when the PDP agent stood up at the collation centre and started inciting ethnic sentiment against the Chairman of the Electoral Commission. He made an effort to disrupt the proceedings and made a nuisance, of himself, as the last struggle of a drowning man.

Obama, Cameron and many other imperialist masters must have been alarmed by this public show on national and international television and must have put a call to the regime and directed it to immediately concede to Buhari and congratulate him so as to douse the tensions. As an imperialist puppet, Goodluck immediately did so, even before the election was finally collated and before the winner had been officially announced. The tensions in society, which were already close to boiling point as a result of the arrogant behaviour of these criminals, all of a sudden calmed down after the phone conversation between these “gladiators”. Suddenly, the villain Jonathan became the “honourable statesman” of Mandela status overnight.

Bond yields down and stocks up 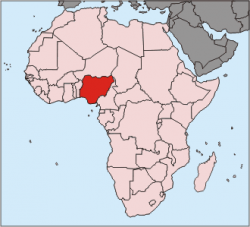 The fact that the stock market surged is a clear indication that the bourgeois believe that Buhari can manage the system for them better than Goodluck.

“Nigerian stocks surged the most since March 2010, leading gains among world equity markets, after former military ruler Muhammadu Buhari won a vote marking the first peaceful shift in power since the end of colonial rule in 1960.

“The Nigerian Stock Exchange All Share Index rose for a ninth day to extend its longest streak of gains since December 2012. The West African nation’s $500 million of Eurobonds due July 2023 advanced for the 11th day, pushing the yield down to the lowest since Dec. 8, as President Goodluck Jonathan conceded defeat, reducing the threat of post-election violence that marred previous votes.

“'The political risk has certainly decreased,' Thabo Ncalo, a money manager at Stanlib Asset Management Ltd., which oversees about $45 billion and has been adding to its Nigerian holdings, said by phone from Johannesburg. 'It bodes well for investing in Nigeria. It boosts the case for coming back into the country'.”  (see full article here)

The Naira also rose by 7% against dollar. But this rebounding is like a last minute breath of a dying man, it is artificial without any significant force pushing it forward. It is based on so-called “confidence” and not on the real state of the Nigerian economy.

APC Government, the rising hope and the gathering storm

The hopes of the masses are now high, and expectations are immense. Internally Displaced Persons in the North East strongly wish to go back home as quickly as possible. The millions of unemployed Nigerian youths are already at breaking point and urgently need jobs; workers want a minimum wage that will lift them from the poverty level they are currently in; Nigerian students and their poor parents desperately desire free and quality education, decent housing and truly vibrant health systems, stable electricity with modern infrastructure.

The incoming APC government has to meet all these expectations as it has already promised. It has to meet them in the midst of falling revenues and a battered economy that has thrived mainly on the back of huge corruption and the black economy for decades.

None of the legitimate demands of the working people can be met as quickly as needed, when the lion's share of the national resources still remains in the hands of an extremely small elite minority. For as long as production and distribution of cement and other building materials remain in the hands of Dangote and his likes, housing for all is a mere pipedream. The value of the Naira will remain epileptic for as long as the banks and other financial institutions remain in the hands of currency speculators who are the bankers. Without a crash direct-public-works programme, unemployment will remain very high. Aprivatized power sector will continue to mean lack of electricity, since the so called private investors will always place profit well above production and fair distribution of this essential service. How much will be adjudged an affordable level of school fees for Nigerian students when 70% of Nigerians live on less than $1 dollar a day that cannot afford daily 3 square meals, if not free with reasonable bursary to support the students? How can all these be financed when the lion's share from oil proceeds still go to an extremely small number of rich both locally and internationally?

The coming APC regime has already said it will leave the lion's share of national resources in the hands of the so called private investors. It has publicly informed us that it will proceed with more privatizations and sell-out of our collective properties, that is, theAPC will continue with all the capitalist policies that led to the downfall of PDP after 16years. It means everything has changed while nothing fundamental has actually changed between the outgoing regime and the incoming one.

One thing that is clear is, if it took the PDP 16 long years to be exposed and to implode, the APC will not have the luxury of these long years. It has to rule  with the economy in a much more difficult situation and carry out its policies among a huge population that has already awoken and has tested its power. The implosion of the PDP has successfully replaced itself with a rickety APC so that the status quo can remain. It is now for the working class and the politically rising youth to build a genuine political alternative that will radically transform and change the status quo in a revolutionary manner, from the blood sucking capitalist system to a more human-focused socialist system.