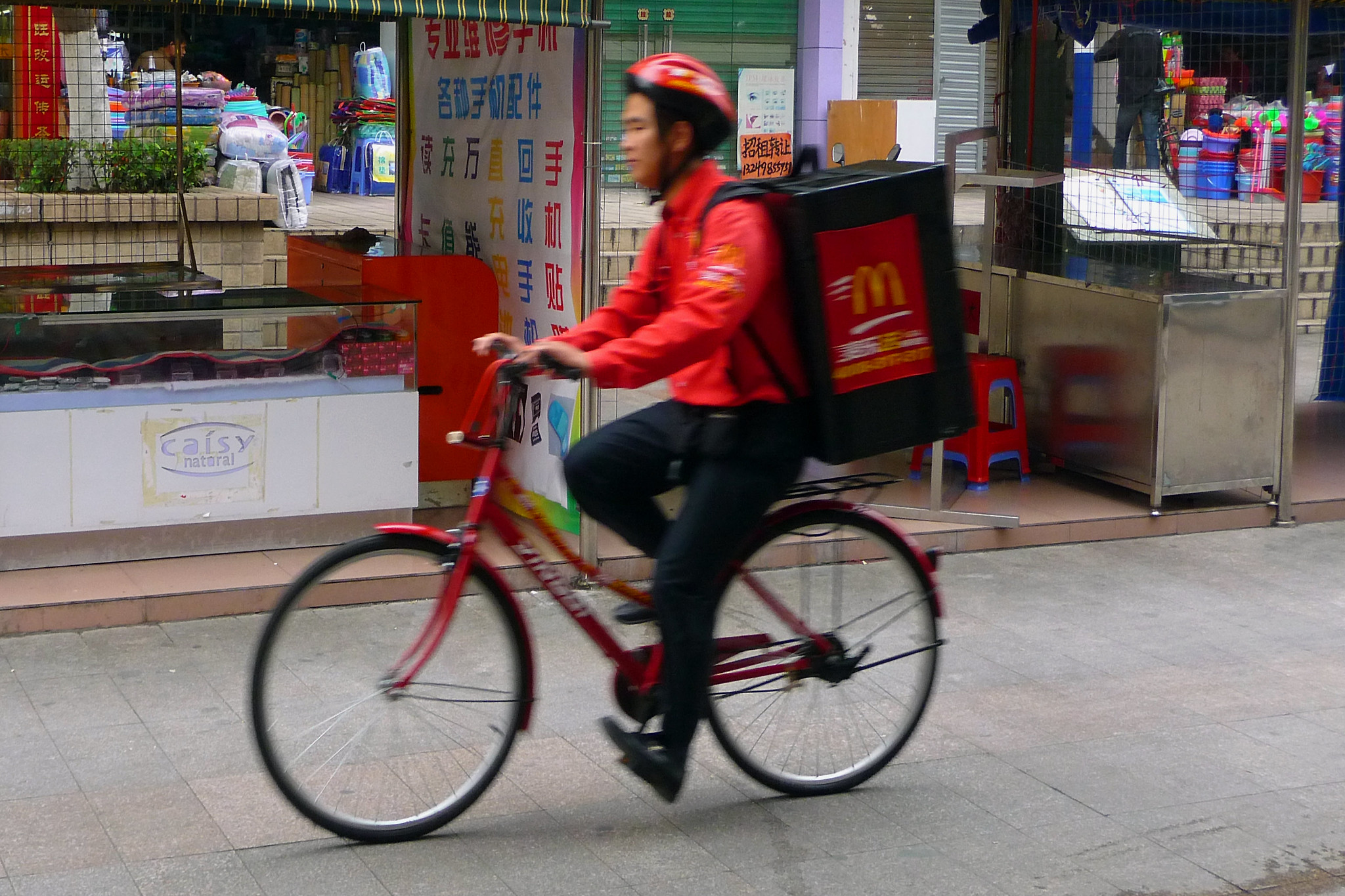 Since the beginning of the COVID-19 pandemic, the global economy has plummeted. Yet while the rest of the world seems to be on fire, China appears to have remained safe from the extreme economic decline, being the one of the few economies to grow in 2020. China registered a 1% increase in GDP due to the Chinese Communist Party’s (CCP) strict lockdown measures and the endeavour of frontline workers. To the outside world, the Chinese state continues to appear strong, proudly brandishing the slogan of ‘Socialism with Chinese Characteristics’.

Behind the facade, however, lies a highly exploitative capitalist economy that is also in crisis. Within China’s borders, workers are still suffering from super-exploitation akin to the levels that English workers experienced in the late 1800s. Their rights are denied, their speeches are censored, their actions are mercilessly repressed. The workers are not taking this lying down, however, and the social contradictions of capitalism and the repressive environment are pushing them to question the whole system.

The development of capitalism in China has created a new generation of workers who have never lived under the previous nationalised planned economy or the disorienting effects of capitalist restoration. The result is a revitalisation of workers’ struggles in the recent period.

A driving force behind the renewal of class consciousness in China is the rapid grow influx of migrant workers (民工, mingongs) into the cities. As capitalism was restored and developed under the CCP’s watch in China, a new mass of the rural population became proletarianised and were forced to find work in the burgeoning urban centres.

This had the effect of replacing the previous generation of workers who were generally confused and demoralised in the aftermath of the Cultural Revolution and by the measures taken by the state during the “Reform and Opening Up” period. The older generation of the urban working class who had lived through the era of the planned economy tended to be compliant and trustful of the CCP administration in the face of the process of capitalist restoration.

Material conditions did indeed improve for this older generation of workers: from 1978 to 1985, the average monthly wage for workers grew from 52 yuan to 119 yuan, an annual increase of 13%. The rise of average wages initially drew these workers’ attention away from the danger of the CCP’s shift towards capitalism, the painful consequences of which they would soon come to feel. 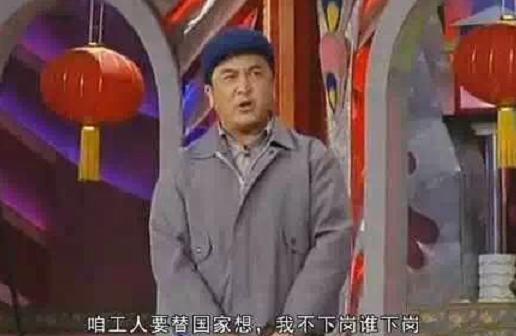 A comedy from the 1999 Spring Festival Gala. The comedian asks ironically, "We workers have to consider the national interest (and take one for the team). If I don't take the layoff, then who would?" / Image: public domain

After Deng Xiaoping’s Southern Tour in 1992, the CCP came firmly under the control of the economic liberalisers, who carried out huge privatisation reforms in the state-owned enterprises (SOE), quickly excluding the older generation of workers from the workplace. Over 22 million workers were laid off within three years between 1998 and 2001. This sparked a massive wave of struggle among the laid-off workers from 2002 to 2005, dying down shortly thereafter.

While the older generation of urban workers were losing their jobs from the SOEs, many peasants – following the introduction of the Household Responsibility System in 1982, which effectively began the privatisation of farmland – began leaving their land voluntarily during the downtime to look for seasonal work in the towns, eventually leaving the countryside altogether for better jobs in the cities.

These workers from rural backgrounds are commonly known as the mingongs. Between 1982 and 1988, around 9.7 million mingongs flocked to the cities every year. After Deng Xiaoping’s Southern Tour in 1992, the population inflow reached over 10 millions mingongs annually migrating to the cities since then. According to the latest figures from the National Bureau of Statistics, the number of mingongs in China as of 2020 was around 280 million. This number compared with 290 million in 2019, marking the first time a decline has been recorded in these numbers.

Today, these mingongs occupy one third of the 900 million working population of China, but the actual number of workers of rural origin is far larger than the 290 million due to changes in household registrations. Legally speaking, mingongs are migrant workers whose household is registered in rural areas. However, in the past decades, many mingongs were allowed to register for an urban household, and were thus no longer counted as mingongs as such, although they may still have a connection with the countryside.

Mingongs today consciously regard themselves as part of the urban working class rather than as separate from them. In an interview from 2006, one mingong from Hunan Province working in Guangdong Province explained:

“Everything in my life is different from that of my parents’ generation. I don’t have any plans to go back to the village to get married and have children there. I am educated and cultured. I want to learn a skill and sink my roots here [in the city].”

A more recent report in 2019 points out that many of these young mingongs are far more skilled and educated than previous generations were.

The super-exploitation and tough life in the cities has rapidly created a class consciousness among mingongs. The majority of the more than 13,000 strikes recorded across China since 2011 have involved largely mingong workforces. Although for a time many thought the cities would bring opportunities and wealth, such illusions in the system are rapidly dissipating, particularly as economic growth has slowed since 2011, and as the new influx of urban workers has become more knowledgeable and skilled. A few decades ago, the mingongs predominantly lacked education: a 2007 research and investigation sampling 897 Nanchang mingongs shows that more than 80% had had an education no higher than middle school (maximum around grade 9, depending on regions). In recent decades, however, millions of mingongs and their families have taken root in the cities, resulting in rapid urbanisation. In 2010, the urbanisation rate was 49.68%. In 2016, the urbanisation rate of China reached 57.35%. As of 2020, 63.89% of the population is regarded as urban. 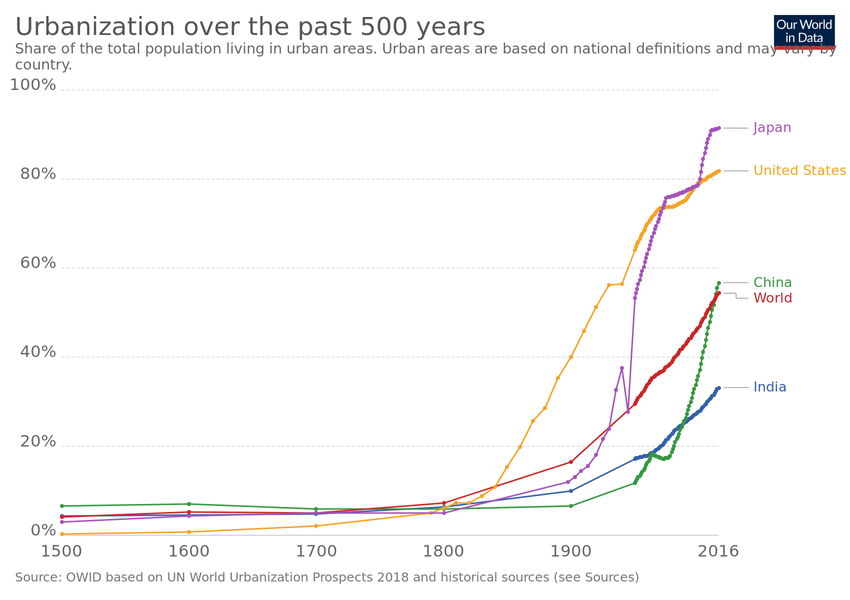 Figures illustrating urbanisation of China / Image: Our World in Data

As the mingongs settled in cities, their way of life has also changed. Young mingongs nowadays usually attempt to avoid working in factories. Ironically, these were the jobs their parents desired. It is reasonable for these young workers to reject the dangerous working conditions and harsh (physical) labour which their parents lived through. Unlike how pro-state media describes service sector jobs, illusions in this sector that such jobs are safer and of higher quality contrast starkly with the reality.

For example, food delivery riders experience intense labour on a daily basis, and therefore there are huge numbers of traffic accidents in the metropolises. Often, companies do not compensate enough or at all for their workers’ injuries – one example being a Beijing rider who experienced sudden death on his shift, and was merely paid 2000 yuan (300 USD) by Ele.me, the company which de facto hired him but which claimed to have no labour relation with him. This job has no advantages over factory work in terms of either wages, labour intensity, or labour rights.

Unlike the older generation of workers, who remember the equal wages and some benefits that were provided by the state, the new working class has been forming in the soil of privatised property relation, free-market competition, and authoritarian repression. As a result, a massive awakening of class consciousness has begun among the most educated and advanced workers in recent years.

This trend has been especially apparent since the “996” and “251” Incident of 2019, in which the class consciousness among the most educated layers of the working class began to be expressed online. Workers berated the mainstream media for their pro-capitalist stances, mocking the ridiculous corporate advertisements, exposing the brutal exploitation they experience, and actively attempting to connect with the physical labourers.

We can see many examples of their efforts: open mockery of Jack Ma after the People’s Billionaire Incident; the Creative Writer’s Strike of 5 May 2020; the spread of the internet meme 打工人 (Da Gongren, used to refer to blue-collar physical workers solely, but now used to refers to all workers); active demands for an eight hour working day. 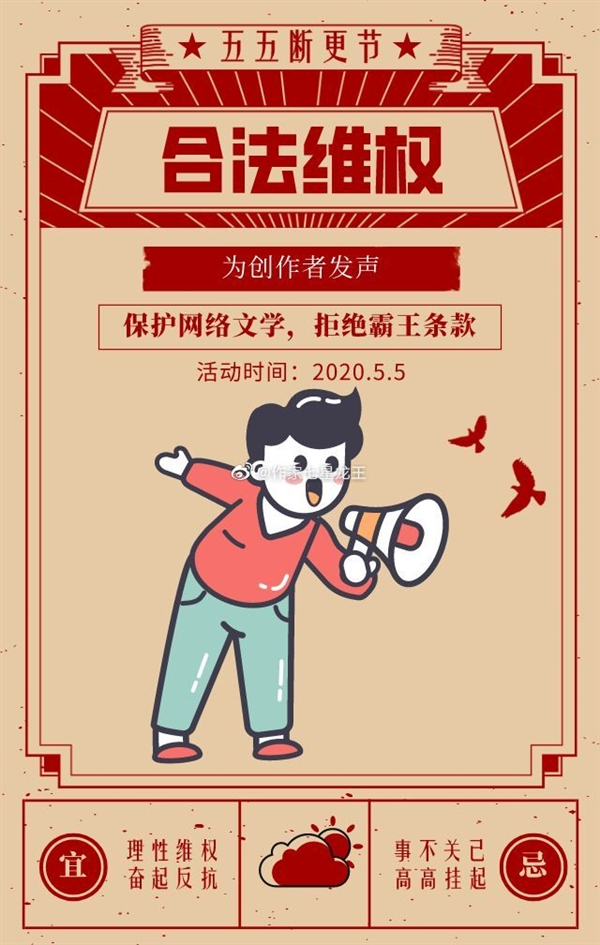 A poster for the 5 May Creative Writers Strike / Image: public domain

This change, however, didn’t fall from a clear blue sky. It is the unavoidable result of capitalism. Prior to this awakening of class consciousness, workers were already experiencing the oppression of their bosses while the state looked on, indifferent to their sufferings. A qualitative change has taken place after years and years of accumulated oppression. At the decisive turning point, even a small spark can ignite the powder keg of ferment.

For example, the 996 working system (working from 9am to 9pm, 6 days a week – i.e. 72 hours a week) has been prevalent in the tech industry since 2016. Resentment towards increasing labour intensity, insufficient wages and unprotected labour rights however have been brewing among these workers. This reached a turning point in 2019 when tech tycoon Jack Ma openly praised the 996 system. This led to a massive online backlash directed at capitalism itself.

The need for Marxist leadership

As Marx and Engels explained: capitalism cannot help but bring its own gravediggers into existence. The restoration of capitalism in China proletarianised millions of people from the countryside and pushed them to find better prospects as workers in the cities, only to leave them bitterly disappointed by more misery, drudgery, and oppression.

Even among those who manage to get themselves an education, instead of stability, they find only precarious jobs and inhumanely long working hours. This is the reason why, despite the incessant bombardment of state propaganda claiming China is a thriving socialist country, a growing layer of workers and youth are recognising this society for what it is: a capitalist one that needs to be overthrown.

As contradictions within Chinese society accumulate and more and more strikes are taking place, new bouts of marvellous and spontaneous struggle will burst onto the surface. These will undoubtedly be carried forward by militants who want to transform society from top to bottom. Despite what many on the left in China believe, spontaneous struggles in and of themself cannot bring about the victory of the working class and the socialist revolution.

China is a country of 9.6 million square kilometers, with a population of 1.4 billion and about 900 million workers. This only increases the likelihood that spontaneous outburst of struggle will take on an isolated character. As the workers spring into struggle, they will also be met by an extremely centralised, well-resourced, and disciplined state apparatus with an omnipresent surveillance network.

A leadership that helps connect the struggles all over China is therefore necessary in order to assure victory and allow the Chinese workers to genuinely take charge of society. This leadership can only be forged by building a party of the Marxists with an internationalist perspective.