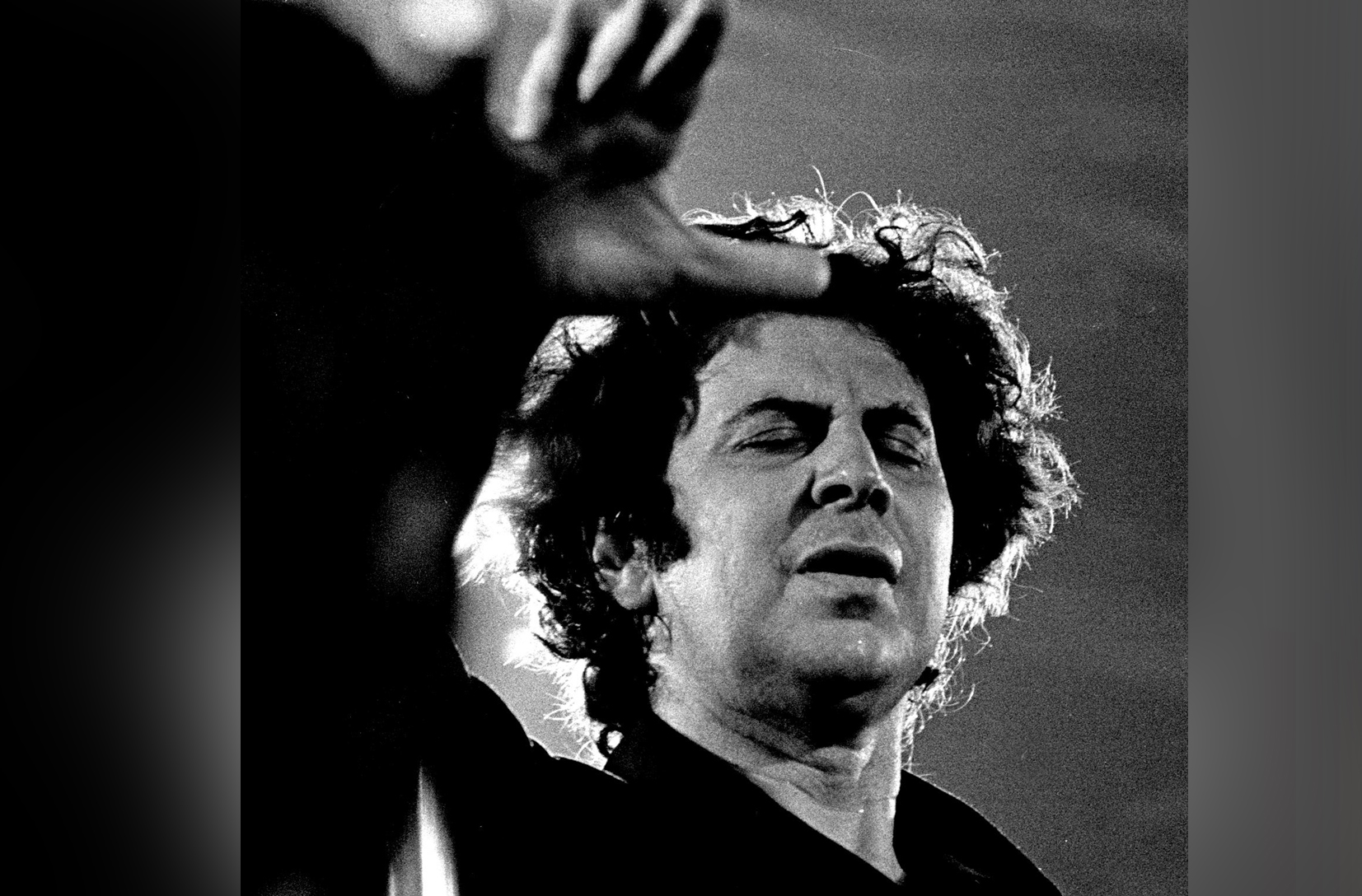 World music and the class struggle for democratic rights have both lost an important figure, Mikis Theodorakis, the much-loved composer of the Greek people. Mikis Theodorakis dedicated his life to the musical rebirth of post-war Greece. His musical compositions combined an incredible artistic prowess with a remarkable expression of the Greek working class’ mood, aspirations and struggles against poverty and oppression.

Mikis was a fighter for the liberation of Greek peoples in EAM (Greece’s National Liberation Font) and ELAS (The Greek People's Liberation Army). During the years of Nazi Occupation, he became a member of the KKE (Communist Party), and later a leading figure of the left in post-war Greece. He fought in the frontlines against the authoritarian regimes imposed on Greece by the ruling class and its allies, and against the Regime of the Colonels in particular. In those dark years of the Greek junta, Mikis became a symbol of resistance through his music and organising.

Theodorakis made multiple political errors as a leading figure on the left, reflecting the political mistakes of Greek Stalinism in general. Perhaps the most shocking of these was his short-lived role as an MP of the New Democracy (ND) party, and minister in the ND government of the early 1990s; and his more recent nationalist approach to the question of Macedonia. Despite this, he lives on for the Greek workers as a tremendous artist and a democratic advocate whose struggles will forever be engraved in their collective memory.

His musical and political journey

Michael (Mikis) Theodorakis was born on 29 July 1925 in Chios. His parents, George Theodorakis from Crete and Aspasia Poulaki from Çeşme, met in Asia Minor shortly before the Burning of Smyrna. He spent his childhood in Mytilene, Ioannina, Argostolion, Pyrgos, Patras, and Tripoli due to his father’s frequent transfers during his job as a civil servant. At 17, he appeared in his first concert in Tripoli where he performed his first symphony, Kassiani. He went on to study music in Athens and Paris, and composed pieces based on the greatest poets of the left, including Pablo Neruda, Federico Garcia Lorca, Odysseas Elytis and Yiannis Ritsos among others.

In 1943 he was recruited to the youth of EAM, the EPON (United Panhellenic Organization of Youth) and later to the KKE. He was arrested and tortured by Italian fascists during the Battle of Fardykambos on 25 March 1943. He became an active agitator and assumed the role of “cultural” secretary of EPON in 1944. He joined ELAS, the army of EAM in the same year and participated in the uprising in December 1944 (the “Dekemvriana”) while still a student of the Athens Conservatoire.

Following the Dekemvriana, he was persecuted and moved to Athens where he lived illegally. In 1945, he was arrested for the first time. He founded the Panhellenic Music Association in the same year. He was arrested again in 1947 and this time exiled to Ikaria. In 1948 he was transferred to Makronisos and was released in August 1949. He spent the rest of his army service in Alexandroupoli, Athens and Chania. In 1950, whilst in the army and living under a regime of extreme terror, Theodorakis attempted suicide.

He emigrated to Paris in 1954, where he studied at Paris Conservatoire on a scholarship until 1957 and composed three ballets: Antigone, The Lovers of Teruel, and Le feu aux poudres, all of which met with great success in Paris and London. Oedipus Tyrannos was written in the same year. In 1957 Theodorakis’s Concerto for Piano and Orchestra won the gold medal in Moscow’s festival, becoming the successor of Shostakovich. He returned to Greece in 1960. In September of the same year, he first recorded Epitaph, where he united folk music and Greek poetry through the verse of Yiannis Ritsos. In the same year, he set to music Axion Esti by Odysseas Elytis and Epiphania by George Seferis. He founded the “Small Symphony Orchestra of Athens” and gave many concerts with the purpose of democratising symphonic music for the Greek masses.

In 1962 he travelled to Cuba where he met Fidel Castro and Che Guevara and participated in the nascent radio station of the Cuban Revolution. He also set to music Tasos Livaditi’s poem Che The Saint – a composition titled Liturgy No 2: To children, killed in War.

In 1963, Theodorakis founded the Lambrakis Democratic Youth, of which he was president for three years from 1964. He was arrested again in 1963 for his involvement in the first Greek Marathon Peace March. In 1964 he was first elected as a deputy of EDA (United Democratic Left) in the Piraeus B constituency, and in 1965 he joined the Executive Committee.

In 1967, the military junta banned any performance and selling of Mikis Theodorakis’ music. In the same year, he aided the funding of a left resistance group known as PAM (Panhellenic Anti-dictatorial Font), where his activity got him sentenced and tried by the military court. He was imprisoned in the detention centre at Bouboulinas Street, and then in the Averoff prison, where he undertook a long hunger strike. He and his family were deported to Zatouna, Arcadia, and finally transferred to a camp in Oropos, Attika.

When his health deteriorated in Oropos, a wave of protests broke out internationally. At the camp, he remained independent of the fractured forces of the Communist Party, which had split in 1968. As such, he came into conflict with the leadership who isolated him despite his health. When his proposal for an attempt at mass resistance involving the thousands of prisoners at the camp was rejected by the KKE, something which would have surely attracted international attention, Theodorakis came out publicly in a statement against the KKE’s policy.

In 1970, under the pressure of international solidarity and with the support of many renowned artists such as Arthur Miller and Dmitri Shostakovich, the dictatorship allowed him to move to Paris. There he chose to work with the KKE Interior (the ‘euro-communist’ split away from the Communist Party). He joined their offices in the same year and became president of the PAM.

In 1971, Mikis Theodorakis visited Israel to present The Ballad of Mauthausen. Shortly afterwards, he visited the Palestinian base in Beirut to present the Arabic translation of his autobiography, entitled The Debt (“To Chreos”), at a time when he was already known for his music and anti-dictatorship struggle internationally. There, he defended the Arab movement in favour of solidarity with the pro-peace movement among Israelis.

In 1972 he founded the political movement “New Greek Left” and co-founded the “National Resistance Council”. He performed in Israel a second time and met with the Vice President who asked him to convey a message to Arafat.

During the first elections of The Metapolitefsi (“regime change”) in 1974, he ran as a candidate of the United Left (an electoral alliance of KKE and KKE Interior) in Piraeus B but failed to get elected. In 1975, he was re-elected as a member of the Executive Committee of EDA.

In 1978 he ran in the Athens mayoral election, supported by the KKE. He received 59,428 votes (16.32%), coming third behind the New Democracy candidate who came second, and the PASOK candidate (Dimitris Beis) who came first. In 1979, he became a founding member of the Movement for Left Unity (KEA). In 1981 he ran with the KKE again and was elected MP in Piraeus B, receiving 13,785 votes. He came first among 10 candidates and won the only party seat in the region.

In 1981, he went back to Cuba, where he gave a historic concert in front of Havana Cathedral. Fidel Castro, who by this point was a friend of his, congratulated and embraced him with warm enthusiasm.

In 1981, the leader of the Palestine Liberation Organization (PLO), Yasser Arafat, visited Greece. During his stay, he met Theodorakis, who was at this time an MP, and asked him to compose an anthem for the PLO, which would be proposed as the official anthem of the Palestinian State once the goal of achieving such a state had been achieved! At the beginning of 1982, Mikis Theodorakis accepted Arafat’s invitation and visited Beirut as a guest of the Lebanese Minister of Culture and of the PLO to present the anthem. The latter was ratified by the Palestinian Parliament, with Arafat and Palestinian lawmakers giving a standing ovation.

The end of 1982 was marked by the invasion of Beirut by Israel and the massacre of Palestinian and Lebanese civilians. Mikis Theodorakis was invited to Beirut by Arafat through the General Secretary of the KKE, Charilaos Florakis, in order to support the Palestinian struggle and lift the spirits of the Palestinian, Lebanese and Syrian masses. Eventually he went to Damascus and held a show in a packed out theatre.

In 1983 he was awarded the Lenin Peace Prize. He was re-elected as a KKE deputy in 1985, this time coming first in the ballot. In 1987 he helped found the Greek-Turkish Friendship Committee. Together with the director Theodoros Angelopoulos, he was a founding member of the European Film Academy in April 1989.

The year 1989 marked a sad turn to the right in Theodorakis’ politics, reflecting the growing mood of demoralisation and frustration with the actions of PASOK governments nationally, and the general reaction caused by the crisis in the USSR and the states of the Stalinist Eastern block internationally. In the same year, Mikis Theodorakis wrote an introduction to a new biography of Konstantinos Mitsotakis, the reactionary New Democracy leader and father of the present ND Prime Minister, Kyriakos Mitsotakis. He was later included on the New Democracy list for the parliamentary elections in November 1989. Until the election of April 1990, he would remain an independent MP of the centre-right party. Following those elections, he would become a minister for two and a half years. On 30 March 1992, he resigned, but at the same time declared his support for the Mitsotakis government and that he would continue collaborating with this government as an independent MP.

On 12 October 1992, he declared his independence in Parliament, ending cooperation with the ND parliamentary group, but at the same time reiterating his support for the Mitsotakis government’s policy. On 9 March 1993, he resigned as an MP and took over as general manager of the ERT’s music programming. In March 1994, he resigned as general manager of ERT’s ensembles, denouncing the new PASOK government and the general management of ERT for “attempting to kill the organisation by the method of suffocation.” Nevertheless, in June 1996 he was appointed by the PASOK government to the National Tourism Council.

At the beginning of the stormy period of the crisis and the memoranda, in December 2010, Mikis Theodorakis took a progressive anti-memorandum stance. He announced the establishment of a “patriotic anti-memorandum organisation”, the Independent Citizens’ Movement known as “Spitha”. He actively participated in the mass rallies of the 2011 anti-memorandum Indignant Citizens Movement. In September 2013 he decided to leave “Spitha”. In 2015, he initially embraced the new SYRIZA government, but harshly criticised it later. In honour of his popular, democratic struggles, in the historic referendum of 5 July  2015, he publicly voted "NO".

The latest samples of Mikis Theodorakis’s political activity were contradictory. His presence at the 43rd KNE (KKE youth) Festival in 2017 was a progressive step, but progressive and left-wing workers and youth were disappointed to hear of his support for the reactionary movement that developed in early 2018 over the issue of Northern Macedonia’s name.

However, anticipating the end of his life, in October 2020, Mikis wrote a letter to the General Secretary of the KKE, Dimitris Koutsoumbas, stating: “Now, at the end of my life, at the time of great pondering, all details disappear from my mind and only the “big issues” remain. This is how I view my most critical and mature years under the banner of the KKE. That is why I want to leave this world as a communist.” Mikis Theodorakis was married to Myrto Altinoglou, with whom they had a son and a daughter.