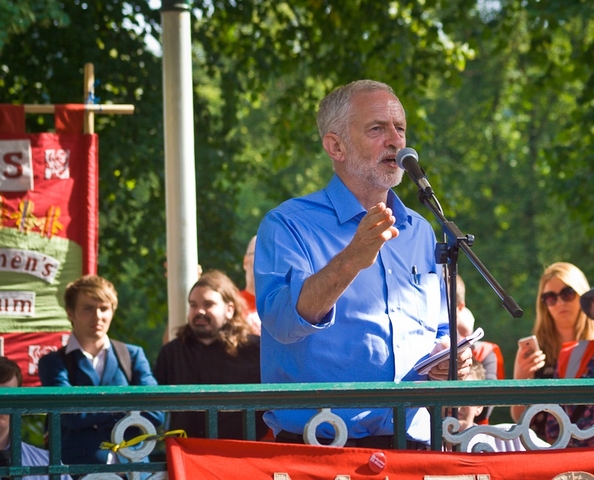 With only a few weeks to go until election day, Labour’s campaign to boot out the Tories is gathering momentum and the gap in the polls is narrowing. Despite a concerted and co-ordinated effort by the Tories, the right-wing press, and the Blairites to discredit Jeremy Corbyn, the Labour leader and his campaign are cutting through the web of lies and slanders by appealing directly to workers and youth on the basis of mass rallies and a bold and radical programme.

The task now must be to continue with this strategy and take the campaign up a gear, mobilising and organising the strength of the entire Corbyn movement in order to deliver a mortal blow to May and her government of thieves.

“Strong and stable” vs bold and radical

Whether by design or accident, Corbyn stole a march on his critics – both amongst the Tories and the Labour right wing – last week with the leak of the Labour election manifesto, which was widely and warmly welcomed by the British public. Across the board, Corbyn’s promises – to end austerity; renationalise the railways and Royal Mail; and build 100,000 council homes per year – have been shown to be extremely popular in poll after poll.

Although only officially launched earlier today, the support for the policies contained in draft manifesto meant that the Corbyn’s opponents were left on the back foot, unable to challenge the Labour leader on his anti-austerity, anti-Establishment pledges.

As a result, the final manifesto announced this morning continues with the popular policies in last week’s leaked version – a bold and radical set of policies that represent a clean break both from Tory cuts and New Labour’s “Tory-lite” programme.

In contrast, Theresa May and the Tories have yet to make any firm pledges, other than some laughable attempts to present themselves as the “true party of workers”, with vague and hypocritical promises to strengthen workers’ rights whilst refusing to reverse concrete attacks on workers’ rights, such as employment tribunal fees and anti-trade union laws. (Scandalously, Frances O’Grady, general secretary of the TUC, came out in support of May’s snake-oil pseudo-pro-worker promises, demonstrating just how bankrupt and craven the official trade union leadership can be in the face of the Establishment.)

Unable to criticise Labour’s popular policies, the Prime Minister and her friends in the mainstream media have instead had to continue with their personal attacks on Corbyn and his so-called lack of leadership qualities – an ironic assertion, when it is the current leader of the country who has refused to take part in a head-to-head debate with Corbyn. As a result, May’s endless mantra of “strong and stable government” is looking like an increasingly absurd statement.

For the many, not the few

Alongside his bold manifesto, the other main weapon in Corbyn’s arsenal has been the mass movement that stands behind him. Having (twice) mobilised hundreds of thousands of people to vote for him as Labour leader, it has always been clear what the Corbyn Labour campaign must do if it is to win this election: to mobilise this army of workers, young people, and students once again and organise a mass grassroots campaign – both on the streets and on social media – to take the battle to May and the Tories.

This is the only way to circumvent the hostile anti-Corbyn media and take Labour’s radical message directly to workers and youth.

The potential for this was seen this week, yesterday, when Corbyn made visits to two West Yorkshire locations. The Labour leader’s first trip was to Hebden Bridge, a small town in Hebden Bridge with a population of less than 5,000. Nevertheless, the crowd that turned up to see Corbyn speak was so large that he was forced to give the same speech twice: both to the audience inside the official venue, and to the hundreds who were eagerly waiting outside.

Corbyn second visit was even more spectacular, as thousands of student and youth turned up to hear the anti-austerity Labour leader, giving him a reception befitting of a rock star. Even the regional BBC news were forced to admit how unprecedented and spectacular it is to see such mass rallies in election times, given the disgust that exists towards the careerist creatures that have traditionally inhabited Westminster.

We publish here a report from Socialist Appeal activists in Leeds, who were present amongst the huge crowds yesterday:

As the rain began to fall in Leeds, more than 3000 waited expectantly outside of a workers’ social club and music venue, filling the building, the carpark, and the road outside for hundreds of metres, all to hear Jeremy Corbyn speak.

Overwhelmingly young people and students, the crowds swarming to listen (at only one day’s notice, the news spread by word of mouth) were a testament to the politicisation of young people and Corbyn’s strength in energising and engaging masses of people who - despite being new to political action - are sick and tired of business-as-usual, desperate for a break with the status quo.

Corbyn spoke about the NHS, mental health, education cuts and tuition fees, zero-hour contracts, protecting the rights of EU citizens, housing, progressive taxation, and the fight against inequality, all to rapturous applause. For students and workers who have been attacked by austerity, tuition debt, poor healthcare provision and punishing, insecure working conditions, Corbyn’s clear policies struck a very welcome chord.

The crowds of young people who’d come out to see Corbyn flew in the face of those who pronounce young people as apathetic and uncaring about politics. What was most striking about the rally was their fresh-faced enthusiasm as they chanted in excitement for Corbyn’s arrival, and any onlooker could see that his campaign has tapped in to a real sea change in society. This is what is threatening (to the Establishment) about his leadership: despite endless attempts to paint him as unelectable, what other politician has inspired and mobilised previously unpolitical people like this in recent years?

But it is not Corbyn’s personal charisma that is making the difference (he is not exactly the archetypal orator); it’s the content of his policies. For too long we’ve been let down by a Labour Party who have offered no real alternative to Tory austerity, leading many to dismiss all mainstream politicians as being indistinguishable. But armed with clear policies that promise to materially benefit those who’ve been attacked by the system for a decade, Corbyn has the potential to galvanise a movement based on a bold socialist programme – the only way of delivering the changes that people so desperately wish to see.

How far he will go depends on his ability to do just this. He needs to continue to go on the offensive against the Tories and the capitalists who they represent, and defend socialist policies as the only possible alternative to austerity.

The crowd in Leeds, desperate for change, were hungry for these left-wing ideas – a clear sign of the potential for a mass radical movement to develop in Britain. With only a few weeks to go before election day, Corbyn’s campaign has already seen an immeasurable growth in the quality and quantity of our movement. Regardless of the result on 9th June, mass rallies such as those seen in Leeds this week show that the fight for our future and the struggle for socialism will certainly grow in the period ahead.

Kick out the Tories! Fight for socialism!

By comparison, Theresa May has actively avoided any interactions with the public, with her PR team keeping her as far away as possible from the lives and concerns of ordinary people. The Prime Minister’s awkward encounter yesterday with a voter who lambasted her for the Tories’ attacks on people with disabilities and learning difficulties showed why the Conservative campaign team are so keen to shield the out-of-touch May from such contact. It also sheds light on why the Tory leader is so insistent on steering clear of any debate with Corbyn, knowing full well that her Labour opponent will expose all the glaring hypocrisy and contradictions in May’s programme. (Not that May’s refusal to debate has stopped Corbyn from putting the Prime Minister on the spot over her support for the rich and the elite.)

With huge crowds of thousands turning up to see Corbyn speak; over 100,000 young people signing up to vote; and a mass grassroots campaign developing to campaign for Labour on the streets, there is still time for Corbyn and Labour to turn things around and catch up with the Tories in the polls.

UKIP are battered and the Lib-Dem pro-Remain surge has failed to materialise. Instead, this election has polarised into a clear choice (outside of Scotland) between a Tory Party hell-bent on attacking workers, the poor, and the youth and carrying through a disastrous hard Brexit at all costs; and a Labour Party offering an anti-austerity programme that promises to make the rich pay for this crisis.

The task ahead for the next few weeks is for the Corbyn campaign to build on the momentum that has been generated, taking the fight to May and the Tories, and going on the offensive on the basis of a mass grassroots movement and a set of bold socialist policies.

Kick out the Tories! Fight for socialism!