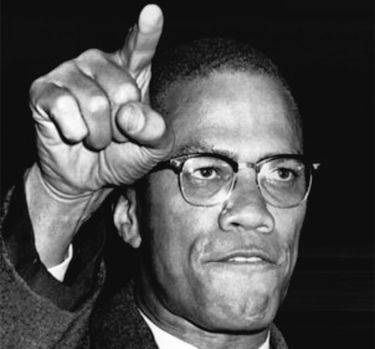 We received this letter from an American comrade, Michael Hureaux, in Seattle.

He rose renewed renamed, became much more than there was time for him to be.
Robert Hayden

Malcolm X, also called El Hajj Malik El-Shabazz, born Malcolm Little in Omaha, Nebraska, May 19, 1925, railroad porter, street hustler, prison convict and autodidact, orator, organizer and Information Minister for the Nation of Islam, founder of the Organization for African American Unity, gunned down at the age of 39 before an audience of followers at the Audubon Ballroom in New York City on the 21st of February, 1965. He has been called, for very good reasons, the most significant African American voice of the 20th century by many a historian. Alongside this appraisal resides the many political schools of thought that lay claim to his legacy. Among these may be included the Nation of Islam; whose current leader, Minister Louis Farrakhan, acknowledges that his own words may have contributed to the climate that fostered the murder of Malcolm X.

Foremost among the writings on Malcolm X in our own Trotskyist canon must be considered the works of the late George Breitman, whose cataloguing of the numerous public speeches and press conferences of Malcolm is quite extensive. Breitman’s writings, like those of many historians who orient to the “left”, spend much of their course arguing that Malcolm X was “evolving” into a socialist revolutionary. And maybe this was the case, and maybe it wasn’t. Certainly none of the latter statements made by Malcolm indicate that he was ever headed in any direction other than the one that he chose for himself when first he entered the Nation of Islam, which was that of providing what he believed was the best possible leadership for Black Americans that time and circumstance would allow him to organize or become. Malcolm X was always a man who was rethinking and recreating himself, but there is no concrete documentation that he was on the verge of becoming a Marxist, or even a socialist. His first allegiance to the black community, and even his internationalism, were rooted in his interpretation of Islam at the time of his death. And that has to be enough, if we’re going to be honest in talking about Malcolm X in his own right.

What was most striking about Malcolm X in his own lifetime is what resounds through the written transcripts of the many statements and articles that survive him. Malcolm X loved black people, he was convinced of the need of all people for the revolutionary transformation of society, and he was an outspoken and unrelenting opponent of western imperialism, particularly the variety led by the United States. The people who own capitalist society knew that Malcolm would never stop speaking against their excesses and their crimes, and so they struck him down, make no mistake; whether indirectly through the hands of misguided members of the Nation of Islam (who were friends of the ruling class), or through their political police agencies, they struck him down. But even in death, the words and life of Malcolm X remain a burning thorn in their side, and they continue to shake the sensibilities of whoever encounters them. May they remain galvanizing to us all, and always a bone catching in the throat of the ruling class.