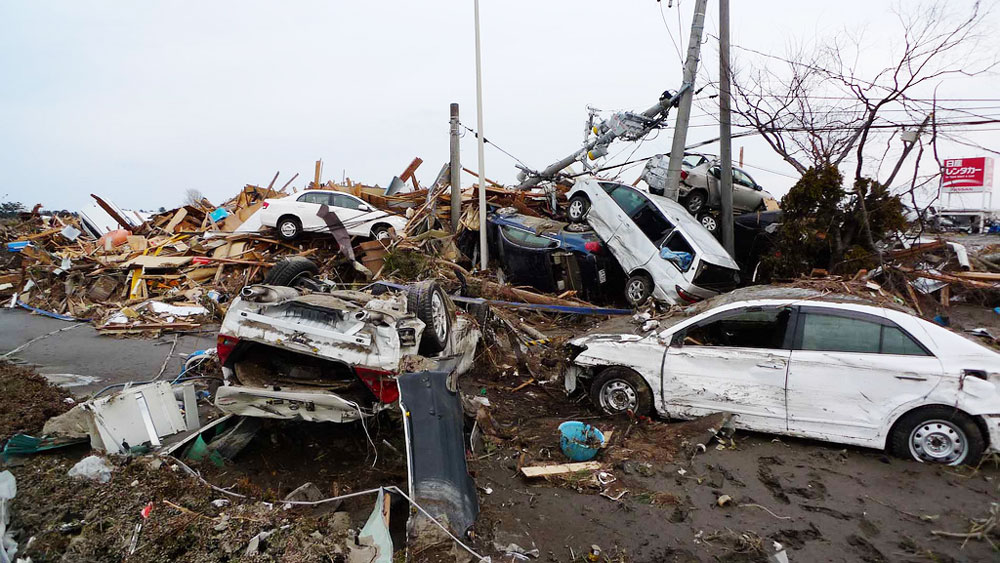 It is the worst disaster for Japan since the war, since Hiroshima and Nagasaki. This triple whammy of a force-9 earthquake, a tsunami, followed by a nuclear disaster, has shaken the country to its very foundations. And the consequences of this multifaceted catastrophe are widening by the day.

More than 10,000 people have perished, hundreds of thousands have been displaced, and huge numbers are injured or missing. Medicines are running out as well as food for those most affected in Japan’s north east. Sickness and hunger have become increasingly prevalent, revealing the enormity of the humanitarian crisis overtaking the country. This devastation is going to have massive knock-on effects in the weeks and months, and possibly years that lie ahead, not only for the people of Japan, but far beyond.

Despite attempts to play down the seriousness of the situation by some commentators, the damage done in Fukushima can only be described as disastrous. “Events in Japan are more serious than Three Mile Island,” stated Steven Chu, the US energy secretary. But it may turn out to be even worse, with the danger of possible nuclear meltdown and all that would mean.

The severity of the crisis has exposed the deep fault lines in Japanese society, whose establishment built the country’s future on nuclear power. Japan’s ruling class, in league with the corrupt nuclear industry, were determined to maintain its economic hegemony whatever the cost and whatever the danger. In an attempt to reduce their dependence on imported oil and coal, they constructed a string of 55 nuclear power plants along the world’s most earthquake-prone islands. In other words, the present nuclear catastrophe was manmade and simply waiting to happen. It was just a matter of time.

Japan’s elite was not concerned about ordinary lives. All they were concerned about was power and prestige. They were given the green light to build nuclear plants, despite the obvious risks. They believed they could be made “safe” by new technology. But how is this possible? How can you plan for the unplannable? “What the events point out to me,” said Stephanie Cooke, editor of Nuclear Intelligence Weekly, “is that a nuclear reactor is so hugely complex that planning a sequence of events that could lead to an accident are simply too multitudinous. Every time there has been an accident, there is a different sequence of events that led to these.”

When the earthquake struck Fukushima, three reactors shut down as planned, but no one expected the backup cooling equipment to be knocked out by the tsunami. No one foresaw the spectacular explosions that destroyed the outer buildings. Nobody foresaw the dangers of the spent nuclear fuel overheating in the cooling pond. No doubt there will be further surprises in this unstable and dangerous situation.

This light-minded strategy of relying on nuclear power is not simply a Japanese problem. More than 400 reactors operate worldwide and about 90 of these are in areas of significant seismic activity, according to figures from the World Nuclear Association. And more are being built. Six nuclear reactors are being planned in Jaitapur in India, just down the coast from Mumbai. The site is in a Zone 3, or medium risk, seismic area. But nuclear reactors are big business, financed by the world’s biggest international banks, and in this case are being built by Areva, the French energy giant.

The company that owns the Fukushima Daiichi nuclear power plant is the Tokyo Electric Power Company (TEPCO). They are mired in secrecy and even in past corruption. In 1995, they were engaged in a cover-up of the extent of an accident at the Monju fast-breeder reactor. Four years later, three workers at the Tokaimura reactor suffered high doses of radiation when safety procedures were circumvented. Then in 2003, TEPCO was caught falsifying safety data, forcing the closure of its reactors for a month. Again in 2007, after another earthquake, TEPCO admitted that another plant which had leaked radiation had not been built to specifications.

“They have no crisis management because they were never ready for a crisis,” explained Michael Cucek, a political analyst living in Tokyo. “The fear is TEPCO is not telling the whole truth. They are not in the habit of telling everything they know.”

Such secrecy is endemic in this billion-dollar industry, which also has a very cosy relationship with governments and regulators alike. It has been described as “Japan’s nuclear power mafia”. Although even the prime minister Kan, to his annoyance, was kept in the dark about the third explosion for more than an hour.

However, now this rottenness at the heart of business and government is coming to light. It is producing anger in the population, subjected to misinformation, fear of radiation and growing hardship. While foreign nationals are urged to leave Tokyo by their respective governments, the local population is left to ponder its fate. While the Bank of Japan and the G7 can spend billions on supporting the yen, hundreds of thousands remain without heat, shelter, medicine or food. Yuhei Sato, governor of Frukushima prefecture said people were “uneasy and angry.”

In the weeks that lie ahead, TEPCO and the government will be held to account for their handling of the crisis and the failings of the nuclear industry. A weak corrupt political system, already under strain, will be further undermined. “That disenchantment is now complete”, stated the Financial Times (19-20/3/11)

The crisis has also spread fears throughout the world’s business elite, worried at the global fallout from Japan. Within days, Germany suspended operations at seven ageing nuclear reactors, as 50,000 protesters took to the streets. Other countries have instituted “reviews”, as they grapple with the backlash against nuclear power. This includes Britain, which has one of the most ambitious new-build programmes in Europe, and could see at least 10 reactors built over the next 15 years.

Apart from the political implications there are also serious economic implications arising from Fukushima. The weak world economic recovery is finely balanced. Japan, presently the third biggest economy in the world, remains vital to the health of world capitalism. But Japanese capitalism is threatened with economic relapse, as the yen is driven up in value by speculation, and its industries are subject to power cuts and supply line disruption. The G7 powers, as well as the Bank of Japan, have rushed to purchase yen to keep its value down. A high yen will make Japan’s exports, on which it depends, dearer and therefore less competitive. Net exports accounted for three-quarters of Japan’s growth in the past two years. If they fall, Japan falls, and the world economy is affected. Japan’s GDP in the last quarter actually fell. A further decline in this quarter, a likely scenario, would mean a double-dip recession.

The global supply chain has also been fractured. The vehicle industry is being hit particularly hard. North-eastern Japan has become a big centre for car production, where Toyota, Honda, Nissan and others operate facilities manufacturing parts. The capitalists were all keen to embrace “lean production” techniques from Japan, to keep supply lines as tight as possible. Stocks were deliberately run down to the absolute minimum. This can work well as long as there is no disruption. Now they are seeing the affects to this short-sighted policy. This once again reveals the anarchy of capitalism, which attempts to squeeze the maximum profit from every pore of production, but leaves itself more and more vulnerable.

These supply chains are being broken by reductions in output due to power cuts and production stoppages. Infrastructure has also been affected by the crisis, especially transport, again due to fuel shortages. There are concerns about the country’s ports. Chip plants need large amounts of electricity and water, both of which have been badly affected. Given the complex nature of these manufacturing operations, even small disruptions can reverberate for months.

Honda has 113 suppliers around the disaster area. These will be affected to one degree or another. This disruption will have a knock-on effect further afield. There were potential supply problems at the Honda plant in Swindon, its main facility in Europe. Japan is not only an exporter, but has an important internal market for cars, the third largest after China and the US, which will be also affected by the crisis.

The unstable economic situation is being further compounded by the rise in oil prices, following instability in the Middle East.

Japan’s output is still well below levels set before the global crisis of 2008-9. This new crisis will come at an economic cost. The attempt to stabilise the situation by pouring more money into the system will see government debt soar. It is already at 200% of GDP, the biggest in the industrialised world. This will place further stain on the government budget as the Bank of Japan purchases greater quantities of government bonds. If growth also slows for the next couple of quarters, Japan’s debt to GDP will become even more extreme. But there is little more they can do. Interest rates have been held at almost zero for years. While reconstruction will help boost the construction industry and provide an economic spur, it will take a long time to recover from the crisis, the cost of which has been put at almost $500bn.

Under these circumstances, Japan can become the Achilles heel of world capitalism. The Japanese nuclear power sector is in turmoil. The plants at Fukushima will need to be decommissioned and possibly nationalised. The crisis will put pressure on the nuclear industry, as the government, under pressure from a sceptical and angered public opinion, demands a rethink of their future strategy. This will place more demands on coal and oil in these times of great turbulence.

It demonstrates once again how capitalism and the market economy are incapable of developing society in a harmonious fashion. The drive for profit inevitably leads to short-cuts and corruption given the vast amounts of money involved. Nuclear power in the hands of profit-hungry companies is a dangerous concoction. This is a key lesson from the Japanese catastrophe.

Today’s resources cannot be left at the disposal of big business. The anarchy of capitalism, based on the maximisation of profit, puts the livelihoods of millions at risk every single day. The resources of the planet need to be harnessed and planned and not recklessly squandered in the pursuit of private profit. The contradictions of the system have led us into a blind alley. If capitalism is allowed to continue there will be more catastrophes, even more dangerous than that of Japan today. The world is being brought to the brink of disaster by private ownership and the tyranny of the market. Fukushima is a living, or more correctly a dying, example of this. The situation cries out for rational planning.

Only by the overthrow of crisis-ridden capitalism and the establishment of socialism can we avoid such a nightmare scenario in the future. Only then can we democratically plan our resources, where the needs of ordinary working people take absolute priority as opposed to the insatiable greed of multinational corporations. Only then will science become the handmaiden of humanity’s progress and development and not the slave of billionaire profiteers. That is the lesson of Japan’s misery.