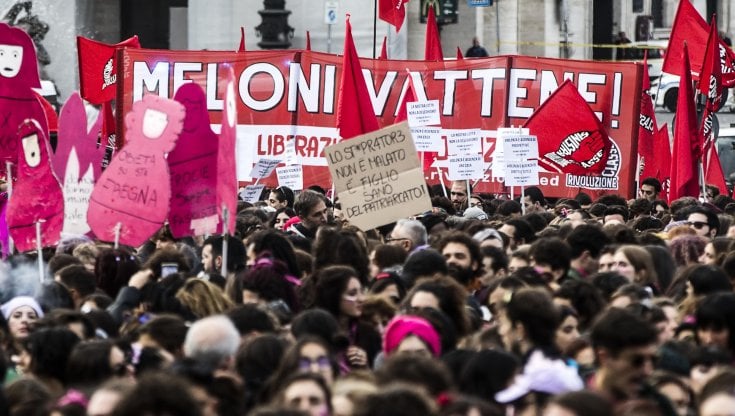 As reported on previously, comrades of the IMT in Italy were attacked by right-wingers for raising slogans against Prime Minister Giorgia Meloni at a demonstration against violence against women. Subsequently, basing themselves on the poisonous ideas of identity politics, the protest organisers have used intimidation to try and push our comrades out of the movement. In the following open letter, our comrades appeal to all class-conscious workers and activists from the women’s and LGBT movements to reject these methods.

To associations, political and trade union organisations and to all those involved in the struggle for women’s and LGBT rights

The victory of the right wing in the 25 September elections and the formation of Meloni’s government pose the need to fight in defence of women’s rights and LGBT rights.

The right has openly declared war over these questions, as indicated by the programme of Fratelli d’Italia [Brothers of Italy] itself; the election of Lorenzo Fontana as Speaker of the House [an arch-reactionary, homophobic representative of the Lega]; the presentation of a bill in parliament for the “recognition of the conceived child as a legal entity”; and the appointment of a bitter enemy of women and LGBT people’s right like Eugenia Roccella as Minister for Family, Childbirth and Equal Opportunities.

One would have thought that appealing for mobilisations to oust such a government would be the most natural course for the movement.

And indeed, our comrades in Sinistra Classe Rivoluzione [‘Left Class Revolution’ – the IMT in Italy] took to the streets of Rome on 26 November on the occasion of the International Day Against Violence Against Women, with a banner bearing the slogan, “Meloni Out! Our liberation through revolution!”

Surprisingly, however, those who had called the march, Non Una di Meno [NUDM – ‘Not One Woman Less’], considered this slogan to be “inappropriate”, and their stewards did everything they could to isolate us from the demonstration.

When we spoke at the national meeting of NUDM after the demonstration, the stall displaying our political material was forcibly closed by several dozen leaders of NUDM, who threw our papers and pamphlets to the ground and trampled them. They openly declared that they would deny us the right to express our ideas, and this is precisely what they did in the course of the meeting. When we requested the right to explain our position and lay out what had actually happened at the demonstration, our comrade was subjected to mockery, was shouted down, and a chorus of singing was started to drown them out.

In the opening remarks of the assembly, the NUDM leadership stated that they wanted a “democratic discussion,” but they immediately added: “We do not accept anyone who takes to the streets bringing content that has not been shared and discussed [by the meeting of Non Una di Meno]”. Thus, they made official via live-stream what they had said whilst physically attacking on our stall: “it is our demo, and we decide what can be raised on it.”

This is what they call the method of ‘consensus’, which they implement through intimidation, violence, censorship, and bullying. Unfortunately, these methods are not new. Violence to silence feminists who do not identify with the ideas of ‘queer theory’ have become commonplace in a number of countries. When not resorting to physical intimidation, we see aggressive language, and even the imposition of a taboo on the recognition of the very existence of women.

We refuse to accept days of action like 25 November (which became a regular event after a wave of mass struggles on an international level seven years ago), much less International Working Women’s Day on 8 March (a tradition that goes back more than a century) being converted into the monopoly of a single organisation. Street demonstrations and mass meetings of the movement are public spaces in which everyone has the inviolable right to freely express their thoughts. The possessiveness shown by leaders of NUDM over demonstrations and meetings, over which they claim the sole right to decide on our identities, is unacceptable. We will never accept it.

In the same vein, we cannot accept censorship of those openly opposed to the Meloni government! We are urgently faced with the task of building a broad opposition movement against the attacks this government is preparing. We believe that there is huge potential to build such a thing in Italian society. But it needs to find open channels of expression. What happened on 26 November shows that these channels have been shut down. This also explains the significantly reduced turnout compared to previous years.

We are calling on all women, women workers, and all sections of the women’s and LGBT movement that are critical of these intolerant attitudes, to unite against those who wish to dictate to the wider movement – a movement that is full of potential that far exceeds what we have seen so far.

Drawing inspiration from the best traditions of the workers’ movement and of all movements of struggle, we are launching this appeal with the conviction that we can develop a democratic, open and frank debate where – without hiding our differences – we can find common points of agreement upon which we can build the movement.

To sign the appeal and for messages of support: serena@marxismo.net with copy to organizzazione.scr@gmail.com