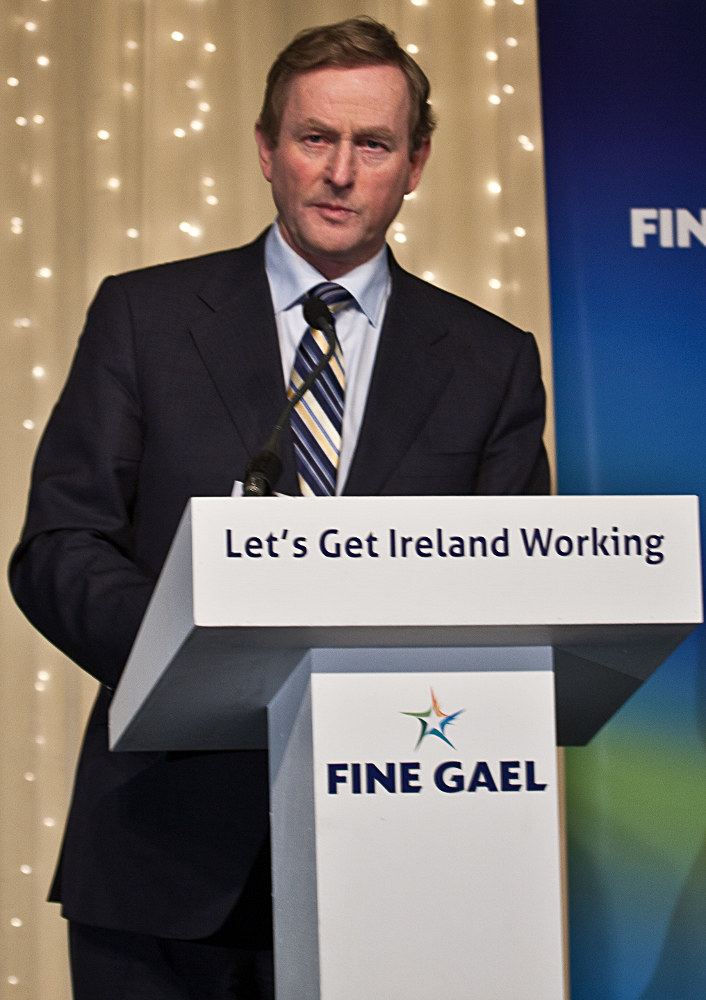 Some commentators described it as a “democratic revolution.” They were not talking about the current uprisings in parts of North Africa or the wave of mass demonstrations across the Middle East. Rather they were talking about the results of the 26-county elections, which saw the dominant force, Fianna Fail reduced to a mere handful of seats, 20 in all.

The party that emerged from the depths of the old nationalist parties and the fascists, Fine Gael, reached their highest every total of seats, 76. The Labour Party also reached its highest number of seats, 37. It is clear they will form a new coalition Government in tandem with Fine Gael unless there is a massive revolt by rank and file Labour Party members. That leaves an opposition composed of Fianna Fail, Sinn Fein(P), and Independents composed of a variety of views including five who signed up to the United Left Alliance. Sinn Fein (P) had their best every result winning 14 seats.

The irony of the results is that, while it is clear that the electorate punished Fianna Fail for the appalling economic mess that ended up with the Irish people in hock to European bankers and forced to face years paying off debts run up by other bankers, they also elected in overwhelming numbers those committed to the self same policies that Fianna Fail were advocating. As political commentator Vincent Browne put it: “If Fine Gael and Labour have problems in agreeing a programme, the problems are ones of personality and perception. There are no incompatibilities of principle or ideology.”(1)

They both agree to submit to the European Central bank and the IMF. They will want to reduce the interest paid to the same banks but not [renounce] the principle of punishing the vast majority of the Irish people for the sins of the bankers and property speculators. To pay off the bankers they are going to introduce a property tax on top of the huge burdens that the previous Fianna Fail/Greens coalition had already imposed.

The leadership of the Labour Party is firmly in the hands of those who once were members of the Workers’ Party and who knew clearly of the continued existence of the Official IRA. Yet they still pretend they cannot work with Sinn Fein (P) because in the words of some Free State commentators the SFP are “toxic”.

Gillmore launching the Labour Party election manifesto. Photo: William Murphy It is clear that large sections of the electorate, north and south do not share this view. To its credit, the SFP at least adopted a policy of “burning the bond holders”, i.e. refusing to pay the debt.

The Labour Party for its part still has not yet learned the lessons of its involvement in coalition with mainstream capitalist parties. Vincent Browne quotes figures from the last time Labour entered a coalition:

“During the period from 1994 to 1997 when Ruairí Quinn was Minister for Finance, Seán Healy, then of Cori, calculated that in every one of the budgets for which Quinn was responsible, it was the rich who benefited most. And, in a telling indictment of Labour's five-year tenure in office in the 1990s (first with Fianna Fáil from 1992 to 1994 then with Fine Gael and Democratic Left from 1994 to 1997), the Institute of Public Health calculated that 5,400 people died prematurely every year because of the scale of inequality here.”

There is no evidence that Labour’s participation in a capitalist Government has done anything to alleviate the conditions of the working class. The evidence is to the contrary. Clearly the Labour leadership, for the baubles of office, is prepared to sacrifice the Irish working class on the altar of the foreign bondholders, bankers and exploiters of the workers. 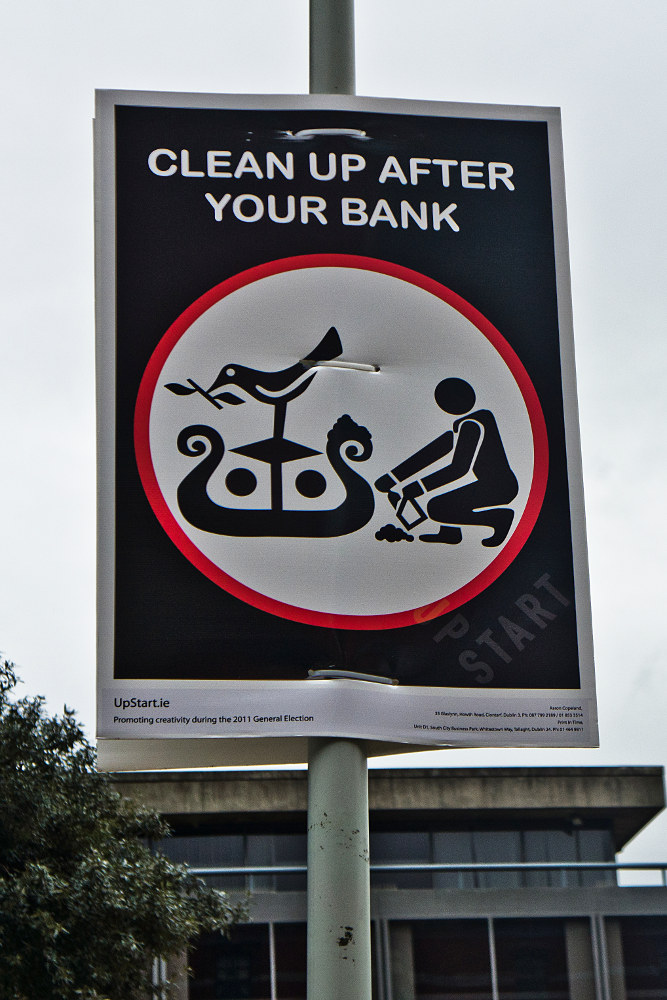 "Clean up after a bank". Photo: William Murphy Perhaps Eamon Gilmore should remember what he stood for once when a member of the Democratic Left after splitting from the Workers’ Party. This was the Democratic Left position on the Labour Party in the early 1990’s:

"Who can point to a single issue in the economic area where this Government has adopted a position or taken a decision that might not have also been taken by the previous Fianna Fáil-Progressive Democrats administration or the minority Fianna Fáil Government which went before that?

"Has the Labour presence led to any new radical approach to the unemployment problem or new measures to secure an equal distribution of wealth? There is no evidence of that..."

"Far from being in partnership with Fianna Fáil, the Labour Party has now been almost totally assimilated into the political culture which the Tánaiste (Dick Spring) spoke of in such withering terms in the dying days of the last Dáil."

Men of principle, how are ye!

Like previous leaderships, the current Labour leadership is well assimilated into the political clientism that passes for politics in the 26 counties. The system itself is geared towards that. Only a radical break can change that.

The coming together of United Left Alliance (ULA) and its modest success hold out some hope for the future. It has been described, I believe, unfairly by the IRSP as “-a couple of sects espousing reformist rhetoric and reformist demands.”(2)

Indeed it may well turn out a total failure and previous history of the organisations involved does not breed a great deal of confidence in its future direction. The IRSP are indeed correct in questioning its coming together only at election time. Indeed it would be better if a longer-term strategy was worked out in conjunction with those who aspire to a socialist society. 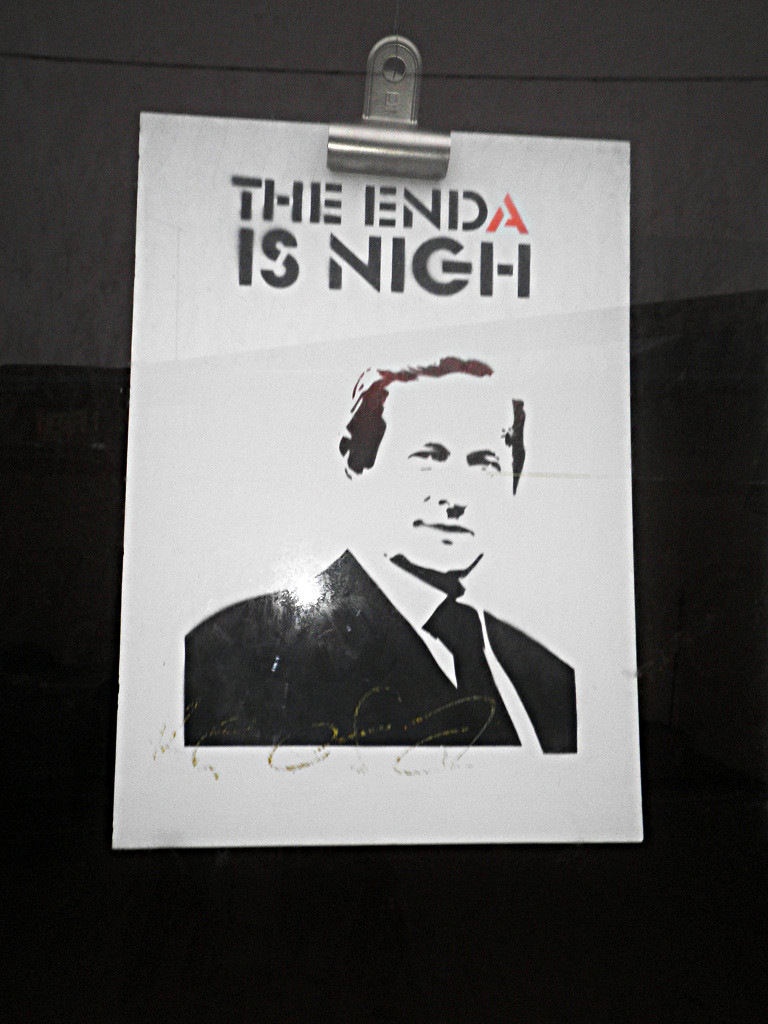 Photo: Stephen Spillane However, to simply talk about reformism in a condemnatory way misses the point. How to convince those from the working classes to vote, not to replace Tweedledum (FF) with Tweedledee (FG) but to change the system? And it is only the working class who have the power to change the system. Currently it is easy to say that the masses are confused by reformist ideas and that they don’t vote or act in their class interest but to say that is to ignore reality.

Every day there are clashes between the forces of capital and labour (Not that the Labour Party would ever describe them as such). For example see the “SUPPORT O'CALLAGHAN DAVENPORT HOTEL STRIKERS” on Facebook. These struggles will intensify as the screw is tightened on the working class. All those manifestations of struggle need to be generalised so that the class see the connection between their exploitation and the system. That requires leadership. While the Red Plough has no illusions about the leaderships of parties like SFP and the Labour Party we do recognise that many of their rank and file are committed to change. Name calling does little to build a movement of change.

Is the left, whether the Labour left or the Republican left, capable of creating the revolutionary leadership that is needed?

(1) Fine Gael for office with a few capitalist cheerleaders

[Originally published in The Red Plough, Vol. 2-No 1, March 2011 http://theredplough.blogspot.com/]