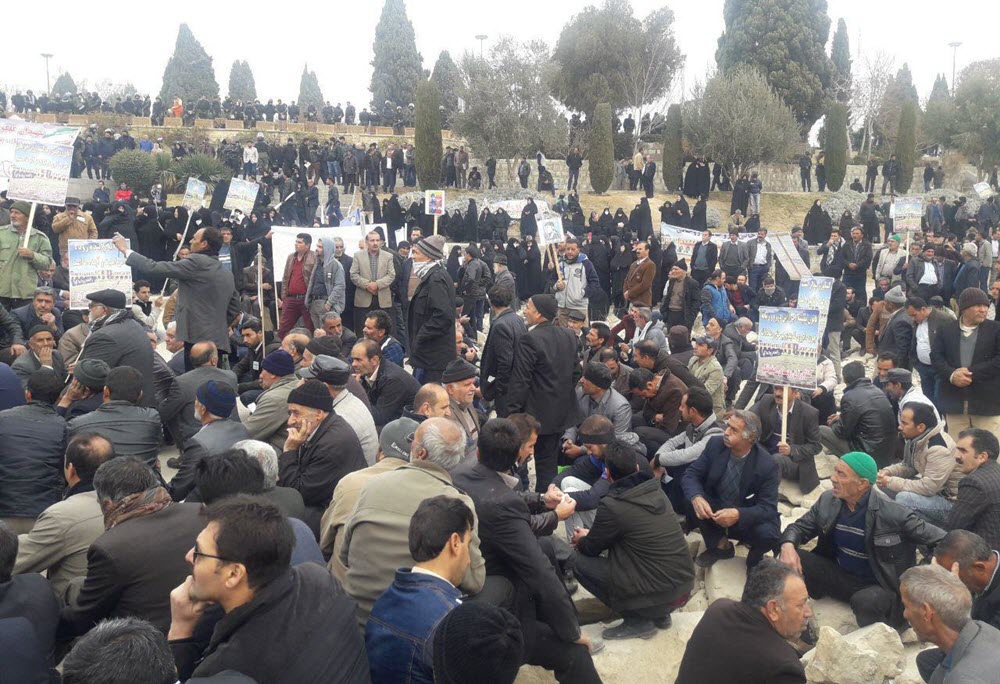 On 22 May, 1,400 farmers protested against the lack of permanent access to water in the Iranian province of Isfahan. The regime answered by sending riot police, who brutally beat the farmers, who fought back, leading to clashes. This was not an isolated incident; there is widespread discord among farmers, with recent protests in Khuzestan, Sistan-Balochistan, Khorasan and elsewhere.

The ongoing crisis in Iran with the highest inflation rate since the second world war, forcing workers and farmers alike into poverty. An elderly farmer attending the protest in Isfahan province explained:

“Everything I had, I sold to survive. I had cows, goats and sheep. All gone now. I have nothing else to sell. I have sent my children to the city to find work but there is no work. I am a diabetic but I cannot even afford a check up anymore.”

Decades of capitalist mismanagement, corruption and climate change have led to a severe water crisis. This year alone, rainfall has decreased 53 percent compared to the previous year, and 41 percent compared to long-term average. The World Meteorological Organisation expects rainfall to decrease by 75 percent by 2025 as a result of a climate crisis, resulting from reckless capitalist exploitation and destruction of the planet.

Rather than mitigate the crisis, the Iranian capitalist class has continued to dam rivers, and drain groundwater and lakes, disregarding the long-term impact of such measures. The exploitation of groundwater at an industrial scale has drained underground aquifers at a rate that has increased from 20 to 2600 percent across Iran between 2002-2015, leading to widespread desertification.

The regime’s own environmental experts admit that, if nothing changes, Iran could lose 70 percent of its farmland in the next 20-30 years. Already, 30,000 villages have been forced to evacuate due to water scarcity.

Attempts by the government to regulate damming projects and groundwater exploitation are completely hollow given the rottenness of the ruling capitalist class, and corruption at the highest levels. The public sector isn’t any better. Agriculture and irrigation projects are riddled with nepotism and profiteering.

The corruption of the regime is further demonstrated by the rationing of scarce water during the scorching summers, with state and private companies belonging to the regime and its supporters being apportioned a bigger share. For example, water in the Isfahan provinces is being diverted to steel plants affiliated with the Revolutionary Guard.

Alongside the drought, Iran has faced worsening flash floods. During 2019-2020, 28 of 31 provinces experienced flooding. This water could’ve been collected and used to build up water reserves. But Iranian capitalism is incapable of this type of planning. The same can be said about the demand of Iranian environmentalists to develop solar desalination plants, which have the potential to meet all the water needs of Iranian industry.

The failure to accomplish this is not due to the lack of resources or technological abilities. After all, this regime is capable of developing advanced nuclear weapons and ballistic missiles. Yet it cannot build simple solutions to overcome the water crisis. The capitalist and corrupt semi-state companies hoard a precious resource and strive to enrich themselves further, while the workers, farmers and poor are left wanting.

Current irrigation projects are falling apart, with workers going unpaid for months at a time, while millions are being funnelled into the pockets of private constructors who are often being paid for unfinished and non-existent projects. This shows the true parasitic nature of Iranian capitalism.

Previously, the regime was relatively popular among the traditionally more conservative and religious rural population. But dissatisfaction is on the rise, as the true face of Iranian capitalism is becoming clearer by the day. During a previous protest in April in Isfahan province, a farmer gave a speech in which he said:

“We do not have any quarrel with any other province. Our fight is with the government. The government of the Islamic Republic, which has been selling our water for 20 years. What right does the government have to sell our water to industry?”

He concluded by saying: “If there is poverty in a country it is only because their rulers are thieves – like our so-called Islamic Republic”.

These radical conclusions are the result of farmer protests that have been underway since 2018, alongside the struggles of the working class. Unfortunately, these protests are isolated in each province, with the regime often turning them into a conflict between provinces and industries over water allocation.

The farmers have nothing to gain from fighting among themselves or against the workers, when there is the potential to fulfill everyone’s needs. There have been instances of solidarity between workers and farmers. For example, in June 2020 construction workers on an irrigation project in Sistan-Balochistan went on strike in support of local farmer protests, as well as to demand unpaid wages.

Workers in agroindustry, such as the militant Haft Tappeh workers, on the largest sugarcane plantation are themselves threatened by the water crisis and have been on strike since 30 May; demanding payment of wages since the new year (20 March) and protesting their lack of water. They must reach out to the workers and farmers of Khuzestan and beyond for a united struggle against the regime.

The popular slogan of “Bread, Freedom and Councils” by the workers’ organisations; which echo the demands of the 1979 revolution, should be brought to the rural population. Farmers and workers must unite in the class struggle through a common programme including: welfare payments and subsidies to increase according to inflation, guaranteed free and equal access to healthcare and education for all Iranians, and basic political rights such as right to strike, protest and assemble.

Also, a programme of public works should immediately commence, bringing an end to unemployment and swiftly dealing with the water crisis through irrigation projects, developing solar desalination and reclaiming land from desertification.

For such projects to be implemented they cannot be in the hands of this criminal regime or the gangster capitalists. Therefore, all construction and engineering companies should be placed under the control of workers' councils. These efforts, and the task of water allocation, should be coordinated by a national council of workers and farmers.

Down with the Islamic Republic! Down with capitalism!

The regime has nothing to offer the masses, as seen in its inability to address the demands of continuous protests by every layer of Iranian society since 2018. The 18 June presidential election is even more of a joke than usual. Previously, there has been a semblance of competition, with people from different factions of the regime being approved to stand as candidates. This time however, the regime has only approved seven candidates, all from the hardline conservative faction.

This move does not come from a position of strength but of weakness. For decades, the regime could switch between hardline and moderate, liberal governments. This was a safety valve to let out a degree of social discontent via electoral means. But with the factional fighting increasing and the social and economic crisis deepening, the regime is clamping down on the upcoming election in order to prevent a movement erupting in and around the different campaigns.

All the mass movements since 2018, the uprisings, and the spontaneous national strikes in the autumn have failed because of lack of leadership and national coordination. It is only the working class that can lead Iran out of the horrors of the pandemic, ecological disaster and the ongoing economic crisis. All of these are part of the endless horror of capitalism. Through a revolutionary programme, the workers can unite all the oppressed masses under their banner against the regime. The united masses could then swiftly overthrow rotten Iranian capitalism!