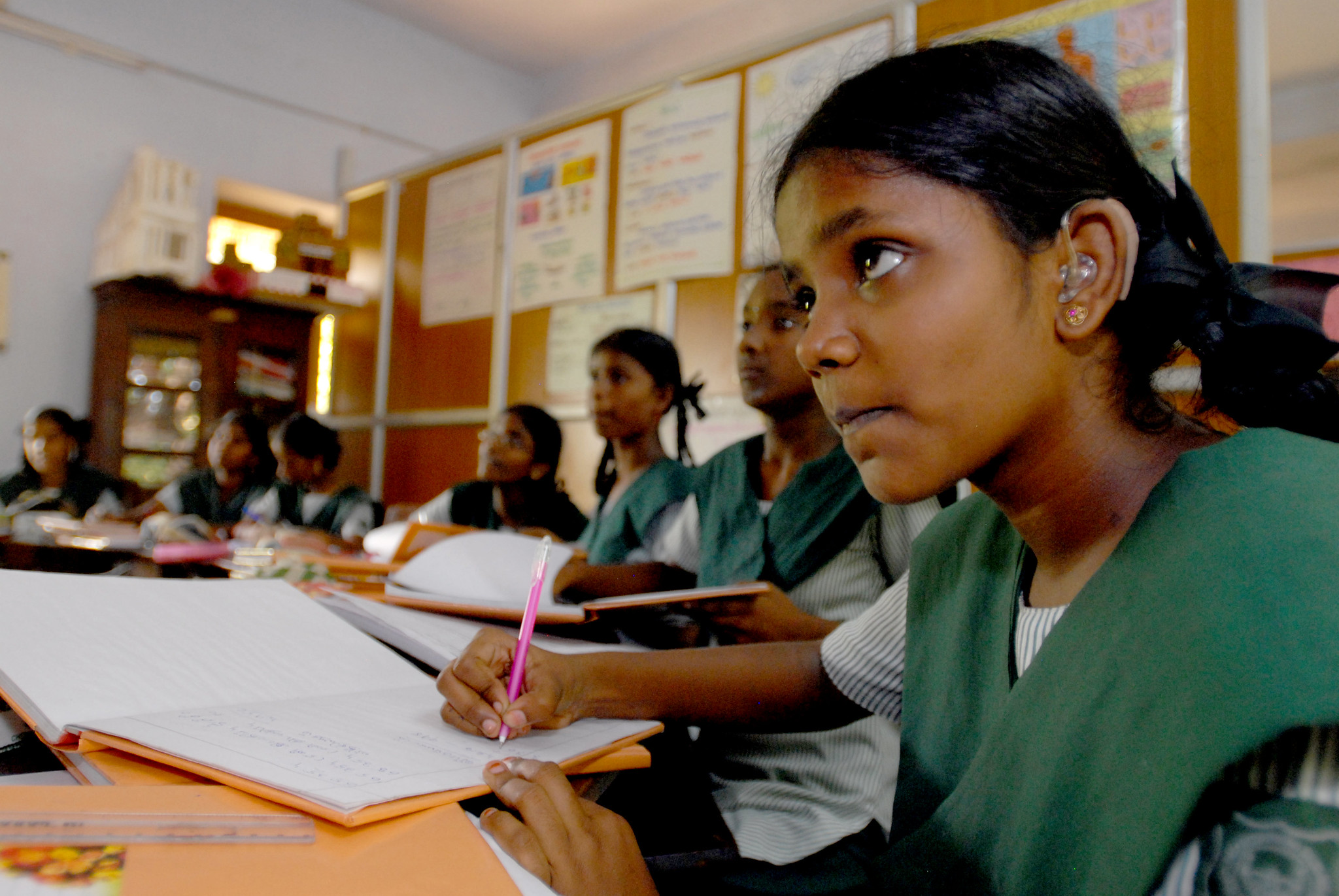 Years of cuts and austerity in the education sector have hit poor and middle-class families in India, depriving their children of basic education. The COVID-19 situation has only worsened the situation. The fraud of online education, combined with fee increases, budget cuts and job losses have undermined India’s already crumbling education system, with only wealthy families still able to educate their children.

On the other hand, there is a booming business of private schools, which charge parents exorbitant fees for their children’s education. This mafia of private schools not only deprives parents of money but also fails to pay their employed teachers a proper living wage. They are parasites upon the whole social system. There are around 400,000 private schools in India enrolling approximately 70 million students, against 113 million enrolments in government schools. Apart from this, there is a vast number of unregistered private schools that are not on the state’s radar and records, operating with the worst teaching and working conditions.

Online schooling is impossible for the poor

With the COVID-19 hitting India, all schools are being told to move to online teaching. Let alone internet facilities, there is hardly electricity in the rural areas, and most of the urban neighbourhoods. The internet is available to only 50 percent of the population, and people can get access only if they can pay for the service. 65 percent of the whole population either has no electricity, a reduced-hours supply or simply cannot afford to pay electricity bills. Already, poor and middle-class parents are stretched beyond their means to pay for fees, books and clothes; and now they are told to buy computers and pay for the internet to access online education. This massive burden on families will push millions of school students out of education.

The minimum wage for average workers, as announced by the Modi government, is 5,340 INR ($70) per month. This barely covers the cost of living, and often people on minimum wage are on the verge of destitution. The additional combined computer, internet and electricity cost per month for online education on average comes to around 1000-1300 ($13 - $17). This eats up 20 percent of the monthly minimum wage on average. No one on minimum wage can afford this. Another shocking statistic is that 56 percent of workers earn less than minimum wage! And 68.8 percent of people live below the poverty line, i.e. living below $60 per month. This is the gravity of the situation. Primary education will remain a privilege for the rich who can afford the luxury to pay private school fees, or access online education. A whole generation in India will be lost to education, and Modi’s government has no plan even the near term to address this. 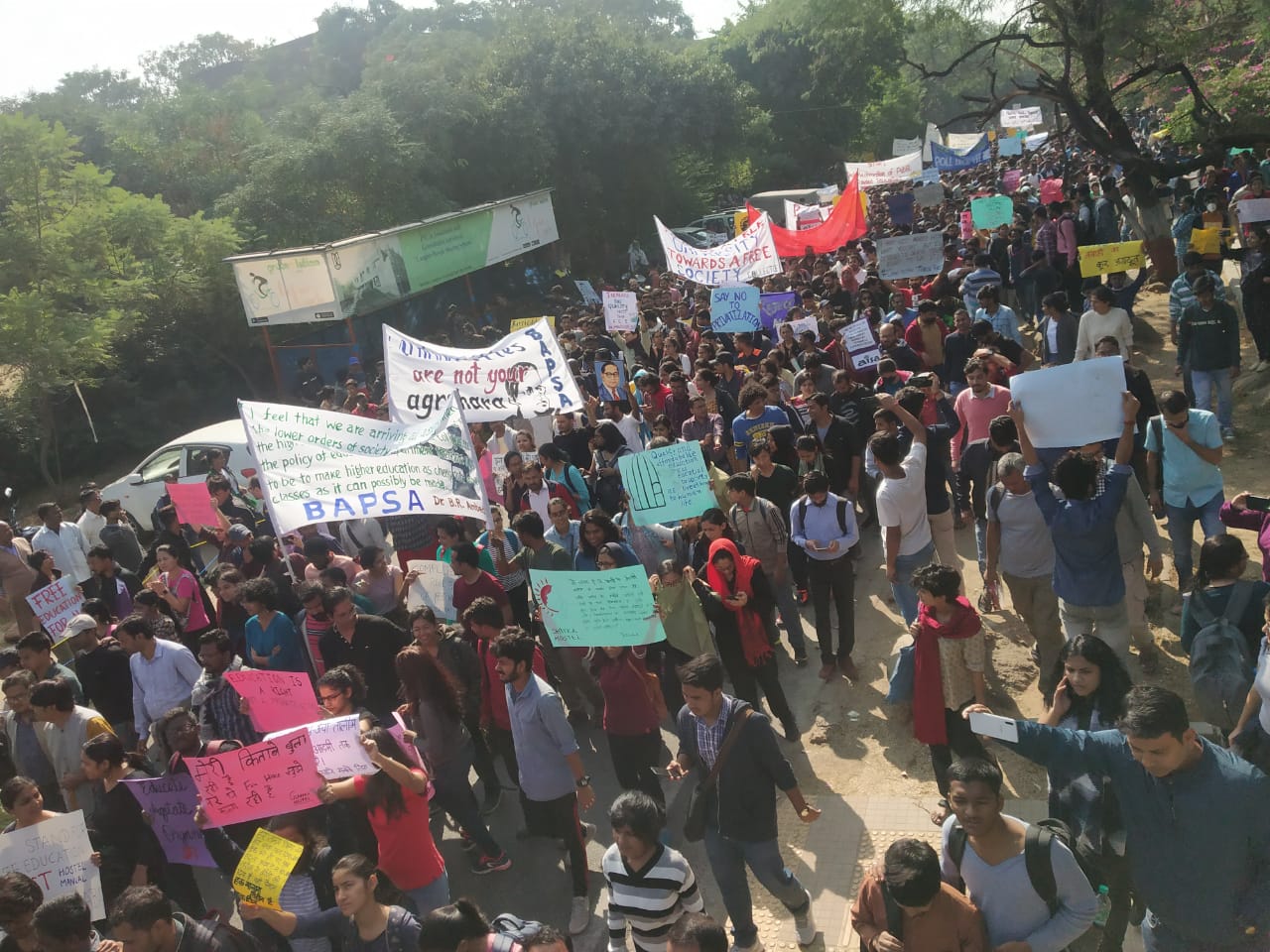 Large protestst have broken out at Indian universities in the last period / Image: PeoplesDispatch

The Modi government’s slashing of higher education budgets has forced institutes to take bank loans from Higher Education Finance Agency (HEFA) instead of state grants from the University Grants Commission (UGC), with the central government providing interest subsidies. But these loans are to be paid back to the banks at some point by the universities. The burden of these loans falls to students and employees. Ruthless regimes of attacks upon students and staff were accelerated after the launch of the loan scheme last year. Universities are given free rein to start any programme and courses they wish; bypassing all regulations and oversight by government education authorities, including the UGC. Furthermore, universities are given a free hand to accept funds from the private sector and, in return, make the institute’s infrastructure and resources available to companies for profit. Also, universities are invited to draw up all manner of casualised employment contracts with teachers and staff, including short-term and zero-hour contracts.

These measures have opened the door to the massive privatisation of universities through both the front and backdoor. Universities not only raised fees for future courses, but existing ones. Every important area of university infrastructure is leased or rented to private businesses, from hostel accommodation, to catering facilities, and even renting lecture rooms to private education providers has become the norm. As a result, in the last five years, India experienced a skyrocketing of university and college fees. It has become impossible for working-class families to pay for higher education for their children. Many working-class families cut all corners of their savings and life earnings to educate their children so that they may be able to get a decent job. However, the job market is equally grim—Indian unemployment registered at a 45-year high in 2019. Industrial outputs from eight major sectors fell by 5.2 percent: the worst figure in the last 14 years. After COVID-19, economic growth is nosediving. India was once considered as among the fastest-growing economies in the world, but it registered its slowest growth in the last six years, to a level of 3.1 percent. This was the pre-COVID-19 situation: now, things are much worse. Amid the pandemic, by the end of this academic year, millions of Indian graduates will enter a market wracked with huge unemployment. And the employment situation abroad is no better.

Exploitation of students and staff

The casualisation of teachers and other members of staff impacted not only new recruits but also regular employees working for decades in colleges and universities. Job losses, reduction in salaries and non-payment of salaries were met with massive protests across all the major states. Delhi University (considered a premier institution in higher education) saw 4,000 teachers and other staff members going on hunger strikes in April 2019 over the non-payment of wages. The same situation existed in other universities across India. Similar protests were held in March 2019 in Punjab, including Punjab University, over salary issues. This February, major colleges and universities in West Bengal experienced huge protests over pay and conditions. Just before the COVID-19 pandemic, almost all states in India experienced teacher and staff protests over pay. Now, with the COVID-19 hitting hard, colleges and universities are planning job and salary cuts of up to 30 percent. Higher education teachers are being forced to take online classes, having not been provided adequate training or ensuring necessary IT infrastructure for either teachers and students.

Under Modi’s government, the impact of marketisation of education was met with immense student movements. It also changed the landscape of student politics in India. Student politics was considered a career. Traditional student leaders, in cahoots with local politicians, businesses and mafioso, were involved in all sorts of criminal activities, including extortion, kidnapping, robberies, land grabs, assassinations, drug dealing etc. Several of them are brutally injured or even killed in rivalries or encounters with police.

However, with the recent radicalisation on campus, the majority of Indian universities experienced a surge in student movements and brought genuine class fighters to the forefront of the unions. This year and last, in the pre-COVID-19 period, India experienced major student movements in universities such as Jawaharlal Nehru University, Jamia Millia University, Allahabad University, Jadavpur University, Osmania University and Hyderabad University, over issues of state oppression and fees. An initial outburst of this radical mood that had accumulated over the years occurred during the recent protests against the Indian Citizenship bill in all major campuses across India.

These student protests happened outside the framework of political parties. Right-wing major parties such as Bharatiya Janata Party, Indian National Congress, Trinamool Congress and Samajwadi Party failed to address any concerns of the students over the years. They are all responsible for the declining condition of education in the country. Even the communist parties failed to provide a proper revolutionary solution to the crisis and always covered themselves in petty, parliamentary politics by aligning with one right-wing party or the other, with the ultimate aim of electoral victory. In this process, which has continued for decades now, they betrayed workers, youth and students many times. These electoral tactics have only helped to strengthen the illusions in bourgeois democracy and the capitalist state which has now entered a period of senile decay. In its decline, the Indian state is brutally attacking the working class and has thrown away its veil of public welfare and wellbeing to show its real, ugly face.

Inequality is at a historical high in India. The Indian constitution, democracy and so-called independent judiciary; and even the fight for secularism, cannot stop the immense flow of wealth to the rich while the poor suffer a massive decline in their living and working conditions. It is the basic character of capitalism, whether in India or anywhere else, to amass wealth, prosperity and luxury at one pole of the society, while hunger, poverty, disease and misery accumulate at the other.

All this has led to a seething anger and hatred of the regime among the students and workers across India, which has also expressed itself in countrywide mass movements and general strikes. It is time to unite all these movements under a programme for the socialist transformation of society. Communist parties in India have always tried to reform capitalism and have limited the political debate around the bourgeois constitution, democracy and within the framework of the existing system. It is important now to go beyond this limited debate and put forward a programme for the revolutionary overthrow of Indian capitalism on the lines of the Bolshevik Revolution in Russia of 1917. This is the only way forward for the Indian masses, and the only way to end the oppression, looting and plunder by this bloodthirsty system.

Indian workers, youth and students today are looking for a genuine revolutionary alternative. It is time for India’s radicalised youth and students to organise themselves under the revolutionary banner of genuine Marxism and prepare for a socialist revolution in India. This would ultimately spark revolutions in all neighbouring countries, such as Pakistan and Bangladesh, which are separated with artificial geographical boundaries, to develop a socialist federation of the Indian subcontinent.